Language
NI has come up with whole new way to perform and produce with Maschine and it's got some clever tricks up its sleeve. We couldn't wait to unwrap Maschine Jam'¦

I have often thought of Native Instruments as a company that Apple might one day try to buy should it ever choose to refocus its efforts on pro audio. That’s unlikely, largely because Apple’s focus is elsewhere these days, but NI and Apple share many characteristics. They make software and hardware, and tightly control both to provide a unique user experience that is otherwise difficult to achieve. They both have a laser focus when it comes to developing products. NI knows its customers are either producers, DJs or beatmakers—although many people tick more than one of these boxes. 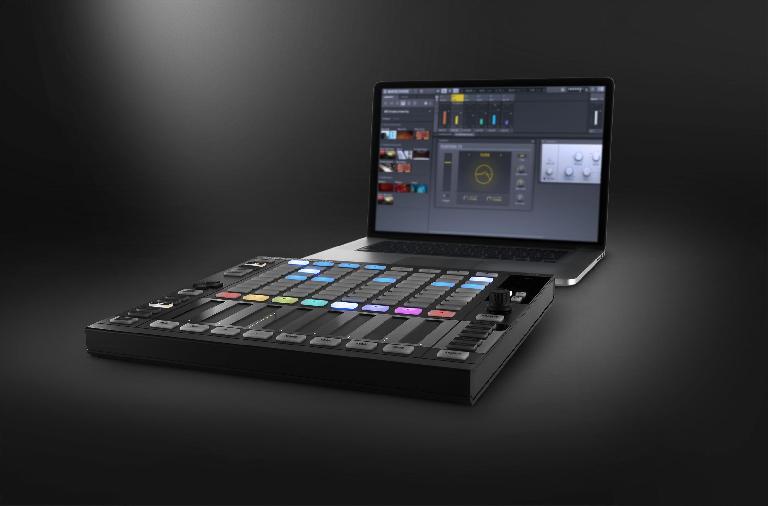 Maschine Jam is the latest hardware in the Maschine series and the first that starts to move into pure controller territory, as opposed to being an instrument with controller features. The company calls it “a modern production and performance system for intuitive sequencing and track building” and although it can be used as an instrument, sequencing is at its heart. It works with the Maschine software (the latest update is required) and scripts will be released to allow it to control Ableton Live and Logic Pro as well as other DAWs and software. As with all of NI’s hardware the Controller Editor application can be used to set up custom maps which you can flip between, meaning it’s also very flexible as a more general MIDI controller.

Build quality is, of course, up to NI’s usual excellent standard and the only connectors are a single USB port to transfer data and power, and a foot switch input socket. A Kensington lock port can be used to secure the box, and a stand is included to raise the unit up for live performance. At this point in the game, NI has huge experience of developing these kinds of devices. The interface approach here is similar to other Maschine hardware, though obviously Jam has its own particular strengths. 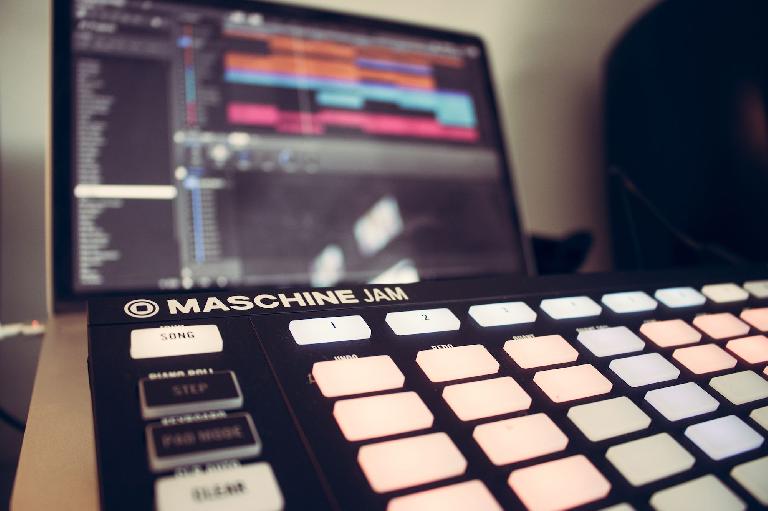 Maschine JAM has its own strengths over Maschine Studio.

What I’m not going to do is exhaustively list all the features. Firstly, because there are a lot of them and secondly because NI does a great job of this already on its website. I’ll talk instead about what you can do with Maschine Jam and how successful it is in letting you do it. The 64 illuminated step matrix buttons are at the core of controlling the Maschine software, whether it’s programming beats, melodies, basslines or sequencing clips into songs. In different modes these correspond to the same piano roll, MIDI grid or song views that you get in the software and the same information is mirrored using the lights.

The lower right-hand quarter of the grid area has 16 numbered pads and these can be used to select sounds or instruments within a project. Next to it is a touch-sensitive rotary encoder that opens various browsers: instance of Maschine, project, effect, chord and so on. Every time you need to switch between settings for a particular function (like changing the chord type or picking an effect), you can do it from here rather than having to go back to the computer. Just like in the Komplete Kontrol hardware, this works fantastically well and quickly becomes second nature.

The Shift key accesses lots of secondary functionality on the hardware, including a row of functions along the top like undo, redo, quantize and tuning. Along the base are transport and tempo controls and combined with Shift these also become alternate functions. There’s a moderate learning curve if you are new to NI’s way of doing things but after a fairly short time, muscle memory kicks in and you will be zapping between functions almost without a second thought. The lights and color coding help here too, of course. 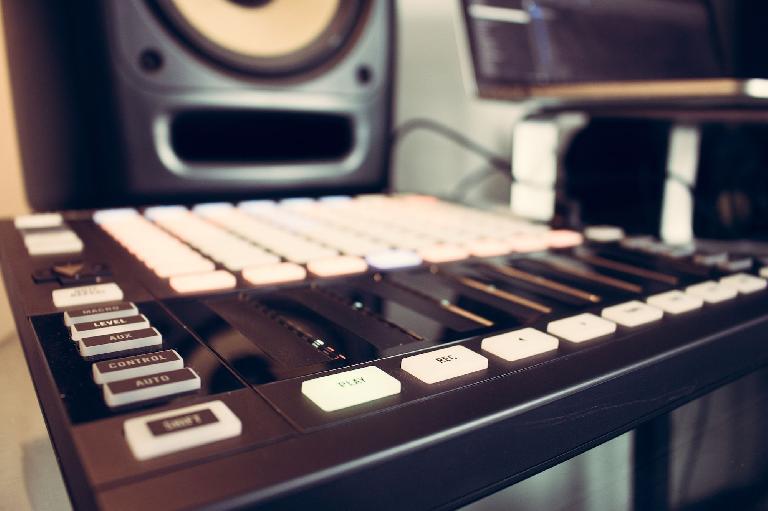 The smart strips are multifunctional and very useful.

The other really cool feature of Maschine Jam is the eight touch strips which NI calls “smart strips”. These aren’t just touch sensitive but dual-touch sensitive meaning you can use two fingers per strip for advanced control. With their color-coded LED lights, these strips change their function depending on the mode you are in. So in Level mode they are faders for each part, in Aux mode they control aux sends and in Auto mode they trigger automation. Control and Macro modes allow additional forms of interaction with effects and other parameters. Amazingly, the strips also let you input notes, dragging up and down instead of using the pads.

Although Maschine Jam doesn’t have the larger pads of its siblings, it’s still a powerful sequencing tool: using the keyboard mode and arpeggiator you can make chords and complex patterns. As well as step sequencing you can live record beats and notes, quantize or humanize the results and then edit, copy, paste and start to build scenes into songs. NI’s technology helps you in other ways too: you can edit scales and note lengths, use the variation engine, control multiple parameters at once using macros and control effects on the fly. 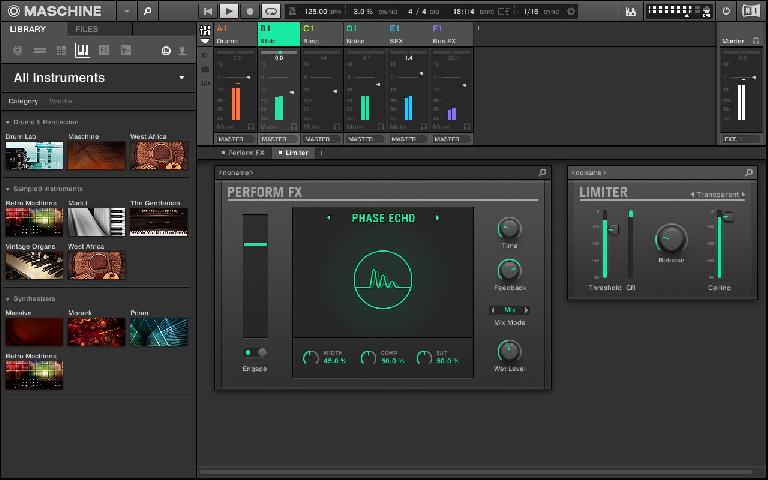 You get Maschine’s 8 GB sound library, of course, but also five monophonic drum engine modules built specially for Maschine. The eight exclusive Perform FX are designed to work with the touch strips and add an incredible new dimension to live performances. You even get Komplete Select, comprising 11 great instruments and 24 effects. The Maschine software runs standalone or as a plug-in, and lets you drag and drop sequences directly into a DAW.

Maschine Jam is a fascinating and powerful new take on controlling Maschine. Surprisingly quick and easy to learn, it nonetheless has a wealth of features to offer and will become compatible with even more third-party software as time goes on, thanks to its programmable MIDI maps. Beautifully integrated with the Maschine software, unique tools like the dual sensitivity touch strips bring a new dimension both to performance and programming.

Although the grid of buttons might initially look designed mainly for sequencing notes or clips (which they do admirably), advanced chord and arpeggiation features are available too. Probably the most fundamental difference to the other Maschine hardware units is that here you get the ability to sequence multiple sounds at the same time directly from the hardware. Plus it doesn’t control things like software sampling and editing like Maschine Studio does. However, considering the fun and flexibility on offer, the programming and controller power, bundled content and expandability via MIDI mode, Maschine Jam is my new favorite way to work with Maschine.

Cons: No control over sampling, if that’s important to you. No hardware MIDI out port.