East and West coast synths traditionally have their own approach and sound, but how about a 0-Coast design? Rishabh Rajan decodes this unique semi modular synthesizer.

It's the year 2017, anyone can be President and anyone can own a modular synthesizer. Back in October of 2015 when I reviewed the Mother 32, I said Eurorack manufacturers will have to reconsider their pricing structure to compete with the Mother 32. Make Noise has done even better by introducing a complete semi-modular system at a price point that’s even better than what Moog did with the Mother 32. The Make Noise 0-Coast is a highly affordable introduction into the world of modular synthesis and in this article we will see what it provides.

It has long been understood that any synthesizer manufacturer that follows in the steps of Robert Moog and designs synths with a subtractive synthesis engine (oscillator - filter - amp) will will be part of the east coast design philosophy. Robert Moog’s company was initially established in New York (east coast). On the other hand, any manufacturer developing synths that followed Don Buchla’s designs took on a west coast design philosophy. West coast synthesis involves using wave shaping to create more complex tones out of simpler waveforms. Don Buchla was based in Berkeley, California, hence west coast. Make Noise who have mainly been known to create west coast style Eurorack modules and systems, have now created a coast-independent system in the 0-Coast. In other words, borrowing from both coasts to create a unique yin / yang of synthesis which personally I feel leans more towards the west. 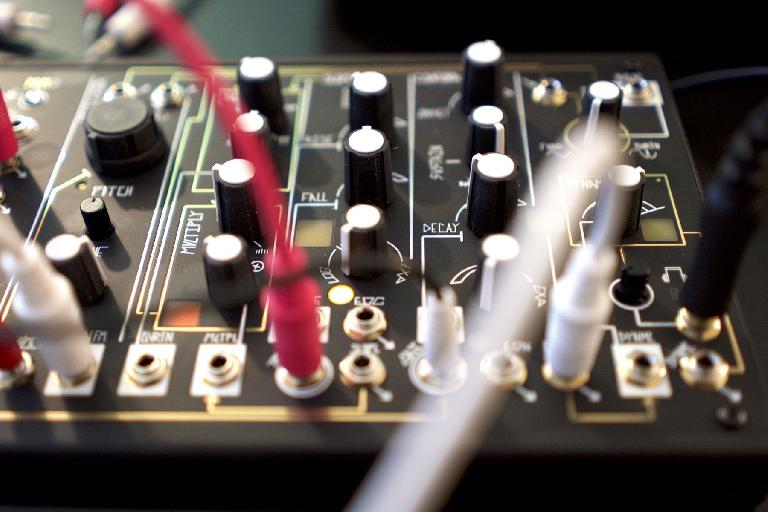 Ancient symbols... actually, no they're not.

The 0-Coast is a single voice patchable system. The design is semi-modular, meaning you can use it as an expressive, musical monosynth. It has MIDI input via a 5-pin din to 1/8inch cable, making it easy to play it with a keyboard controller just like on any east coast designed synthesizer. On the other hand, you can get more scientific using the included patch cables and create a system that drones or generates sounds without any MIDI input. The 0-Coast is compatible with the Eurorack standard so it is very easy to integrate with existing Eurorack modules. There are 27 patch points (13 sources and 14 destinations), a program A & program B switch that has access to additional functionality like an arpeggiator for the incoming MIDI, additional LFO, velocity, portamento, Mod Wheel functionality and more.

The controls on the synth are not very common especially if you approach this from a subtractive synthesis perspective. Make Noise is known for their unique approach to labelling and strange font choices. But once you get the hang of how things work, you will look past the labelling and it will feel good to be part of this niche group of weird noise makers.

If you look carefully, the synth is separated into different sections by white lines, and gold lines are used to indicate how the signal flows from one section to another. 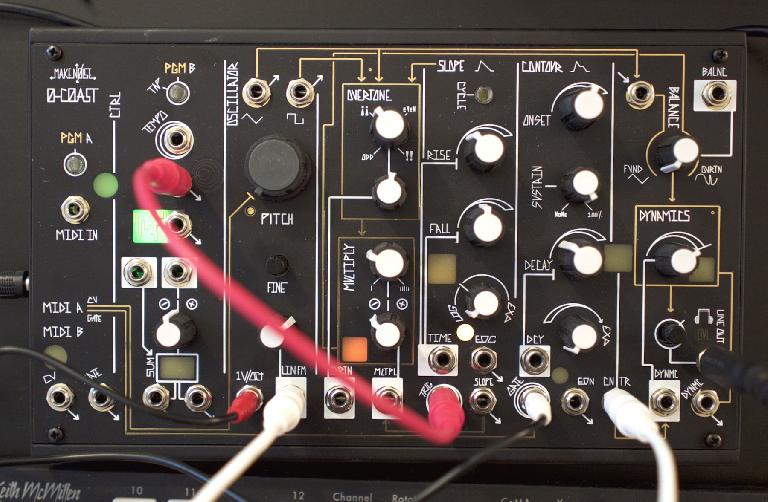 The leftmost section is the control generator section, with MIDI controls, clock output and even a random stepped voltage generator. The next section has controls for the oscillator. You get a big dial for pitch control and a smaller dial for fine tune control. You get two waveforms, a triangle and a square. There is a standard 1v/oct pitch control input and also a linear frequency modulation input with an attenuation control for this modulation.

The next section is what you would see on a typical west coast style module. There’s an Overtone and Multiply section. In the Overtone section, the square waveform is used to add harmonics to the triangle waveform. This by itself might sound subtle but when combined with the Multiply section which creates additional overtones can create a more harmonically rich waveform. Both the Overtone & Multiple section can be CV controlled. The Multiply section has an attenuverter, so you can attenuate and invert the incoming voltage used to modulate it. 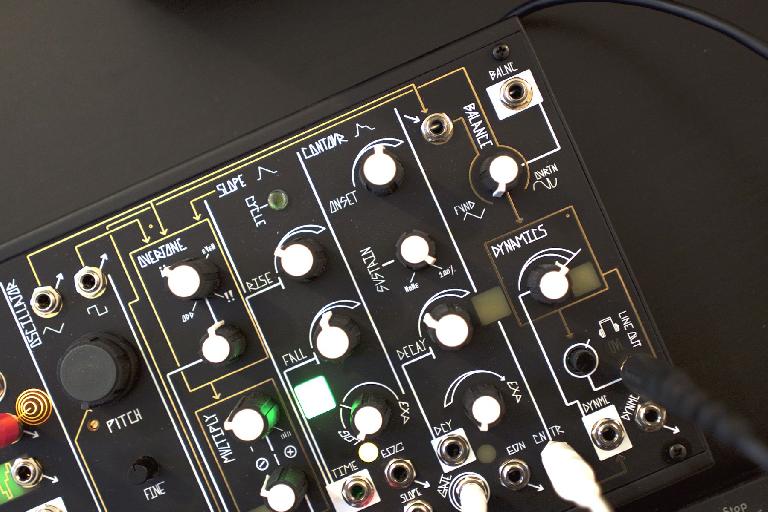 Turn the knobs... you know you want to

Right after the wave shaping section is the Slope module which is very similar to the Slope seen on the MATHS module from Make Noise. It's essentially an envelope generator which can be set to cycle mode with the switch of a button, thus making it an envelope or an LFO. There is a curve control which can make the Slope exponential, linear or logarithmic. If no signal is input to the CV inputs on the Overtone & Multiply section, the Slope is internally routed to those connections.

The Slope on the Multiply section can be quite easy to notice but on the Overtone section you will only notice it coming into play when the Overtone dial is set anywhere from 1 to 5 o clock. There is a Time CV input which controls the Rise and Fall time of the slope simultaneously. There’s a Trigger input which can be used to trigger the Slope when not in cycle mode. There’s a generic Slope output that can be used to modulate anything and there’s an End of Cycle (EOC) output that can be used as a square or rectangle shaped modulation generator when Slope is in Cycle mode.

After the Slope comes the Contour section. This is slightly more familiar ground as what you get is essentially an envelope with attack, sustain and decay/release controls. Similar to the Slope, you get a dial to adjust the Contour towards exponential if required. Other than the standard Contour CV out, there’s a Gate input which is by default receiving from the MIDI input but this can be overridden with any CV gate signal. Of all the time controls, only the Decay can be externally controlled via CV. There is an End of Onset (EON) CV out that can be used to trigger events after the onset of the Contour. 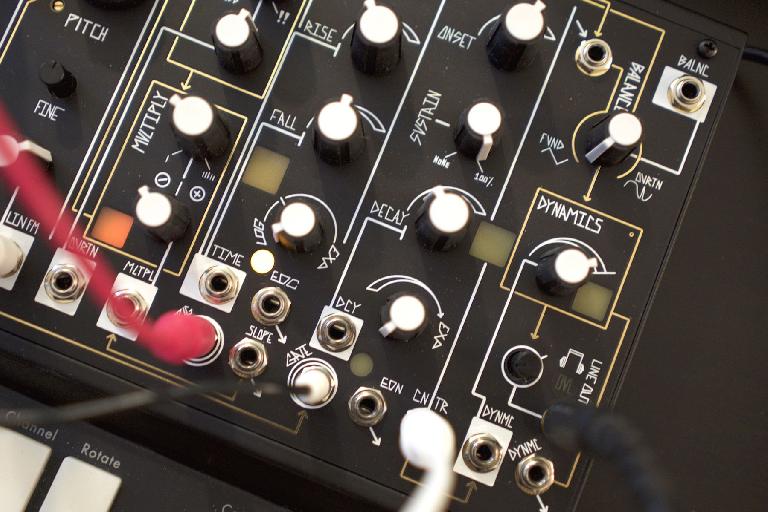 Neither east nor west coast but somewhere in the middle

Lastly there’s the output section. You get a Balance dial to mix between the fundamental (Triangle) and Overtone section. There’s also an audio in to replace the fundamental source. Below that you get a Dynamics section that is essentially a Low Pass Gate circuit. Turn this dial anti-clockwise to soften as well as darken the overall sound. The contour generator is controlling this gate but any CV signal can be used to override that. Finally there’s a headphone out as well as a Dynamic out which is a modular level audio signal. Never connect this to your headphones or speakers, as it is meant to be a much higher voltage and only useable by other modular systems for processing or controlling other modules.

Sonically this synth has a very unique palette, especially when you compare it with east coast synths like the Moog Mother 32. You don’t get that smooth milky tone of a filter opening up on a sawtooth waveform: you get a much harsher but also richer tone especially when using the Multiply section. The envelopes are fascinatingly snappy. Aggressive tones are easy to create but with the multiply section toned down, you can create some really smooth tones as well.

If you already own a Mother 32, the 0-Coast is a great companion as it sounds very different. If you don’t own any analog modular synths, the 0-Coast might be a better buy than the Mother 32 considering it has a much wider sonic palette and is cheaper. It's far more compact than any other modular synth on the market that has this many features and integrating it with an existing Eurorack modular setup is easy. The only issue is that it can’t be placed in a Eurorack case and must be placed on a desktop. Either way, Make Noise has a winner on their hands with the 0-Coast.

Cons: Works only as a desktop unit. Can’t be placed in a Eurorack case

Watch the Make Noise 0-Coast video course in the AskAudio Academy and see and hear what all the fuss is about.
Synthesis 101
The Filter
by Bob Moog Foundation