Once again there’s exciting news from Elektron. At NAMM 2016 Elektron unveiled their latest update to Overbridge (Public Beta 1.10) and OS 1.22 for Analog Keys, Analog Four and Analog Rytm. The list of enhancements is a lengthy one and I want to share how powerful some of these additions truly are. 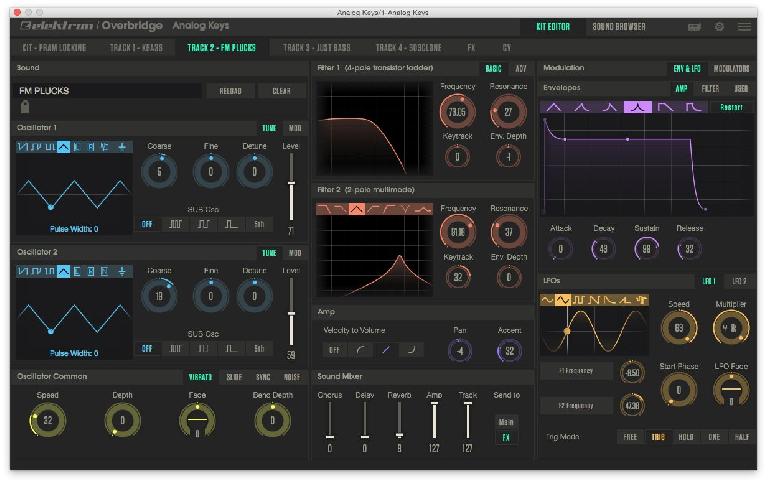 Relevant to Analog series owners, there are powerful OS updates for all machines… Analog Keys/Four and Rytm. Some of the features are tied to Overbridge 1.10 while others enhance the hardware itself.

Note: It’s worth mentioning that all of these updates are free and available for immediate download on the Elektron website.

Undoubtedly, Elektron sequencers are some of the most advanced on the planet… a big contribution to why they are so popular. The new OS 1.22 takes Analog Keys/Four and Rytm sequencing to the next level. How is this even possible?

One of the caveats of step sequencing is the inability to vary triggers automatically within a set pattern. Unless you’re punching in and out steps manually, programed symmetric patterns often sound redundant as they simply loop over and over again until changed. Such aforementioned functionality has a tendency to make programming predictable and static, especially when using shorter loop lengths (i.e., 4 bars compared to 16).

The predictable becomes less predictable if algorithmic variations are programmed to happen periodically. What if there’s a way to add additional notes and/or parameter automation that doesn’t happen each iteration but instead occurs a percentage of the time based on a probability ratio or a specified number of pattern iterations? This optimal feature is exactly what Elektron is now providing with these updates.

The sequencer note condition options are vast and span from being predictable to random based on the modifier of choice… there are 64 different settings which are available via parameter locking. Each setting is a condition that will decide whether or not the sequencer note should be triggered.

These conditions are not limited to individual tracks. Neighboring tracks can also trigger variations to happen or not happen. For example, say I have a bass hit that occurs once out of every three sequence iterations. When the bass hit triggers, I can use it to mute or activate the neighboring kick on the same step of an adjacent track.

Additionally, Analog users will enjoy the new Fill Mode that plays back trigs (set to Fill) for one pattern iteration when desired. Fill Mode will activate when the pattern loops and remain active until it loops again. It is also possible to momentarily activate fill mode by pressing the [SCALE] key when not in grid recording mode. The fill mode will then be active for as long as the key is being held down.

Note: A full list of conditions is available in the Analog Rytm/Keys/Four OS 1.22 read-me PDF included with the OS updates.

Analog Rytm owners all over the world are ecstatic to learn that we can now record retrigs in real time via the sequencer. Moreover, micro timing and velocity is now updated when you replace a note when live recording. This admittedly was one of the top feature requests on my, and many others, wish list. Boom!

Also included in the new OS updates, Analog series machines get new LFO synchronization modes. The Analog Keys/Four rings in at 36 and the Rytm gets 24 different settings.

Note: The first twelve are the same as before. These select a multiplier of the current sequencer tempo setting.

On the Rytm/Keys/Four, the additional twelve settings (denoted with a dot multiplication symbol) synchronizes the LFO to 120BPM, irrespective of the sequencer tempo setting. This means that you can more easily do sound design with the LFO, as the modulation rate won’t change with the sequencer tempo.

To illustrate, I used a fast 2k multiplier assigned to the filter cutoff frequency and adjusted the LFO pad slope to -21 with a random waveform to create some wacky sci-fi hits. 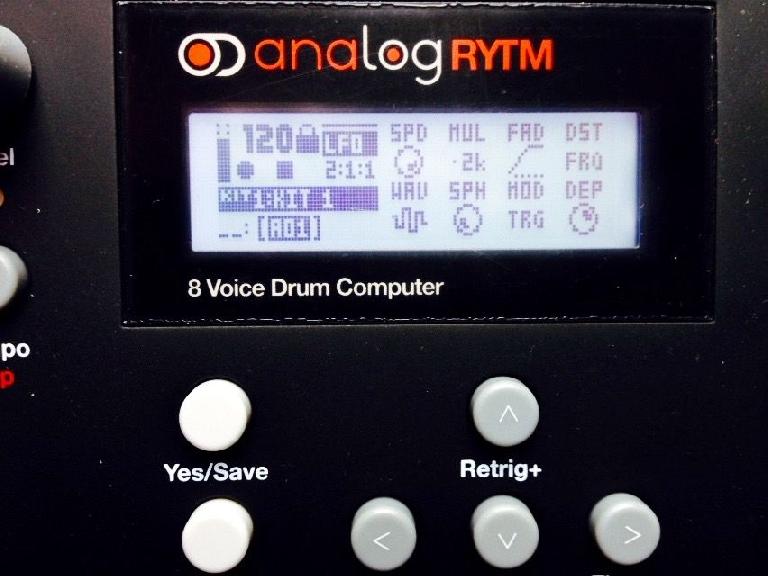 The remaining twelve settings are only for the Analog Keys/Four (denoted with a tuning-fork symbol) that allow synchronization of the LFO to one of the oscillators. This means that if you play a note one octave higher, the LFO will run twice as fast. LFO 1 is synchronized to oscillator 1, and LFO 2 is synchronized to oscillator 2. Three LFO destinations have been added: FM1, FM2, and FMX. These add linear frequency to the oscillators, either individually using FM1/FM2, or to both at once using FMX.

Note: You can download a brilliant, free Mini FM sound pack of 32 Sounds, all steeped in FM goodness for those unmistakable and edgy harmonics.

Overbridge 1.10 has quite a makeover. Combined with the features introduced by OS 1.22, it greatly enhances the depth of the DAW integration for the Analog range of machines. The user interface has received a massive overhaul, with a more refined look and improved usability.

Now users are able to route audio directly from their favorite DAW into Analog machines via Overbridge. This means that you can send any of your favorite virtual instruments and/or effects to the hardware for analog processing. Use the Elektron filters, LFOs, on-board effects and overdrive to shape your sounds to new heights. 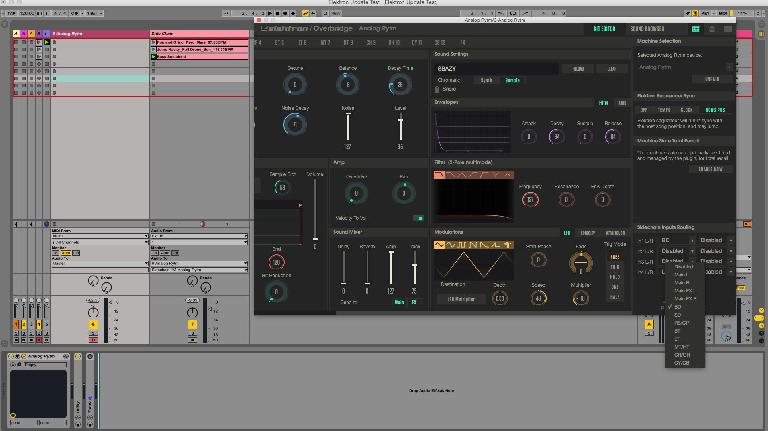 As a fun, quick experiment, I side-chained a sustained, looped bass note to the input of the kick track on the Rytm. Once again, using a random LFO, I routed to the filter frequency using the new multiplier settings to come up with a funky, dirty, gated sequence.

Kick without Side Chain: 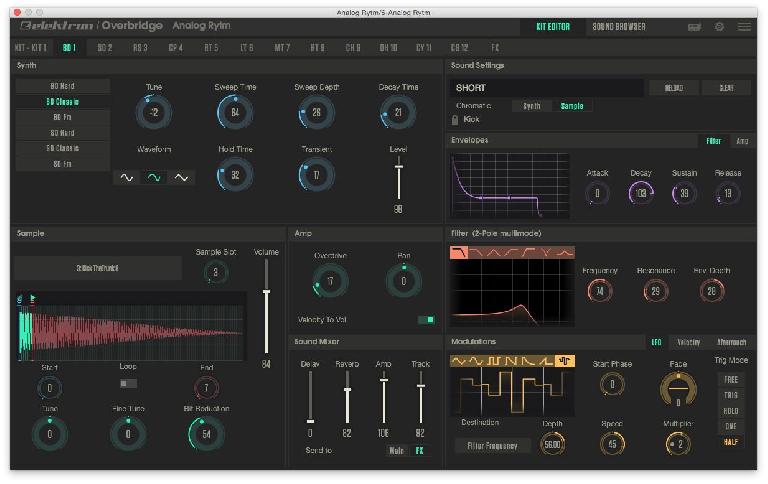 Note: OverBridge 1.10 is still a public beta… I was only able to get the side-chain function working with the Rytm… possibly still a feature in progress for the Keys/Four.

It makes me extremely happy (and a satisfied customer) when companies like Elektron work diligently towards improving pre-existing products with forward thinking new features like these. All too often, gear is released and then forgotten… onto the next new thing. It’s highly impressive to see such continued dedication to improvement. Nothing short of mad respect!

As a final closing point, the OverBridge 1.10 is still a public beta. Although it’s reasonably stable, there are some bugs that still need ironing out. If you’re launching a critical mission and are content with the initial 1.0 release, maybe hold tight for now. However, if you have room for a hiccup every now and then, by all means, dig in!

Re-trigs can be recorded in Live Record mode.

Cons: Overbridge version 1.10 is still a public beta and may be a bit buggy.