SOUND FORGE Audio Studio 12 is the entry-level version of the Sound Forge family, which spans Mac and PC platforms but actually exists rather differently on each. The Mac version is a separate product, recently built from scratch and bearing little resemblance to its PC counterparts. SOUND FORGE Pro for Windows is the “full” version with the longest history, and this version, Audio Studio 12, is the more affordable sibling. It’s a relatively simple wave editor that’s geared towards recording, editing and processing stereo audio rather than multitrack projects.

When I saw the system requirements I had to do a double take – a 1.4GHz processor and 512MB of RAM seems incredibly low when most people are now used to top-end mega-DAWs most of the time. But in truth, not everyone needs all the bells and whistles of Logic Pro or Ableton Suite, and not everyone wants to pay for features they won’t use. There are plenty of people out there on older or lower spec PCs that can’t run heavyweight applications but still need to do things like recording podcasts, cleaning up vinyl recordings and the like. There’s been a bit of an arms race over the last decade in terms of resource usage, so it’s actually a nice to change to see an app that’s not burning RAM faster than you can throw it.

The application itself installs easily and has a pretty small footprint by modern standards. Something that needs to be said upfront is that it deals with mono or stereo recordings and files, one at a time. It’s not a multitracker, and though you can record multiple files and open them in tabs, cutting up and pasting parts of files into other tabs, you’ll be working on a stereo file at a time, which isn’t uncommon in wave editor world. It’s also not especially slick to look at, with an old school Windows style although this doesn’t affect its usability at all. 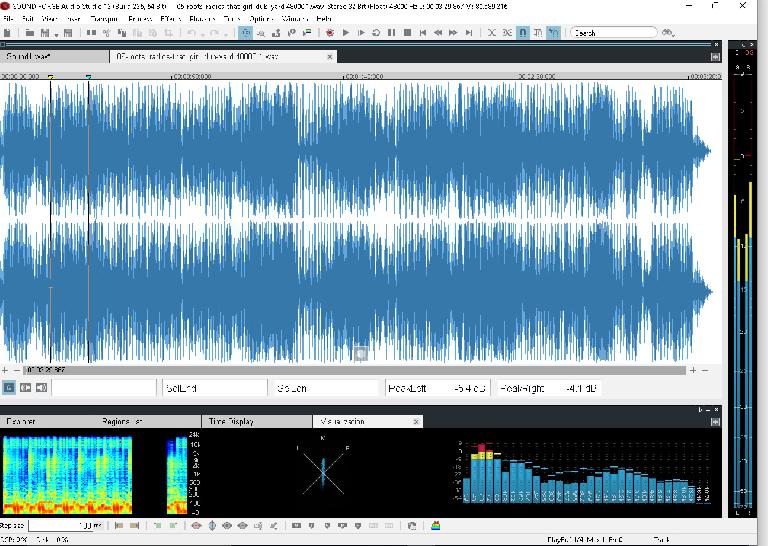 What you get is essentially the core audio recording and editing features of higher priced applications like Wavelab but without the advanced tools and without multitracking. It records audio in stereo or mono at 32-bit / up to 384kHz rate and this new version is based on a 64-bit architecture to take advantage of recent PC technology. As noted, audio files are recorded into tabs and for each file you get a bunch of tools and processes that can be performed either on entire files or selections. There’s all the things you’d expect: fades, normalization, reverse, time stretching and so on. Audio files also have fade handles at either end for easy transitions.

New in version 12 are some wave editing tools and techniques that make working with waveforms easier. Slice Editing means that cuts you make to audio can be tweaked afterwards rather than being permanent, a bit like clips in other DAWs can be re-dragged after editing to reveal more source material if it exists. Soft Cutting creates automatic, user-adjustable crossfades with each edit to guarantee smooth transitions between cuts with no pops or clicks, which is a nice touch. These are both especially helpful given that editing together different clips using a single stereo track necessitates a lot of crossfading, since you can’t rely on using multiple tracks. You can add regions within audio files too. One of the things you may be using it for is digitising old tapes or vinyl, and to this end as well as support for all your VST plug-ins, the app provides an Audio Restoration toolset comprising declickers, hum removers and the like – 5 in total. Again their interfaces are a little clinical – no flashy graphics – but they do the job and you won’t have to spend extra on third party restoration plug-ins. Pitch change is also available via the Elastic Audio Editor and perhaps surprisingly there’s also spectral editing via the spectral view, so you can identify and clean up sounds from inside a waveform instead of the imperfect alternative of trying to do this using EQ. There are also over 20 bundled audio effects like compression, reverb and similar models that you use every day. 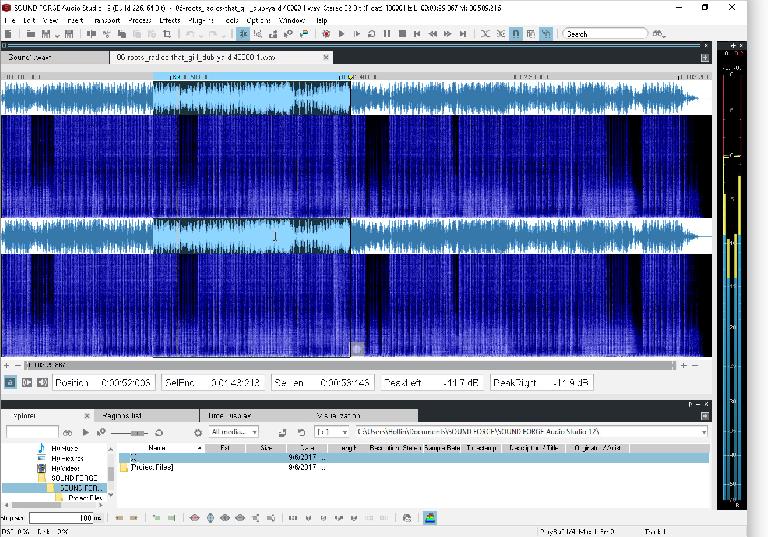 A nice addition is the inclusion of iZotope Ozone Elements, a dedicated mastering processor that runs as a plug-in. Although cut down from its bigger brother, this still comes with some great presets for sweetening and boosting your audio prior to export and will certainly help you achieve a more solid, consistent level for whatever you produce. 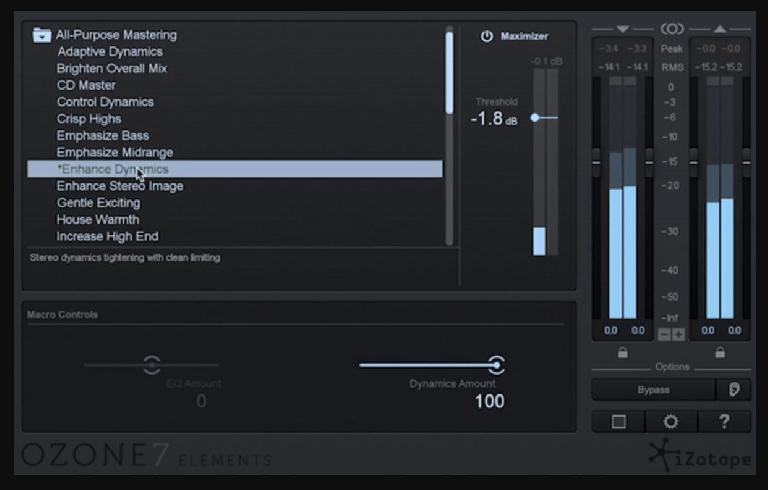 The app features video support too so it’s possible to open video files, clean up or process their audio tracks and then export without re-rendering, saving time and preserving quality. There are advanced meters – 9 in all including spectroscope, oscilloscopes, correlation meter and bit meter, so you can really get a good idea of what’s going on inside your audio. CD assembly with markers is available too (though I wonder how many people really assemble CDs these days) and of course you can export in multiple compressed and uncompressed formats.

SOUND FORGE Audio Studio 12 is a great wave recorder and editor with a powerful set of tools for working with mono and stereo files, cleaning up recordings, tuning up vocals, audio analysis and more. Many of the things people do with audio like podcasting, digitisation of old sources or simple voiceover recording don’t actually require a full-blown DAW and in fact one of those can be a distraction. Plus, they tend to focus less on audio editing than on MIDI and instruments. Here, the focus is very much on honest-to-goodness editing, analysis and processing, with the waveform as the star. 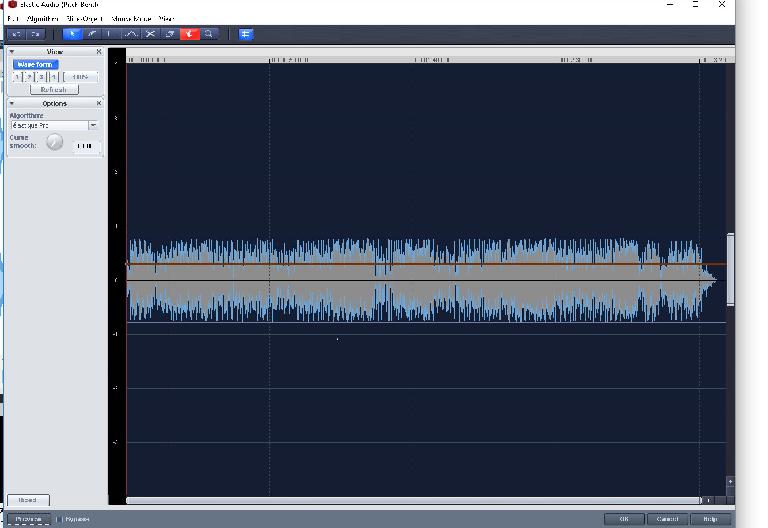 The one-file-at-a-time approach is still relatively common with wave editors, even though it seems restrictive to those of us who spend most of our time in DAW-land or working in video editors. Nevertheless it is perfectly adequate for many users working not with music tracking but with fewer sources. The Pro version of Sound Forge supports up to 32 channels, if that’s a deal breaker for you. If your needs are more modest or you’re on a budget, this application will serve your editing and processing needs more than adequately. A free 30 day trial is available from the website.

Cons: Not a multitrack environment if that’s what you were looking for. A bit clinical to look at.

Learn more about mastering and audio editing with hundreds of video courses in the AskAudio Academy here.