Language
Better known for modular style instruments and an OSC controller, Madrona Labs are now entering the audio effect world with Virta. This plug-in takes the concept of vocoding and turns it on its head!

Tucked away in the temperate coastal rainforest of America’s Pacific Northwest, Madrona Labs has been quietly innovating with a series of unique virtual tools—and their stylish Soundplane OSC controller. Built on the intuitive modular format of their Aalto and Kaivo instruments, Virta is Madrona Lab’s first foray into the audio effect domain, taking vocoding principles to a new level via sound-controlled synthesis—and a wide array of transformative opportunities.

Swimming With The Current

Named after the Finnish word for “current”—both fluid and electrical—Virta’s clean, minimalist interface should be familiar to users of other Madrona products, as it employs the same scalable, vector-based GUI. Along the top is the patch navigation area, which, when clicked, opens a menu of typical patch saving and browsing commands, along with the handy option to copy and paste patches to the clipboard; at far right is the settings menu for adjusting MIDI and OSC input control.

The main guts of Virta, much like Aalto and Kaivo, is comprised of three areas: sources along the top, including Key, Audio, LFO, OSC 1 & 2, and a basic Envelope; the Patcher section in the middle which allows for extensive modular routing and parameter control; and the audio processors along the bottom, including the vocoder-like Formants section, Gate, Delay circuit, and finally, the Output mixer.

Virta’s clean, minimalist interface should be familiar to users of other Madrona products, as it employs the same scalable, vector-based GUI.

Virta can be run in two fundamental modes: extrapolating pitch and other musical information strictly from incoming audio, or receiving notes sent via a separate MIDI track in your DAW to the Key section for familiar melodic vocoding styles. Before delving into the MIDI-patched vocoding possibilities, let that first statement sink in: Virta can extract pitch and other musical information from incoming audio in real time. This is the sound-controlled synthesis that forms the core concept of Virta. 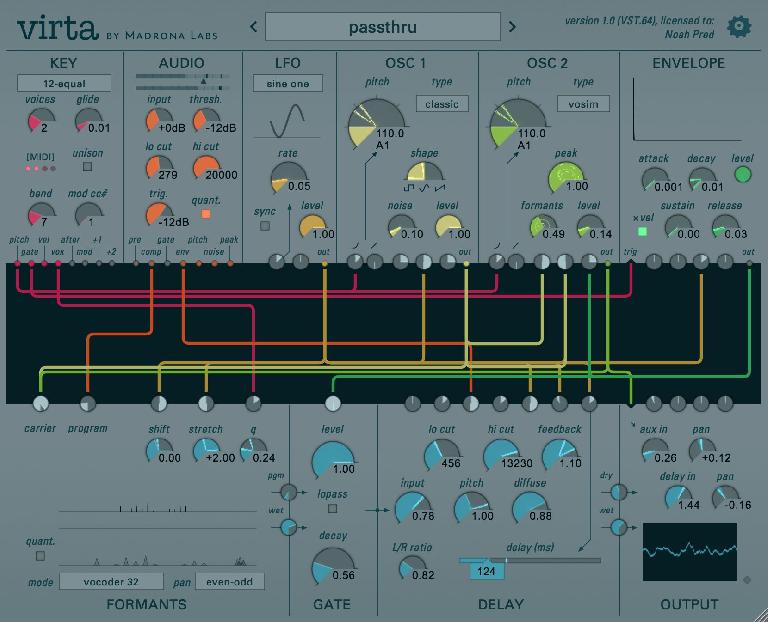 The Audio section starts with Input and Threshold controls for some impressively well-calibrated compression, followed by low and high pass filters to eliminate problematic frequencies, a Trigger level setting for the Gate output, and a Quantize toggle to force the audio to a scale selected in the Key section. The pre-processed level, Compressed level, Gate output, Envelope tracking, Pitch, Noise, and spectral Peak can all be sent as modulation controls to any inputs throughout Virta, via the Patcher. This way, the Pitch detected from the incoming audio can be used as a Carrier for the Formant section for pitch-tracked vocoding—or sent to modulate the Feedback of the Delay segment, or to adjust the rate of the LFO, to name just a few quick examples.

To convey the scope of possibilities here, it’s important to explain Virta’s Patcher: the black area in the middle of the GUI, empty by default, and filled with colored lines once patched. Any available Sources from each module appear as a small circular dot along the module’s bottom at the top edge of the Patcher; parameter Controls available for Source input appear as larger circle with a bipolar attenuator to determine the direction and intensity of the control amount. To patch a Source to a Control, just click the Source dot and drag the virtual wire that appears to the desired Control dial and drop it in; to remove a patch, just click and drag it away from the Control dial and it disappears. All wires are cleverly color-coded to their corresponding Source section to keep easier track of things at a glance.

So back to the Sources on offer. The Key section, when a separate MIDI track has been created with MIDI output routed to Virta, can send MIDI-generated Pitch, Gate, Velocity, and Aftertouch to control the oscillators, formants, or any other section of Virta. The Key section is where you can specify a Scala formatted Scale, determine the polyphony (up to four voices), adjust the Glide time and Pitchbend range, and specify a CC# for continuous MIDI input control via the Mod output. The Vox output also allows each of the voices to send a different value to control for each voice of polyphony, staggering modulations for multilayered textures.

Virta’s bottom third is devoted to audio processors. The Formant section can be set to “traditional” vocoding carrier styles of 8, 16, or 32 carrier bands, or with a modern digital sound at 256 carrier bands.

A single solitary host-syncable LFO comes in eight shapes—a notable shortcoming of Virta, I found myself wishing for more LFOs to alter various controls at divergent rates. A pair of Oscillators can be set to either a classic analog mode with a wavetable that smoothly glides from square to sine to sawtooth along with a separate noise amount, or a vocal simulation mode with a spectral peak cluster and formant level control. A straightforward ADSR Envelop, which can be triggered by the audio Gate or any similarly trigger-like input, rounds out Virta’s modulation sources.

Virta’s bottom third is devoted to audio processors. The Formant section can be set to “traditional” vocoding carrier styles of 8, 16, or 32 carrier bands, or with a modern digital sound at 256 carrier bands. These bands can be stretched across the frequency spectrum or shifted up or down the spectrum, with adjustable resonance via the Q amount. Modulating the Stretch and Shift parameters via LFO yielded some compellingly dynamic tones. For enhanced harmonic conformity, the Carrier signal can be Quantized to a scale specified in the Key section, while a range of intriguing panning options are included, from randomized clumps to even/odd harmonic separation. For classic vocoder usage, one or both of the Oscillators would be patched to the Carrier input, while one of the Audio outputs would be patched to the program input—both of which can then be blent at the Formant output via the Program and Wet dials.

Virta is a versatile audio processor with no direct competitor I’m aware of.

The Gate section can be set to a low-pass mode for bleepy percussive effects, while the pitched Delay section, replete with Diffusion and variance up or down a full octave, begs for modulation. Dry and Wet amounts from the Delay feed the final Output mixer, with an Auxiliary input—useful for blending a raw Oscillator or dry audio signal—is mixed with the Delay input, each with discrete pan controls. Finally, an Oscilloscope is installed at the end of the signal path for real-time visual feedback.

More than just a vocoder on steroids, more than just a re-synthesizer, more than just a novelty effect, Virta is a versatile audio processor with no direct competitor I’m aware of. While the real-time possibilities are tantalizing, Virta’s current CPU-hogging requirements mean that on most systems it will be relegated to offline sound design projects—though that shouldn’t be considered a real detraction. With a range of effervescent, scintillating, and brain-warping results on vocals, drums, and just about any audio source I tried, Virta’s vast realm of sonic transformations opens up a bizarre parallel universe of otherworldly sounds.