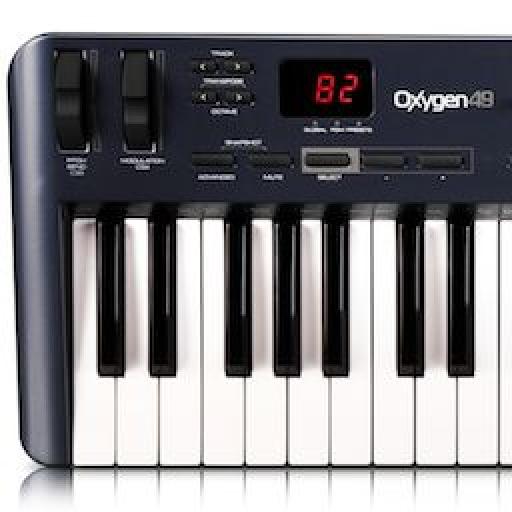 Language
Sturdy, lightweight and portable, the Oxygen 49 MIDI Keyboard Controller by M-Audio is under the spotlight in this review. Hollin Jones puts this on his fast fingers and DAW brain in this test.

M-Audio has been making USB-powered MIDI controller keyboards for as long as anyone, and the Oxygen 49 (introduced in the Fall of 2009 and retailing at £99.99/ $149.99) is one of the more portable models in a family that also contains 25, 61 and 88-key models. It has full size keys which are more playable than you might have thought, and though they're not really designed for playing a symphony, are perfectly good for most everyday studio triggering operations. There's even a sustain pedal input on the rear panel, so you can be more expressive when playing piano and string parts. The USB connection carries data and power but there are no hardware MIDI ports. It's class compliant so requires no drivers.

The Oxygen 49 is portable and lightweight but has a sturdy build.

Most people are fairly familiar with this kind of device and the Oxygen 49 is a standard but solid MIDI controller : a staple of every studio from the smallest to the largest. It's lightweight too and sturdy, so could conceivably be gigged. As well as the standard mod wheel and pitch bend controls, you get eight knobs and nine sliders, which feel robust and well engineered. They are assignable of course to any parameter in your DAW, and the Oxygen family of controllers supports DirectLink mode, which is also known as HyperControl. The idea is that the controls can automatically map themselves to the most useful parameters in your DAW, after loading a template or setting it up as a control surface.  There are also transport controls on the front panel for scrolling, recording, looping and playback.

This is a great idea, but unfortunately some of the DAWs that are supported are somewhat out of date, and newer ones don't recognise DirectLink. According to M-Audio's support page, Live 8 (and later) and Garageband '09 are supported, as is Logic 8 and 9.1 (in 32-bit mode) and Pro Tools 8. Some of these aren't the latest versions but they're not too old. Reason support is stuck at version 4 however, and Cubase at version 5.5, both of which are very long in the tooth now. I tried the auto mapping with Reason 6.5 and it did work to an extent but ignored all the newer devices and the new mixer, as I had thought it might.

Around the back it's as simple as USB, sustain and a power switch.

This isn't to say you can't use the Oxygen with the very latest DAW. You can use MIDI learn in the software and create your own templates and it works just fine. But this is time consuming and the automatic mapping templates need updating urgently to keep this feature relevant. In other regards this is a great controller, with transpose and octave controls and labelled keys for sending MIDI commands, and even the small LED screen manages to be useful. You get a copy of Ableton Live Lite too which is handy, and will get you started if you don't already have a DAW. This might also help to explain why Live support for DirectLink is still pretty good.

The Oxygen 49 is a good controller keyboard that's portable and affordable. It'll be even better when the DirectLink feature is updated to cover 64-bit and the most recent iterations of the leading DAWs.

lostinthesound
Sadly, this has always been the case with M-Audio. They often tout a product with amazing compatibility, yet when one reads the fine-print or FAQs there's always a very limited scope of compatible products or an abundance of limitations. Even with the new "AIR" series, there is not true "DirectLink," the majority of controller assignments must be implemented via MIDI learn. I have found that my SL25 maps quite nicely to Logic and perfectly with Ableton...albeit with the occasional hiccup. Nonetheless, Novation consistently updates its product line with regards to compatibility with 3rd party plugins and DAWs. M-Audio should follow suit.
Rounik
Yes, but the DirectLink mode aside, this looks like a very promising keyboard... and of course, learn mode within your DAW is usually perfectly adequate. Looking forward to seeing DirectLink updated.

Also, to be fair to M-Audio DirectLink compatibility is listed clearly on their website.

Jamie
The real question should be: how will their implementation of this type of automatic mapping change under their Numark masters (in collaboration with AKAI)? And furthermore - will AKAI keyboards start having better automatic MIDI mapping capabilities?