Language
What are the chances of Livid Instruments releasing a new version of the pad controller, BASE, every bit as affordable, playable and life-changing as the original? G. W. Childs finds out.

A few years ago, Base, from Livid Instruments came in to the life of a middle-aged musician’s life and changed his way of working, forever. Walking up the stairs, recently, that same middle-aged musician (though, somewhat more middle-aged) has now encountered a box on the doorstep that comes from Livid Instruments. Lightning strikes in the background as the box opens slightly to reveal an interior ‘Base II’ packaging. But, does lightning strike twice?

It’s within the box, and outside of it, that we begin to see a company with a vision for the future. Livid’s once plain, brown box has now been replaced with a colorful box, complete with pictures and graphics. But, there’s more than a major change in the packaging. Base II is larger than the original Base, in terms of actual size. 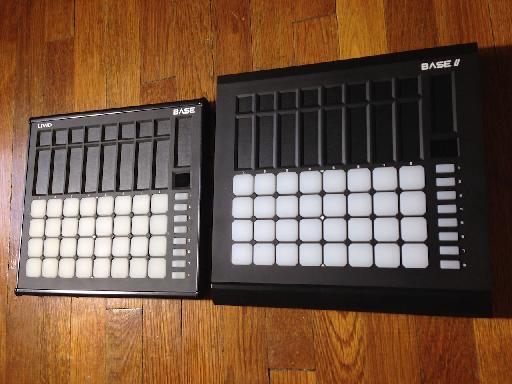 Livid Instruments BASE vs BASE II.

"BASE II has a sleek, solid feel that resembles popular designs going on in industries outside of music."

The housing extends farther out, around the pads. And, towards the southern portion of the interface, there is now a very nice ergonomic slope. This means that there is now a section of the enclosure that will support your wrist, to some degree, while you tap in your beats. Though, what’s incredible is the lack of screws. The new, sleek method incorporated by Livid where in the panels lock together gives us a sleek, solid feel that definitely resembles popular designs going on in industries in and outside of music. 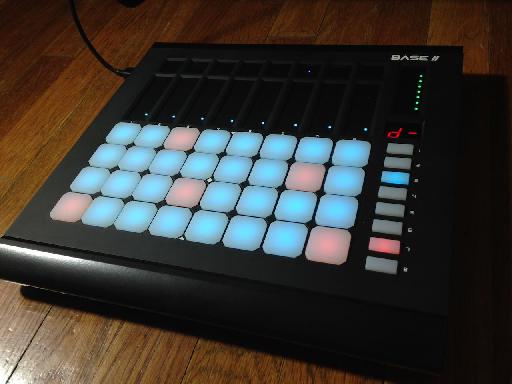 Livid Instruments' BASE II has a sleek ergonomic feel.

As I’ve been living on the go quite a bit, I decided to immediately throw Base II in to the section of my backpack that is usually reserved for the original Base. Even though the device has grown, it still fits in to the same compartment within my bag. Granted, I can’t hold the same amount of cords, and usual debris around Base II, within the same area. Regardless, my laptop and the controller, and my other gear still all fit together well and don’t have me limping like a hunchback once I’ve got the back over my shoulder. The weight is very similar.

Once you’re back in Ableton Live, or whichever DAW you prefer, Base II performs very similarly to the original Base. However, it’s much brighter now. The colors and sheer vibrancy of the pads really do light up a performance. And, if the pads still aren’t bright enough, you can bring in an optional wall wort to make things even brighter. Though, I will say that, to me, things were plenty bright and if you want that club feel in your studio, quickly, just dim the lights in the room and hook up Base II. That sci-fi look you’ve always wanted is quickly yours... Trust me. 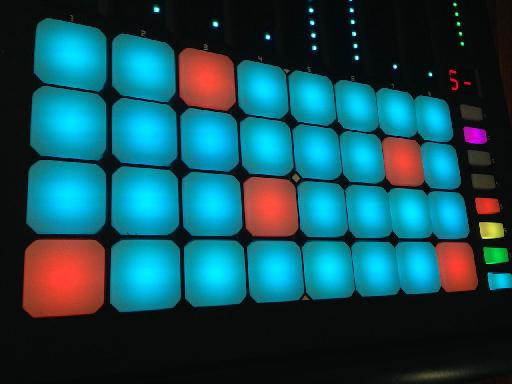 Trun your studio into a Sci-Fi show thanks to the BASE II's lights.

"The responsiveness does seem just a little different from Base I."

The pads feel exactly like Base I... solid. You get the impression that you could pound on these things all night in the clubs for a few years, while dragging Base II to every club across the country and it will still be coming back for more. I will say that the responsiveness does seem just a little different from Base I. But, not enough to really give Base II a ding. Beats can still be pounded out nicely. I even ran Base I and II together at the same time (How could you not?) just to see what it would be like to have that many lights and pads at once. The result is a visual, kinesthetic experience that, within itself, becomes just as much of a show as what’s coming from your speakers. 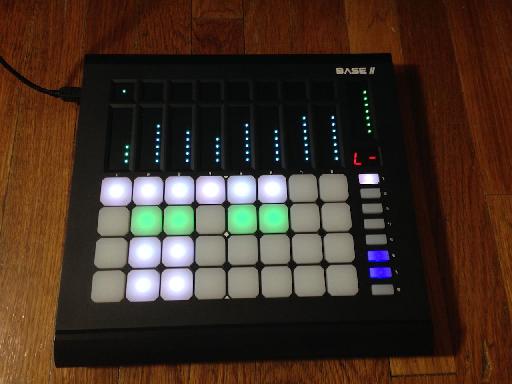 Top down view of Livid Instruments BASE II.

"I had a great time pounding out beats and riding those faders with the incredible ribbon controls."

Livid has done an incredible job with Base II. I had a great time pounding out beats and riding those faders with the incredible ribbon controls that adorn the upper portions of the controller. As usual, you can tell the small company out of Austin is continuing to buck the trends of the industry by giving us a beautifully crafted controller, built here in the US, at a price that won’t break the bank.