Language
Every once in a while something comes along that changes the way we approach making music. Find out why WaveDNA's Liquid Rhythm takes the prize as the most innovative and cool rhythmic generator yet.

There aren't a lot of new ideas these days, when it comes to computer music. This is not to say that there isn't innovation. There's plenty. However lately they often appear in the form of someone refining an already established technology. And, this makes sense. Companies want to go with what will sell, it's hard to justify doing something new, with the amount of time, energy and money that it takes to put something together. And, without a guarantee that the money will be made back, who's willing to take the risk?

Well, thank goodness for young, innovative companies like WaveDNA. They've come up with a product that will be a life changer, as long as you can wrap your head around it. And, if I do my job correctly, not only will you understand it, but you might even shout it from the rooftops... Or, try to make sure no one knows about it. Because, it really is just that cool.

Endless Supply of Rhythm, Anyone? Or, What Is Liquid Rhythm?

Let's start by answering a simple, yet profoundly complicated question, what is Liquid Rhythm?

"Liquid Rhythm is a MIDI drum editor and arranger that can intelligently and capably create and randomize drum beats of its own."

Well, if you were to ask one of the WaveDNA guys, they'd explain that it's a 'Rhythm Generator'. This is true. But, let me make it more clear: Liquid Rhythm is a MIDI drum editor and arranger that can intelligently and capably create and randomize drum beats of its own. This last sentence is the definition I'd like you to focus on, with special consideration to the word 'create'. Liquid Rhythm can actually create its own rhythms. And, those rhythms are very, very useable. 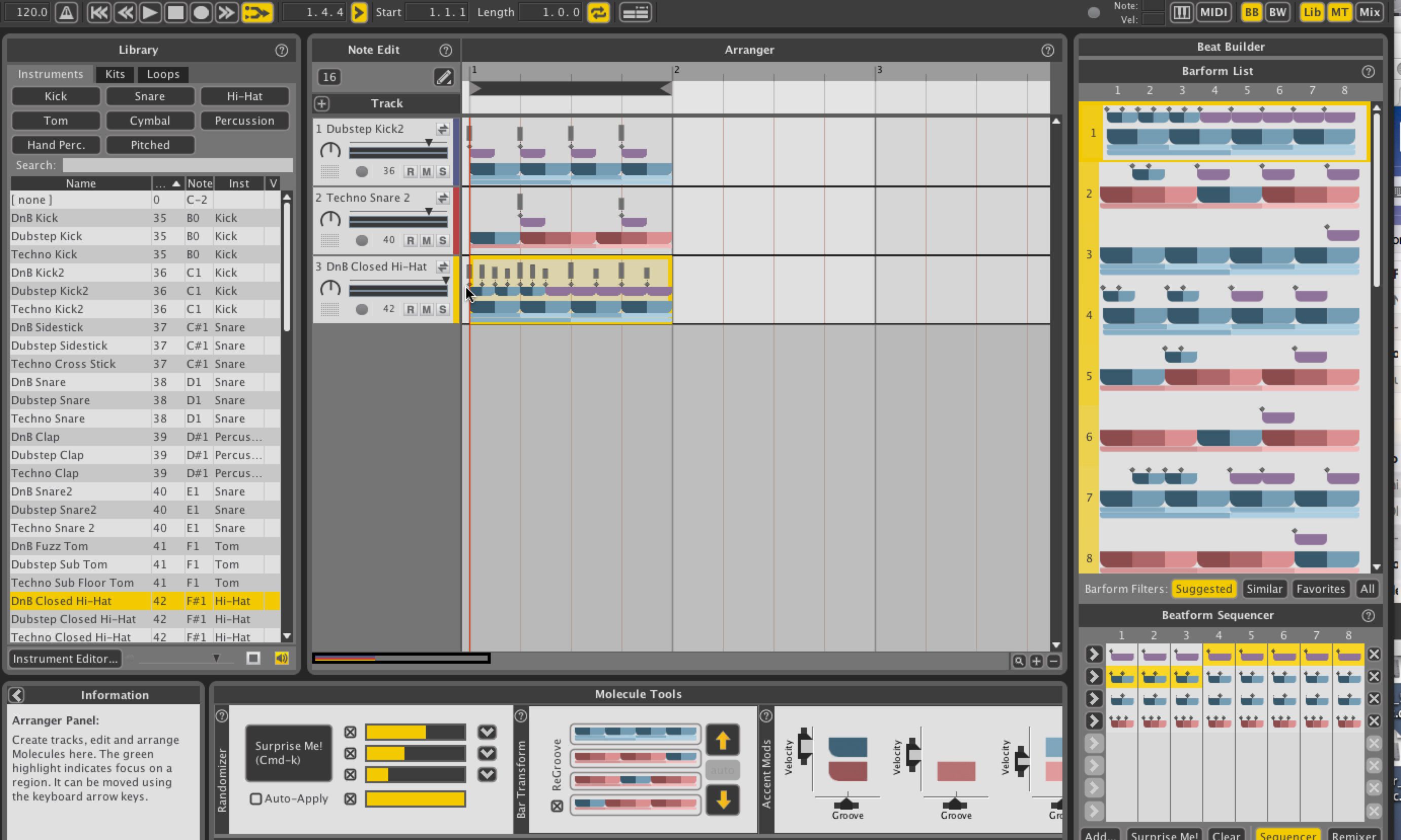 Liquid Rhythm not only creates its own rhythmic parts, it creates very useable ones!

Liquid Rhythm is both a drum arranger and generator, with a healthy supply of loops, and drum samples. As a drum arranger and editor, it does something that is quite astounding. WaveDNA came up with a visual system for MIDI that not only makes it easy to see visual representations of MIDI clips, but it also allows you, once you understand the visual system, to figure out what those loops sound like from afar. So, I actually found myself beginning to 'see' a snare loop, and understand, just by eyeballing the loop, what it would sound like.

What's even more astounding is that Liquid Rhythm will attempt to prescribe lists of MIDI beats that will be set up to play specifically for the type of drum that you're currently focusing on. For example: If you select a snare drum, individually within the arrangement window (or, Arranger), a list will populate within the Beat Builder's Bar Form list. All you have to do is select one of the Barforms, and the snare will just start playing with a custom beat that a snare really would play. 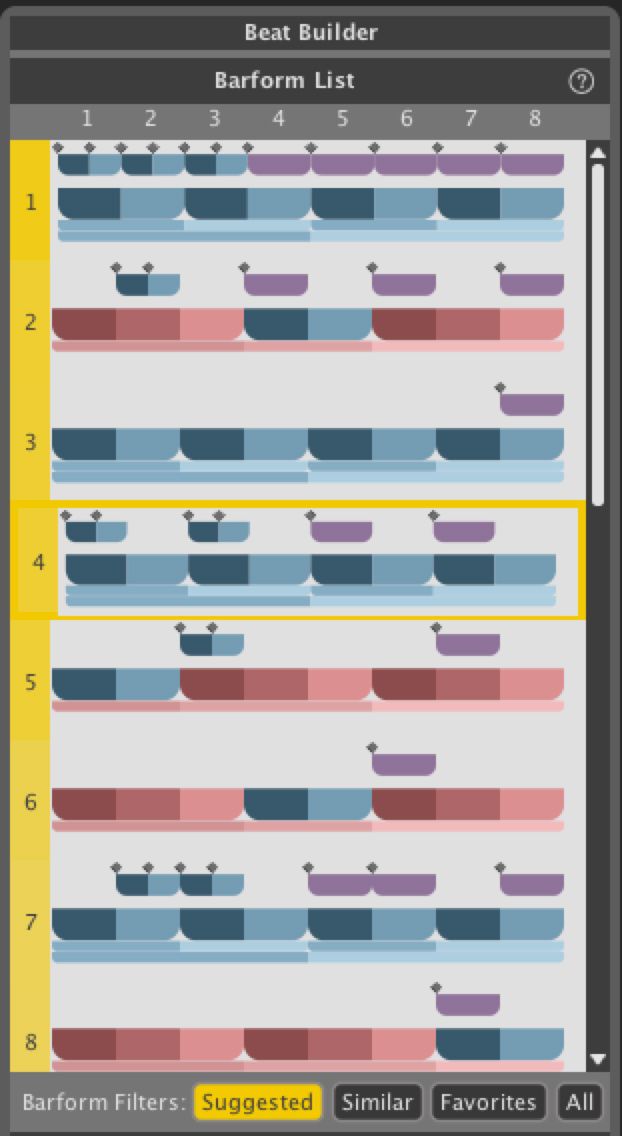 The cleverly implemented language in Liquid Rhythm allows you to "see" what a loop will sound like!

If you would like to be more 'hands on' with that snare drum, and maybe add some hits that make it even more you, you can use the Beatform Sequencer to quickly and easily add in 32nd note fills, or, a 16th note flourish in not even a 10th of the time that it would take you to draw in complex hits in a regular note editor. Seriously, Liquid Rhythm takes drum editing to a whole other level. 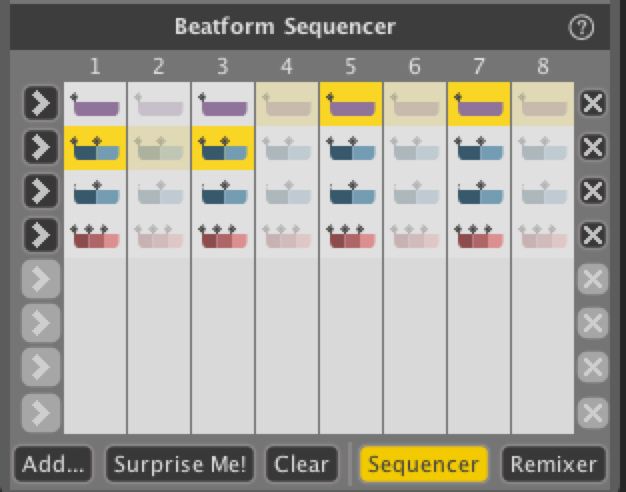 The Beatform Sequencer makes it quicker than ever to create note fills and flourishes.

So, Liquid Rhythm is essentially one of the most advanced drum machines ever made. But, it looks like a DAW. That's the crazy part. It makes beats, and behaves like a DAW. You can run it as a standalone program, similar to a DAW. As a standalone, you can use Liquid Rhythms to make new beats, edit MIDI from other DAWs, and just create loops. This is awesome. But, let's talk about it as a plug-in.

"Liquid Rhythm is essentially one of the most advanced drum machines ever made."

Liquid Rhythm, when it is brought in as a plug-in follows along and syncs just like any MIDI instruments. And, like any MIDI instrument, it also generates MIDI. This is significant because it makes it possible to record the MIDI that comes from Liquid Rhythm. This means that you can record the MIDI performances in real time! In other words, you can build your drum arrangements up quickly and easily for a whole song.

This last bit was where I was initially quite skeptical, at first. Let me tell you, I wasn't even prepared for how well it worked. I recorded a clip within session view that was a recording of MIDI coming from Liquid Rhythm. It worked flawlessly. And, in the end, I was left with a complete drum performance. Not just loops. In just the same way Ableton can record arrangements, Liquid Rhythm can help you record full drum performances for an entire song... In one pass. Maybe two. This pass will include fills, breaks, and all the other stuff that you usually have to go back in and edit in later.

"If you're someone that needs quick, original, drum arrangements, look no further than Liquid Rhythm"

Liquid Rhythm really is a game changer. If you're someone that needs quick, original, drum arrangements, look no further than Liquid Rhythm. It's almost just like working with a real drummer. Seriously, it's like you get to tap him on the shoulder and say, “Alright, now a 16 beat, now a fill there...” And, it sounds good! It's not a crappy drummer, it's a really good drummer with 8 cybernetic arms.

As I mentioned Ableton and Liquid Rhythm are, at the moment, the best pairing. But, it's currently also RTAS, VST and AU compatible. It works wonderfully in all the other DAWs, it's just able to do a little more in Ableton, thanks to Max. However, seeing what the guys at WaveDNA  came up with, and how amazingly intelligent they are for such an invention, I'm sure they'll be having some more amazing stuff coming down the pipe.

Joey1022
wow this looks awesome so does that bundle they have