Language
Mastering articles are amongst our favorite here at AskAudio. So, we were a little skeptical when we first came across LANDR, an algorithm-based online mastering service. Joe Albano checks it out.

LANDR is an online mastering service whose goal is to make mastering a quick and easy process, without any special knowledge required, and without compromising on quality. The idea of uploading a track to be mastered remotely is not all that radical—people collaborate via the cloud all the time, and many top-drawer mastering engineers prefer to work without the client present—but the idea of having a computer algorithm handle the job is a little more surprising. LANDR's mastering is handled not by some guy in a back room, but by a sophisticated algorithm—an automated process—that not only determines the best application of processing for each file, but, reportedly, continually learns how to do it even better, the more tracks it works on (LANDR notes they've recently hit the one-million-served mark). They've just gone live with a new, improved version of their mastering algorithm, making this a good time to take look at the service.

Now, I'm one of those engineers—and there are many of us—who's inherently skeptical about the whole idea of mastering (or any of the studio arts) as an automated process. The idea of applying an algorithm to what really is an art seems more like wishful thinking than practical approach—I've heard enough damage done by mastering “presets” than I'd care to remember. So it was with a healthy dose of cynicism that I approached this review of LANDR's mastering services. Well, to cut to the chase for a moment, I was pleasantly surprised by the results on the two songs I tested it with. But before I get into the nitty-gritty, a little description of the site and the process is in order.

Mastering with LANDR is simplicity itself. They offer several tiers of service—Free, Basic, Advanced, and Pro (see Fig 1)—with the paid services seemingly reasonably priced (if you need an album's worth of full quality WAVs, the Pro option would be the best bet). 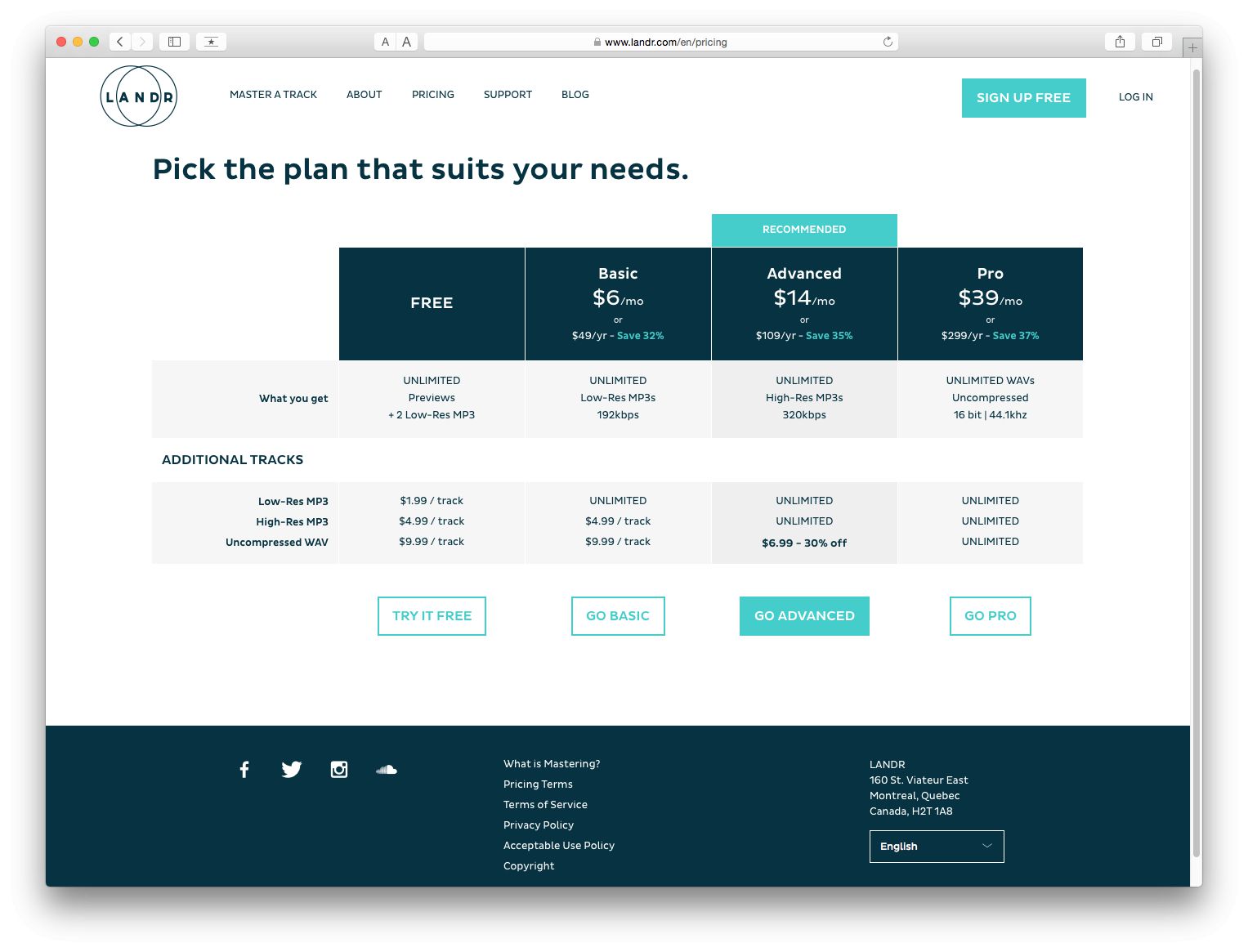 The service is geared to anyone from casual users (who may just want slightly more polished-sounding tracks to share with band members or on social media), to musicians or self-mixers (who want to get an idea of what mastering is likely to do to their mixes, before committing), to users with more demanding applications (finalizing and distribution). Once you've set up an account, you simply upload your finished mix, which can be as easy as dragging it into the LANDR window in a browser. When it's ready, you're presented with a minimal set of options. You can audition a snippet of the mastered file, comparing it with the original, and you can choose to process at one of three levels of “Intensity” (which can also be auditioned and compared briefly). LANDR suggests that these are geared for different genres—Low-Intensity is primarily for Jazz & Folk mixes, Medium for Pop & Rock, and High for Techno & HipHop. To my ears, they represent different degrees of processing and level boost—Low adds just a little bit of presence and density, with only a dB or so level increase; Medium noticeably compresses the files, but with an appropriate amount of processing, and has a more significant level increase, though a few dB shy of typical maximum commercial levels; High achieved those maximum loudness levels, but with heavier processing—more on that in a minute. After comparing Intensities, you make your choice, hit “Save”, and that's it—in a few minutes you'll receive an email link to download the finished master. All of this worked flawlessly for me, so I set out to put LANDR's algorithm(s) to the test.

I had LANDR master two songs. Song One was a rock mix of a local band (that I'd mastered in the box)—professionally mixed, with a healthy amount of compression on the individual tracks, but none (no processing at all) on the master bus. Song Two was recorded and mixed by a local songwriter, who is not an engineer, and so the mix had minimal track processing, other than basic EQ and level. Song One came in at a pretty hot level (just under 0 dBFS); Song Two, with less track compression and wider dynamic swings, was maybe a few dB lower overall, especially in the quieter sections, compared with a typical modern mix.

I also had a mastered version of Song One (mastered with plug-ins, in the box), for comparison.

I wanted to see how LANDR would handle each, so I mastered both songs at all three Intensity levels, and then sat down to compare them with each other, the original tracks, and the previously mastered version (of Song One).

Just as I was getting ready to begin writing this article, LANDR revealed that they were about to debut a new processing algorithm—which has now gone live, as of July 7th—and they offered to re-master the songs with this new, improved version. I've included snippets of both songs at all three levels with the new algorithm, and a couple with the old, for comparison (see below).

The Ears Have It

Despite the different mixes, the results were fairly consistent with both songs. With the Low and Medium Intensity settings, the processing was appropriate, and sounded good. With both songs, they added a bit of very subtle presence (a bit more with the less-processed Song Two—a LANDR target curve, perhaps?), and Medium increased compression/density to a degree consistent with modern masters. The lower overall level of the Low setting is probably why they suggest it for more “purist” genres, like jazz. Medium's output level came in a few dB shy of typical “hot” commercial masters, but that's how you maintain the integrity of transients—there's a limit to how much brickwall limiting can be applied (which is where you get those really hot levels) before drums (and then everything else) start to sound squashed. LANDR's Medium level appears to stop pushing level at the point where transients would start to be noticeably affected. I was pleased to see this—it seems to indicate a commitment to maintaining quality over sheer loudness (Audio Examples 6 & 7).

But with the original algorithm (the one that had been in use up 'til now), High Intensity was problematic. If you check out Audio Examples 8 & 9, you can hear that, while it did achieve loudness levels that stand up to commercial releases, that came with a price—it really squashed the drums & overall mixes, to my ears, to an unacceptable degree. Now, to be fair, that level of squash may be more appropriate, for example, for some EDM styles, but it didn't work with the rock/acoustic music I was testing with. Despite LANDR's genre-based recommendations, I couldn't shake the image of all those artists (from every genre) immediately going for maximum level, even at the expense of quality, and was all set to launch into a cautionary tale about an automated service allowing the user too much leeway to make a bad choice, when the second set of masters, done with the new algorithm, arrived.

It seems that someone at LANDR had the same concern I did, and set out to address it. This time High Intensity delivered significantly better results—with Song One, it still came in at almost the same hot level (maybe a dB less than before), but now the mix was crisp, and drums had the snap that had been sacrificed in the older version (Audio Example 10). Interestingly, with the less-processed mix (Song Two), Medium also delivered a hot level, and High an even hotter one, but still without imparting an overly-processed sound (Audio Examples 7 & 11). Despite my innate skepticism, I had to admit that this mastering job succeeded in combining the more transparent processing of the Medium setting with the extra level that you just know people are going to go for. If you'd visited the site previously, and felt that your masters sounded overcompressed, it'd be well worth another visit to check out how the new algorithm handles them. 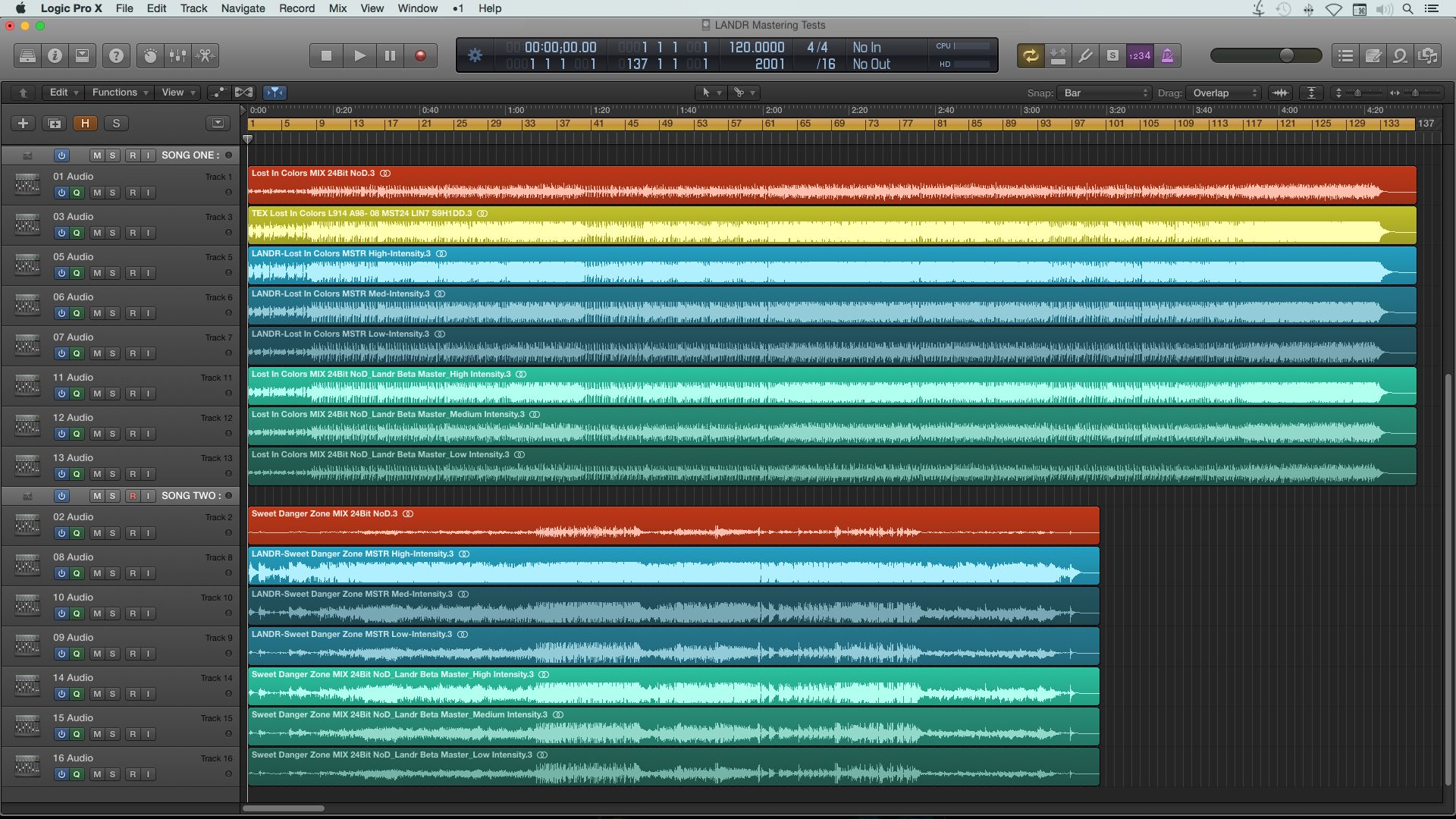 So, does this mean I think LANDR is ready to send all the mastering houses into Chapter 11, and put all those top-drawer mastering engineers out to pasture? Well, no, of course not... There's still no substitute for a pro applying his years of experience and golden ears to a project, especially when the mix has more significant problems that need to be addressed. And, while LANDR did a commendable job preserving the particular sound of the mixes I sent it, it wouldn't be able to provide feedback on issues that might need to be dealt with back at the mix stage, or make the important decisions as to what the most appropriate level/degree of processing would be for a particular song (especially one that falls between genres). And, as far as I understand it, it won't go the extra mile when mastering a collection—an album—to insure that very disparate-sounding mixes end up meshing together properly when heard in sequence.

But, those caveats aside, I must say that this latest incarnation of LANDR surprised me with its quality, and what seems like a commitment to “first do no harm”. It appears that, with this latest algorithm, LANDR set out to try to insure that, even when pumping up the volume to the crazy commercial levels that many (most) people insist on, the system will still maintain a certain degree of clarity and transient integrity, even if that means sacrificing a dB or two of level at the High setting (and I know from experience that it's those last couple of dB where much of the damage is done!). Now, can a good mix engineer, with the usual DAW mastering tools, achieve comparable or better results (including the human decision-making aspects I mentioned), once he's up to speed? Again, of course! But for those who, perhaps wisely, know they're not ready to take on a mastering job, LANDR might be just the ticket. And, for those who are just learning mastering, it could be a good source of comparison with their own fledgling results—providing mastered references of their own material, as their ears become accustomed to the subtleties and limitations of the process.

I'd be curious to hear the results, with the latest algorithm, on more songs (after all, two songs is not the basis for a really comprehensive test, and your mileage may vary). That said, it looks like online mastering services may be here to stay, and LANDR, so far, seems to be a promising option.

Learn how to master your tracks yourself in your DAW at AskVideo.com

Jesse D Greathouse
Unfortunately for me the algorithm seemed very confused by my track. It even changed the tempo of the track which was disheartening to me because I will probably need to pay someone a lot more to master it.

Here is my original:

I suppose it's probably because of the inconsistency in intensity and style of the track. Landr's algorithm probably wasn't able to adjust to the changes in the track.

Jaydude
Does it offer options for the destination of the master e.g iTunes, Sporify, CD, vinyl?