Language
Korg is back at it again with another volca that is already blowing my mind. In this review, show you my new friend, volca kick, and see what's thumpin' with this new offering from our pals at Korg.

Through modern electronic music and Hip-Hop, the kick drum and the bass synth have been slowly merging. Recognizing this, and many other trends in pop music, Korg has developed an intuitive instrument, with a lot of very expressive functions and workflows that, over time, could usher forward some serious advancements in what we’re hearing from many forms of electronic music... Well, once volca kick and its other brothers have had some years to filter through the music scene. It may be a small black, beautiful box, but it’s also art, my friend. 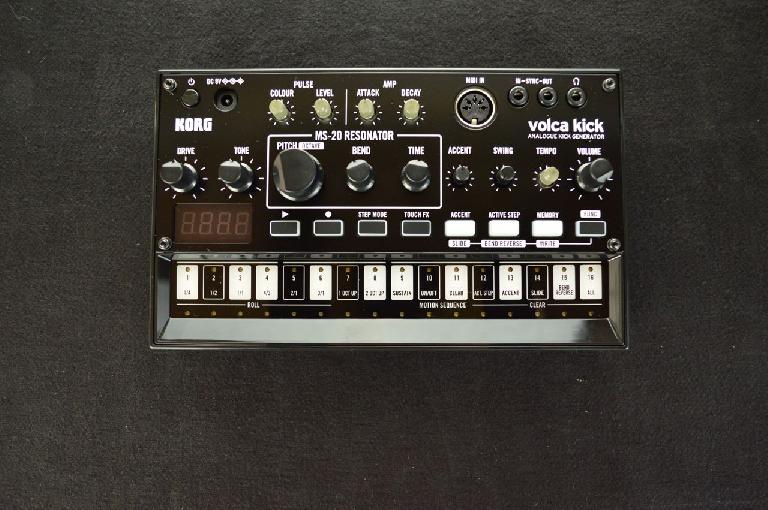 The volca kick is an intuitive instrument with lots of features.

Like all the other volca devices, Korg still has not included a power cable. I had to supply my own. Again, the chassis, and knobs are plastic and definitely tell you very silently, “be careful”. But, once the lights are on, and you press that play button, it all falls by the wayside.

What made me really happy was to discover that there is more than just being a kick drum to the volca kick. In fact, you can play it as a melodic synth, as I’m sure you picked up, seeing the inverted, mono chromatic keyboard within the pictures, herein. As a synth, there is actually a serious reason to use volca kick as a bass synth, especially when you begin playing with accents, which are per step, and even affect steps which sit between populated steps, extended release times, and slide notes. Especially when you consider the history of the technology supplying the sound coming out of volca kick.

Watch our video demo of the Korg volca kick: 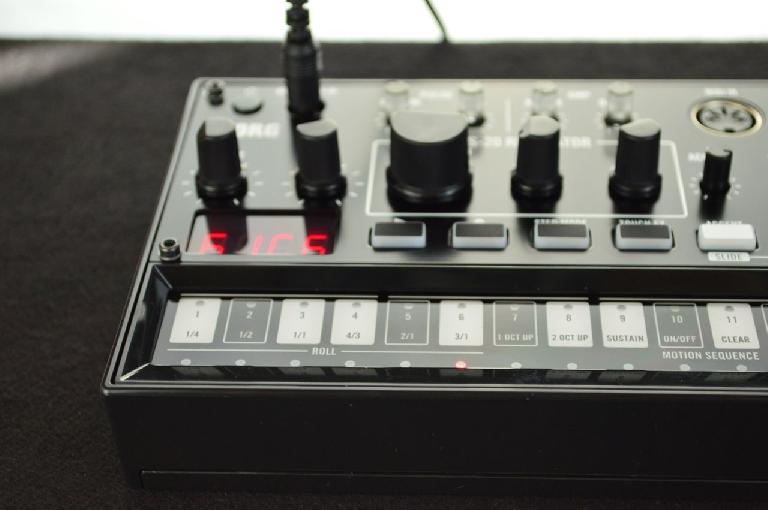 An overdriven MS-20 filter’s self oscillation supplies the source tone triggered either by step buttons, or MIDI. And when the Drive knob is increased, a very serious animal starts to come out of volca kick that would shake any dance floor. Beyond being such an impressive beat machine for a box that only delivers, really, one drum, it’s great for guys who are constantly sampling, and stacking kick drums. Because of the fluid, analog, constant meta-morphing taking place, one could sample for a few minutes and come back with several new kick drums, out of minor variations taking place, by simple tweaks, over time. It’s the latter scenario that really rings true, here. I’ve always wanted the ultimate kick drum generator (outside of trying to sell an arm and a leg to just purchase a real 808). With volca kick, Korg has given us something that really may be a great new alternative to such old devices that have become obscenely cost prohibitive, and ever hard to maintenance. 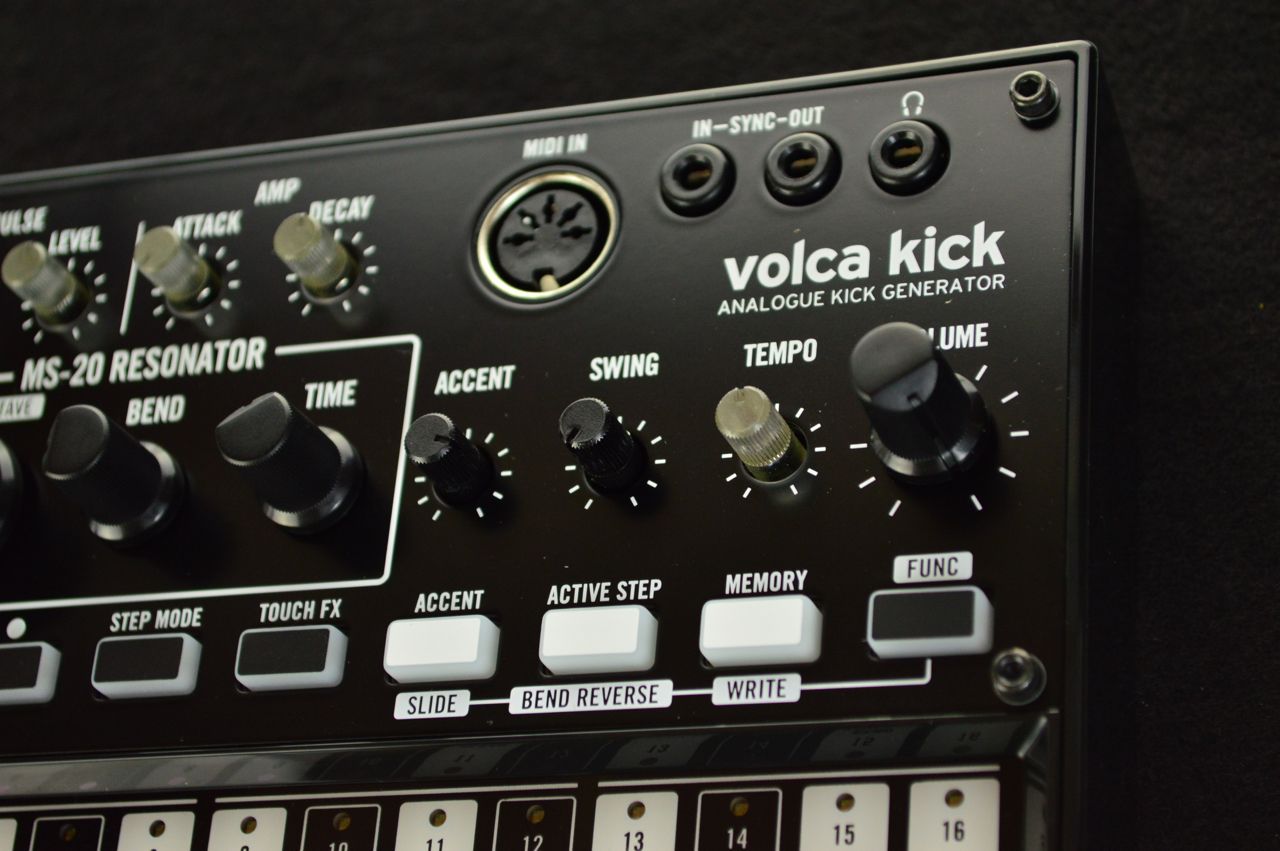 If you haven’t noticed the Touch FX button on the volca kick, you should. It’s kind of like having Stutter Edit, from iZotope within a small, portable kick box. And, so much fun! Especially, when volca kick is being used as a kick bass. When in Touch FX Mode, you gain quick access to several different clever quick edits like multiple roll resolutions (also accessed through the Func button with step buttons 1–6), octaves, and even Sustain, which maximizes the Amplitude Envelope Decay, making transitional effects of all sort very easy to accomplish. There is even randomization of the Pitch, Bend and Time knob in the Resonator section, when you press Motion Recording, in Touch FX mode. I’ll admit that I played with this a lot. Sure, the other volcas have Step Jump, which is a lot of fun. With volca kick, however, with one touch of a button, in Touch FX mode, I can reverse all of my kicks (Touch FX+Clear Bend Reverse), mute the main output (Touch FX+Clear All), and come out of the effects, just by letting up my fingers. 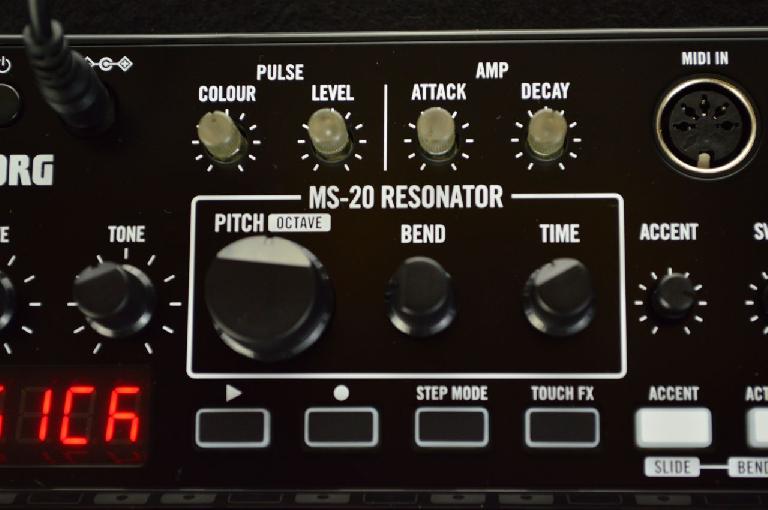 The MS-20 Resonator is one of the coolest features.

In addition to Touch FX, the Reverse mode is really fun, allowing you to quickly dedicate certain steps to an inverted bend, or pitch bend, so that the kick sounds reversed. When you begin using Reverse steps with Slide mode, which mark certain steps as steps which seem to connect other steps, creating an illusion of connecting beats, or even notes. However you play it. The bottom line is: this is one very expressive kick drum sequencer.

Of course, no analog kick drum would be complete without the small tick to simulate the high end, beater tap of a kick drum. Very similar to what you see on volca beats, with  the Click knob, on the Kick channel, volca kick has Pulse. What I really like about Pulse is that they give you not only a knob to raise the level of the tick, or ‘Pulse’ of your kick, but they also give you a knob to modify the color of the Pulse as well, giving you a drum synth truly capable of generating several variations of kick drums in both color and character on the high frequencies. And, serious manipulation of the low frequencies, with the Pitch, Bend and Time knobs, back in the MS-20 Resonator section. The Pulse Colour and Level both are also Motion Recording capable, as well. So, lots of sub-patterns are possible, again- with just one drum. I think you’re showboating, Korg! 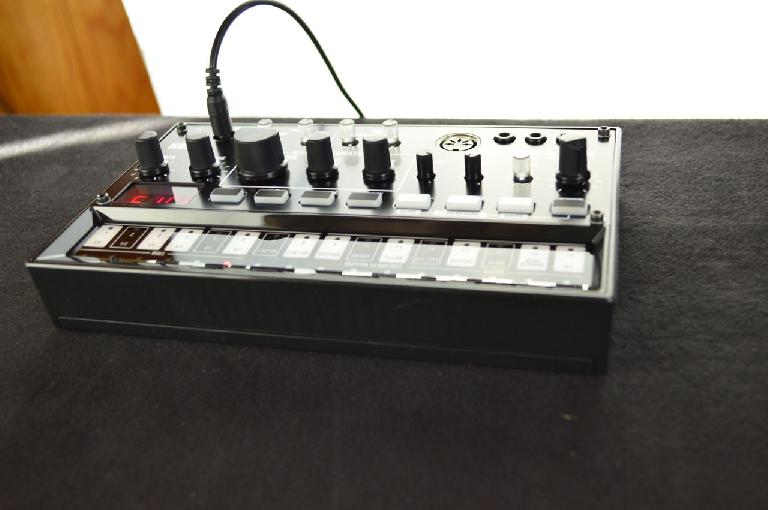 Like all of the volcas, there are always tricks with the FUNC button. This volca is no exception. And, it also exhibits Korg utilizing those impressive Clear functions even more. With volca kick you can clear, and unclear Accents, Active Steps, Slide, Bend Reverse, and All. Remember: All of these are undo/toggles, as well. So I can introduce accents, clear accents, bring the same accents back, while toggling Bend Reverse, Active Steps, and tweaking knobs. This is probably my number one musical instrument choice for the non-committal.

Oh, and just in case you are wondering... Pattern Chain is still in, going forward, it appears, for the volca line. 16 memory locations with Pattern Chain!

The Korg volca kick is a huge step forward for the volca line. It demonstrates a very, very savvy development team, creating powerful workflow advances for electronic expression. These simple workflow advances, built of small functions like Touch FX, and Bend Reverse, when comprehended could take really any individual off the street, with little, to no comprehension of music, and give them a career... With practice, dedication, playing shows and paying dues. Granted, it’s never that easy. But Korg is really making the tools available.

Pros: Possibly the most expressive electronic kick drum ever, while also being an amazing Bass Synth.

Dave
Great article G.W. I'm awaiting my Kick that I pre-ordered can't wait to check it out.
Alex
You should check out the Jomox Xbase 09's kick drum section if you're into this kinda thing. With its two lfo's it creates monstruous basslines and earth shaking kicks.