Language
Probably the most talked about analog synths in 2013 are from Korg. G. W. Childs wasted no time getting hands on with the Volca Keys, which at under $150 is a steal, but how does it sound and perform?

Okay, so before I begin to tell you about the Korg Volca Keys (Street price $149.99), I want to make one thing very clear. I purchased this device. So, what you're reading in this review is coming from an actual owner. It showed up today in its shiny, little package. And, several hours later, how do I feel about my new prize? Read on, and find out.

"The Volca keys is, in fact, a very good lead synth with up to 3 part polyphony, unison mode, ring modulator mode, and more."

What is Volca Keys?

Within the Volca line, there are, as you probably already know, three different devices. Keys, Bass and Drums. I plan on picking up all of these devices, but the Keys was my first pick. The reason that I chose Keys first was simple, it appeared to have the most versatility. After all, there's a filter, an envelope gate, detuning, and more. And, on the demo videos I watched, it just had my sound. What I didn't expect were all the other things it could do, which seem to be understated on the video. 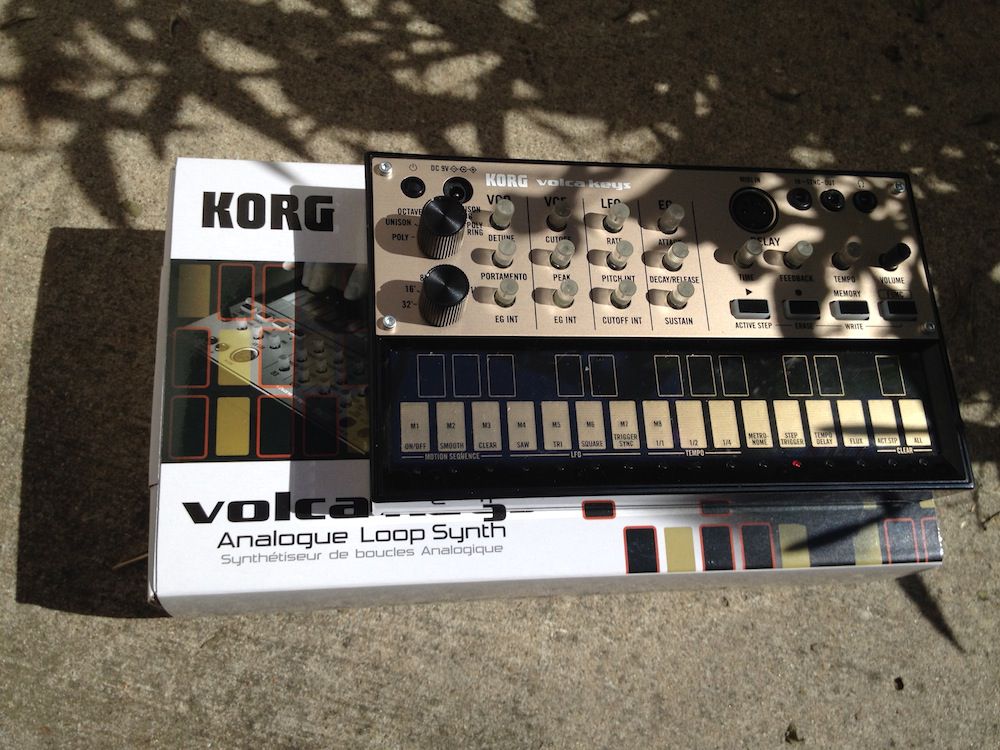 Before we get into that, let me stick to the heading above and tell you what it does. The Volca keys is, in fact, a very good lead synth with up to 3 part polyphony, unison mode, ring modulator mode, and more. Did I mention that it's real analog, too? The Volca keys does have a MIDI input, so you can actually use it with a DAW. And, it also has control voltage inputs and outputs. So, if you're using other devices with CV inputs, or you've got Reason, you will be very happy.

There's also a built-in delay, and a step sequencer. We'll talk about these a little more, later. For the meantime, let's talk about the sound.

How does it Sound?

The Volca Keys sounds extremely nice. It's thick, and it's expressive. When you start adding some detuning to it, it gets very big and will work wonderfully for Trance, EDM, EBM, and more. Because it does have an LFO, it's also possible to get some really nice wobbles out of it, as well.

The Delay was the only things, in terms of sound, that I felt could've been a little better. The echoes produced aren't exactly a 1 to 1 replication. There's some filtering going on, and you never can bring it up in the mix quite enough, while in Unison mode. Though, you can get some nice feedback from it. And, while it's in Poly mode, it's really quite nice. It's just a minor thing. When you get into Unison Ring and Poly Ring... Well, this is where the sound can get quite interesting. In these modes, the sound is much more aggressive. If you apply a distortion plug-in, or two from your DAW, you'll be in heaven. Well, if you like noisy, aggressive synths.

Sadly, there's only technically one waveform for the built-in oscillator, which is a saw tooth. But, when you start getting into the ring modes, the sound can get much more interesting. The LFO, however, does have Saw, Triangle, Square waveforms.

"The Volca Keys looks and feels amazing. I had no idea that there were so many LEDs. When you first turn it on, it's like the fourth of July."

How does it Feel?

The Volca Keys looks and feels amazing. I had no idea that there were so many LEDs. When you first turn it on, it's like the fourth of July. When it's in action, the knobs light up as you turn them, with some exception. For some reason, the Peak knob does not, even though the Cutoff on the VCF does. It's a design thing, who knows? 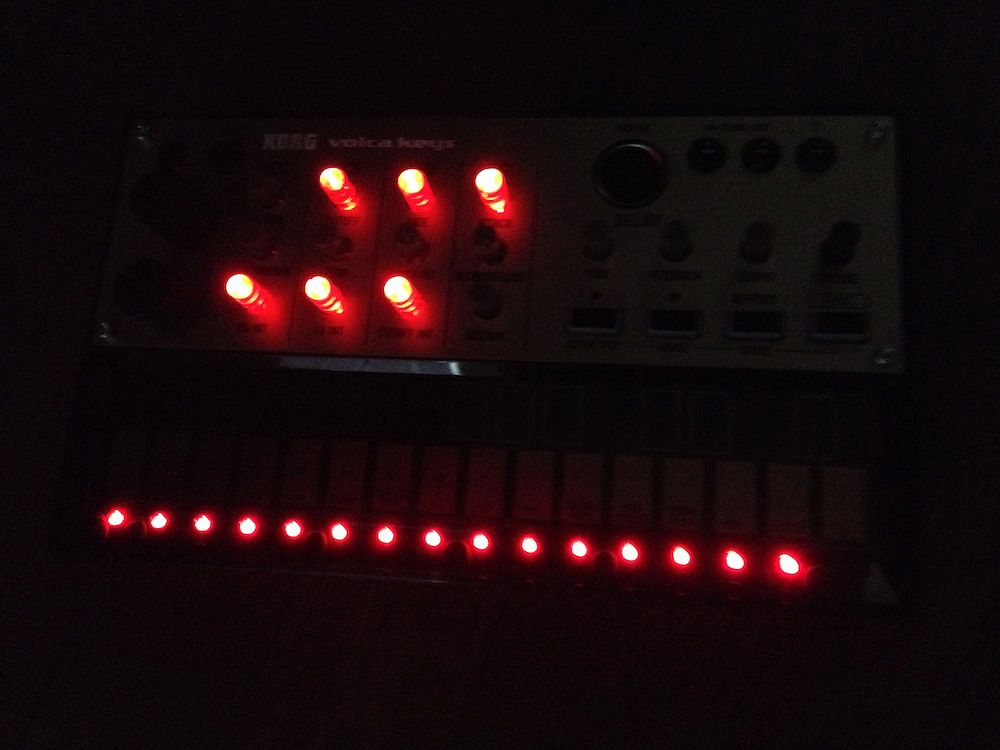 The built-in keys actually work a lot better than you might imagine. They are sensitive in the exact way that they should be. Not too much, not too less. They are just right. I found it very easy to program some very nice sequences within the built-in step sequencer, which we'll talk more about in a minute.

Beyond the keys, for a $150 synth, it feels quite rugged. The knobs are nicely recessed, so there appears to be no real danger of losing them. But, the over all package is plastic. I plan to carry these in a foam padded suitcase, anyway. So, I'm not too worried about it. Funny enough, there is actually a built-in speaker, adding to the whole retro vibe of this device. This may not be appreciated by the pro. But, because of the price of this device, you could easily give this to as a gift to a younger enthusiast. I wish I'd gotten one of these for Christmas!!

"Each pattern can have its own automation, and settings. This makes the Volca Keys a wonderful device, possibly, for live performance."

How Does It Play?

All of the marketing copy online, regarding the Volca Keys really should add a little more info about the built-in sequencer. No, it's not nearly as robust as a computer. But, it does store up to 8 patterns within its built-in memory. And, each pattern can have its own automation, and settings. This makes the Volca Keys a wonderful device, possibly, for live performance. It's even easy to program on the fly, which I found out quickly when setting it down with Ableton for the first time. I set up a kick drum on repeat, synced (yes, you can sync to MIDI, too) and started programming along. To be honest, it's the most fun I've had with an external device for some time, seriously. Great fun! I really felt like I was ready to get up on stage! 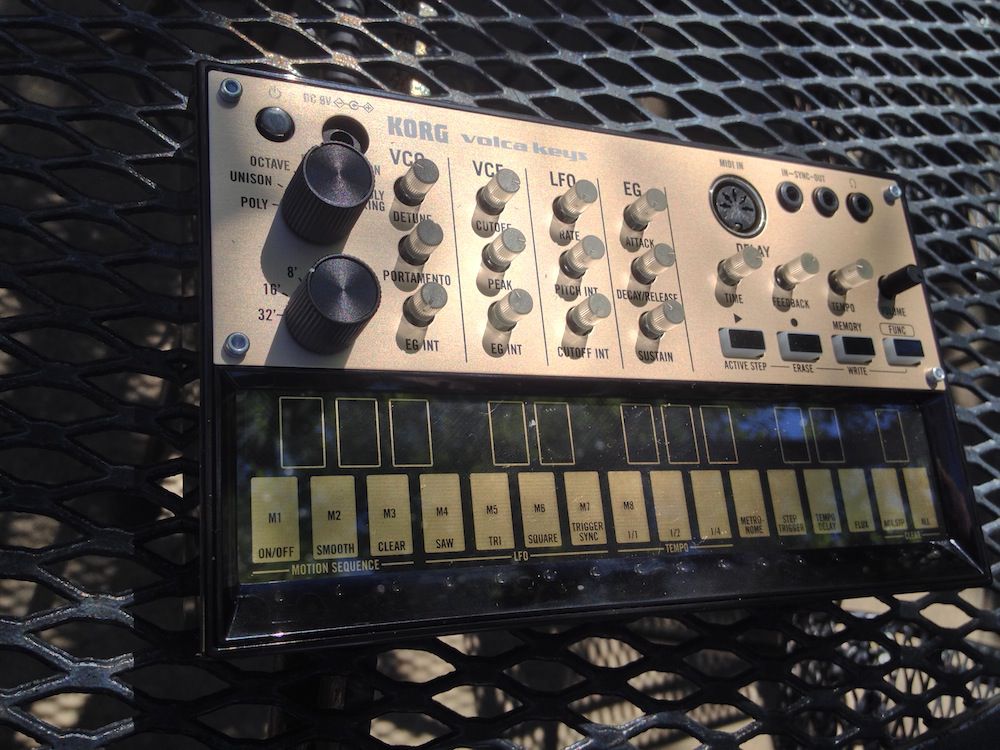 I am thoroughly ecstatic about my purchase of the Korg Volca Keys. In my opinion, and based on how these devices are always out of stock, or on pre-order, these devices are investments. If you look on Amazon right now, you'll notice that people are already starting to ask prices that are a little bit above street. This could mean that a year from now, you'll be purchasing a Volca for more than Korg's intended selling price. But, even if this doesn't happen, you'll have an inexpensive synth with a step sequencer that will only help your sound. Soon, I'll be picking up the Volca Drums. Hopefully, I can tell you more about how the two work together, soon!

Mortar
> Iâ€™ll be picking up the Volca Drums.
I know he meant Beats, but rather prophetic, don't you think?