Language
Are you looking for a polyphonic portable hardware FM synthesizer with a sequencer and arpeggiator that can load old DX-7 patches for under $225? We get hands on with the Korg volca FM in this review.

It’s wonderful to see Korg’s volca series continue to flourish... And, evolve. And, with the release of the new volca FM, in my opinion, I think we can rest assured that the current trajectory of volca evolution is going to continue well on into the future, while bringing back part of the past. In this review, I’d like to introduce you to volca FM, and why I think it’s amazing!

Another Year, Another Technology 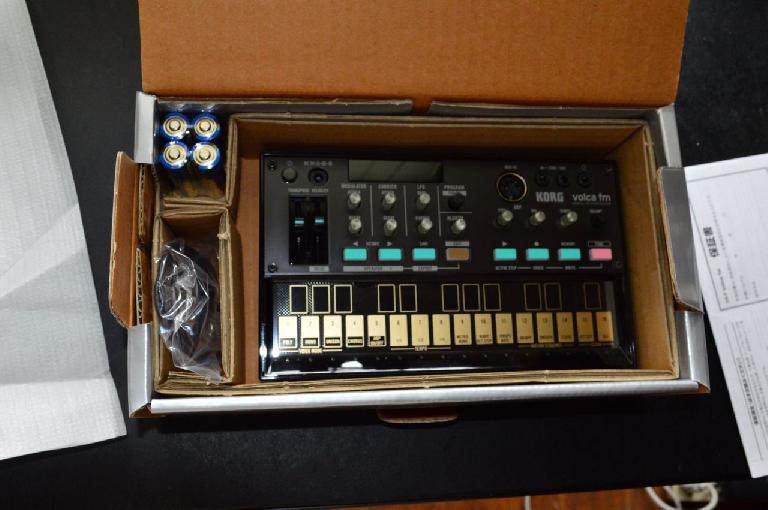 One of the things that the volca line has done extremely well is introducing ‘bite-sized’ versions of different technologies in synthesis that have appeared over the years. We’ve seen an analog drum machine, a couple of subtractive synthesizers, and even a sample playback device. So, it makes sense that we’d finally see FM synthesis, in its full entirety, appear within the volca universe. What I didn’t expect, however, was the additional polish, and so many nods to a classic synth that Korg had nothing to do with.

Crazy enough, you can load up presets from the highly acclaimed DX-7 from Yamaha. But it doesn’t really end there! The color scheme matches the DX-7, the synth engine appears to be entirely the DX-7. Only the packaging and the keyboard... It’s almost like having a mini, mini, mini DX-100. 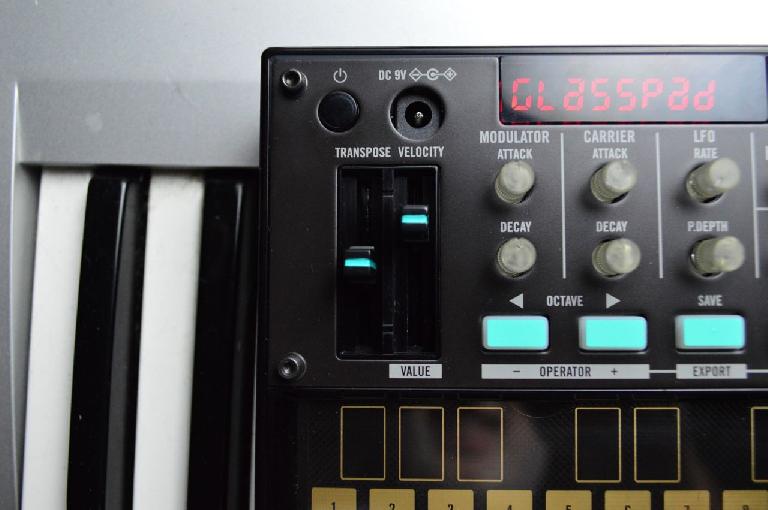 The expressive Transpose and Velocity sliders on the volca FM.

But, where the original DX-7 was pretty much just keyboard, pitch bender and mod wheel, the volca FM still holds on to all of the extra parameters, tweaks and the sequencer (with a few new features). And add to this a new arpeggiator, those very handy and expressive Transpose and Velocity sliders, which seem like a gimmick, till you actually use them. It is amazingly handy to be able to tweak the velocity and transposition in real time. These tweaks actually affect the pattern, as it plays back in the sequencer. So, you can program a static bassline, and just sit back and jog the velocity and transposition. It makes you really want a MIDI Out. 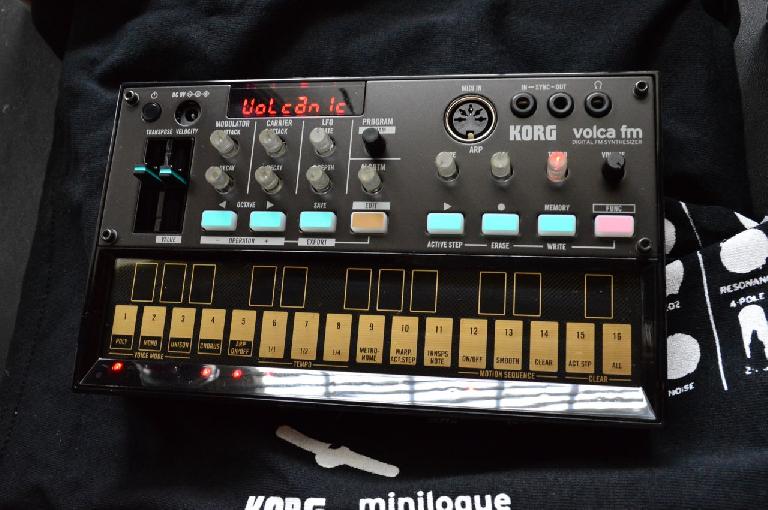 volca FM - makes you wish it had MIDI Out too.

You heard right! The volca FM is polyphonic! In Poly Mode, you can play up to three keys at once. And, you also have the option for Unison and Monophonic. There’s also an optional Chorus that can be enabled with FUNC+Step Button 4. My favorite addition is the the Arpeggiator. Simply hold a key (or, two), while recording, and then go back and tweak till the night (or, show) is over. The fully editable Arp, which includes multiple resolutions and directions, and especially when MIDI’d to a bigger keyboard, adds a level of polish and ease of use that the other volca units just don’t have... At least, not like this...

Personally, I have never exactly taken off with FM Synthesis. Initially, this was the volca I was the least excited about. However, after having used Korg’s more modern way of interacting with the guts of a synthesizer that is much more complicated than any other volca, as well as a synth that was really just complicated to program... well, without creating a run-on sentence, I can say that have made me a true FM convert. 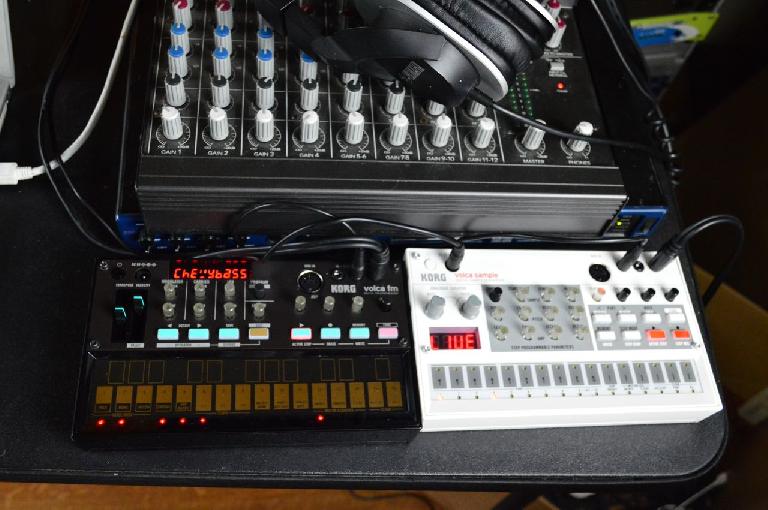 What’s so nice is actually being able to see the names of the patches, save patches, and even go into EDIT mode so that you can edit patches... From volca FM. All the parameters of the DX-7 are there. So, you will find yourself doing some toggling. But, honestly, I spent a lot of time simply modifying the Algorithm knob for different patches, just to see what would happen. And, to be honest, this is where the fun really began to form for me. I could let go of the need to wrap my head around FM synthesis, and finally have some fun with it, and have something very cool to show for all of my effort.

I really love the way that Korg is continually upping the ante with the sequencer, as the volca line develops. We initially saw the Pattern Chaining function with volca sample. Though, with volca FM, chaining doesn’t work quite the same, per se, as volca sample. Where volca sample has only some of its patterns set up specifically for song chaining, with volca sample, you can chain any of the patterns, simply by holding the Memory button, and selecting the range of which patterns will play back in a chain. As you’re probably aware, if you have more than a couple of volca devices, those 16 step patterns can become quite a limitation, over time. So, it’s nice to see Korg continually raising the bar, technology, and the ability for an artist to write more complicated pieces for live performance, recording, and free form.

Like volca keys, you also have the ability to switch to half-time, and a quarter-time resolutions. This is so welcome with the volca FM, as it’s a synth and a volca that is definitely as expressive as volca keys, and those slower resolutions make great transitions, and breaks. 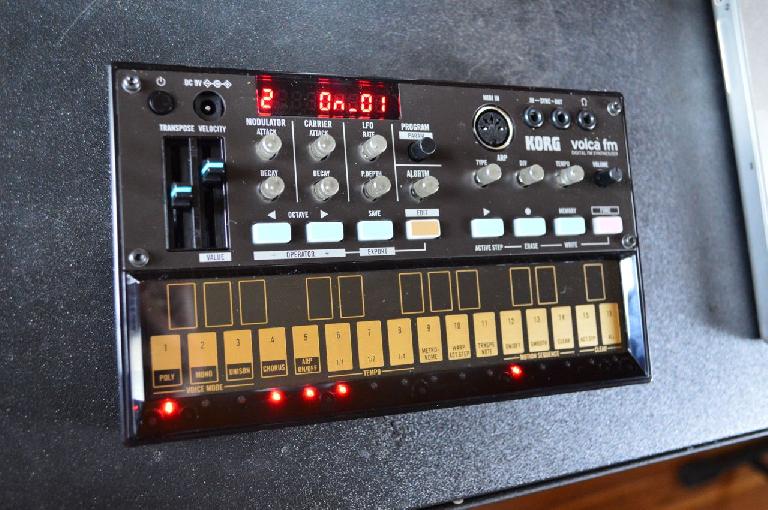 Speaking of breaks, there is a new feature called Warp Active Step. In this mode, when fewer than 16 steps are selected, the pattern timing is compensated so that the pattern will still occupy the same playback time as a pattern at a 16 step resolutions. If that explanation is as difficult to pick up as it was to write, suffice to say, this is a great mode that can be used for transitioning, breaks, and new patterns with very interesting timings.

But, if things sound a little too far out there, after enabling all these cool new features, there’s another function brought over from volca keys—The metronome.

I am so happy with volca FM. From a distance, it might sound like the rigid, antiquated DX-7. But, when you get your hands on it, you’ll discover it’s one of the most easy going, and best sounding volcas, of the pack. And with the ability to now explore sound, while jogging through the presets, coupled with fan favorite functions like song chaining, and new a really powerful arp, I think it’s safe to say that FM is going to be showing up on a lot of stages, in various DJ booths, and more home studios around the world.

Pros: A great sounding, 6 operator FM, table-top synth, with one of the best volca sequencers I have worked with so far. Makes FM synthesis much more fun. You can load vintage DX-7 patches!

Cons: A MIDI out would have been great for this device! No software editor for patch creation. Hopefully, we’ll see some amazing third-party apps for this!