Korg's Stageman 80 - is it a bird, is it a plane? Is it a self-contained portable mini PA with an onboard drum machine? We took it on the road to find out.

There are a lot of musicians, especially electronic based artists, who would love to play music for family and friends, by the beach, on a street corner, or even at a tail gate party. Wouldn’t it be great if someone made a light, portable, battery powered speaker system with effects and rhythm? That’s just what Korg did with the Stageman 80, a portable PA with a built-in drum machine and speakers. Which sounds great on paper! But how does it work in all actuality?

Lots and lots of the classic instruments out there started off a quirky ideas that didn’t quite match the mold at the time. Take the TB-303, for example. Now, the Stageman 80 is not a 303. And it’s not an 808. But it is, in my opinion, capable of starting a revolution in music, in regards to summer time. Hear me out…

Essentially the Stageman 80 is a boom box with a built in PA, and a drum machine. What seems to kill it right out of the gate, at least for the electronic musician, is that there is no way to sync the internal drum machine, or to be able to trigger the drum machine via MIDI. This is a missed opportunity in my opinion. It seems like Korg wanted to gear this more for the singer/guitarist combo as there is only a mic input (vox) and two mono channels (guitar and bass, or keyboard), as well as an auxiliary in and a headphone out. 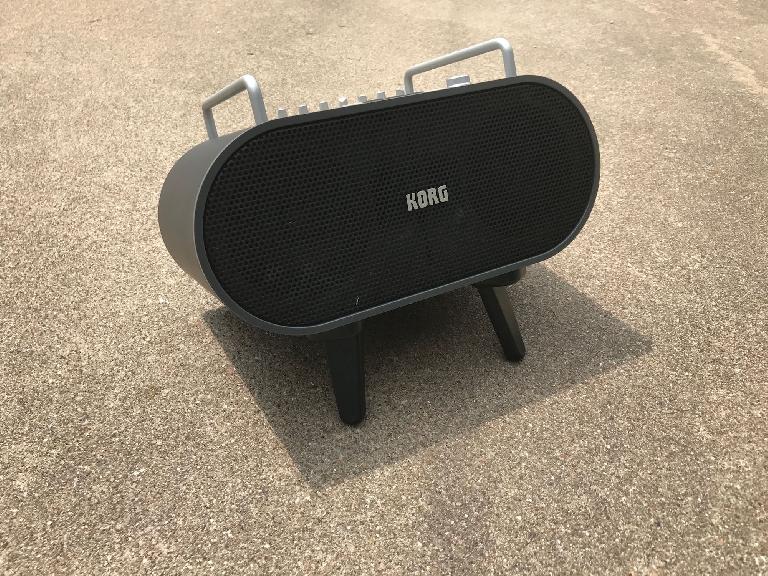 Now, most electronic musicians will want to bail after the description that I gave above. But, hold on now, there is still a lot of joy here. As, with all of that aside, MIDI included… I still love the Stageman 80.

Now, For Some Serious Good News…

First and most obviously, the Stageman 80 is literally built like a tank. Two sturdy handles are mounted firmly on top, ensuring that one or two people will be able to easily carry what, from a distance, looks like a big boom box. But that’s only from the front view. Because when you stare at the top of the Stageman 80, there are several more buttons and knobs that give you control over the drum machine (many preset beats, kits and patterns based on genre), internal sound recorder and mixer functions. The buttons are sturdily inset in to the chassis, and you would have to seriously maneuver the unit into a weird position to knock off one of the knobs. There’s even a dedicated Reverb knob that affects all channels, and was the bomb when it came to quickly changing the atmosphere out and making transitions with a nice, oily turn with knobs that feel very nice. 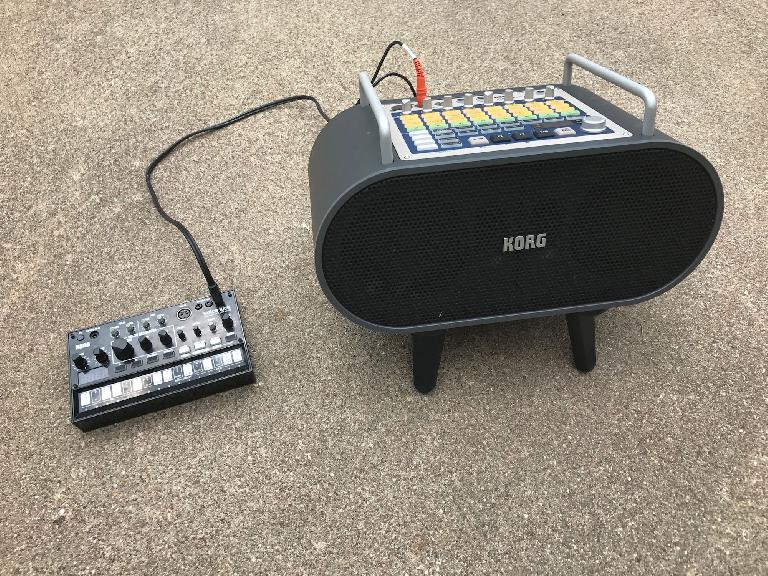 Hidden underneath the Stageman 80 are two handy fold out legs to angle the speakers up. There’s also a mounting hole for a tripod, so that you can put the Stageman at ear level for your crowd, or use it for a personal monitor within a band. 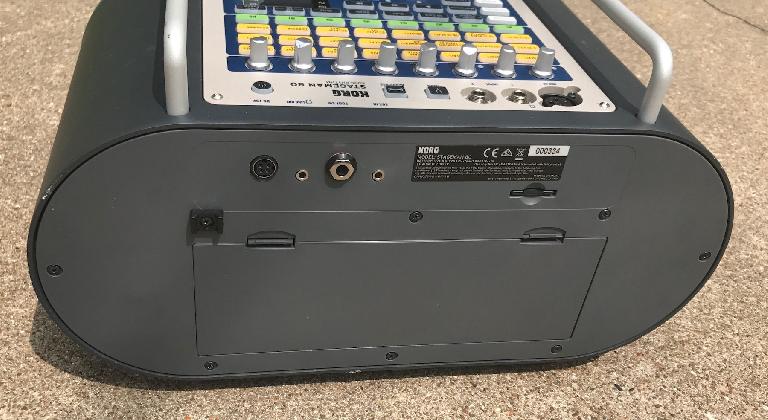 Regardless of where you use the Stageman, there is a battery compartment that holds 6 D batteries (power adapter included). It has a built-in battery meter, letting you know how much power you have left before the show is over. These last two features were the major selling points for me, as there are a lot of great places to play where I live. But, there’s no power in these locations and I’d really rather not bring a generator. 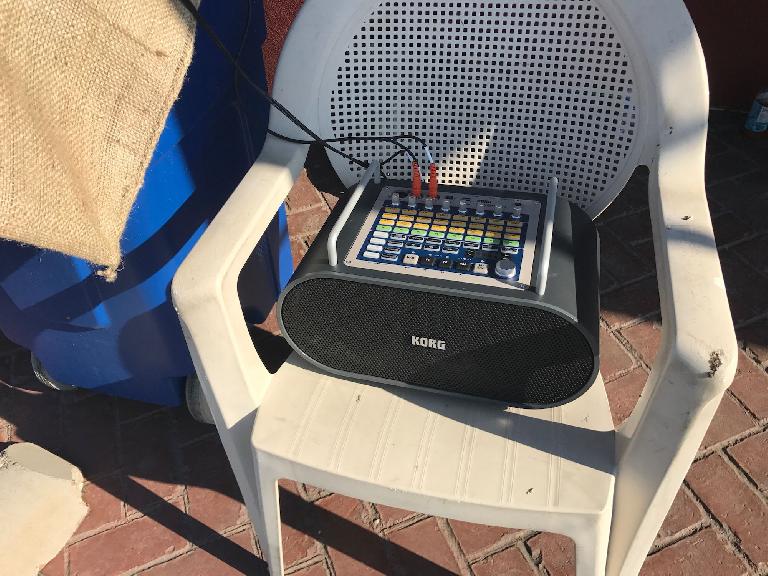 My volca devices, also from Korg, do not have speakers big enough and with enough bass to really be of any significance in a public place for jams. I just sound like a video game/mosquito humming somewhere under conversations at parties and parks. But when the volcas (a few of which are monophonic anyway) are hooked up, or a pocket operator or two - magic happens! People in big open areas can suddenly hear me. I think this is where Korg needs to start listening, too.

As the Stageman 80 is kind of like an amp, and kind of like a PA, it’s possible to overdrive the input with some devices and get some alright crunch coming out of the dual four-inch, built-in speakers. This is particularly cool with devices that are built on overdrive, like Korg’s own volca kick. Sync up a volca beats or a pocket operator and the party has begun! If they threw in some of the bling-bling LEDs that the Electribe 2’s are rocking, the party would be even wilder. But, I get it! Folk singers, spanish guitar players and flautists are usually after a more subdued look when performing out. With that being said, it blends in to the environment, visually, quite well. It’s plenty loud, by the way. I used the Stageman 80 in front of coffee shops, inside of underground tunnels and out in the driveway. The latter I found to be a wonderful way of naturally effecting drum loops with cool, natural environments. I could record loops and sounds coming out of the Stageman 80’s built-in speakers in tunnels, with my iPhone, and get some really cool reverbs, environments and FX in second generation recordings. 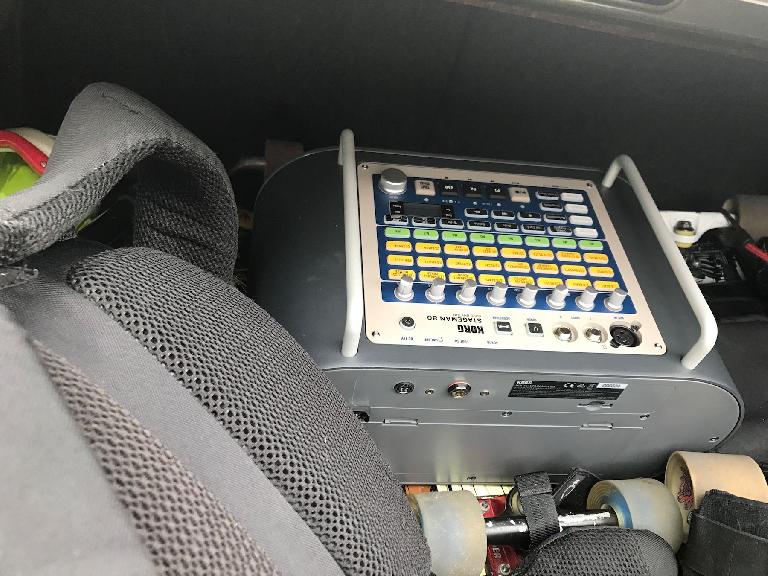 You can also record internal jams to the built-in SD Card based recorder, which was beyond easy to use. Special props to Korg for the tight, reclusive SD-card slot. It’s in the back, and there’s no chance of knocking the SD Card out. Simply press the SDCard button and hold down Record/Play. A small indicator gives you duration as you record along. It's a great way to capture what you’ve done or a way to incorporate backing tracks, should you desire.

The Stageman 80 can easily be an electronic musician's partner in crime. You can disturb the peace with it, just like an electric guitarist or rapper. You can use it for resampling! And you can play anywhere with a decent amount of volume. It’s like a boombox for musicians, while at the same time being a modest sound guy, that makes it easy for singer/songwriters that want to be heard without taking a year of reading. I think it’s a great product and I hope that Korg makes other Stageman devices like this, as I really think there is a market. Especially during summer time, when there are lots of outdoor parties and lots of lonely people with mini-synthesizer and drum machines. Rock out, dude!