Language
Featuring a keyboard, knobs, trigger pads, and touch pad the nanoKEY Studio from Korg is a wireless (or USB) mobile MIDI controller with some advanced features. G. W. Childs puts in a performance.

Korg has recently released a few controllers for the iOS platform. One of these devices, the nanoKEY Studio is a solution that is intended more for the portable musician and has a slew of features you almost wouldn’t know could be possible in a unit that is so small. In this review, I’d like to go over some of these features and fill you in on the nanoKEY Studio.

When I received the boxed nanoKEY, I was shocked. There are books bigger than the package that was laid in my hand. And that really sets the tone for the experience you receive with the nanoKEY—There’s a lot packed in there, but not necessarily physically. 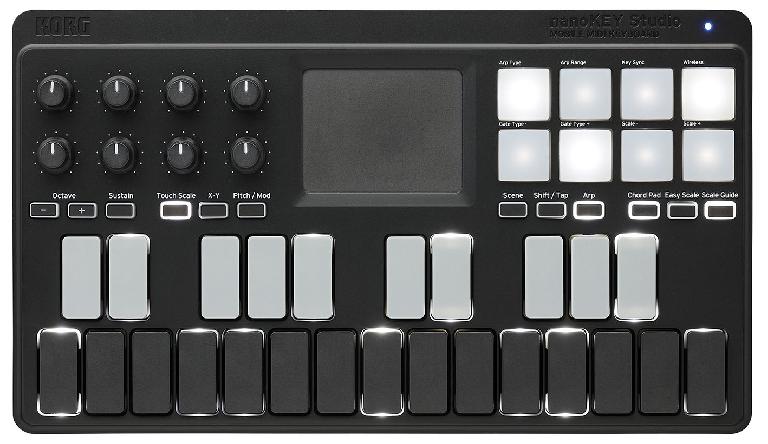 When I pulled the unit out, I initially felt a little jipped. The unit is extremely light, and gives off the impression of fragility. But a lot of things are illusory in the nano world, I discovered. It’s a lot tougher, and way more powerful than it looks.

I set up the nanoKEY Studio through GarageBand, and tried out some playing on some of the instruments. In addition, I did part of my review for Ruismaker using the nanoKEY, a very nice combination, I might add. Once the unit is connected, it’s actually a pretty incredible experience for such a small controller. Korg has kept up its reputation for bling by keeping the small keys, buttons, and pads backlit. When in the fully programmable arpeggiator mode, the LEDS animate the arpeggiator movements making this a really thrilling controller to use in dark environments. 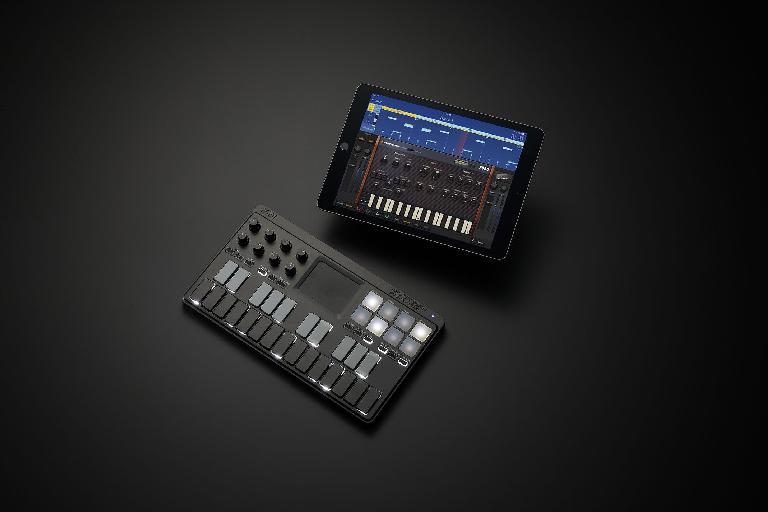 How Does it Feel?

The Rotaries feel amazing! There’s just enough tightness and just enough give to make the small knobs an extremely nice tactile experience as you glide filter sweeps with your finger tips. And, because you’ve got a fully functional Kaoss Pad that you can use for X-Y MIDI assignments towards your favorite mapped parameters, with aftertouch from the Kaoss Pad. In Pitch/Mod mode, you can most effectively use the Kaoss Pad as a pitch bender and modulation knob. Touch Scale causes the Kaoss Pad to begin playing MIDI notes based on particular scales assignable through the pads, explained later.

The keys are probably my favorite part. I have seldom had a good time with smaller keyboards, usually intended for mobile devices for both size, as well as responsiveness. The nanoKEY sports a two-octave keyboard that might feel a little flimsy at first. But, when you actually try it, you find that it’s extremely responsive and great for bigger fingers. Playing big chords feels very comfortable. So comfortable that you almost forget you’re jamming on an iPad, and not a real synth. 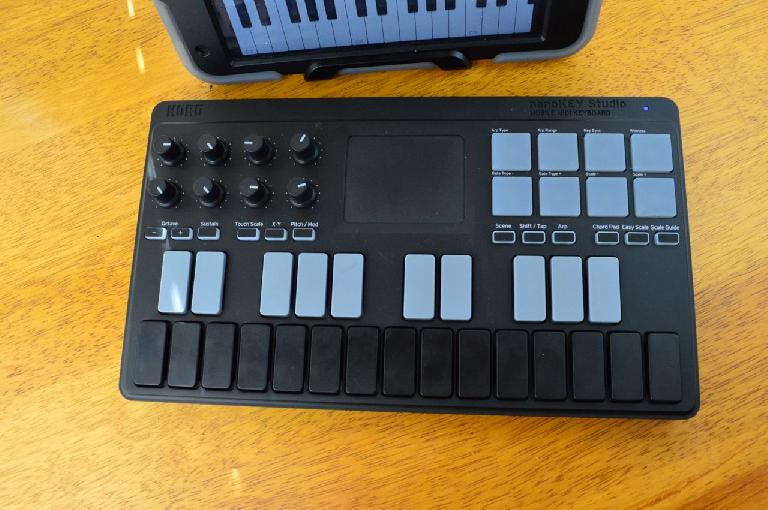 How Does it Behave?

Earlier in this review, I almost mentioned that there is a fully programmable arpeggiator on the nanoKEY Studio. Of course you get up and down patterns, as well as random. But in addition, you get a chord mode that is so handy when you’re trying to build up a track, and at the same time, give it a little rhythm.

I spent a lot of time in every arpeggiator mode for this review. And, there are things I do, and do not like about it. What I do not like is that the Bluetooth connection does not send, or receive sync that is needed to sync the Arp with a mobile DAW. However, I’m pretty sure this is a current Bluetooth limitation. So, I’m not going to rail. What I was impressed with though, is that the Tap Tempo function, utilized by pressing the Shift button multiple times in sync, is very effective getting that arp into the action. There’s even a Key Sync mode to restart the arp pattern, every time you press a key.

One feature that I really appreciated for the keyboard is the Sustain button. For people like myself that like to throw in a little piano here and there, this is a godsend, and finally makes me want to do some real musical work on an iPad. If I hold the Sustain button, it works just like a piano sustain. Holds the notes out, allowing you to create some somber piano parts on a moment's notice. You don’t have to worry about no stinking pedal, if you know what I mean. The only downside is that you have to hold down the button with a finger tip, as opposed to a foot, which, of course, steals one hand away. But you could also see this as a feature. For example: To the nearest cute cocktail waitress, at a club. “Miss, could I borrow a finger, please?” Best pickup line ever. And, you still get to sustain.

What About Those Pads?

The pads on the nanoKEY act as both percussive input devices as well as a control panel to allow you access other functions, like arpeggiator functions. Physically, the pads feel incredible, and the responsiveness is there. When you enable Chord Pad mode, you can trigger multiple chords, all of which are based on the current scale that is  assigned, also through the pads. By setting the Scale and Key ahead of time, with the current track you’re working on, you can set yourself up in a situation where you cut down on less misplayed parts, and keep the inspiration flowing.

The pads also allow you to access the eight different scenes that can be stored in the nanoKEY Studio, making it capable of bouncing between multiple apps and DAWs. And, before you ask, there is an editor, which is downloadable from Korg’s website. 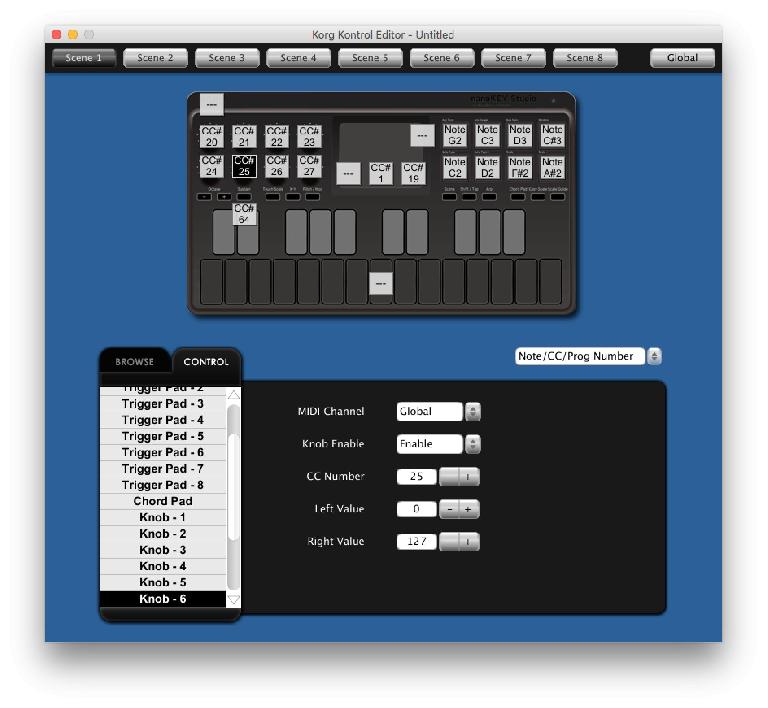 In addition to everything I described above, you also get some LE versions of certain Korg Apps for iOS. This part, I felt, was a little vexing. I don’t know why you wouldn’t just give away some of the full apps, instead of going out of your way to code an LE version. But, this is a little nitpicky on my part. Outside of the software, the device, itself, is unbelievable. It’s light, responsive and is great for generating MIDI with the arpeggiator, and Kaoss Pad. And, unlike some of its competitors, it works with USB, in addition to Bluetooth. And, while in that mode, Sync is received and transmitted!

Pros: An amazingly responsive and inspirational controller/instrument that has a cool, internal arpeggiator and is extremely light. You can really perform with it!

Cons: It’s not the most rugged controller out there. It feels a little fragile.