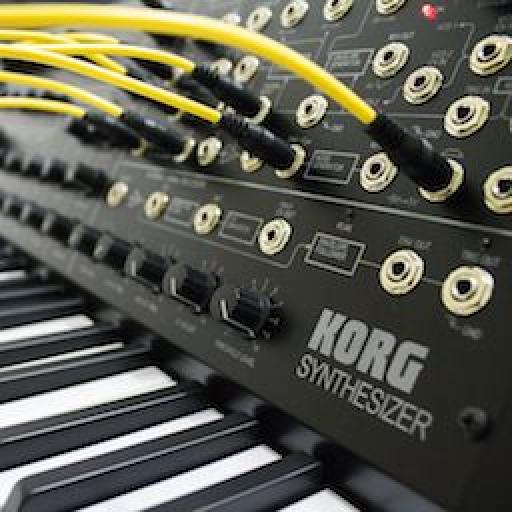 Language
Musicians often rave about analog hardware synths from yesteryear. So, what's it like to really get hands-on with one of the classics, re-imagined? Rishabh Rajan finds a Korg MS-20 on his doorstep. 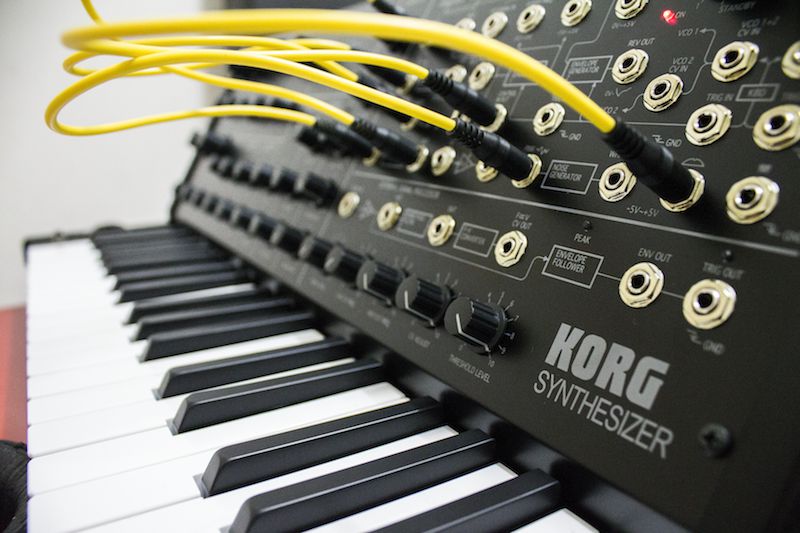 If you have been following the news regarding music product announcements this year (2013), you have probably already heard about the re-release of Korg's MS-20 in its miniature form. Despite this being a re-release, it may probably be one of the most significant (at the same time controversial) steps taken by a major electronic musical instruments manufacturer. The internet is abuzz with immense praise as well as heavy criticism towards Korg for doing so.

To summarize both sides of the story, some think it will be great to experience a classic analog synth from 1978 in the current digital era, while others think it's pointless to revisit old technology and Korg should instead be developing synths that are more feature packed, like the Mininova for example.

Now, I'm not going to touch that debate with a ten foot pole, but what I'm going to give you is a perspective of someone who never got to experience a vintage analog hardware synthesizer. I can safely say, there are currently more of us, than those who own, even just one vintage analog synth. For me, the biggest question has been, 'What's the fuss all about?'. Well now I can find out by spending just $600 instead of a couple of grand.

What's in the box

The MS-20 mini comes with a universal power adapter, 10 patch cords, a reprint of the original manual and the settings examples document, which shows you how to patch together some sounds. In addition to this, there is also a new manual that covers some of the features relating to the MS-20 mini specifically. There are no USB or MIDI cables provided. 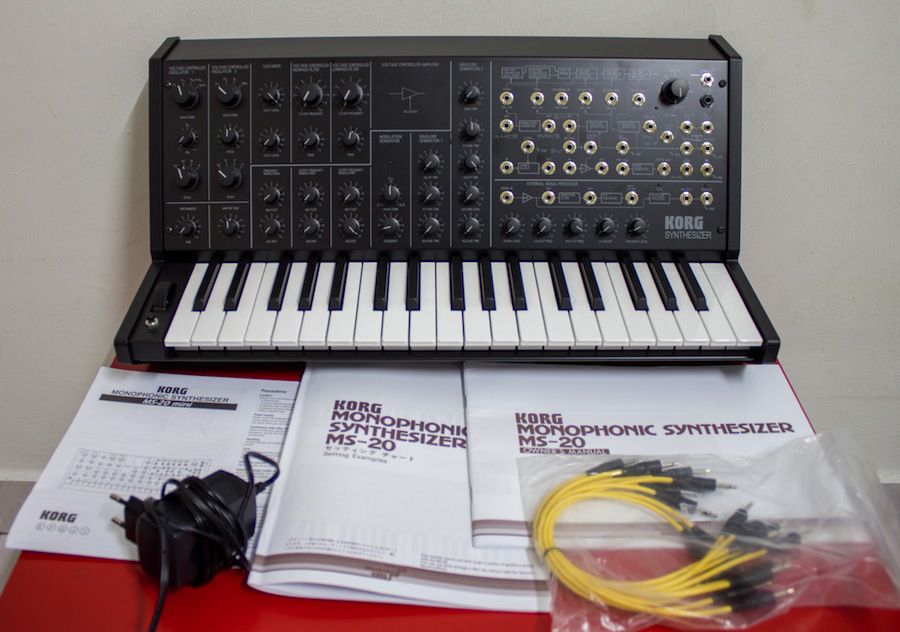 The contents of the MS-20 box.

The MS-20 mini is a semi-modular synthesizer with 36 dials for the various controls of the synth and a patchbay section which opens up a variety of modulation and sound shaping possibilities. There is a control wheel as well as a momentary switch that can be assigned to control specific parts of the sound via the patchbay. The keyboard has 37 keys which are somewhere between full size and mini-keys. I'm not a keyboardist, but I find these keys to be very playable. I'm also not a big fan of the mini-keys so I'm glad Korg stayed away from those. It also has a headphone out with a 33 Ohms impedance and a mono signal out at 3.5 KOhms impedance.

Now the one thing that makes this MS-20 different from the original is that it sends and receives MIDI. There is a type-B USB connector and a 5-pin din MIDI IN connector available on the MS-20 mini. Unfortunately, the MIDI implementation is very minimal. It pretty much only receives & sends (via USB only) note ON/OFF messages with a fixed velocity. In fact, it completely ignores MIDI velocity information received but sends a fixed velocity of 64 for all note ON messages. It sends MIDI note numbers 48-84 (since it only has 37 keys), and it receives note numbers 12-91. If notes higher than 91 are received, it will stop any currently playing notes, but if notes lower than 12 are received, they are just ignored and the synth will continue sounding any currently playing notes. The only MIDI CC message it accepts is CC 120, for the 'all notes OFF' message.

This synth weighs in at 4.8 Kg / 10.58 lbs making it, not a very bulky device but considering the unique shape, also not a very portable device.

This is probably the most difficult part for me to comment upon, especially if you want to know how it compares to the original. I've already mentioned that this is my first analog hardware synth so I don't really have a frame of reference in that sense. There are a few people out there that will be able to give you a very subjective opinion based on their years of experience using vintage hardware synths, but what I'm about to give you is an objective comparison of the MS-20 mini with the iMS-20 (iOS app) and the MS20:Legacy plug-in. I'm guessing most of you have at least one of the three, mentioned above. I know it would be really interesting to compare the MS-20 mini with the original one from 1978, but I personally find it more interesting to compare it with the software or iPad version to find out what this whole 'analog goodness' is that people keep raving about. I'm also interested to find out if the iOS version or the plug-in version can suffice to get that classic MS-20 sound.

People talk about how analog synths tend to go out of tune easily, but I haven't had that issues with the MS-20 mini, yet. The issue I found was to get the two VCOs perfectly in tune. This is not an anomaly, it's just the way analog synths are. It also sounds a bit more natural to have that beating effect when the two oscillators are slightly out of tune from each other. If you are new to the analog synthesis world, you may find this a bit annoying. 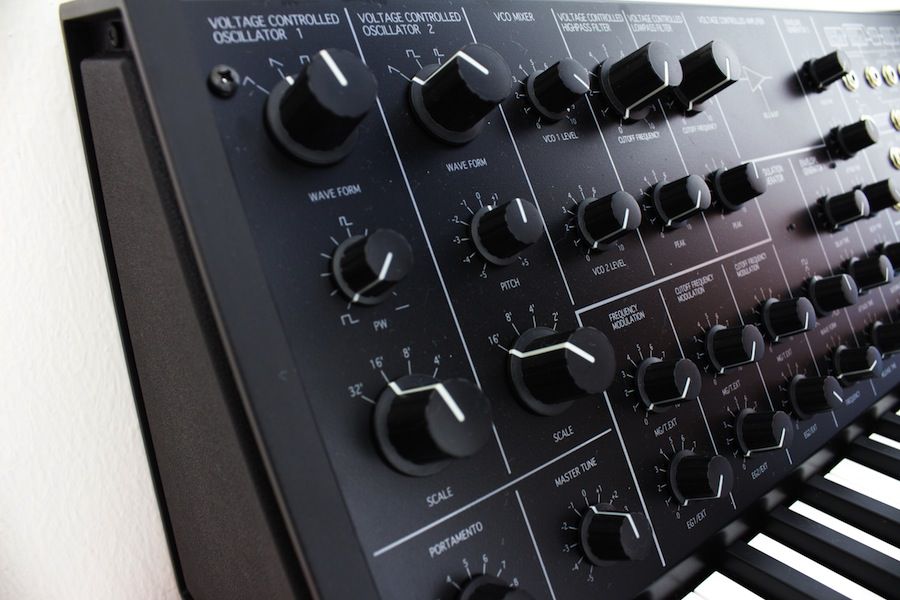 Let's have a look at the sawtooth & square waveform from the VCO on the mini. You may notice that these shapes are very unlike what we have generally known these shapes to look like. The variation in shape is probably due to variation in the level of the upper harmonics.

Sawtooth waveform from the MS-20 Mini.

Square waveform from the MS-20 Mini.

Now lets look at the same shapes coming from the MS20:Legacy & the iMS-20 iPad app.

Sawtooth waveform from the MS-20:Legacy Plugin.

Square waveform from the MS-20:Legacy Plugin.

Sawtooth waveform from the iMS-20.

Square waveform from the iMS-20.

These shapes look more like what they are expected to look like but there is still some minor variation in the upper harmonics. The MS20:Legacy shapes are smoother indicating lesser upper harmonics while the iMS-20 shapes have the sharp ends which translate to louder upper harmonics.

Sometimes seeing is believing but listening can make things even more believable especially when it comes to evaluating the filters on a synth. It is said that the filter is the most defining part of a synth and this can definitely be said of the filters on all the iterations of the MS-20. Now, most hardware synths will give you just one filter (low pass) but the MS-20 mini has two, a low pass & a high pass filter.

Let's have a listen to a saw wave filtered through the low pass filter with a resonance set to halfway. The cutoff of the filter is set to its lowest and is modulated by an envelope which is also the amp envelope.

Now, the same filter and envelope settings but with a square wave.

You will notice that the filter doesn't have that self-oscillation that is so common with analog synths when the resonance is turned up. Although, here the resonance is only set to the halfway mark. Let's hear the same sounds recreated using the MS-20:Legacy plugin & the iMS-20.

Clearly, the resonance makes the cutoff modulation more defined. All three devices sound different though the iMS-20 and the MS-20:Legacy are a bit more similar.

Let's now hear the same sounds from all three devices but with the resonance turned up all the way.

The self-oscillation is quite evident in all the three devices but yet each has its own character. I would say the iMS-20 is the weakest of the lot and the mini seems to be quite characterful though the MS-20:Legacy is quite close to the mini.

The great thing about having a semi-modular is that you can create some interesting variations to a sound which would be impossible with the standard modulation controls. Now since this is semi-modular, not everything can be patched everywhere. One of the major things I miss is the ability to modulate one VCO with another or using the VCO to modulate the cutoff frequency or pulse width of the square wave. This kind of audio rate modulation can lead to some really unique timbres. But even with that missing, there is quite a lot of interesting sounds that can be created via the patch panel. 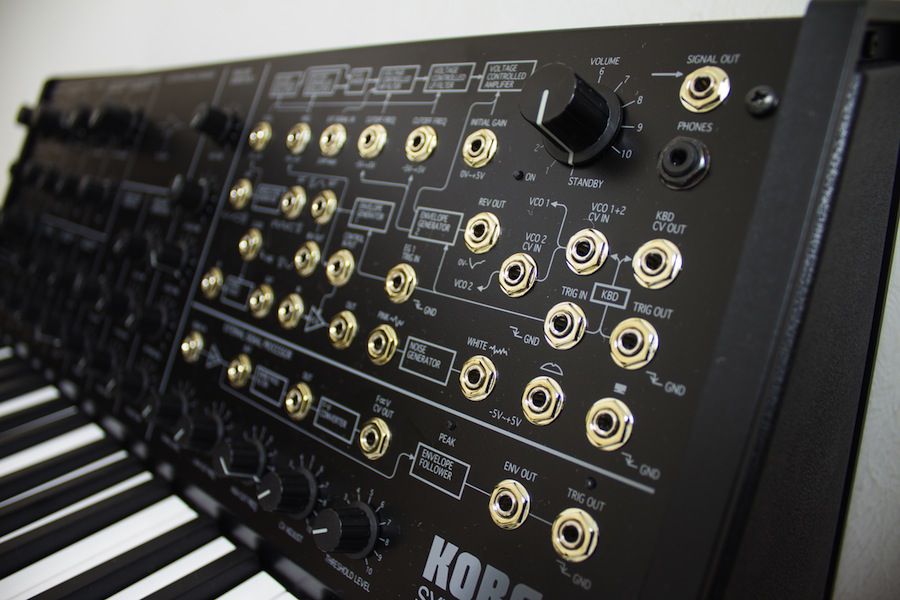 I especially like the availability of the sample and hold module that can affect the VCO, VCF cutoff or even the VCA. You can even input a mono signal to the synth and process it with the filters. Another way to use an input signal is to send it through the External Signal Processor (ESP) which can track the pitch of the input signal and trigger the internal VCOs. It even has an envelope follower which can track the amplitude shape of the input signal and that envelope signal can be used to modulate other parameters of the synth. This section opens up some really creative possibilities which would otherwise be impossible on standard analog synths. The only thing that can beat this is a fully modular synth, but considering the price difference, that's not even worth debating.

If we were to evaluate this synth as one that is released in 2013 and compare it with other manufacturer's products released around the same time, there would be quite a few drawbacks on the MS-20 mini to consider. Firstly, there is no ability to save or recall patches. Considering that there are physical cables involved, this would be impossible anyway. MIDI is not quite implemented as well as I'd like. There's no velocity response, no real Continuos Control messages and definitely no program change messages implementation. It is a monophonic synth so creating harmony would involve layering one take over another. I believe this is what Wendy Carlos did with her Switched on Bach album, though that involved Moog synths.

I would recommend this device to anyone who has never owned a hardware synth and wants to have some modular control over the device, other than the basic hardwired envelopes and LFOs. I would also recommend this synth to those who already own hardware synths but don't have this modular capability. The other option is a fully modular synth, which is rare, expensive and can get way more bulky. Finally, I would also recommend this synth to music educators as the layout and patch panel will make teaching & learning synthesis techniques a lot more intuitive & fun.