A natural-hammer weighted keyboard with a huge sound library, slick sampler, loads of drums and amazing effects. It even has an audio interface - what's not to like?

It’s been a while since I got to spend any time with a full-fledged workstation keyboard. Thankfully, I got to do it with the 88 key version of Korg’s Kross2 - not only a powerful workstation but also a very expressive instrument with keys that feel a lot more expensive than what you’re paying. In this review, let’s check out  the 88-key Kross 2, and see if it really does have all the bases covered.

If you’re used to playing 88-key workstation keyboards, then you most likely will not be overwhelmed by the enormity which is the Kross 2-88. Out the gate, if you’re even thinking about purchasing this beast and you know you’ll be gigging with it, you will want to get a case immediately. The poor man’s case will not work, in the sense that the box is over 6’ in height. You need a strap of some sort, or a couple of Rhodeys. It’s actually not a heavy keyboard at all. It’s just long. So you find yourself bumping in to things. Trust me, get a case! 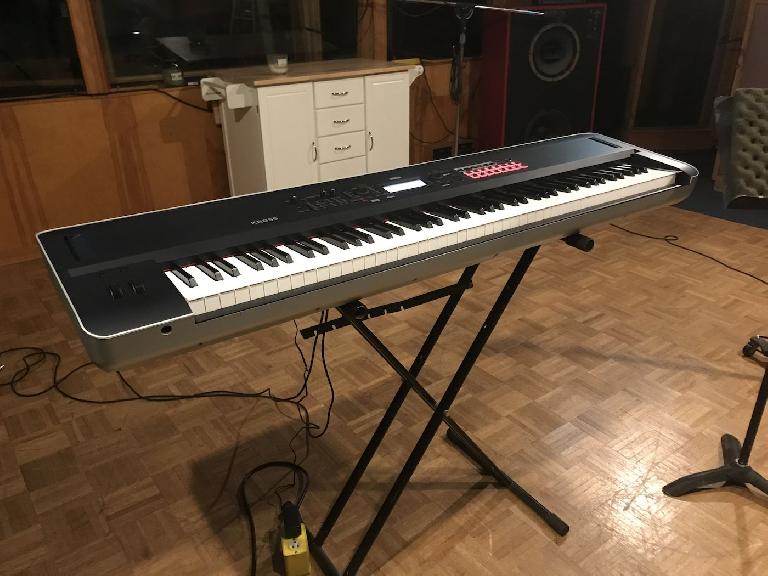 What is amazing is that you get easy access to the batteries. Yep, and yes, you actually get batteries. To the left of the Kross 2 88’s interface, there is a large battery compartment that houses an additional compartment for backup batteries or a USB cable. An additional compartment that can hold anything you’d like is on the opposite end of the interface as well. It might seem odd that Korg would turn a workstation keyboard in to part tackle box but it’s actually pretty cool to be able to take the power supply, roll up the cables, drop them in to the panel of the keyboard and close it up rather than storing the wall wart in a separate bag. Nice work, Korg!

Pianists will enjoy the Kross 2-88. The keys are quite pretty to experience as well as visualize. The natural weighted hammer action of the keys isn't quite the same as the Yamaha grand I’m used to rocking but it’s still a beautiful feel. The lower keys are even heavier than the higher keys, just like a real piano.

Overall there’s a nice, rounded bounce, as the keys push back. And the whole keyboard is safely nestled inside of a very inclusive chassis which means that you’d have to really hit the keys from the top down to really damage them. There’s no chance of them getting hung or anything like that. 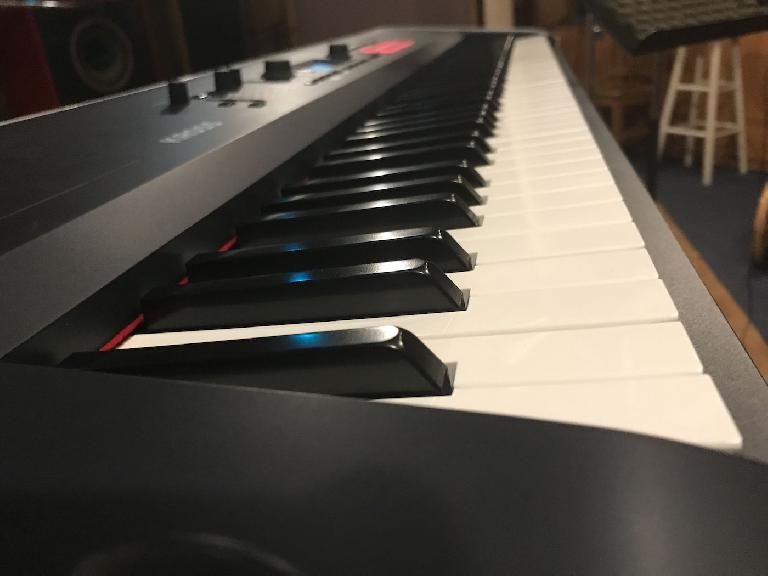 The buttons and knobs, by the way, are not going anywhere. Tightly attached and gloriously rubberized, they feel tight and slightly powdery. The sample pads are very similar and cry out for your fingers to touch them.

Where’s All The Bling?

When Kross 2-88 arrived, I sort of expected to be blinded by LEDs and wooed with the colorful patterns as they move across the surface of the keyboard. Not as much of that happened as I thought. At least, not like the Electribe 2. This is okay. The LEDs that are there are informative and the central screen in the middle is very clear as well as informative. Though thankfully you are not limited to controlling everything through the small screen. You can use your laptop, computer, or even an iPad/iPhone. Yep, Kross 2-88 works with Korg’s Module App as well as Korg’s Gadget.

In addition to being able to trigger notes in either of the apps through USB, Kross 2-88 is also an stereo audio interface, making it a great all-in-one purchase for a would-be producer. As it’s a controller, an audio interface, an effects processor and a sampler, it can be a one stop shop for music. And it can greatly accentuate a DAW/computer experience as well. The effects, sounds and instruments sound great, and you’ll want to use them. 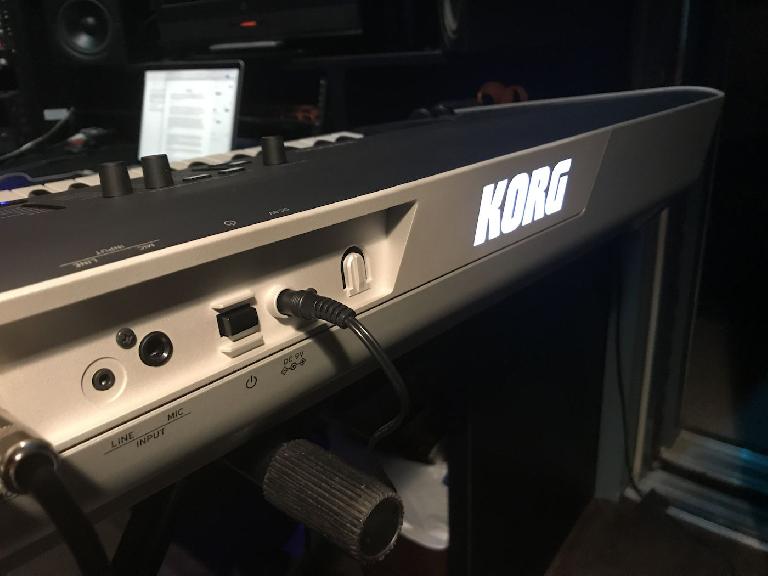 Like most workstation keyboards, there is a Program mode, where the included sound patches can be showed off in an optimal, internal mix, where effects are set, and everything in that mode is dedicated to basic playing - unlike SEQ mode, which is designed for multiple, internal, programmed instruments to share resources like effects and polyphony (120 voice). There is also a Combi mode where you can layer, stack and split up to 16 programs or patches at once. There’s also a Layer/Split mode for setting up quick performance splits, like Piano & Strings combinations on top of one another, or piano in the higher octaves, strings in the lower octaves. 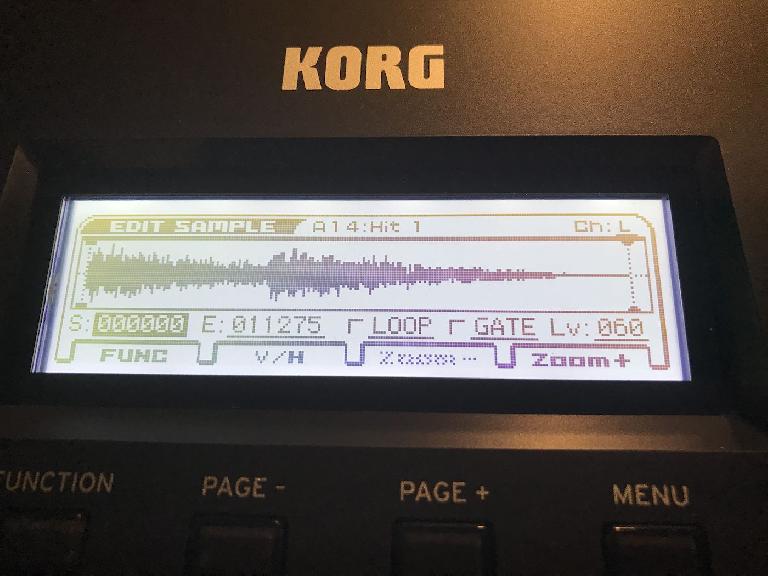 The patches within Kross 2-88 are all very well produced, and you can tell the development team spent some time EQ’ing and balancing all of the patches, instruments and the categories they represent. At first I was a little nervous as the pianos, when dry, came off a little thin. But they made way more sense when I started using them within a sequence, and applying effects to them.

Strings and pads are also quite nice within the Kross 2 palette. I had very little difficulty creating a cool scene, where strings glided over the top on the wings of a deep, ethereal reverb. It took very little effort to set up. Especially when using the Realtime Controls that give you quick access to Envelope Times, Effects, Audio Inputs, Filters and all the things a keyboardist constantly needs to tweak within a patch during performance, and live.

In addition to having dedicated drums, a dedicated sequencer, an amazing keyboard, insert, as well as master effects, Kross 2 is also a sampler with 16 dedicated sample pads that also double as a step sequencer. The step sequencer is dedicated for the use of the drum track. And I’m happy to report that the drums sound as amazing as you’d expect from Korg. 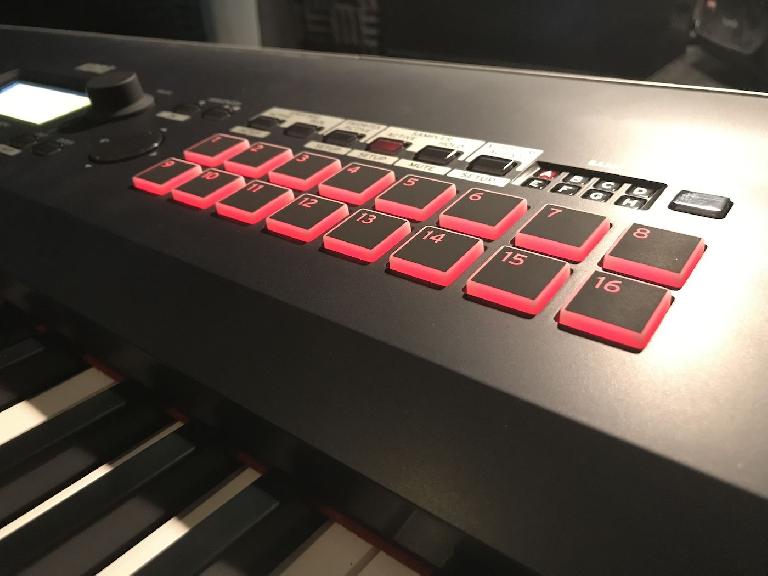 The sampler is actually pretty slick and has a dedicated audio input on the back, next to the mic input. There’s also an SD card storage slot available back there as well. The pads in sample mode are extremely responsive and having the ability to sample on the fly, drop things in and be spontaneous with controls, apart from the keyboard, I feel, makes this a great workstation for idea generation, album creation, theater, and live performance. The sampler just adds another level of usage that’s not usually there with 88 key keyboards. It’s even got a 1/8” line input, so phones and Walkmans can be easily hooked up for some fun sample sessions.

Kross 2-88 is an amazing axe for studio, live, and session. It’s huge! It’s definitely going to require a little time behind the manual but if manuals aren’t your thing, Korg did create a pretty massive video walkthrough on the Kross 2 pages, going through more than just the basics. What you’ll get, once you learn Kross 2, is a machine that is highly adaptable to many different situations and has a sound that you will more than rely on. It’s also a great controller keyboard for DAWs, as the keys are highly expressive though sadly, do not have aftertouch.

Cons: Huge! Needs a case. It’s very easy to ding the exterior. No aftertouch. No XLR for mic input, like Kingkorg.