When Korg recreates one of its own classic synths in iOS format, the results are always worth paying attention to. So how did G.W Childs get on with iMono/Poly for iOS?

Recently, Korg has returned with another powerhouse of a synthesizer for iOS. And as usual, this is not an app that you can in good consciousness ignore. In this review, let's take a look at why the iMono/Poly for iOS is both important and relevant to the synthesizer community as a whole.

As usual, and as one might expect, the interface is clean and sweet. And, amazingly responsive, even on an iPhone 7’s smaller screen. I was initially excited about the product, as I really enjoy getting a secondary synth out of my iPhone. And thankfully with Bluetooth support that was exactly what Korg was thinking as well. Through the MicroKey Air, I was able to really rock out with the iMono/Poly. Believe me with the sound they've captured and pumping through a nice set of speakers, the iMono/Poly rocks quite well!

The Korg Mono/Poly was originally released in 1981 alongside the PolySix and rocked four VCOs (Voltage Controlled Oscillators) with two LFOs and a very sweet arpeggiator. Because of the VCO Sync and modulation possibilities, Korg really scored a hit with a synth that wound up powering acts like Juno Reactor and the Chemical Brothers. Korg has done an amazing job of not only paying homage to one their prodigal sons, but they’ve also added a few things that are very exciting. 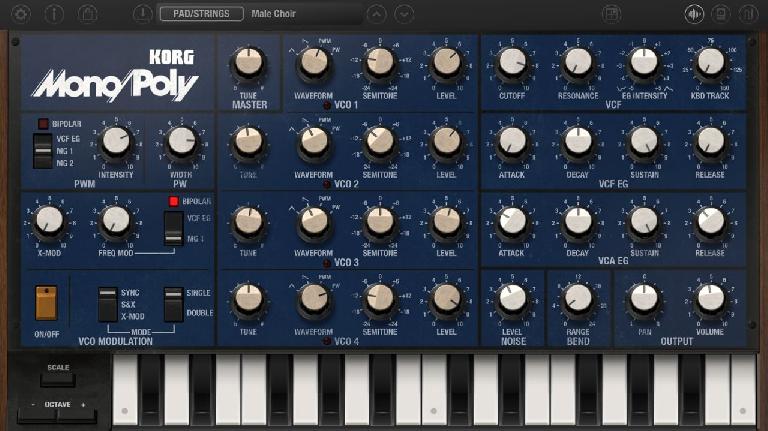 As expected, the Kaoss pads made it into the iMono/Poly release and as usual open up an unbelievable portal of expressivity and creativity. For example: the left pad can be assigned both X and Y to a slew of different parameters within the synth with destinations like Unison Spread, Output Volume all the way down to particular VCO parameters, individually with the the existing four. Whoever put this together really spent some time on it! 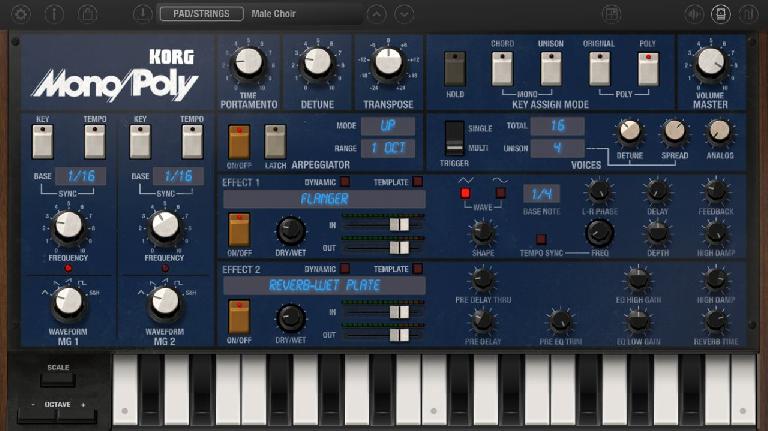 As I mentioned earlier, there are many patch destinations for both the Kaoss pad assignments. But what I didn’t mention is that there are also two virtual patch bays residing within the iMono/Poly that take the ancient synth safely into modern times, making it damn near modular. Modulation Generators 1 and 2 can be assigned across multiple destinations at once and even aftertouch is available as a source, opening up the possibilities for added modulation via MIDI controllers that have aftertouch, or just using aftertouch within your DAW as a modulation source.

This is where Korg went above and beyond. The iMono/Poly sports 20 effects that are both helpful as well as beautiful. Mainstay studio effects fill the roster along with several more club friendly effects. For example a multi band limiter can be run side by side with the Talking Modulator (which acts as an additional formant filter). Or you can employ the PolySix Ensemble effect side by side with a Multi-tap Chorus/Delay. 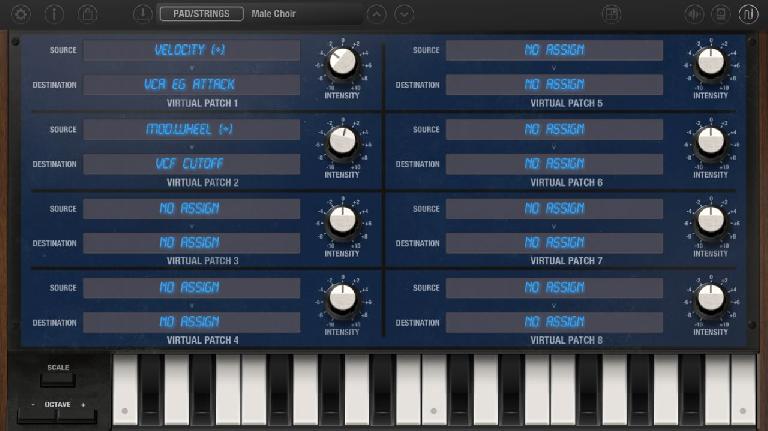 The iMono/Poly was a big hit with me. I suspect that I won’t be alone as both the features and the presets are sure to be a hit with many different genres of musicians. Korg has already released a patch bank for a measly $5 that adds many more presets to the tiny synth. The price is a little bigger than we’ve seen Korg release a synth for in a while. However, I would also like to point out that this is a much bigger and more fully featured synth than I’ve seen out of Korg, in the iOS dept in a while. With additional courtesy features like being able to CC control virtual patch cables, live and studio players would do well to check the iMono/Poly out… fast.

Pros: A big, full sounding, 4 VCO synth that sports a huge assortment of pro-considerate features. Makes your phone or iPad one hell of a synth.

Cons: No internal sequencer which can make it a little lean for a first time user with no other gear. Very little documentation on the Bluetooth setup.

Learn more about Korg and iOS synthesis at AskAudio, Ask.Video and macProVideo.