Language
The new Komplete Kontrol S88 isn't merely a larger version of the S61, it features very expressive and playable keys, making this ideal for players who want the full Komplete Kontrol experience.

Along with the release of the Komplete Kontrol software version 1.5 that brings a bunch of important new features to the platform (like expanding it to other VSTs), NI has released the biggest and you might reasonably assume final model in its “S” keyboard series. Joining the 25, 49 and 61 key models is an 88-key weighted beast that’s designed for the more serious player.

I should qualify that last statement by saying that enjoying synth-action keys doesn’t make someone less than serious, but rather that there are some sounds—the most obvious example being acoustic piano—that are just so much more expressive when played with full-sized, weighted, hammer action keys. Those keys in this instance come from Fatar (as do the others in the series, though only semi-weighted), whose keybeds are well known in the industry for being very playable. Although I have many keyboards, the one I play on when I’m really playing piano is a digital stage piano, because of how great it feels. Hammer action keys are just a requirement for some players.

The S88 is a full-sized keyboard but not quite as heavy as some, at 14.4 kg. It’s functionally identical to the other models in the series, with MIDI I/O on the rear panel as well as inputs for expression and sustain pedals. There’s no sustain pedal included and although these are inexpensive to add yourself, it’s a bit of a shame on what is really a player’s keyboard. You connect to your Mac or PC over USB (power is supplied separately) and use the Komplete Kontrol software. The idea of course is that you can do many things without reference to the computer.

You navigate using the section to the right and this has Browse, Preset, arrow and other keys as well as a jog dial. This talks directly to the software and all your visual feedback is from the nine displays across the centre. For any loaded instrument you get a number of pages of controls, pre-mapped to the touch-sensitive knobs for tweaking. In the new version of the software this extends to compatible third-party instruments as well. To the left are transport controls and further left still, two configurable touch strips that handle mod wheel and pitch bend, as well as octave buttons.

Like the other S models you get NI’s innovative Light Guide which shows using colored lights any active key splits, maps out scales and displays arpeggiated patterns. The MIDI modes can “knock out” incorrect notes so they can’t be played and also generate complex runs from single held keys and chords. With 88 keys available, you obviously get more real estate to play with when it comes to splits and arpeggios. The MIDI generated can be recorded in your DAW or routed to external MIDI kit, and the instrument also works in generic MIDI mode with any MIDI-capable software, a Controller Editor app available for setting up your own maps. 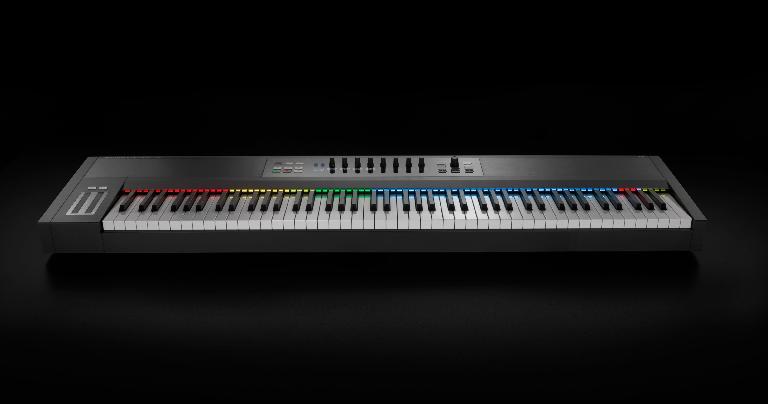 The Komplete Kontrol S88 is excellent to play.

The keyboard itself is excellent to play, with just the right amount of resistance for piano yet not too stiff for runs if you’re playing organ sounds. Pair it with a sustain pedal for even more expressive playing. There’s a lot of empty space on the top surface but I think NI’s decision to retain feature parity across all S models is the right one for the sake of workflow and simplicity.

Pros: Really expressive and playable keybed. Get the most out of piano and orchestral sounds. All the goodness of the Komplete Kontrol system. Light Guide, touch sensitive controls and touch strips. MIDI generators for advanced part creation. Works with external MIDI gear too.

Cons: No sustain pedal supplied as standard. The S61 is cheaper, if you can live without weighted keys.