Language
Native Instruments recently added an 88-key model to Komplete Kontrol. Along with that release was Komplete Kontrol 1.5 (software) which adds a slew of tasty new features like 3rd-party VST support.

When Native Instruments released their Komplete Kontrol keyboards they also debuted the Komplete Kontrol software. This is a plug-in host and itself a plug-in (it runs in either mode) into which you could load the latest versions of NI’s instruments and then use all the specialized functions of the hardware with them. This included things like Light Guide, Native Map, Smart Play and tag-based browsing. Although the hardware would work with any MIDI gear, the really clever stuff happened when you combined it with the Komplete Kontrol software.

Early in 2015 I heard from NI that they were working on opening up the platform to all VST plug-ins. And although it’s taken a little while, the 1.5 update does just this, and indeed rather more. The company has created a new plug-in format called NKS, or Native Kontrol Standard, and developers will be able to make their instruments compatible with it so that they enjoy the same deep integration with the KK and Maschine hardware as NI’s own tools. 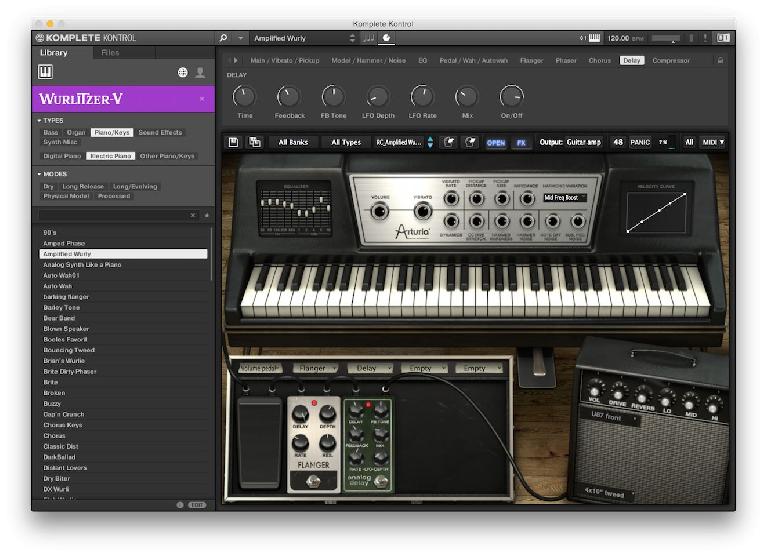 Third-party instruments can now work as seamlessly as NI’s own.

Not another plug-in format!

Before you start fretting about yet another plug-in format to cope with, it should be noted that NKS isn’t like the difference between AU and VST, or AAX and AU—it’s an “extended” format which adds functionality rather than being a complete rewrite. As such, NI states that updates to third-party plugs to bring NKS compatibility will be free rather than rolled into paid updates. This will encourage users to get involved in NI’s hardware ecosystem and from the developers’ point of view, lets them boast of greater compatibility with hardware. Having played around with the technology (and I stress I’m not a developer), it feels like it’s mostly about mapping controls to certain standards, which isn’t spectacularly difficult if you’ve already built a whole software instrument.

At launch there are a fair few big-name developers already on board or about to come on board with compatible updates. These include Arturia, Heavyocity, Softube, Spitfire Audio, U-He, Output and more. A specific list can be found on the site and not every instrument from every company will get compatibility, but this list can only grow as time passes. Arturia has the most at present with its whole V Collection 4 already set up to work with Komplete Kontrol.

As far as NI’s own instruments go, not all that much has changed in terms of interaction between the hardware and software so I’m not going to dwell on it. As you’d expect, integration is seamless but it’s the expansion to third-party instruments that’s the real news. Let’s start with the instruments that are already compatible at the time of writing. I was able to test Arturia’s V Collection to see how the linking actually worked in practice.

The first thing you get with NKS compatibility is a presence in the KK browser so that when you press Browse on the hardware your instrument appears under the relevant category. This is set by the developer so that drums always appear in the drums section, organs under keyboards and so on. You can select an instrument from the hardware and then use the navigation dial and arrow keys to filter using tags if you like. So you might choose a synth and then filter for patches that were leads, and with effects on. Compatible instruments get full tagging support in the browser.

The readout appears on the computer screen but the navigation can be done from the hardware. You don’t have to start by selecting an instrument, you could choose to view all presets across every compatible instrument, filter by type of instrument or by mode (meaning monophonic, percussive and factors like those). Tapping over to the presets list on the right, pressing the navigation wheel down loads that patch.

With a compatible patch loaded you get the clever visual feedback of the hardware via Native Map. So there are multiple pages of real-time controls that get mapped to the eight screens and touch sensitive dials, and you can flip between pages easily. The screens give very clear feedback with only the odd exception where a parameter’s name is by definition obscure, as with organ drawbars for example. You can page through and tweak everything from synthesis parameters to effects settings. 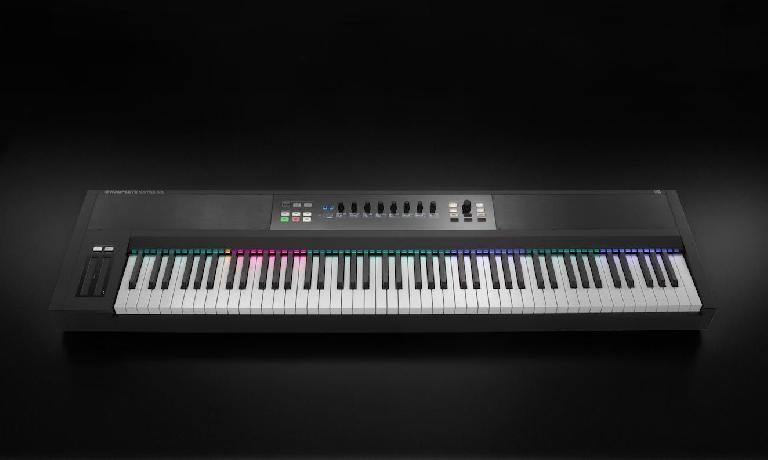 Light Guide is one of the things that NKS plugs can use.

With Arturia’s compatible instruments this worked brilliantly and provided far more intuitive control than using the mouse ever could. There’s the odd limitation such as the fact that effect sections for the Wurlitzer and Vox V are pre-mapped as expected but you still have to load an effect using the mouse, or save a preset with an effect loaded. You don’t seem to be able to load effects remotely although you can switch them on and off if they are already present. Still, it’s only a minor grumble. Compatible instruments can also use the Light Guide system. So for example when an instrument doesn’t occupy the whole range of the keyboard, the lights will show you that.

What about my old VSTs?

Let’s turn now to what you can do if your favourite plug-ins aren’t NKS compatible yet, or indeed may never be. Well the good news is that you can still do a surprising amount. You don’t get tags or a place in the browser but you can still load any VST plug-in with the mouse inside the KK app. Presets aren’t visible to the hardware either, but your instrument’s software interface still works just like it should so loading and saving behave as expected. All the stuff that gets sent as MIDI from the hardware like scales, arpeggios and the touch strips works here like it does with any MIDI destination. Edit and create your own maps to link the hardware to instruments not yet officially supported, or indeed tweak those that are.

The parameters inside your non-NKS instrument aren’t specifically mapped to the Native Map system but many of them do appear nonetheless. So you still get multiple pages of controls with names, that can be tweaked from the hardware, they’re just not arranged specially for the hardware by default. NI provides a free Controller Editor app so you can build your own templates for hardware (when you flip into standalone mode) but crucially this is also possible from inside the software. Enter Edit mode and for any of the multiple pages of controls you can reassign dials to control any available parameter, and thus make your own controller presets for any VST instrument. Scale and Arp settings can also be made here and are remembered with a preset.

The 1.5 update is free for existing users so it’s a no-brainer. The more important question is will it bring more musicians into the world of NI’s KK and Maschine hardware? I have no doubt at all that it will. Since the KK keyboards have the exact same set of controls, differing only in the number of keys, you can spend just £369 for the 25-key model and still get all the hands-on tweaking. Or go for a larger model for more expressive playing. It’s worth mentioning that the Komplete Selection of ten instruments comes bundled with any model too. NKS-compatible instruments are ready to rock and the numbers will surely grow quickly. Even without that, you can easily save your own maps with the new software. NI is opening up its walled garden to your favorite VSTs, so come on in. The water’s lovely.

Pros: Brings compatible third party VSTs seamlessly into NI’s hardware world. Pre-mapping means everything is taken care of. Existing VSTs can still take advantage of many features. Edit and save your own maps in the app. Standalone for live performance or plug-in for the studio. Updates for NKS compatibility will be free.

Cons: Not every single thing can be done remotely, like loading effects inside certain instruments. Limited to VSTs, at least for now.