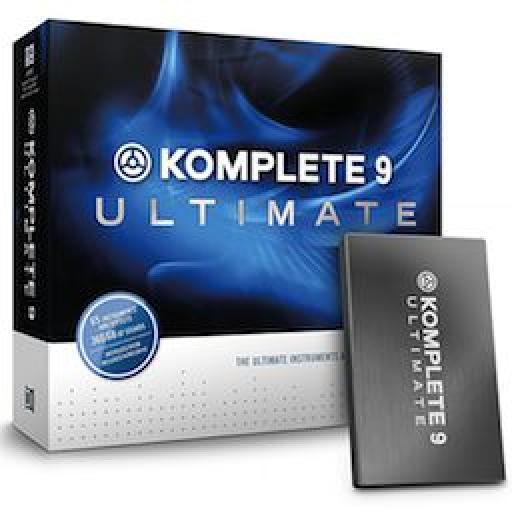 Language
Where do you start with a product like Komplete 9 Ultimate? It's just so massive! Toby Pitman finally emerged from the gargantuan task of exploring all of NI's flagship product and wrote this review.

Where do you start with a product like Komplete 9 Ultimate? It's just so massive! Native Instruments flagship bundle includes every product they have to offer (that doesn't require a hardware counterpart i.e Maschine or Traktor) and is by far the most comprehensive software bundle on the planet. 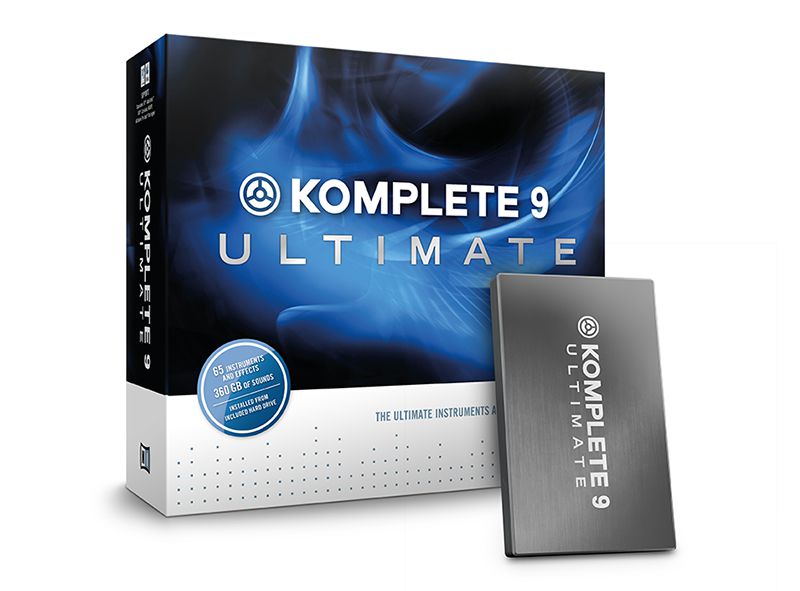 Packed with 65 products, it weighs in at a whopping 370 gigabytes which ships on its own portable USB2 drive. Just plug in the drive and select a destination folder and your off. It still takes around an hour to install but given the size, it's not all that bad. Simply authorize the software in the Service Center and you're good to go.

The only thing that wasn't 'Komplete' was that the RC24 and 48 reverbs came as a separate download once the product is activated, but they're automatically authorized once installed.

Komplete 9 Ultimate features such a diverse range of synths, production tools and sound libraries that you could make any kind of music you want with it. So what's new and what do you get for your money?

Kontakt is arguably the most widely used and supported sampling platform in music production. The Kontakt 5 sample engine is extremely powerful and its KSP scripting features have allowed 3rd party developers to create some really wonderful instruments and libraries for it.

Kontakt 5 alone ships with a large and extremely useful and varied factory library covering a lot of ground and has some great 'bread and butter' sounds. Komplete 9 Ultimate adds over 30 (yes, over 30!) additional libraries from the likes of e-Instruments, Heavyocity and Scarbee.

New additions of note are two libraries from Heavyocity in the form of Evolve and Damage which are both superb! We also see Action Strings making an appearance too. 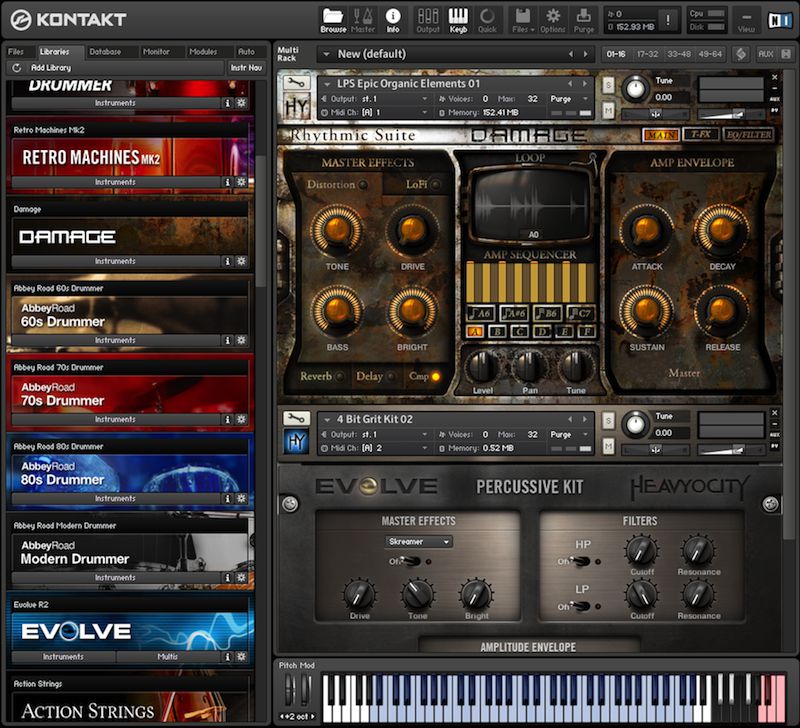 The products you get with Kontakt are alone worth well over the asking price of Komplete 9 Ultimate. You get a whole lot of quality sounds here from drums, basses, pianos, brass, vintage keyboards, organs, strings, cinematic percussion, world percussion, guitars, vintage synths and electronic drums. Plus all of Kontakt 5's powerful sampling features and effects.

And that's just for starters!!!

Reaktor is probably the flagship product of Native Instruments and it's where it all began for them. It's actually the first soft synth I owned way back when it was version 3.

Its powerful modular approach allows you not only to combine any supplied instrument, sequencer or effect that comes with the software, but also allows you to design and build any type of synth you can imagine from the ground up. It's probably the most powerful modular music software tool around. 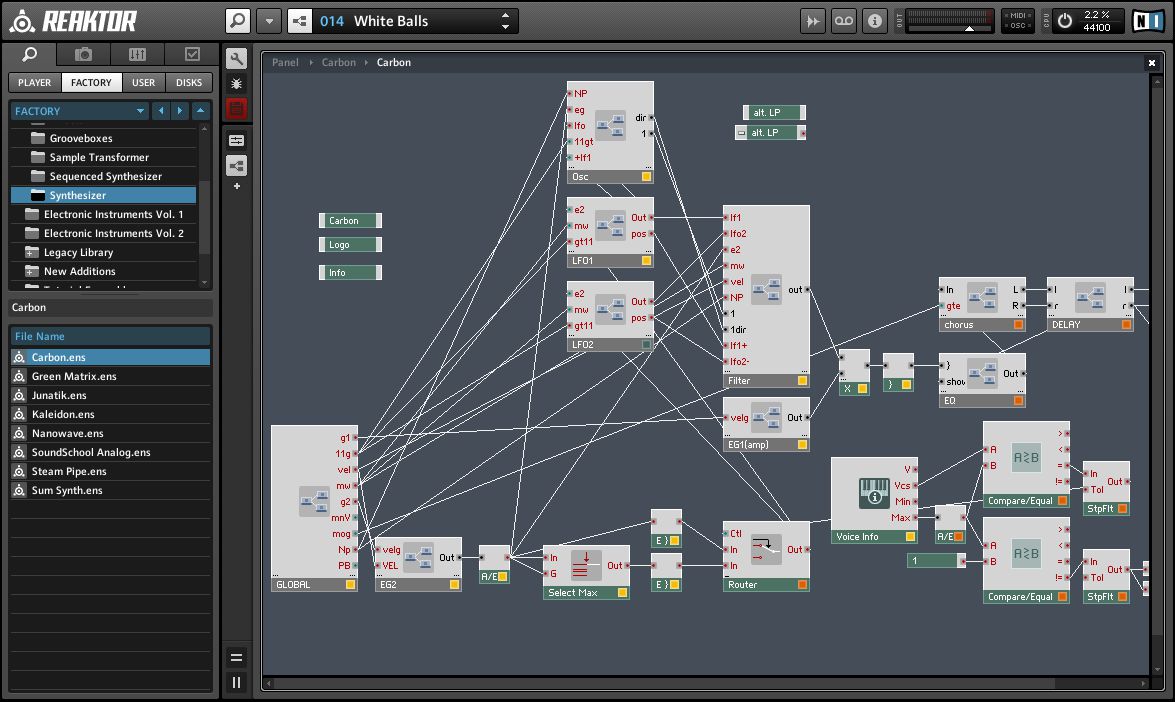 It comes with over 70 high-quality pre-made synths and gives you access to literally thousands more created by the Reaktor community. You also get a large number of effects ranging from granular processing to mastering tools. In fact, the shear amount of content that ships with Reaktor is to say the least, a bit overwhelming. There's so much great stuff here from Skanner XT, Razor, Vectory, Photone you'll need to put some serious time aside to wade through it all!

The newest member of the Reaktor family is obviously Monark, which faithfully recreates a very iconic analog synth and sounds fantastic.

If all this isn't enough for you, then un-zip the Legacy Library folder which is in 'Ensembles' in the Reaktor 'Library' folder. It should keep you busy!! 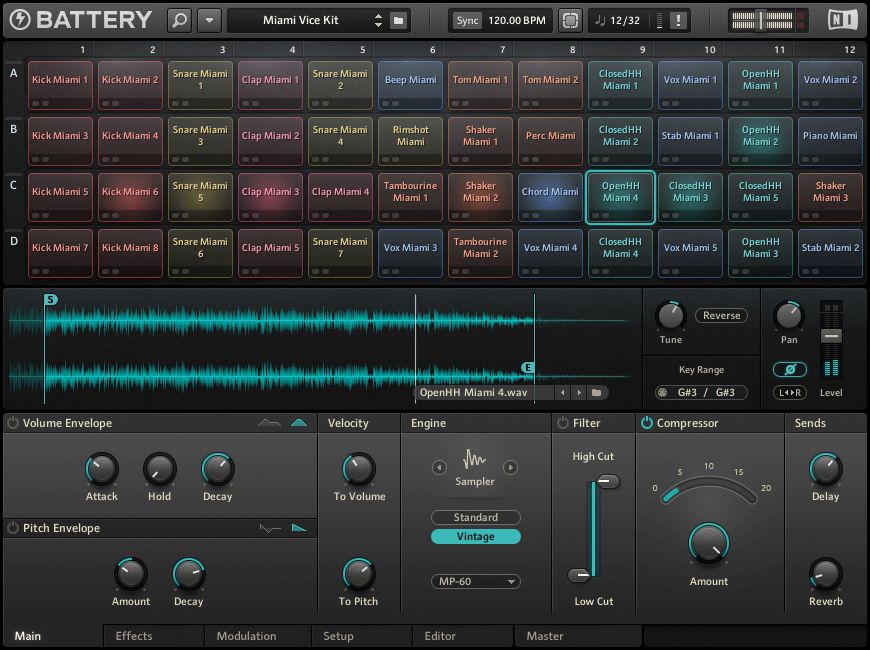 Battery 4 is ideally suited to electronic drums, and whether you're using a preset kit from the large supplied library or building your own, you'll find tweaking individual sounds and kits a whole lot faster.

So if that's not enough, you also get three of the best software synths around too, namely Massive, FM8 and Absynth 5. Each of these synths provide a unique set of features and cover a lot of ground.

Massive has already become an extremely popular synth, partly down to the fact it's just so easy to program, the other part being that it sounds great! It comes with an expanded library of add-on products like Massive Threat and Urban Arsenals 1&2 and is just about the most versatile subtractive/wavetable synth around.

FM8 brings you a powerful FM synthesis engine that's capable of producing some stunning sounds, from ambient bells to screaming aggressive leads. It's a lot harder to get your head around when it comes to building sounds from scratch, but worth delving deeper into.

Absynth 5 is another synth that can sometimes defy explanation. This powerful sound design tool features a complex envelope structure that is ideal for weird sonic landscapes or lush pads. Again this is another synth worth learning, and if that's not your thing, the added Spectral Expansion and Absynth Twilights packs should keep you busy. 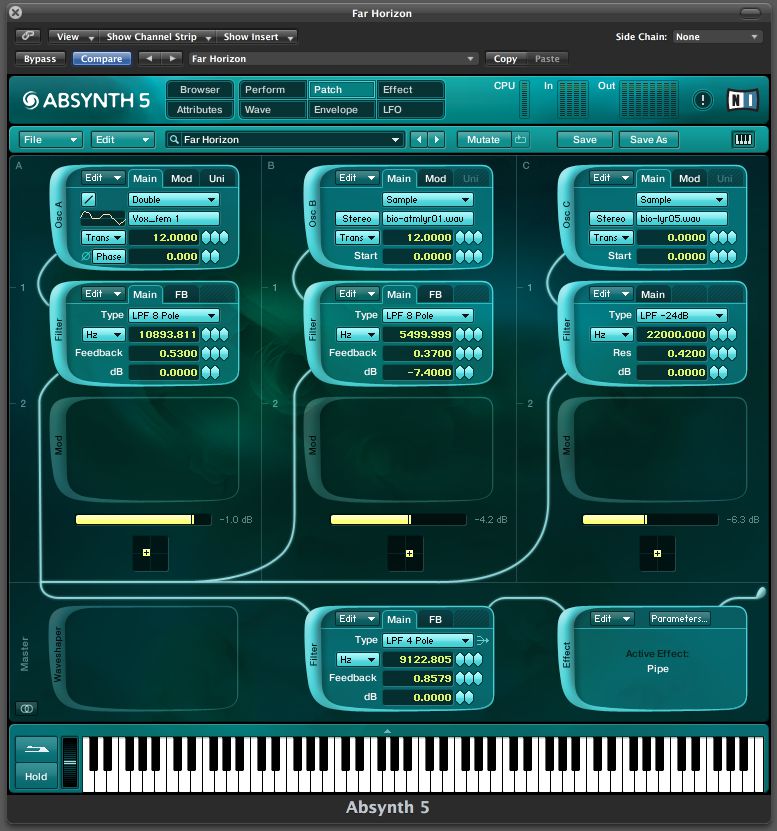 The effects included in Komplete 9 Ultimate can handle just about any job you can think of. There's so much on offer here you probably won't need anything else.

First off, there's Guitar Rig 5 Pro which comes not only chock full of great guitar amps and stomp boxes, but a wide variety of studio effects too. You'll also get Traktors 12, Reflektor and Ramfire add-ons. A one stop shop of awesome guitar and FX sounds! For mixing, there's a wide selection of quailty EQ and compression plug-ins from the Solid Mix Series, Premium Tube range and Vintage Compressors. Awesome reverbs from the RC24 and RC 48 as well as the Transient Master and distortion from Driver.

It doesn't stop there though, as Absynth 5, FM8 and Reaktor 5 can also be used as effects plug-ins too. Reaktor features two very creative plug-ins from Tim Exile in the shape of The Mouth and The Finger which give you some whacky performance based tools!

Komplete 9 Ultimate is so vast that if you were to just have this and a DAW, you'd probably not want for anything else. At $1,099 for the full version it may seem expensive, but when you consider you get around $7-8000 of software, it's cheap as chips! There's upgrade and crossgrade plans too.

If you make music for a living, then you probably already have this as it's an essential bundle of great software. If you don't have it, then it's definitely worth considering the investment. I'd say the only drawback is that you'll never fully be able to get through everything it has to offer.

It's the bundle to end all bundles!!!

For more information, go to http://www.native-instruments.com/en/products/komplete/bundles/komplete-9-ultimate