Language
Three new sampled pianos were included in the recent Native Instruments Komplete 10 upgrade, and a fine collection they are indeed as Lynda Arnold discovers in our feature review.

Native Instruments has unveiled 3 new sampled pianos in the latest update of Komplete. The Gentlemen, The Grandeur and The Maverick are all part of the Definitive Piano Collection developed in partnership with Galaxy Instruments. The Definitive Piano Collection features pianos from premier Germany manufacturers Bechstein and Steinway. Galaxy Instruments' previous contribution to the Komplete family was The Giant, the largest existing upright piano sampled to perfection. Galaxy used the same signature approach to sampling and instrument building when creating this next evolution of sampled acoustic pianos and the results are stunning.

All three pianos have distinct character but they were sampled in the same way. Each piano instrument contains close to 2500 samples, 18 velocity zones and separate overtone and resonance samples. There are even 9 key release velocity layers. This detailed sampling results in some of the most realistic sampled piano instruments I've heard, allowing players to access more subtle nuances while performing parts and recording. In the pictures below from the Native Instruments website, you can see the amount of microphones used in the sampling sessions in order to capture different aspects and perspectives of the sound. Galaxy then used all these recordings to build their Kontakt player interface. The Tone and Anatomy sections provide users with a chance to sculpt the sound to their liking and then apply a reverb using the Space section. These are some of the same controls built into The Giant instrument and are wonderfully incorporated in the Definitive Piano Collection. 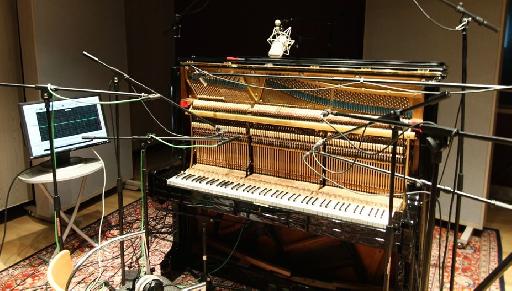 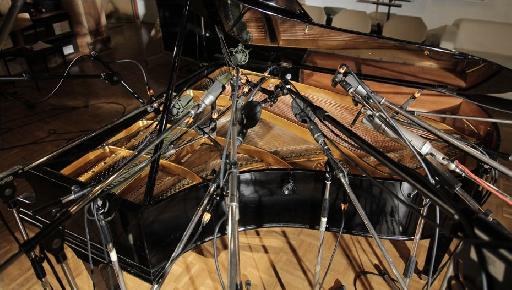 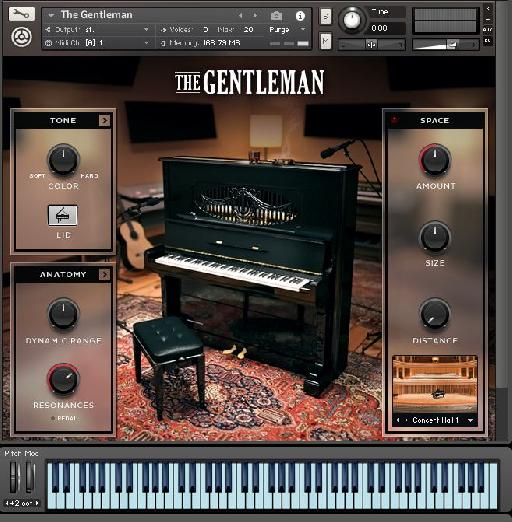 The Gentlemen is replicated from a vintage Bechstein Model A upright piano, originally built in 1908. The Galaxy team found this instrument still equipped with original parts and in great condition, a rarity with an instrument this old.

The Gentlemen was by far my favorite out of the three. I dialed up some hammer and pedal noises, overtones and a nice concert hall reverb and lost myself in the beauty and delicate playability of the sound. This upright piano is capable of producing a variety of tones, from the dirtiest blues sound to the gentlest meditative music. The low end is warm and deep and the high end stays true to its' sharp but airy upright piano nature. The high notes are especially realistic with the hammer noise attached. I may be more partial to sampled uprights at the moment, since I also love The Giant, but I think you will gravitate towards this one as well. 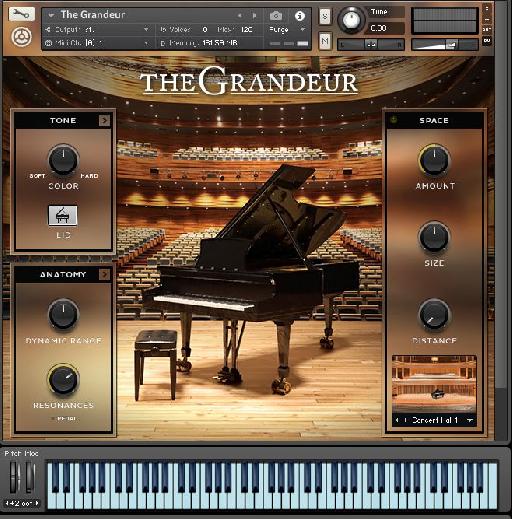 The Grandeur is replicated from a Hamburg Steinway D Concert grand piano. The Steinway D, measuring in at 9 ft, is one of the top choices for performing concert pianists and is found in important concert venues around the world. It's a special thing to have the sound of this piano at your fingertips. Pianos are all about the resonances and overtones created while playing and the sampling of the Grandeur is such a wonderful representation of these two important details. In general, the overtones and resonance additions are so reverberant by themselves, that the Space section is not necessary. The natural captured sound goes a long way. Each range is well balanced and rich. When I closed my eyes and played wearing headphones, I could imagine myself literally playing the grand piano. I can't say the same for other sampled pianos instruments I have played. And, it always stays in tune! 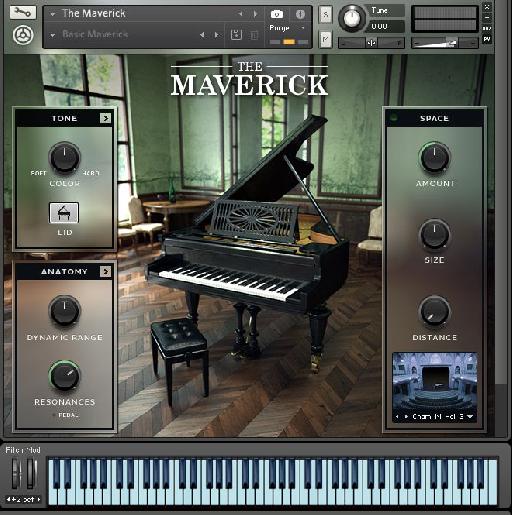 The Maverick is a Vintage Bechstein Grand Piano originally built for his Majesty Prince Friedrich Carl von Preussen in 1905, and then gifted to the Royal Princess of Great Britain. The Bechstein company had just celebrated their 50th anniversary a couple years before that, perfecting and finishing well over a 4500 pianos that year. So, this piano is a reflection of Bechstein's booming production period as well as their refinement of the craft at that time. Playing this piano is like opening a time capsule to the sound of a century ago, just like the other two pianos. But, I can hear more character in this smaller grand, than other vintage grands. The attack of each note has a sharper resonant twang in comparison to the Grandeur for example. The low end isn't as large or deep as the Gentlemen or Grandeur either but it is still strong and tight. This piano would be wonderful for jazz compositions as it cuts through the mix while still providing warmth.

The Tone Section, selected in the Maverick screenshot below, shows the parameters available for sound sculpting. The low keys enhancer is great, especially for the Maverick, if you need more low-end volume. There are equalizer knobs called bass, body and air to cover general boosting and cutting. Tonal depth and transient sliders and a built-in compressor round out this section. I suggest using these sparingly to avoid getting too far from the original sound. 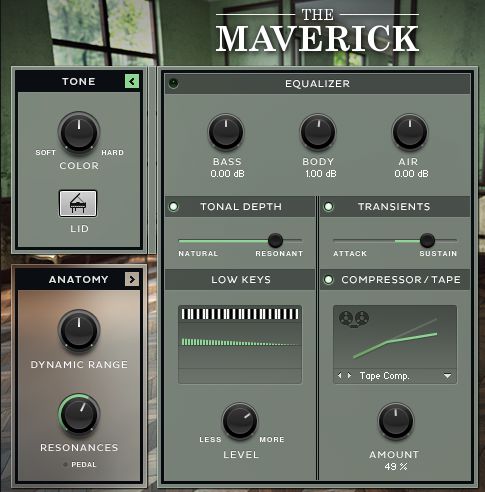 The Anatomy section is a fun place to play with the stereo field, add resonances and overtones, and a variety of noises including hammer, damper, pedal and string to the pianos' character. You can also increase or decrease the dynamic range of the instrument. I wouldn't recommend lowering the dynamic range too much though. The sound becomes overly compressed. Plus, the beauty of the instrument is the dynamic range possibility. As I mentioned before, I'm a big fan of the hammer and pedal noises for a more intimate and realistic sound. 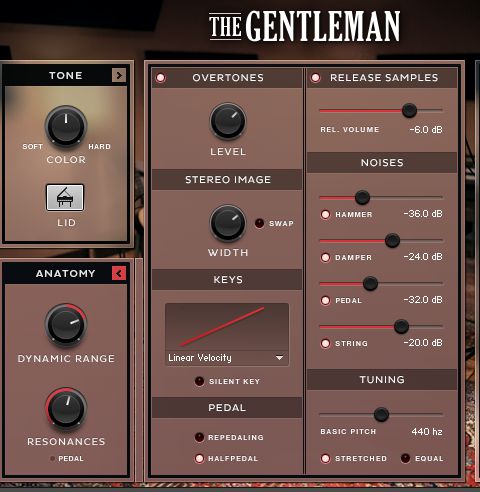 The Space section provides a variety of reverbs with basic amount, size and distance controls. If you are particular about your reverbs, you may want to skip this section especially when matching a reverb with other instruments in a session, but for solo or small piano-based productions, this is a handy feature to have built in. 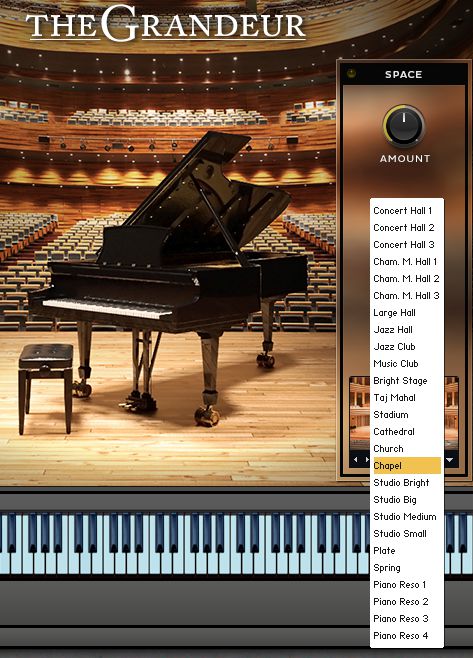 Figure 8'"Choosing a reverb in the Space section.

Each piano in The Definitive Piano Collection is RAM heavy. The RAM buffer increases as you add different tone, anatomy and space parameters. Each piano weighs in at 14 GB of data uncompressed. If you are looking for the most realistic acoustic pianos in Komplete 10 that rival any sampled piano out there, look no further than these 3 choices. But, don't forget the other piano instruments included in Komplete if you are looking to add piano to a production or demo but need more CPU power in your session rather than super detailed realism. These include the Vienna Grand, Berlin Concert Grand, New York Concert Grand and Upright Piano. These are still great sampled pianos although you will hear a distinct upgrade in quality with the new additions. And, don't forget Alicia's Keys and The Giant. All in all, if you need an acoustic piano of particular tone and color, you'll find the right one in Komplete 10, thanks to the addition of the Definitive Piano Collection.

Be sure to check out all the well-produced demo tracks featuring the three pianos on the NI website to hear them in more detail and in different contexts.