Language
When working with more than one MIDI device, like sequencers, keyboards and controllers, effects devices, etc., MIDI sync is hugely important. And that's where the Kenton THRU-25 comes into play.

Kenton, for me, has been a name synonymous with not only MIDI, but with reliable, spot on and perfect timing. It's a name that was most appreciated when I learned I was going to be tracking a band, known as Starbass, that was using multiple pattern sequencers, MIDI keyboards and MIDI based effects. After all, when you’re recording live MIDI, sync is where it’s at! In this review, I’d like to cover a very cool, simple and effective device for sending sync to a lot of MIDI gear—The Kenton Thru-25!

Okay, so when I got to Starbass’s crib, we had limited time and we needed to get all of their gear synced and ready to go. Thankfully, all I had to do was send sync from Ableton Live, on my laptop, to volca beats MIDI in. Other than enabling sync in the Ableton preferences, that was all I had to do. No configuration on the Kenton side, it was just plug and play.

This ease of use is incredible for a device that boasts only one MIDI in, and 25 MIDI thru ports. With the light, aluminum chassis, a tiny wall wart and a physical size that will fit in any backpack, there’s more going on under the hood that I should mention.

For one thing, the Kenton boasts less than one millisecond latency. After spending six hours, tracking with it, using non-stop MIDI, I can tell you, the latency is no errant boast. Timing was truly flawless! External devices synced unusually well with Ableton’s host clock. Arpeggiations synced with flawless timing, drum machines were synced with stunning accuracy and the MIDI-based effects moved in and out of the master mix, exactly the way they are supposed to.

Why You Want It!

When doing live MIDI, recorded MIDI, or even just a MIDI jam, sync is one of the main enemies standing in the way of keeping you from sounding tight. Unfortunately, setting up multiple devices to accept external clock sync can be a twisted affair. Not only is there setup for each individual MIDI device, within their own global utilities, but there’s also the added frustration of learning how to operate a MIDI patch bay, or try to piggy back everything through existing gear, without any kind of MIDI hub. 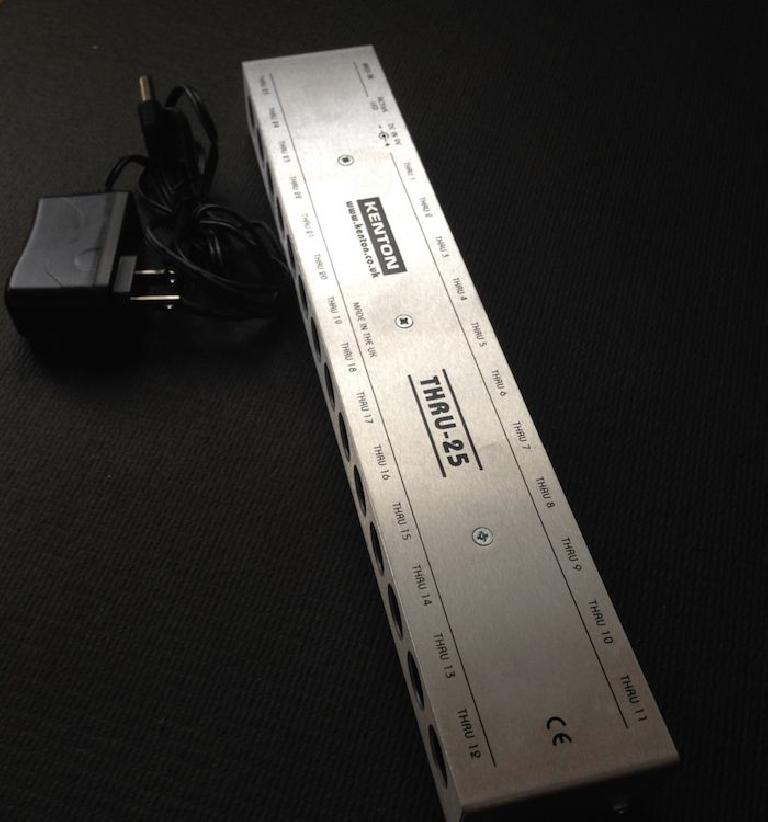 The great thing about the Kenton Thru-25 is that there is no setup! As long as your devices are set to receive, you’ll get a perfect copy of the MIDI signal coming straight from either your laptop, or host sequencer of choice. SysEx is copied, MTC is copied, and all other MIDI messages.

Granted, if you’re someone that wants a traditional patch bay, where ports can be assigned directly to certain pieces of gear for not only sync, but also direct control, this may not be the device for you, as you will be sending the same information to up to 25 devices. But from your host sequencer or DAW, it’s still possible to map to specific MIDI channels.

However, if you’re someone like me that just wants multiple copies of the same clock transmission, you’re going to love this device. One MIDI cable in, 25 MIDI thru/outs. What’s not to like! 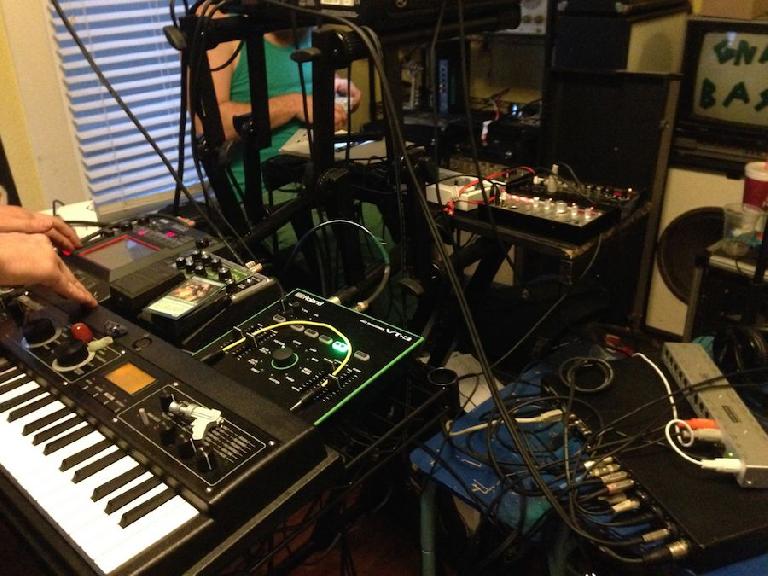 The Kenton Thru-25 completely delivers with a polished, rugged exterior, and an interior that really knows what it’s doing. It’s compact enough to wedge its way into any studio, or live situation. And, because there’s no setup at all, you can spend all that time that you would’ve been trying to figure out ‘what’s wrong with the sync’ actually recording cool riffs, and laying off customer support! Not bad, Kenton! And, did I mention that it’s so light that I thought Kenton sent me an empty box, until I opened it? This is a MIDI producers best friend!

Pros: Small, sleek, affordable MIDI Thru box that can copy a MIDI signal up to 25 times.

Cons: No rackmounts, no way to modify the internal routing.