Language
K-Mix from Keith McMillen Instruments is a high-quality audio interface, programmable mixer, and MIDI controller combining their best tech know-how in one portable package. Timo Preece gets hands on.

What if someone was to build a quality audio interface, stand alone mixer with built-in DSP, and a MIDI controller all in one small, rugged package? Keith McMillen and crew realized the need for this very special device that did not exist — a fully programmable, MIDI-controlled, ultra high-quality portable mixer for studio and stage. I’ve had this little unit on my desk now for a couple weeks and I must admit, it has a lot to offer…

Check out AskAudio’s initial announcement for a quick look and tech specs here.

My initial reaction when hearing about the K-Mix was slightly underwhelming as I reflected on reasons behind abandoning mixers in my personal setup altogether. They take up space, aren’t very portable with the amount of gear I need to carry while touring, and have been something I’ve replaced with ‘in the box’ digital routing.

With that being said, I acknowledge the limitations of my setup… I have little to no tactile control on the interface itself. Without a separate MIDI (or OSC) controller assigned to the mix software, I’m forced to use a mouse to make adjustments, which only allows me to navigate one parameter at a time. Although my interface can be used standalone, there is only one knob on the unit to control all associated parameters. 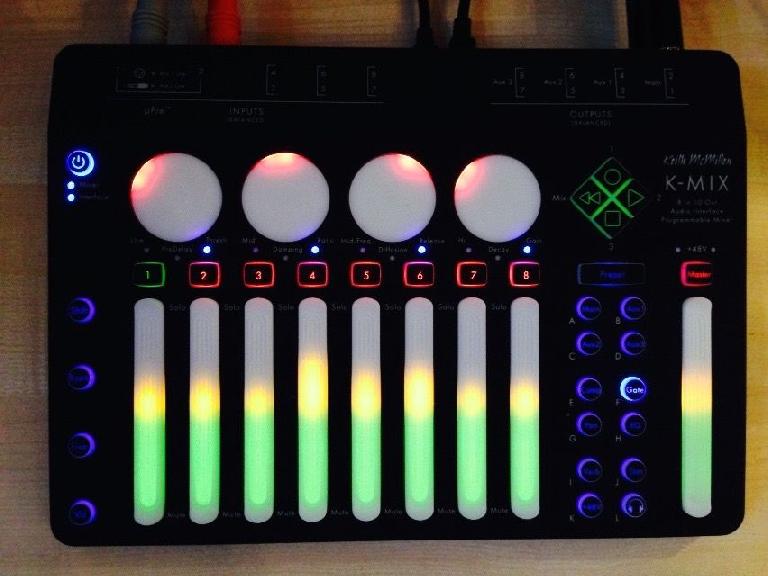 Admittedly, such limitations are not optimal for mixing. After spending time with the K-Mix, appreciating renewed hands-on control, something clicked… there’s a discernible distinction between ‘mixing’ and ‘routing’.

In my humble option, one of the greatest advantages of the K-Mix is the amount of quality and functionality you get for its size. It’s no bigger or any heavier than a standard portable audio interface. It’s built rugged with absolutely no moving parts, which means I can toss it in a backpack and hit the road with little worry about it getting damaged. (By the way, did I mention that the only knob on my audio interface is somewhat broken and mostly unusable after much tweaking and many a travel?)

K-Mix faders have been remodeled from the ground up. Unlike the KMI QuNeo for example, I haven’t experienced the same jumpiness that occurs while making parameter changes. Instead, the controls are responsive and smooth to the touch. For added control, there’s a Fine Tuning mode that allows you to “zoom in” on a fader or rotary control, providing a much higher degree of resolution than under “normal” operation.

As advertised, K-Mix is a pro-quality USB audio interface with 2 ultra-low-noise, transparent µPre™ preamps for quality recording. Supporting sampling rates up to 96 kHz and 24-bit AKM Converters, you get 8 balanced inputs and 10 outputs (8 balanced). 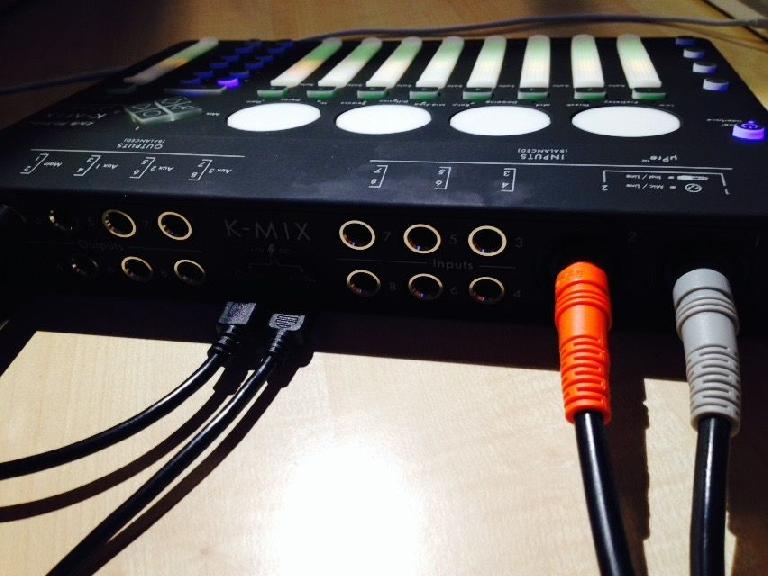 Each of the 8 input channels has an optional high-pass filter at the beginning of the DSP chain. This is intended to be used as a “rumble filter”, removing microphone handling noise or the “thump” that may occur when bumping a turntable. 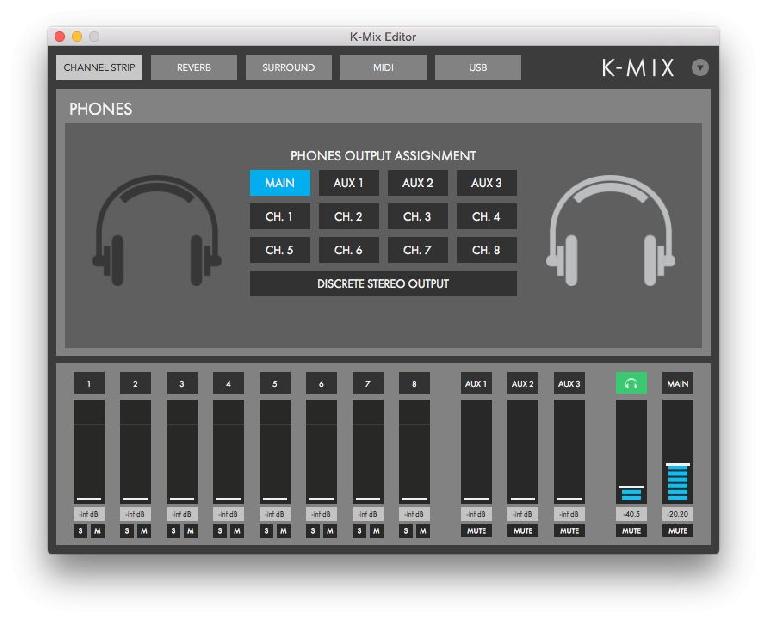 Another happening feature is K-Mix’s ability to leverage multiple outputs and rotary controls to spatialize audio in multiple surround sound formats. The software editor allows a user to switch between Quadrophonic, Octophonic, 5.1 and 7.1 configurations. Moreover, K-Mix utilizes Ambisonic panning algorithms to ensure a high-quality soundstage when working in a surround sound environment. 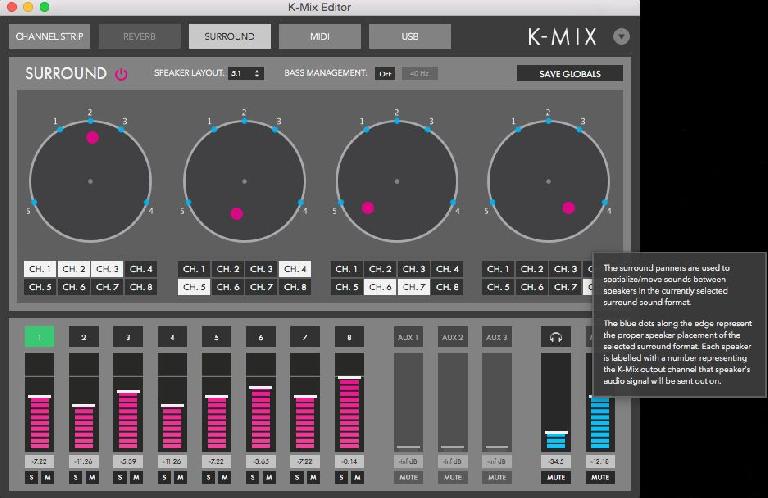 The K-Mix comes equipped with its own set of DSP effects. This is a welcome addition for those wanting to use K-Mix as a standalone mixer or those needing to save valuable computer resources.

The Master output and each of the 8 channels get their own dynamic processing chain, which consists of a 3-band semi-parametric equalizer, compressor and noise gate. K-Mix also offers a global reverb effect send. Each of the 8 input channels can route to the reverb at different levels using the available reverb sends. Reverb sends can be set pre-fader or post-fader and all reverb parameters can be controlled via the mixer hardware or the software editor.

Note: Unlike the main output bus, the auxiliary outputs do not have any DSP effects and the reverb send effect is not mixed into the aux outputs. 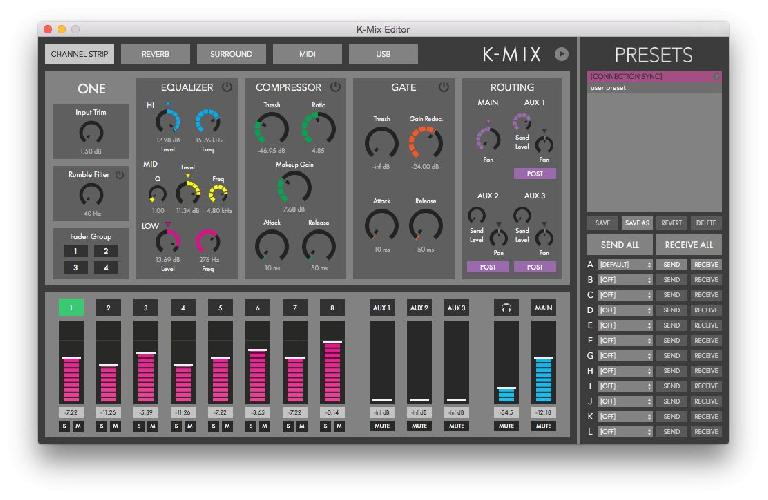 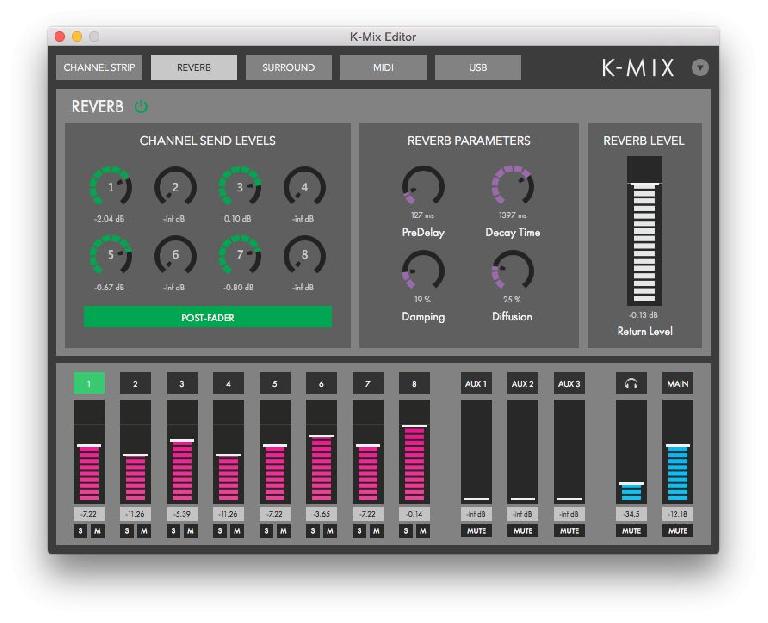 In addition to functioning as both a mixer and audio interface, K-Mix speaks MIDI.

K-Mix allows for bidirectional MIDI communication with USB host devices (computer, tablet), and with external MIDI hardware (via the optional KMI MIDI Expander). K-Mix is fully capable of both outputting MIDI to control other devices/software, and receiving MIDI for control of its own parameters. Each sensor can be set to output a different MIDI message for each of the three available MIDI banks. 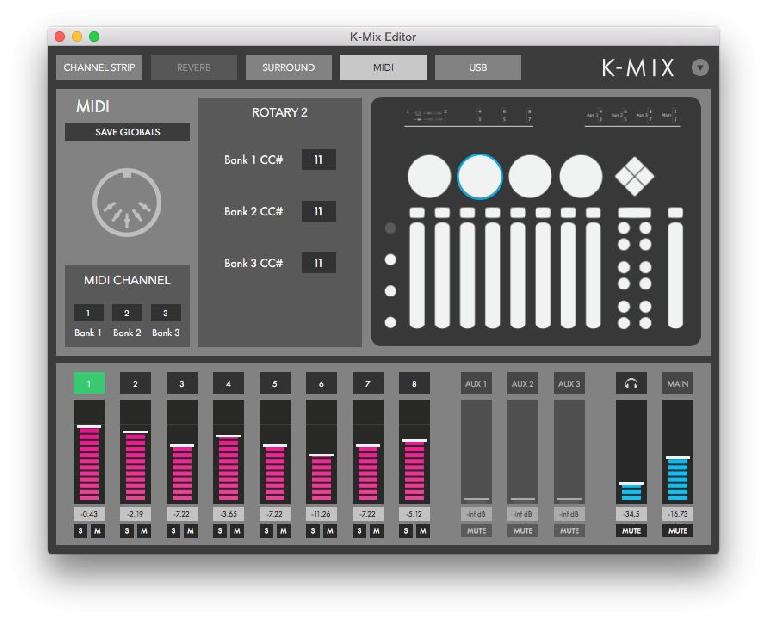 At the time of writing this article, sending MIDI information via USB connection to my computer worked nicely and I was able to MIDI map values from the K-Mix to my DAW. However, as indicated in the manual, several features are still under development. One of which is control surface mapping to applications such as Ableton Live. After speaking with KMI’s technical support, they’ve assured me it’s in the works and for the mean time there’s a user script workaround.

“Using the UserConfiguration.txt file can quickly provide a way to play with devices and control the faders in Ableton Live right from our K-Mix with zero MIDI mapping. This lacks some of the more advanced features of a full blown Remote Script. Users won’t have LED feedback, and won’t have the ability to access different banks or pages on one preset, but will still be able to get some decent integration.”

Link to more details, instructions and the UserConfiguration.txt file here.

With the popularity of outboard gear continuing its resurgence, connecting and managing external sources necessitates a special set of needs. If you’re looking for a quality, portable, rugged audio interface, mixer, controller at a respectable price, this is a great choice.