Language
What do you look for when choosing a virtual piano instrument? Well sampled and rich sounds? Efficient CPU performance? Matt Vanacoro finds out if the Kawai-EX Pro meets the grade in this review.

In a veritable sea of options for virtual piano instruments it can be difficult for any single one of them to be heard above the din. I don't often get excited about a new piano Virtual Instrument (VI) as the differences between them can be very slight. Thankfully, Kawai-EX Pro from Acousticsamples has done a wonderful job of setting a new standard in piano sampling. There's a lot to love about Kawai-EX Pro—let's take a look.

I typically take a look at the features, user interface and look of a product before I dive into the sounds it produces. For Kawai-EX Pro, however, the sound of this piano takes center stage. It's meticulously sampled, and the algorithm they are using to transition between layers helps to really link the sound of this instrument to its feel. It's the first piano VI in a long time that I've actually gotten lost in using and found myself playing on my keyboard controller for the pure joy of it. I found that I wasn't distracted by overly obvious velocity layer transitions—this instrument just plays like the real piano it was sampled on (a 9 foot Kawai-EX grand piano that once lived in the Kennedy Center in Washington DC).

Choice of piano is an incredibly subjective topic, and it can vary from song to song. A piano that sounds nice on on a solo track may not necessarily cut through a rock mix, and a piano that you are using on a rock mix may sound too trebly and aggressive on its own. That being said, Kawai-EX Pro is my new piano of choice for any track where the piano is the focus of the song. Jazz songs, classically influenced tracks and pop songs all came to life with this instrument.

Kawai-EX Pro clocks in at around 12 GB on your hard drive. This is a fairly economical size for an instrument of this quality. There are 4932 samples spread out amongst 3 microphone positions which are user-selectable. Sustain samples received some special love with 5 velocity layers for the sustain on both pedal up and pedal down. The usual suspects of resonance, sustain pedal noises and key noises are all here and work seamlessly.

In practice, Kawai-EX Pro was wonderfully efficient. It only used up about 200 MB or so of RAM and ate up about 10% CPU power at a buffer size of 128 on my older MacBook Pro. This translates into a wonderfully responsive feel with no lag or CPU spiking issues. Kawai-EX Pro can be hosted inside of MOTU's wonderful MachFive 3 sampler or the powerful (and free!) UVI Workstation 2. 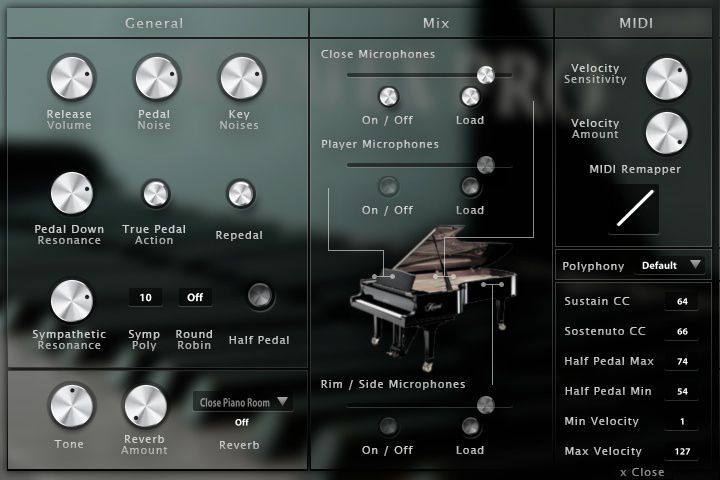 The user interface is well designed and easy to adjust on the fly.

The user interface is pleasant and easy to adjust on the fly. Accessing mic positions, resonance, and tone adjustments was very clear and concise. The aesthetic of the UI lends nicely to the classy feel of this instrument with just the right amount of piano-like graphical elements. I was able to make adjustments to the velocity curve, mic positions and polyphony quickly and easily.

If you perform or record music where the piano is 'front and center' this product is a no-brainer. It's more efficient than most and sounds fantastic. It truly shines on classical and jazz inspired tracks, but any production where you want the piano to have the focus will be improved by using Kawai-EX Pro.