Language
Sometimes 'simple' is overrated. Especially in the world of granular synths, it can be more satisfying to spend time getting to know a synth in-depth as Noah Pred discovers with Madrona Labs' Kaivo. 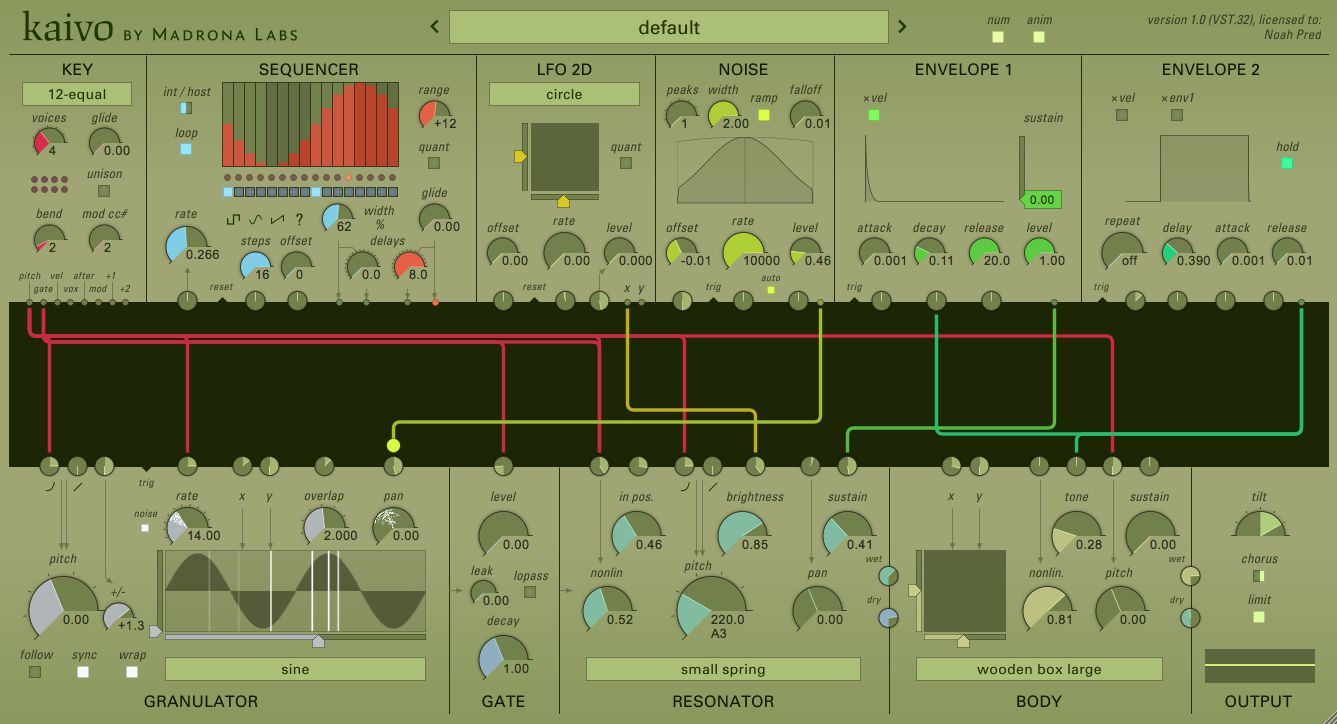 Physical modelling is nothing new: utilizing complex mathematical formulas to mimic the natural vibrations of strings or reeds and the acoustic properties of various resonating structures, I first remember it coming to market in the late 1990s with Korg's much-hyped Prophecy monosynth. Since then, computing power has developed exponentially, allowing for ever more realistic acoustic models. The foundation for Live's Electric, Tension and Collision devices (as developed by Applied Acoustics), physical modelling technology has found its way into plenty of music production—yet never quite caught on as a “go to” sound like the simple subtractive synthesis of a Moog or a 303.

Granular synthesis is a sample-based technology—prevalent in time-stretching algorithms—that spreads a sample over time by slicing it into individual millisecond or even nano-second components that are then spread out over time and re-ordered as needed. There's plenty of dedicated granular synths out there—for example, Robert Henke's Granulator device for Max for Live or any number of Reaktor patches.

Kaivo, however, breaks new ground by combining these two technologies in a modular platform geared to deliver sounds that would be hard to imagine finding anywhere else.

The Granulator section is conceived as an exciter—correlating to the finger of a guitarist or the hammer that hits a piano's strings. That said, it can be routed independently, with a wide range of sounds achievable simply by editing the Rate, Overlap, and Range controls—which can all be modulated by any source via the Patcher. The default Granulator is a pure sine wave, but the option to import your own Granulator waveforms will be available soon.

The Resonator corresponds to a vibrating model, which you can choose from Metal String, Nylon String, Gut String, Small, Medium or Large Chime, and Small or Large Spring. These determine the type of object being struck or plucked by the granulator, with separate Wet and Dry controls to balance the output into the Body.

Finally, the Body determines the type of resonating structure that will amplify the Resonator. Here we can choose from a Large or Small Wooden Box, Metal Plate, or Frame Drum. Just by tweaking a few controls—Non-Linearity, Tone or Dimensions—the results can shift from tame to extreme. Again, all of these can be modulated from any source within Kaivo. We also have separate Wet and Dry controls to balance the impact of the Body on our final sound.

Factor in the powerful sequencer lifted from Aalto, a uniquely spatialized “2D” LFO with a range of unusual shapes (Circle, Infinity, Gaussian, and Knights, to name a few), a looping Envelope as a second possible LFO in addition to the default ADSR Envelope, selectable incoming key scales, plus a great sounding Chorus and Tilt control and we've got the potential for dramatically singular sounds on our hands. All this takes place withing a resizable vector-based GUI utilizing Madrona's incredibly flexible and intuitive Patcher modulation routing system, which allows any modulation source to be routed to any parameter that can receive input with just one click. It may not be the easiest instrument for the novice user to wrap their head around, but time spent learning its unique ways is sure to pay dividends.