Review: Joey Sturgis Tones Finality: One Limiter to Rule Them All?

Language
When it comes to mixing plug-ins, Joey Sturgis Tones is becoming a popular maker. So, we were curious to see how his new limiter, Finality, performs. Is this the final word for mastering audio?

A good limiter plug-in, with the kind of character, warmth, and control that a hardware piece has is hard to come by, in my opinion. Sure, there are many devices out there that claim hard limiting. However, to my ears, they usually still sounded a little soft. Recently, I got a chance to spend some time with an amazing new limiter by the engineering/production machine, known as Joey Sturgis. How much effect does having someone like Joey get involved in the creation and design of a limiter? A lot!

For me, this is kind of the limiter I’ve been waiting for! For one thing, it has the sound that I really enjoyed with many of the hardware limiters I’ve worked with over the years. But it’s also got an incredible versatility in use, while still being light on the processor. In fact, it’s so light, that before I knew it, I had Finality iterations all over my Ableton session.

For drums and vocals, I quickly began finding myself unequivocally hooked, within the first hour of mixing. For crazy snares and double-kick, I found Finality to be amazing for keeping things under control. I really liked the coloration and attitude that the Aggro and Color settings would add in to the sound that I was trying to bring out in the drums sounds, and synthesizers.

Aggro alters the release envelope to be more favorable to drums. I also found that it did some really interesting stuff to aggro, plucky 303-ish synths. Combined with Color, I got some nice, subtle edginess that would easily get me by, when I didn’t feel like spending the processing power on Amp, or Trash 2, from iZotope.

Finality does have a hard and soft mode, so if you’re not really looking for the hard-ass industrial sounding drums I’m doing, you can also switch over into soft mode for definite crispness, just a little less attitude. When you want the best of both worlds, YES!, there is a Mix knob, for parallel processing. This part got me the most excited, as you can really brickwall with Finality, and then you can pull back the mix, and bring in a little of the original. This last part sealed the deal for me.

Tricks in the Bag

Finality does have Side-Chaining, but it’s only for the internal High-Pass Filter. By enabling the Sidechain HPF switch, you can dial in the HPF cutoff frequency to focus Finality on more specific, low-end frequencies to be limited, so that other High Pass frequencies can be kept alive, to flourish, within your mix. This is especially cool when working with sample loops that may have some hard kick that you want pulled back, so that you can bring out the hats, and other percussion, in the background. 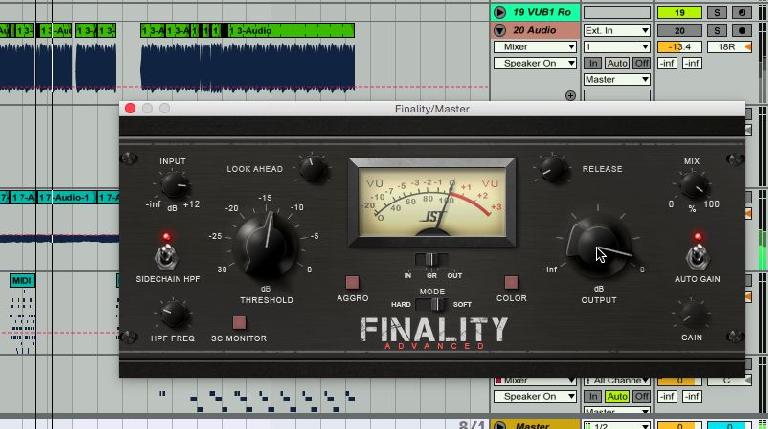 There are also various, hidden commands in the GUI that allow for more careful fine-tuning. You can Shift-click and drag on the large release, and threshold knobs to slow down knob movement, and even double-click on knobs to type in specific numbers.

Finality is a great buy for the price it’s going for, especially for the advanced version (the one that I checked out, primarily). If you get Advanced, you also get the Lite version, too. This version doesn’t have some of the cool features like the Sidechain and Auto release, but it does have the Mix knob and is equally super-lite on the processor, while sounding great. Lite is a great one to throw in quick on basic drums, loops, and so on, when you’re already blowing 80% into your processor.

Pros: An amazing sounding plug-in Limiter, with a lot of hardware characteristics in terms of sound. Great for parallel processing.