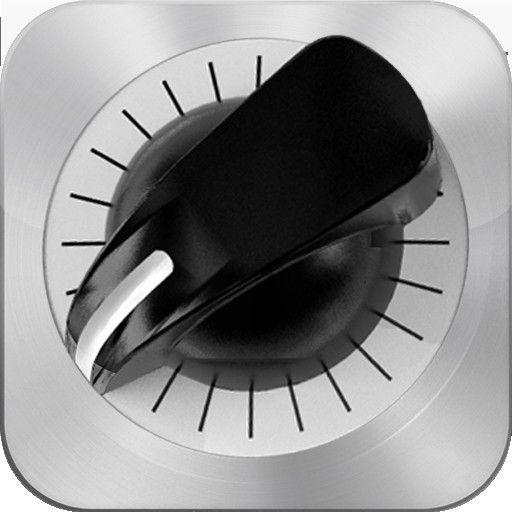 Language
Mike Watkinson lets his hair out & gets ready to shred using JamUp Pro for iOS. Before he does, he's kindly written an excellent review of this guitar amp and effects simulator! Read on.

JamUp from Positive Grid is a guitar amp and effects simulator app for iOS devices that also provides a range of features for jamming and practicing. It comes in two versions, JamUp Pro (at $19.99/£13.99) and JamUp Lite which is free. The Pro version, on test here, comes with six virtual amp types resembling Fender's Blackface Twin and Bassman, the Vox AC30, Marshall Plexi and JCM 800 and the Mesa Boogie Dual Rectifier, rendered using Positive Grid's MESH modelling technology. 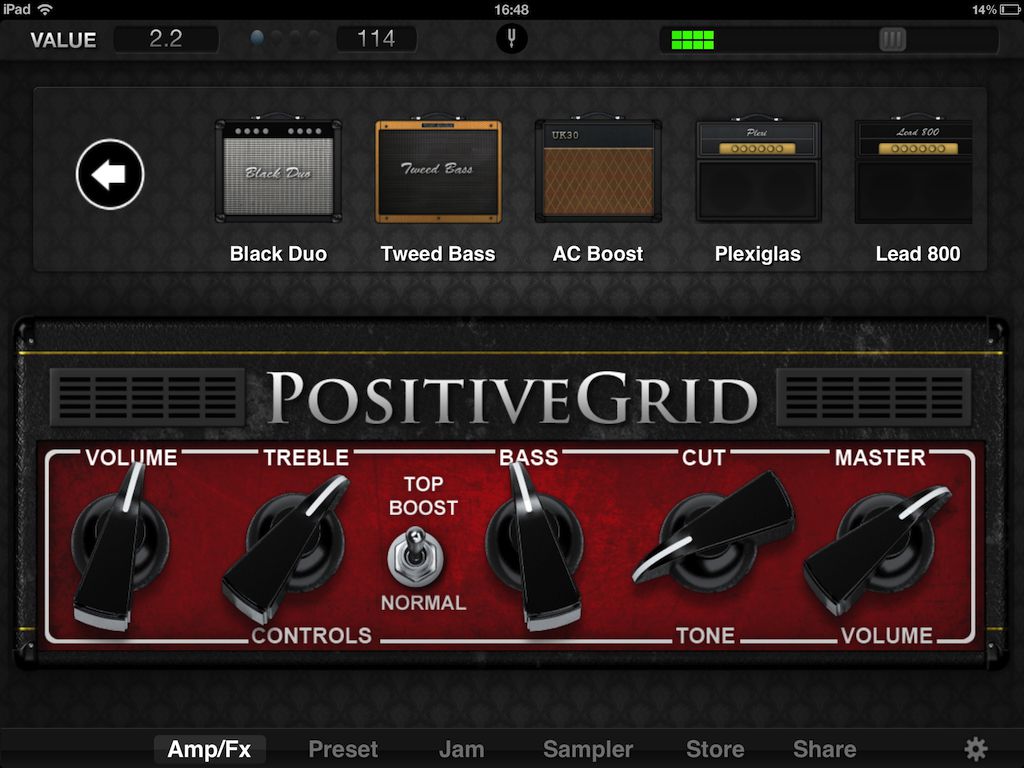 One of six amps available in the Pro version.

The Lite version just offers the AC30. The Pro version gives you twelve effects modelled on well-known stomp boxes and classic rack-based effects such as the Boss OD-2 and MXR Dyna-Comp, where the Lite version has only two effects to choose from. 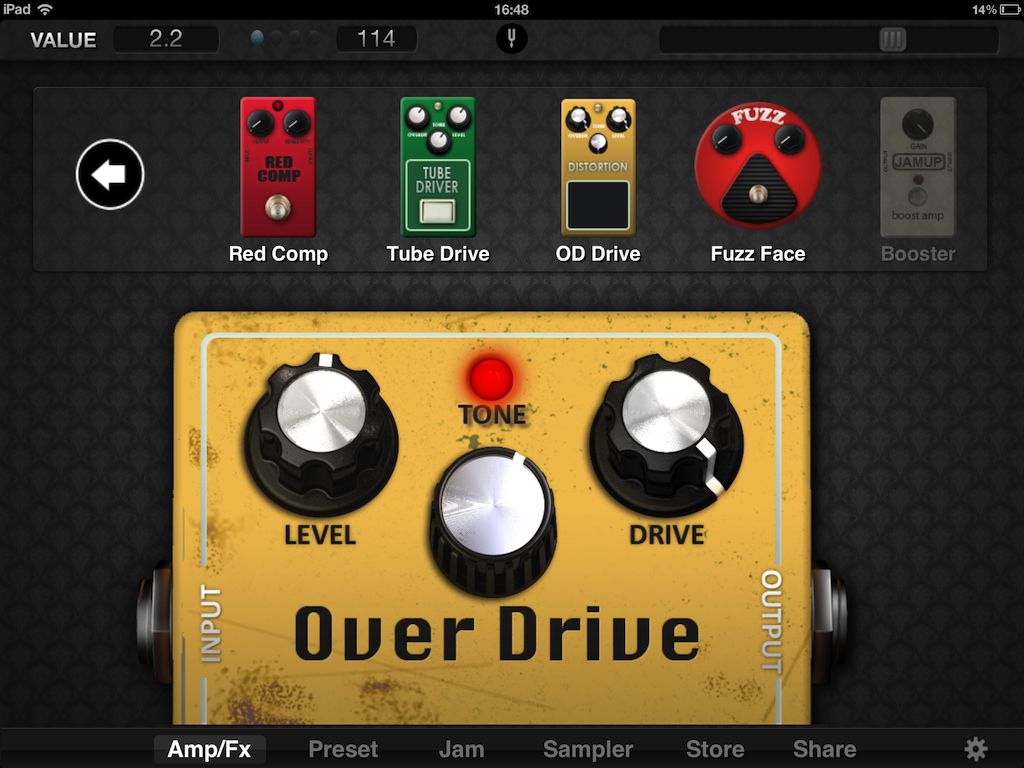 You can combine one amp up to six effects to create your sound. Adding an effect into the signal chain is achieved by dragging it down or up to remove it, and the order of effects and amps can be changed by dragging each one left or right. I have to say I found the method of choosing an amp or effect slightly non-intuitive. My first instinct was to swipe horizontally on an amp (or effect) expecting a 'Cover Flow' style way of browsing alternatives; in fact you double-tap a device in the routing part of the screen to see a list of similar devices, then tap on an arrow to return to the main screen, which felt strangely non-iOS. I was also a little frustrated to be constantly offered choices I didn't own – admittedly they were greyed out, but then so is an effect you are not using or an amp that is switched off, so this all became quite confusing. Also, the effects have been grouped into type so it is only possible to find a certain effect in that effect group which could slow down the creative process.

Each amp choice comes with a number of presets including effects settings and you have the opportunity to store up to sixty four presets in total. Griffin's StompBox (to be reviewed soon on MPV) will work as a foot controller for selecting these presets. 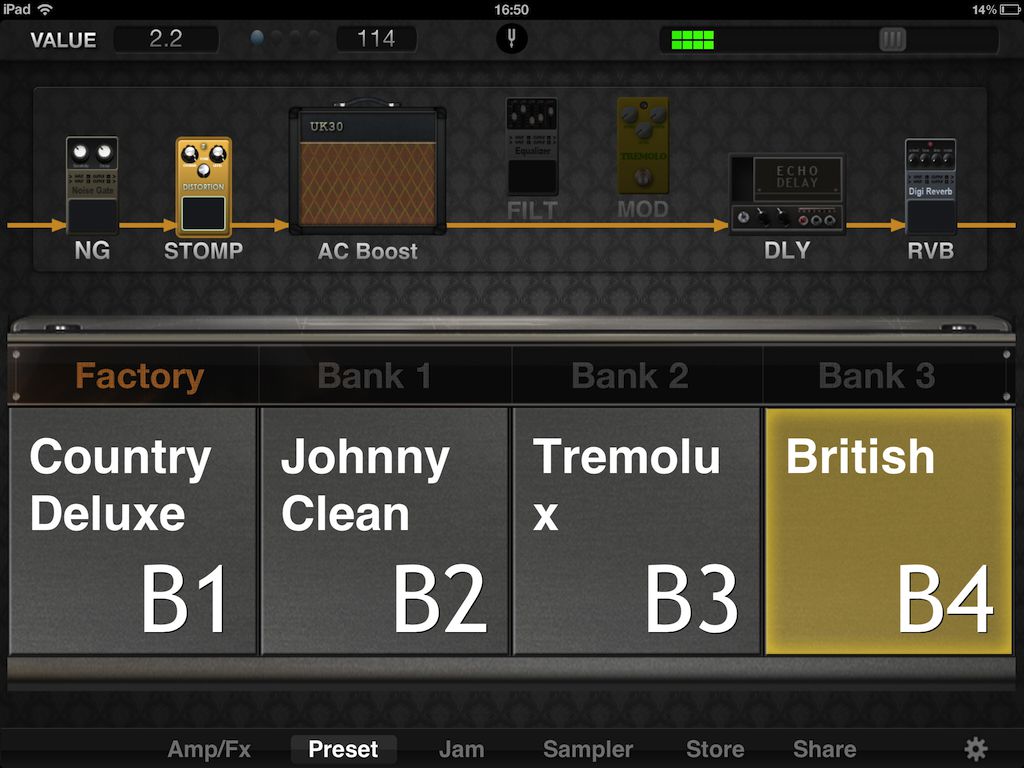 The good news is that these amps and effects sound great. There is now a wide range of input devices which work with JamUp; I used my trusty Strat through an Apogee Jam interface and can report that these are among the most realistic amp and effect simulations I've yet to hear from an iOS device. Once I'd engaged ultra low latency mode in the settings, I found the touch and response of the amps reassuringly authentic.

On top of what comes with the Pro version, a further eighteen amps including some tasty looking boutique style models are available as in-app purchases, either singly or in (much better value) bundles. Seventeen more effects are also available. 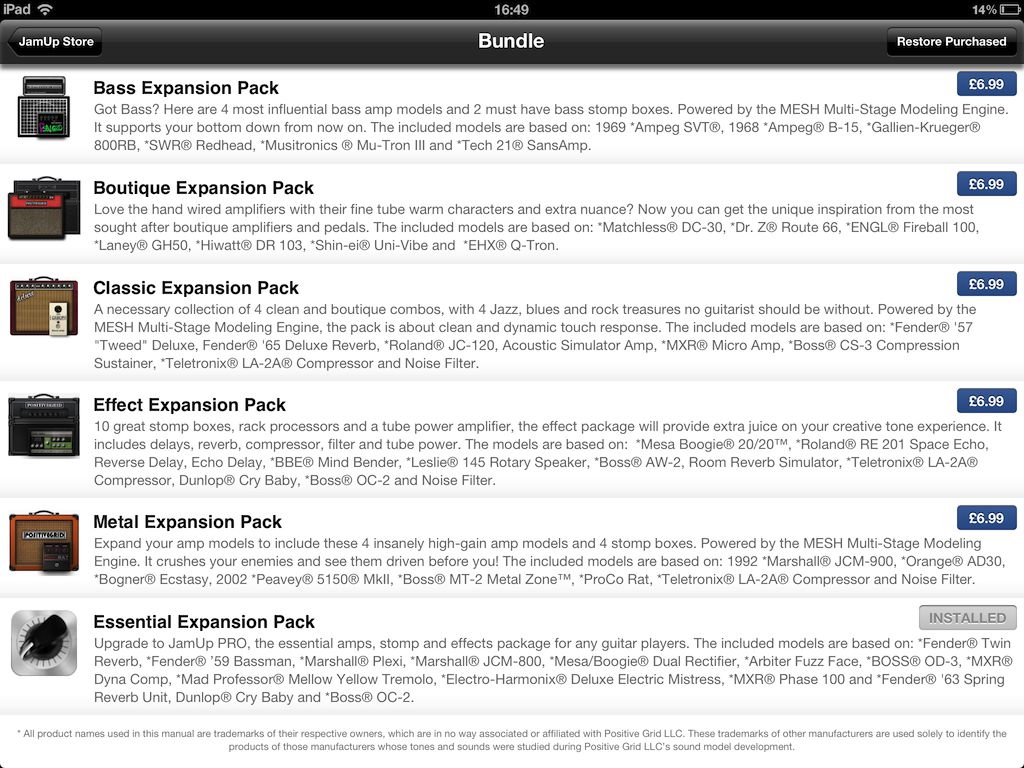 The Jam window allows you to play along to any song in your iTunes library with easy to use speed and pitch controls, along with the ability to set loop points making JamUp an effective phrase-training tool. Alternatively, this new version of the app will play in the background, so you can hop over to your phrase-training app of choice if you prefer. 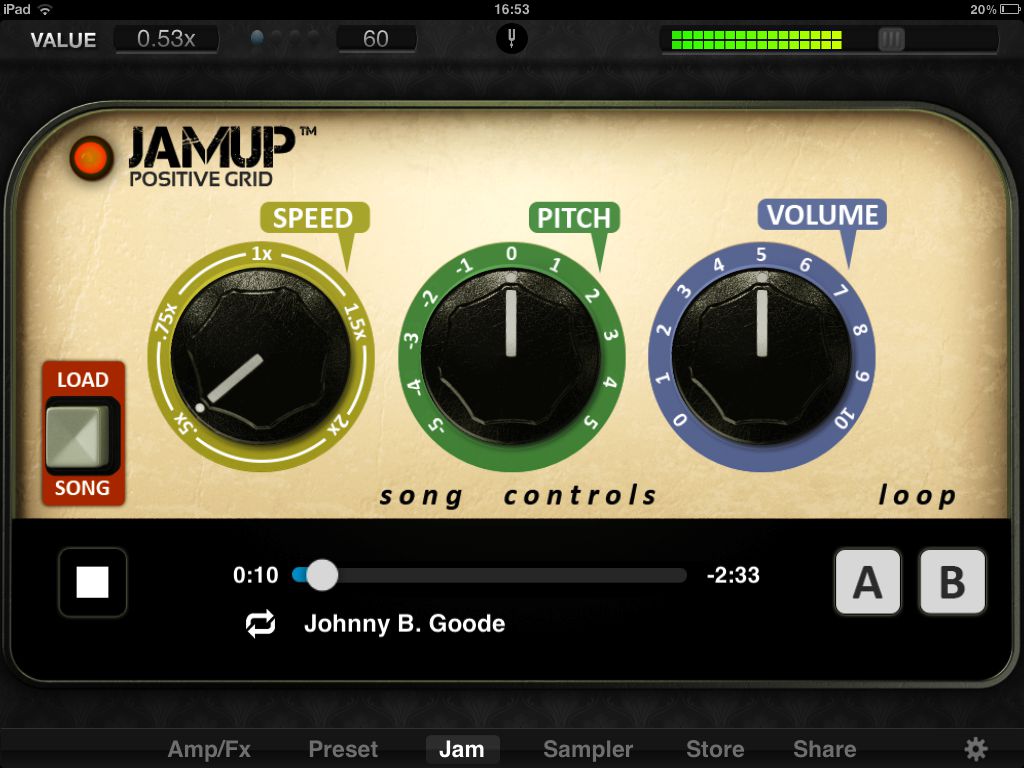 Jam with that, sir?

The Sampler window is a simple but effective 'looper' that lets you lay down chord patterns, overdub parts and create simple backings. 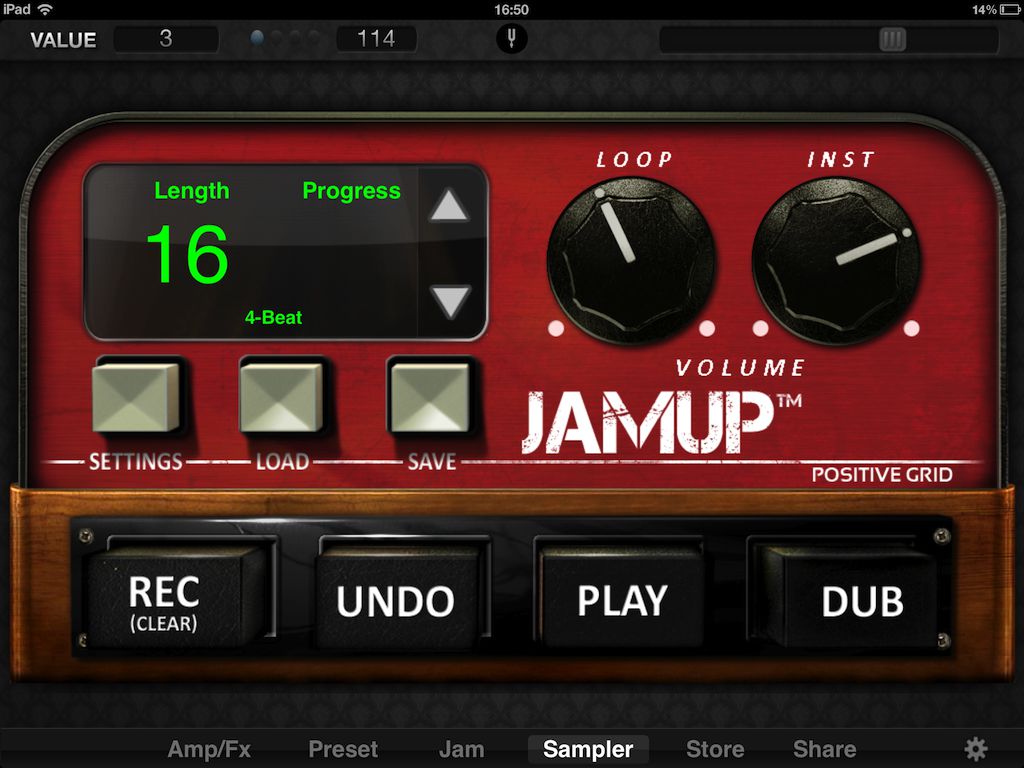 A new feature in version 2.0 is the ability to share presets. Users of both the Lite and Pro versions can upload their own presets, and download presets from other users - again the only proviso being that you own the same 'extras' as the person who created the preset! The cynical might see this as one way for Positive Grid to tempt you into buying more amps and effects, but  creating a community is also one way to guarantee the popularity of the app and its continued support and development. 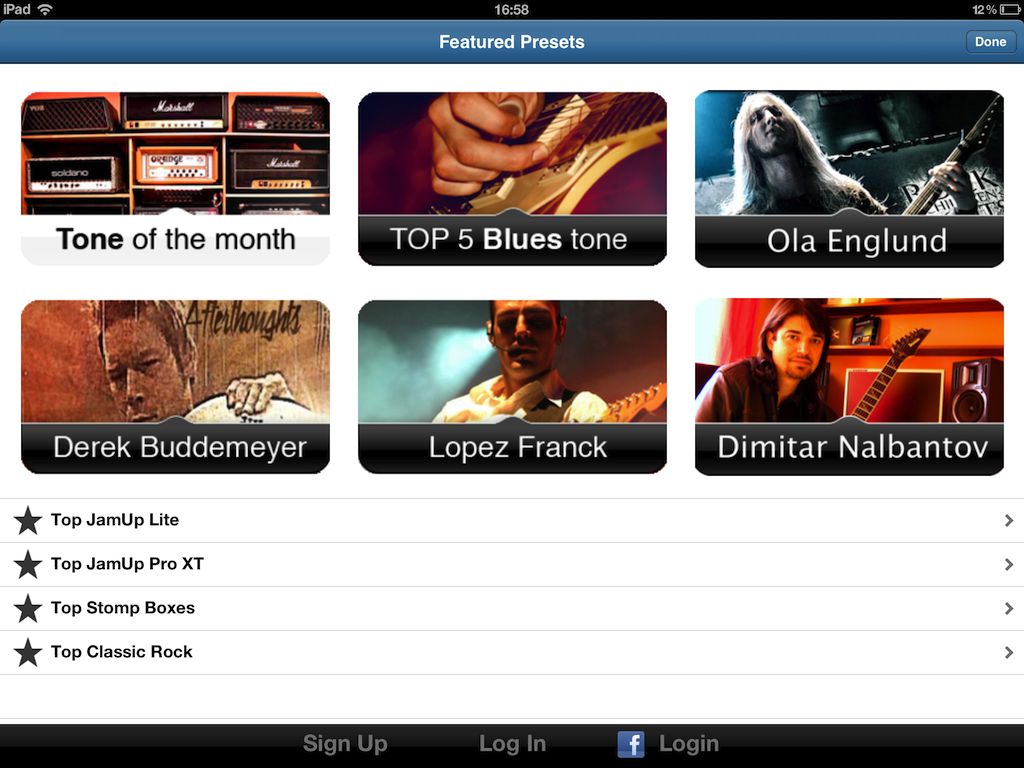 Sharing presets with other users.

Overall, then this is one great sounding amp sim, with enough features and options on the standard pro version to keep most guitarists happy. Just watch you don't blow the budget downloading the extras!