Language
There's not many products that make Toby Pitman swear out loud in sheer amazement when he first uses them, but Jam Origin's MIDI Guitar software is definitely one of them!

The concept behind MIDI Guitar is so simple and brilliant that I thought it was a hoax at first. Just plug your guitar in your audio interface with a 1/4” jack, launch MIDI Guitar and that's it! You now have a MIDI guitar! No special pickups. No 13 pin sockets. No pitch to MIDI converter hardware! Just a lead!!

So I downloaded a demo. I plugged in the guitar to my Apollo and launched the software and then loaded a synth in Logic. I then started to play. Did it work? Hell yes it worked!!

Now I've owned a few MIDI guitar setups and never been all that satisfied with them. They're a pain! This however was a total breeze and some of the best tracking I've ever come across. Also there was pretty much zero latency! Plus, it even tracks chords perfectly.

Within two minutes I was on the Jam Origin site making a purchase. I was that impressed!

I guess this software has been made possible by the leaps in pitch detection algorithms over the last few years. By this I mean 'polyphonic' pitch detection.

Auto-Tune and other pitch correction software have used real-time monophonic pitch detection for ages. Real-time polyphonic detection is relatively new though. The only thing I can think of that uses this is Zynaptiq's PITCHMAP.

Anyway, the software is pretty simple and acts like a bridge between the guitar and the MIDI ins of your DAW. Just set your inputs up for your interface and tweak the sensitivity parameters. Below you can see the 'Essentials' page in the software that is a simplified layout. 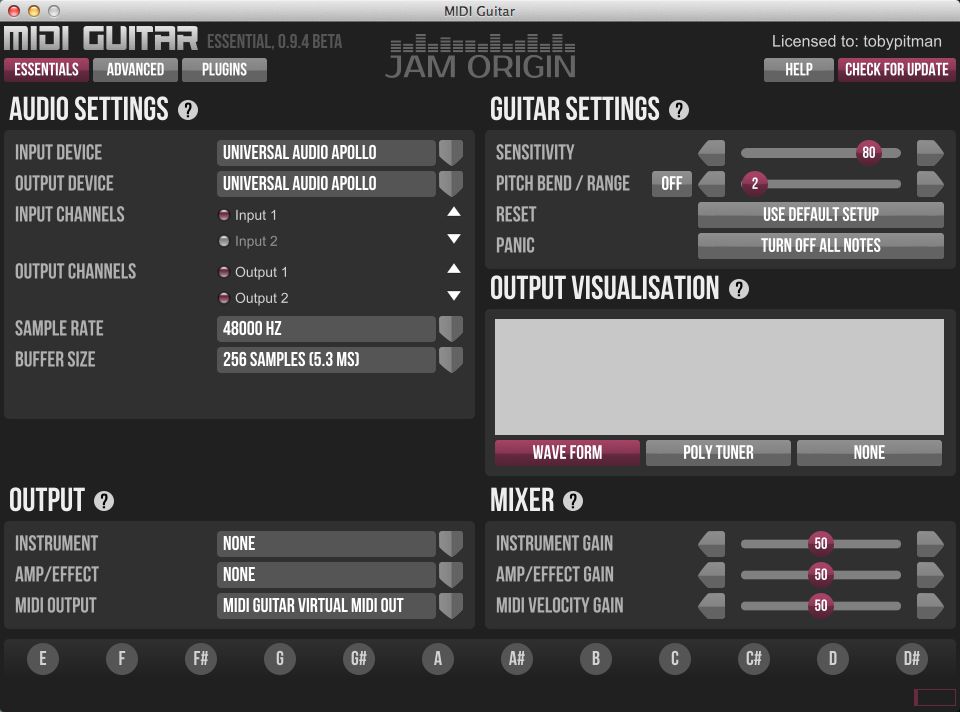 In the 'Advanced' page there are more parameters and tweaking you can do to refine the detection profile. I have to say I was pleased that I didn't have to modify my playing style too much (unlike most MIDI guitar hardware) as it picked up a wide range of dynamics and didn't seem too phased by a little vibrato. You can see the detection amount in the waveform display. 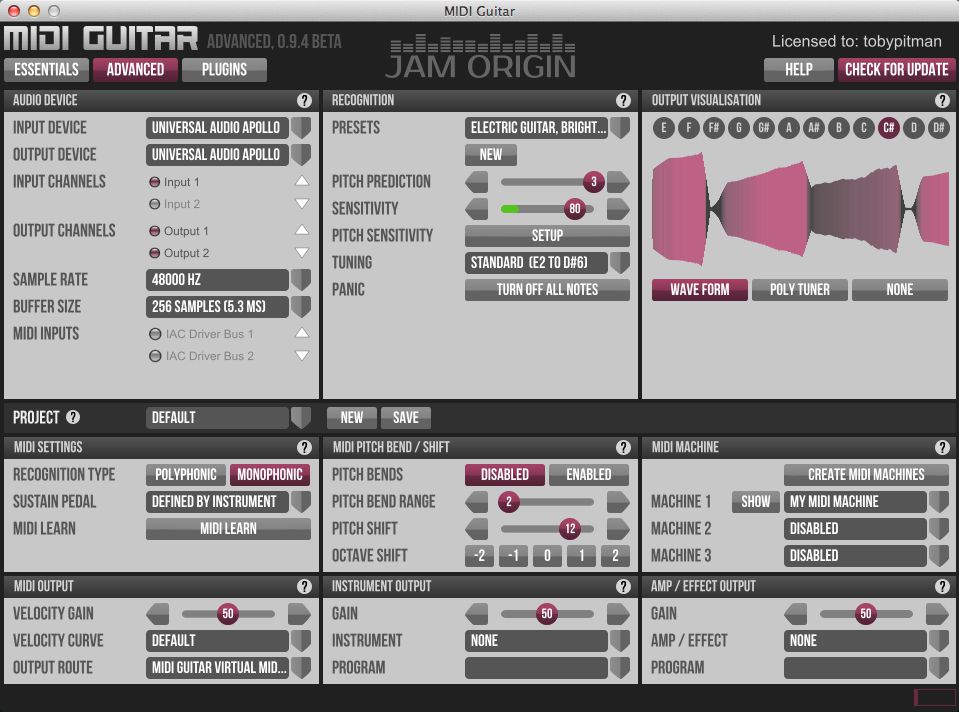 The outputted MIDI can trigger some basic in-built sounds or be ported to any MIDI destination in your system. The default is a port called 'MIDI Guitar Virtual Output' which should show up in your DAW. 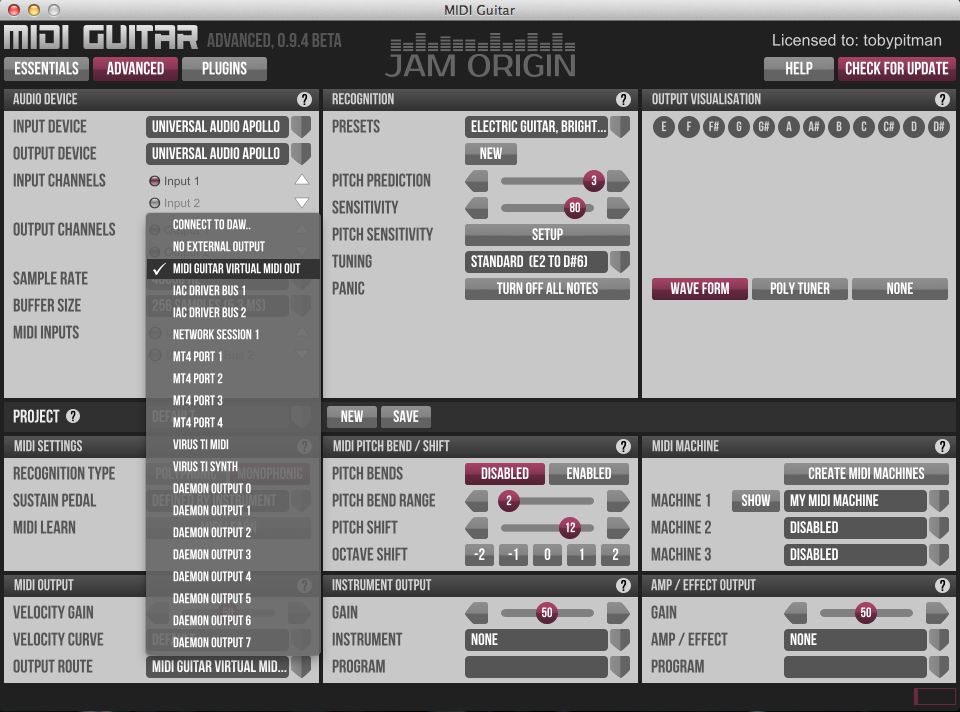 There's also options for allowing pitch bend information to be triggered when you bend a string. You can also use the software as a standalone unit by loading Audio Unit synths and effects in one place. Just scan your plugins folder and you'll be able to select them in the software.

All of a sudden your guitar isn't just a guitar anymore! It can be anything! You'll quickly start to come up with loads of fun sounds by layering synth with your guitar signal.

Here's a monophonic melody over a drone. Guitar, Guzheng and a synth lead.

Polyphonic material works equally as well. Strum some chords and layer a nice pad sound and it's like having a whole effects rack on the go!

I have to say I didn't run into many problems at all with tracking polyphonic chords. All you need to bear in mind is when you release notes.

So are there any drawbacks? Well the only thing MIDI Guitar can't do is determine which strings are playing what notes as the signal from your guitar can't be split for each string. This means you can't play different sounds per string.

MIDI Guitar does have one major trick up its sleeve though in the form of the MIDI Machines function that allows you to script MIDI plugins. With this you could set up some pitch ranges to transmit on different MIDI channels which is a cool trade off!

You can demo the software which is actually still in Beta at the moment. Purchasing a license guarantees updates on official releases in the future.

If you play guitar head to Jam Origin NOW. MIDI Guitar supports both Mac OS and Windows and there's an app for iOS too.

Pros: MIDI Guitar without the hassle. Great tracking and Polyphonic.

Cons: No string detection, but who cares!!

Davo
I cant get this to work at all in Pro Tools ( I have paid up for the full version 1.0 )

I have downloaded the LoopBe 1 file they recomend ( as Pro tools does not run VST) and all its done is stopped me accessing my mbox pro interface .
Since installing LoopBe ( as instructed be the Jam Origin Midi Guitar website )

Also - since installing LoopBe 1 - I can no longer use the stand alone Jam Origin Migi Guitar either ...., as when I go to ; Audio Device / Device / Avid MBox pro ASIO 64bit ( as I selected before when it was working ie; before the loopBe 1 install)

..........., Now - If I try to select my MBox pro ( ie; my main analog to digital interface) I get an " ERROR WHEN TRYING TO OPEN AUDIO DEVICE" message from Jam Origin which reads , " No hardware found or already in use "

So therefore , since ive Installed LOOPBE1 ( as recommended by Jam Origin ) I cannot use Pro Tools , NOR Jam Origin Midi Guitar .
- I am about to uninstall LoopBe 1 , and hope everything returns back to normal ......, but I am still at a complete loss as to how to get this Jam Origins Midi Guitar to work in Pro Tools ...., which is ' THE ONLY REASON I purcheased this software .