Language
The 6.1 update adds brand-new features, as well as some old favorites. And since it's free, who wouldn't update? Matthew Loel T. Hepworth reviews the newest 6.1 update.

Ozone 6 was released to great fanfare in late-2014, and received wide praise for its powerful new features and workflow. I reviewed Ozone 6, which you can read at http://askaudiomag.com/articles/review-izotope-ozone-6. So instead of starting over from scratch, let's look at the new features of 6.1.

The two new features of the Dynamics Module, Adaptive Release and Auto Gain, both work globally on each compressor. (Since it's a multi-band processor, you can have up to four frequency-based compressors.) Adaptive Release is very similar to the IRC (Intelligent Release Control) modes of the Maximizer module, in that the release times are constantly variable depending upon the input of the processor. When strong attack transients are detected, the release times are decreased. Conversely, when no strong transients are present, the release times are increased. The result is smoother compression that lacks the pumping and breathing associated with typical dynamic processors. 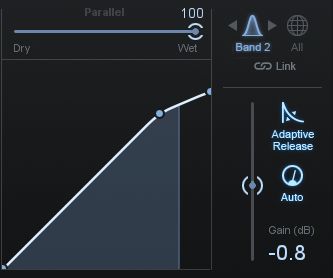 The Auto Gain analyzes the Dynamic Module input vs. output level, then adjusts the gain automatically. This makes it a breeze to set the right amounts of compression while not having to adjust up to four independent Gain slider settings to makeup the level. That allows you to program the character of the compression without being distracted by the resulting increase or decrease in gain.

Added to the IRC I, II, and III modes of the Maximizer module is a new Tube mode. It's loosely modeled after the Fairchild 670 mastering limiter with a soft-knee and fast attack. It's also feedback-based and has an exceptionally gentle release time. The easiest way to demonstrate the unique characteristics is to compare the Gain Reduction Traces in an IRC mode and the Tube mode using identical settings and source audio file. 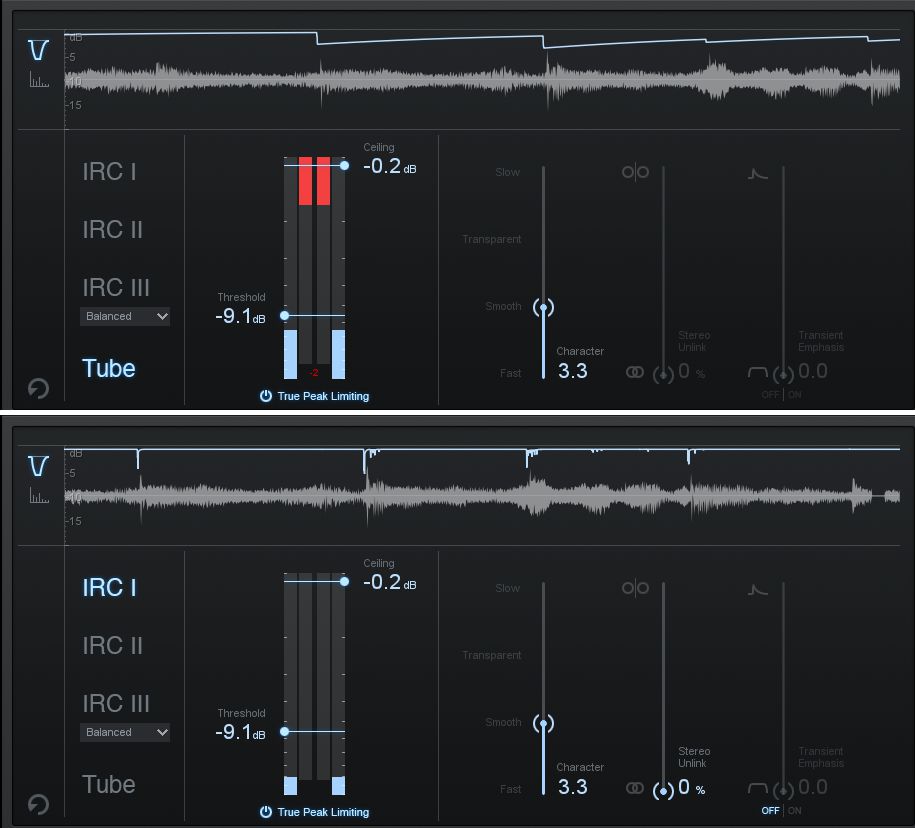 One might expect that long release time to result in pumping, and it can produce that effect on certain types of recordings. A rule of thumb would be to consider the strength and frequency of the transients in the recording. Or to put in another way, if Metallica wanted you to remaster "Master of Puppets", the constant strong drum transients would be better processed using an IRC mode. However, if Joni Mitchell wanted you to remaster "Ladies of the Canyon", the Tube mode would offer a very complimentary type of limiting. To my ear, the Tube mode offers a very gentle broadcast-like treatment found in the Fairchild, but also 'felt' like the tube-based Gates STA-LEVEL. (I never owned the former, but did own the latter.) While it won't conform the program material to a constant level like the Gates, the transparency of the processing did remind me of a time when music was mastered with a broad dynamic range.

When using the Tube mode, the Stereo Unlink and Transient Emphasis controls will dim out. I didn't miss those controls because iZotope crafted a dynamic response that remains true to the tube-based models of yesteryear. I just used the Character control until I got the result I was listening for, then moved on, which is exactly the philosophy you needed with a Gates (or a pair of them for stereo) because it required few controls (Input, Output, and Recovery Time) to achieve the desired result.

Figure 3. My old 1956 Gates STA-LEVEL tube limiter, which I sold years ago.

iZotope obviously listened to their customers regarding the way Ozone 6 originally handled presets. You see, when using the plug-in versions of each Module, you did have access to individual presets. However, when using the full version either as a plug-in or in stand-alone mode, you didn't have recallable presets for each module. Instead, recalling a preset would load new settings into each and every currently loaded module. In 6.1, you'll be happy to find a preset button (located above the solo button) in every module. I'll have to admit that I disliked the lack of module presets in version 6, so this is a most welcome addition.

You can also define either a factory preset or one of your own custom presets to load into Ozone whenever you launch the program. If you use a specific plug-in for mastering (like I do with the Insight plug-in that comes with Ozone 6 Advanced), you can recall that plug-in along with all your favorite modules and corresponding settings as part of your default preset. (A real timesaver!) 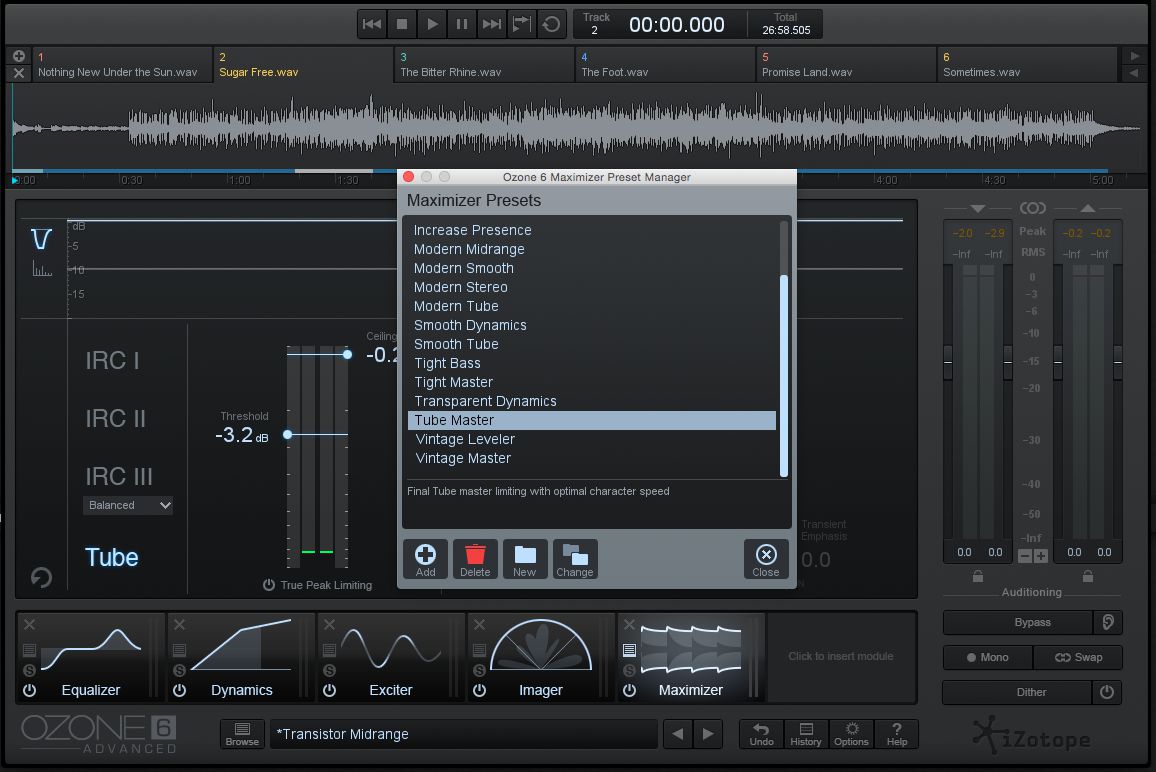 iZotope also refreshed the factory presets to take advantage of the new features of both the Dynamics and Maximizer modules.

When using the stand-alone version of Ozone, you now have an option in the Export Audio window to automatically number your files. The order and numbering are determined by the order in which the files are loaded into the program. 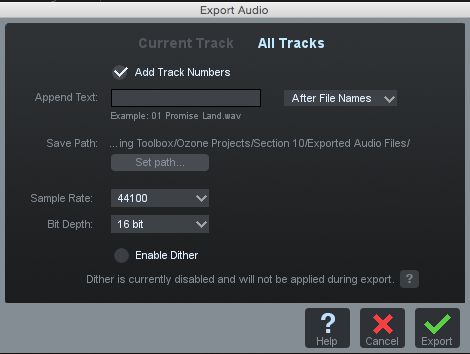 Ozone 6—despite a few slight nags—was already a mastering powerhouse. So how should I describe it now that it has these new features? More powerhouser? Powerhousier? By any description, it gives you more ways to finesse your mastering. And since it's a free update, I can't imagine any current user won't install the update.