With auto-mixing features and a wealth of other new tools and tricks, could iZotope's latest version of Neutron be just what the doctor ordered? Joe Albano gets into the fine detail.

iZotope—purveyors of some of the finest tools for mixing, mastering, and processing audio—has recently introduced significant upgrades to two of their flagship products, Ozone and Neutron. Ozone 8 was reviewed thoroughly by Matt Hepworth, so this review will take a look at what’s new in Neutron 2. 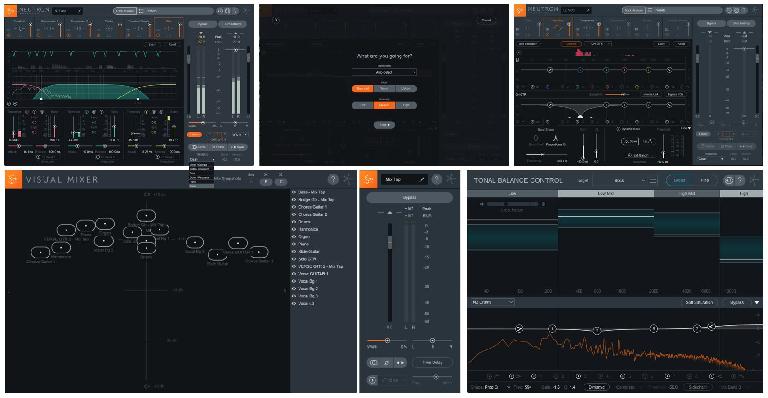 Neutron 2 and its included plug-ins

First released about a year ago, Neutron is iZotope’s all-in-one mixing tool, combining all the standard mix processors with some additional extras to help users get the best results. Neutron 2 incorporates everything in the original versions’s feature set and adds some significant new features. The main Neutron plug-in includes several mix processing modules—an EQ, two Compressors, an Exciter, and a Transient Shaper, along with a Limiter (Neutron Advanced also includes individual plug-ins for each module, as well as Surround capability, and Neutron Elements provides a budget-priced subset of the full-featured versions). Neutron 2 adds a Gate module to round out the basic processor collection. The Compressors, Exciter, Transient Shaper, and Gate can all be operated in single-band or multi-band mode, with up to three individually-configurable bands.

But when it first came out, Neutron’s real claim to fame was—and still is—its intelligent mixing tools, which use AI and machine learning to provide intelligent analysis, display, and auto-mixing features that can be a boon to both novice and experienced mixers. The Masking Meter displays two tracks and automatically detects problematic masking frequencies, allowing the user to dial up corrective EQ in either track within a single plug-in window, making short work of a consistently vexing mixing issue.

The included Neutrino spectral shaper analyzes each track, detects the instrument type, and automatically applies signal-appropriate narrow-band tonal corrections to very subtly enhance the clarity and tonality of the mix on a track-by-track basis. And Neutron’s signature Track Assistant feature can be employed to analyze each track and apply per-track mix settings, enabling and configuring any or all of the processing modules; the resulting auto-mix is presented as a “suggestion” to the user. This can be a convenient starting point for experienced mixers, or a great learning tool for novice mixers, who might want to reverse-engineer the Track Assistant’s choices.

Along with a graphic redesign (that brings Neutron in line with the new look of Ozone 8) Neutron 2 adds several significant features to the already-comprehensive set of processors and features. 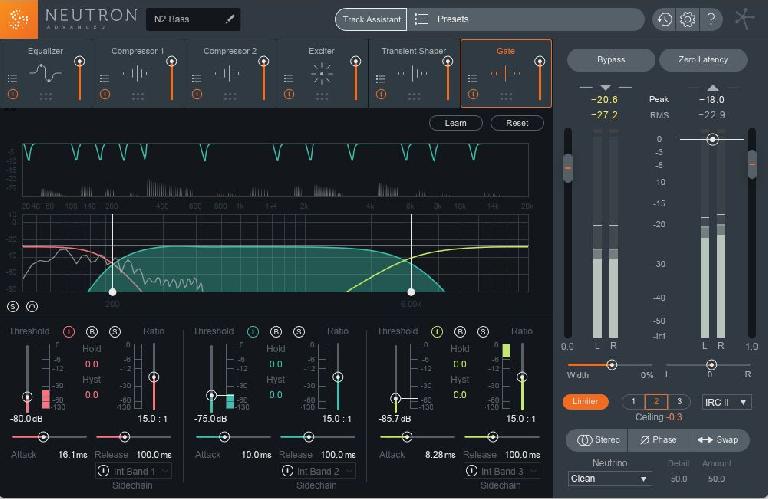 In the main plug-in, as I mentioned above, a new Gate module has been added. Like most of the other processor modules, the Gate offers single or multiband modes and full individual controls for each band (Threshold, Ratio, Attack, Hold, and Release)—there’s also a Hysteresis control (modeled after classic Neve console designs), which effectively allows for different Thresholds for opening and closing the Gate, which can help to avoid the typical gating problem of “chattering” (where the Gate rapidly kicks in & out when signals hover near a single Threshold). The Gate’s comprehensive controls make it suitable for just about any gating or expansion tasks, and it’s a welcome addition to the processing section of Neutron 2.

The Master section also has a few new features—there are now Pan and Width sliders (width can be adjusted from normal stereo to mono to enhanced “wide” stereo), and buttons for Stereo/Mono, Phase (Polarity) Flip, and LR Swap.

There have been various improvements made to the existing features under-the-hood as well. The Track Assistant’s auto-detection of instrument type now includes piano (this is also included in the built-in Neutrino feature), and TA will now automatically set Release, Ratio, and Attack in the Compressor(s) as part of its auto-mix settings. For the user, Track Assistant has a new dialog when it’s evoked, letting the user choose auto or manual instrument detection, and making it easier to initially select the Intensity of the mix processing (Low, Medium, High) and the mixing “Style” (Balanced, Warm, Upfront).

But the biggest new features in Neutron 2 are happening outside the main channel-strip plug-in. The Visual Mixer and Tonal Balance Control are separate plug-ins that are inserted into the Stereo Master channel strip, and communicate with other instances of Neutron 2 (and Ozone 8) to provide visual mixing and overall tonal display and adjustment capabilities.

The Visual Mixer offers a new approach to mixing: instead of mixing with the DAW mixer’s channel strip faders and pans, the Visual Mixer plug-in provides a display that shows the position of each track in the mix reflecting it’s level and LR pan position, and even the stereo width of each track.

These three aspects of the mix can be adjusted right from within the Visual Mixer, which displays and provides two-way communication with all the Neutron 2 plug-ins used in the mix. Adjustments made in the VM are reflected in the Master sections of each Neutron 2 instance (and vice-versa). And for tracks that may not have an instance of Neutron 2, another plug-in, the Mix Tap, lets them join the party. This is basically just the Master section from Neutron 2 (along with a couple of extra controls like a short delay and HPF), intended to be inserted last in a non-Neutron-equipped channel, allowing it to be included in the Virtual Mixer.

In the VM display, the individual tracks’ circles can be dragged horizontally (pan) and vertically (level), and dragging the handles adjusts track Width (the same Width control in the Neutron 2 Master section). In playback, the dot in each circle expands and contracts, functioning as a signal/level meter. There are three Mix Snapshots, and in case the display gets a little cluttered, you can Show/Hide each track in the track list at the right.

The Visual Mixer makes it easy to see the stereo soundfield at a glance, and it’s also very useful in showing how that soundfield changes from section to section, as well as pointing up when the mix might be a little left-or right-heavy as instruments drop in and out throughout a song. It would be nice if the vertical scale could be user-adjustable (to alleviate occasional overlapping), but as I said, the track Show/Hide feature can deal with that pretty well. Even though it’s a 1.0 version, the Visual Mixer offers an intriguing alternative to the usual mixer/fader display, and given iZotope’s track record, I’m looking forward to seeing where they take it.

The other new master channel plug-in is the Tonal Balance Control. It’s included with both Neutron 2 and Ozone 8, and is suitable for making tonal adjustments in both final mixing and mastering stages. The TBC combines a spectrum-analyzer-style display with the ability to remotely make track-based EQ tweaks to the EQs in both Neutron 2 and Ozone 8 instances in the mix, allowing the user to adjust the overall tonal balance on a per-track basis from right within the TBC plug-in itself. This is a terrific way to approach overall tonal adjustment, going a big step beyond the usual master-channel stereo EQ. 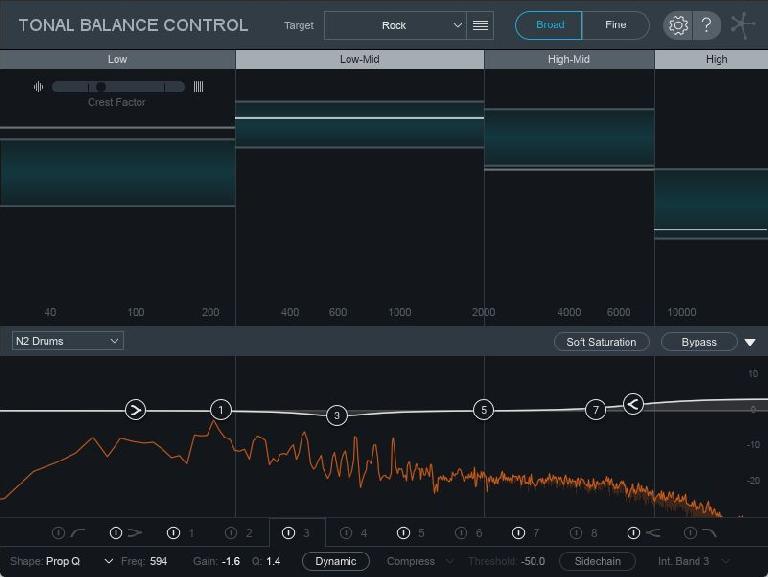 The idea of the Tonal Balance Control is to let the user compare the overall tonal balance of a mix with either factory templates (that represent the average overall balance of many analyzed mixes in various musical genres), or with user-created templates made from other mixes, and then make appropriate adjustments to bring the current mix more in line with industry norms or with other specific mixes (like for an album).

There are two displays. The Broad view divides the 20-20k frequency range into four bands, with a recommended level range provided for each band. A thin white line shows the current mix’s level in each band, and changes made in the EQ section affect this in realtime, which can help the user bring the current mix in line. The other display is the Fine view, which is a more continuous display of frequency balance—it offers a bit more detail, making it a little easier to see narrower frequency anomalies, which in turn can make it quicker to hone in on specific frequencies that may need to be tweaked in particular tracks.

The EQ panel at the bottom lets you select the EQ section from any inserted Neutron 2 or Ozone 8 instance in the mix, controlling not just the EQ nodes themselves, but all the advanced features in the original plug-in as well, like Dynamic EQ and Sidechaining. There’s also a spectrum analyzer to help visualize problem areas in the frequency balance of the selected track.

Inserted as the last plug-in in the Master channel strip, Tonal Balance Control can be a very useful tool, both for conveniently making final per-track tweaks to a mix (via Neutron 2 EQs), and global adjustments at the mastering stage (via Ozone 8’s EQ). Comparing a mix to various reference tracks has always been a good way to ensure that your mixes will sound good when heard as part of a collection or a playlist, and now TBC lets you add a visual reference to the process to augment the usual referencing-by-ear.

Neutron was a powerful, comprehensive mixing tool when it first came out, and the new features in Neutron 2 take it a big step further—N2 introduces not only a new processor and helpful under-the-hood tweaks, but also a new mixing paradigm and a very convenient finishing tool. Neutron 2 and Ozone 8 are being bundled together, and they do perfectly complement each other, both providing manual and automatic mixing and mastering tools. Existing Neutron users will undoubtedly want to upgrade, and those who haven’t yet tried it should definitely give Neutron 2 a good look—there should be something there for everyone, whatever their level of mixing skill.