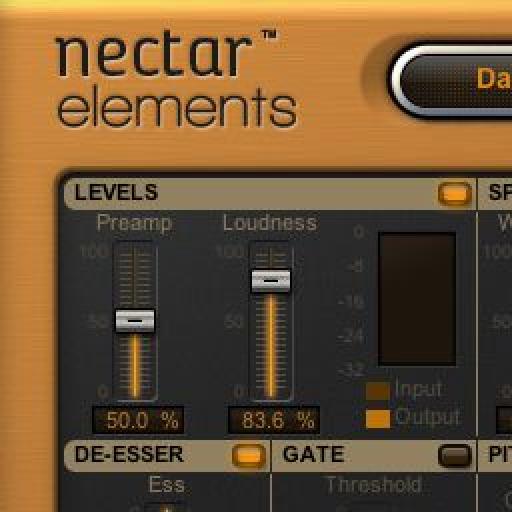 Language
iZotope's Nectar Elements is designed for the singer/songwriter/producer recording vocals on a budget. Lynda Arnold plugs in and tests out this suite. Find out if she sings its praises in this review.

Nectar Elements ($129) is the new vocal effects plug-in from iZotope. It's essentially a simpler, more economical version of Nectar ($299) with many of the genre presets and other important features of the advanced version.

Nectar Elements is targeted for singer/songwriters, podcasters and producers who are looking to jump into recording quickly when inspiration strikes without have to wade through and chain individual effects. As an artist, inspiration can be fleeting so it's important to spend as little time dialing in effects as possible and get recording while the ideas are fresh. Plus, it's fun to be able to record effected vocals, even at the scratch or brainstorming level, and play around with many parameters on the fly to add to the song spark while it's developing. Nectar Elements provides a very intuitive interface that allows the artists/producers to record in their own project studio without losing time on technicalities. Let's look at the interface in more detail and check out some of the genre presets. 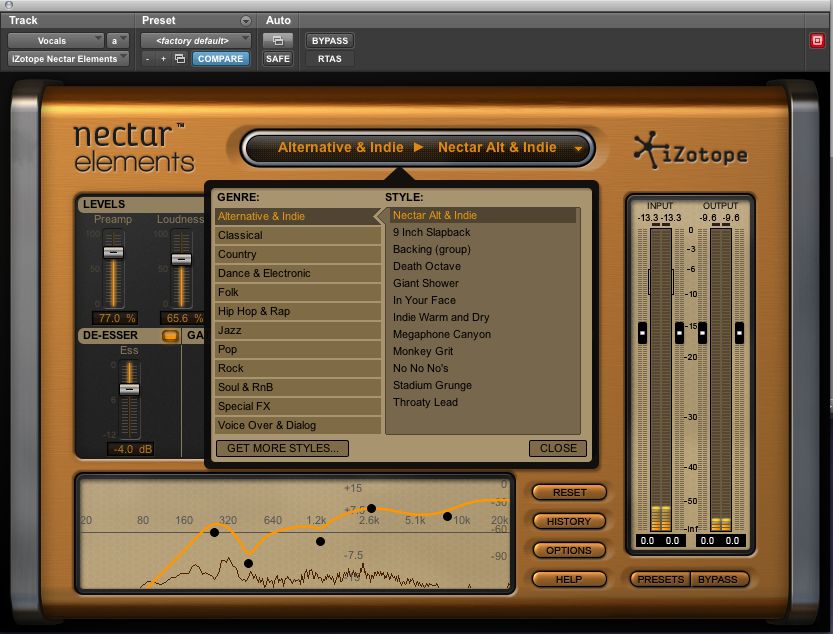 I loaded in Nectar Elements on an audio track in ProTools and started to go through the preset list to check out all the different sounds grouped by Genre. I had fun signing through all the choices. The audio designers have done a great job of offering diverse choices for each vocal type from wildly effected to clean and simple. It's very cool to be able to load up a 60's Motown or Grunge Rock sound and hit the record button in minutes.

The interface is simple, clean and easy to use. Every preset comes with Level controls (Preamp and Loudness), De-Esser, Gate, Pitch Correction, Space (Reverb/Delay) and an extra parameter that changes with each preset. In the pictured Nectar Alt & Indie preset, it's Tape Echo with 'Mix' and 'Trash' sliders. 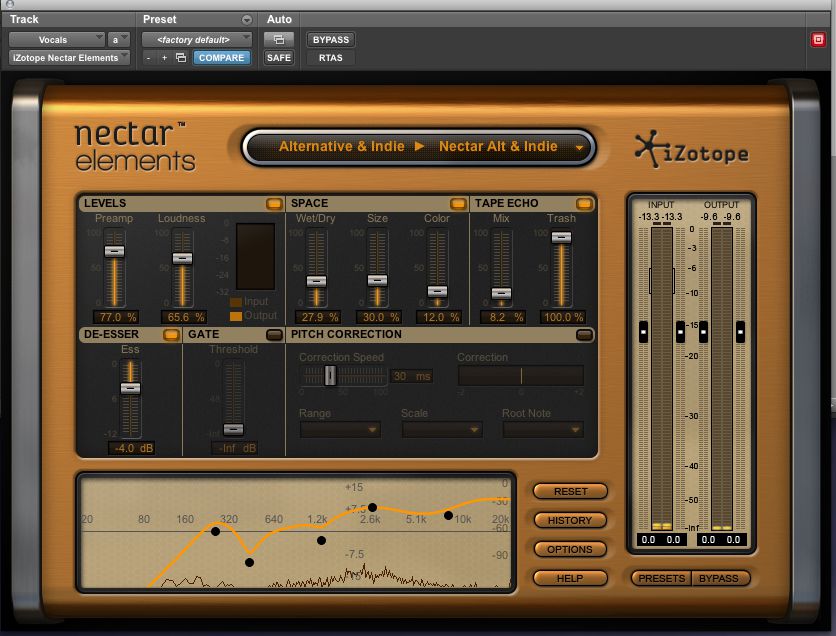 The Space section also changes from preset to preset even though the sliders are labeled the same. The iZotope team has designed specific reverbs and/or delay combinations suited for the genre you choose that can be adjusted with Wet/Dry, Size and Color settings.  In some 'Space' presets, the reverb is more of a plate and in others a Hall type reverb with delay on it for example. You can see that in the Stadium Trance preset the extra parameter is a Chorus with 'Amount' and 'Delay' sliders. 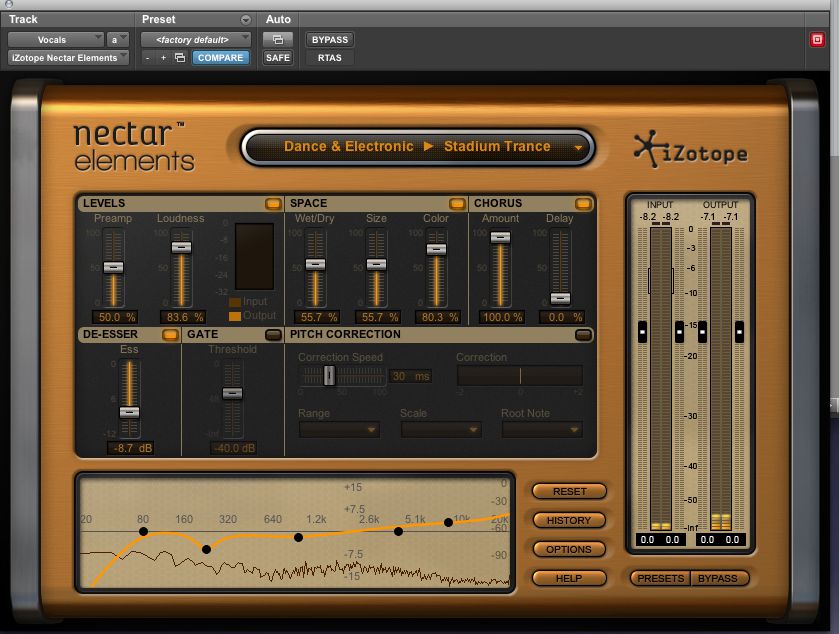 There's a Preset For That

In terms of the remaining controls, Nectar Elements has a bit of everything you need for processing vocals. You can turn parameters on and off at will to create your own custom presets. The De-Esser is excellent for controlling sibilance. I experimented singing some 'S' words and moved the slider up and down and was happy with the result.

The graphic EQ has a built in spectrum analyzer so you can see where extra boosting and cutting may be needed in your voice. The EQ is one of my favorite parts of Nectar Elements because it again eliminates the need for another plug-in.

I often found myself playing around with parameters of a preset and then wanting to compare what I did with the original. You can create a new preset with your own name by hitting 'preset' next to the 'bypass' button. If you don't like what you did to the preset, then hit 'Reset' button and it will restore the preset's original settings. The 'History' function is the handiest feature of building presets because it allows you to undo a series of steps rather than resetting your entire workflow. This feature really revolutionizes how we use effects plug-ins. You can see my action list in the screenshot below. I could undo the changes I made to the LEVELS loudness and preamp sliders by selecting the TAPE ECHO Trash setting. 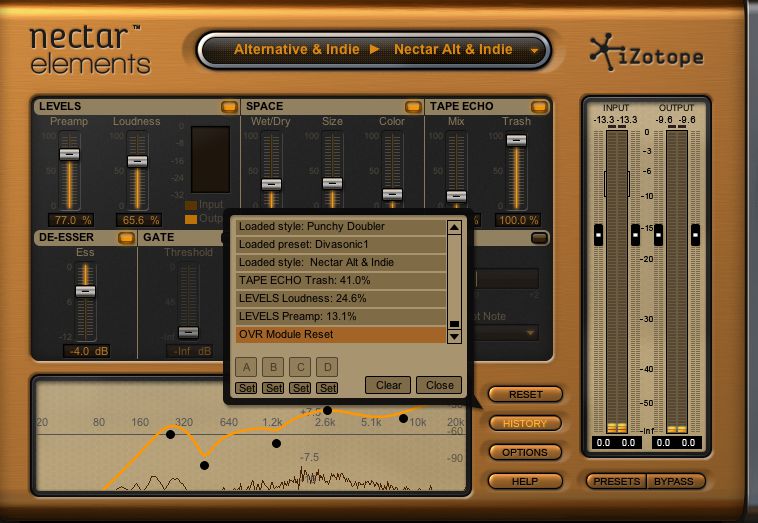 Nectar Elements in Use

There are so many options on the market for effects now and in terms of being an electronic music producer, I like to experiment with the many choices. No two of my songs are alike in terms of my vocal or flute effects and that's part of the fun.

I would consider using Nectar Elements in a few ways. First, to save time in the writing/recording process and then tweak and swap out effects in the mixing stage if needed. Second, It would be useful for me when I record vocals or flute for other producers who request a dry track for their own processing. Singing and playing with effects usually brings out nuances and playfulness in my performance that would be lacking when recording dry. I may even provide a dry and effected track in this case. Lastly, I would use the more wildly effected presets for creating interesting background vocals to layer with the lead vocal or create transitional vocal effects between, in and around song sections. There were a couple of presets I liked for lead vocals as well.

I would consider this tool useful for both professional and amateur producers alike. As an advanced audiophile, I like to spend time dialing in the right reverb, EQ and compressor, especially in the mix stage, fine tuning the settings. Nectar isn't quite the effects plug for producers who need more fine tuning controls but for singers and producers who need to load up effects quickly.

Upgrading to the full version of Nectar would be great for seasoned producers because you have more control over creating custom presets by chaining effects and the option to tune vocals in more detail. It's clear though that iZotope has created Nectar Elements to appeal to a broader range of artists and producers and has succeeded at doing so.

A trial of Nectar Elements is available here.

BenB
I've been using the full version of this for some time. I'm glad to learn they have a lite version. Great review!
dB_
Do you know if this Lite version is easier on the CPU? I had tried the trial version of Nectar a while back and with Pro Tools 9 and a pretty hefty quad core I ran in to some issues and it was unuseable.
Rounik
Hi dB_

Might be worth downloading the trial from the iZotope website and checking it out on your system.

I haven't noticed iZotope plug-ins to be any more or less CPU consuming than other plugs...