Language
When it comes to creative concepts for audio plug-in processors, iZotope have scored a winner with Mobius Filter that brings Shepard tone style effects and fat sounding filtering to your tracks.

Sometimes you just need a little movement in your track. However, setting up the automation, or dicking around with one of the more popular multi-FX, filtering plug-ins often times ends up pulling you into a time suck that seems to go on forever... Long after the inspiration has died. iZotope just released a really cool, very basic filter that adds that quick movement into your track without making your filtering overt, and too much. In this review, let’s take a look at Mobius Filter, and what it can bring to your sound.

If you’re familiar with Shepard tones, then you’ll know that they are auditory illusions of pitch that seemingly rise, or fall, infinitely. While Mobius does not use any form of pitching, infinitely rising and falling effects are introduced through filtering.

I was a little skeptical, at first, as from the look of Mobius, it almost seemed like iZotope were returning to some of their old days of one-trick pony plug-ins that only get used for particular occasions.

I am actually very happy to report the humbling that I received after the first time I dropped Mobius onto a very boring pad that was keeping me from completing a mix that had previously eluded me. Seriously, it was really one of those moments where I had to just stop and listen for a while, after dropping Mobius onto anything, without tweaking anything. It just sort of pulled everything together, while adding a lift... Or a downward pull. Let me explain more. 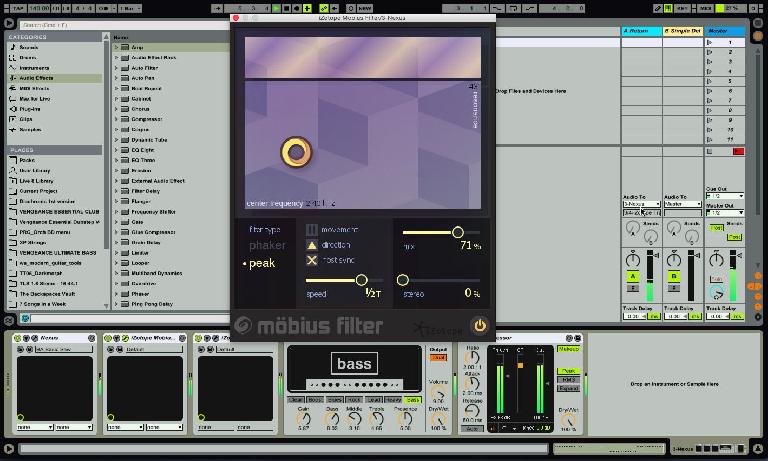 The most amazing feat of a Shepard tone is its ability, through illusion, to think that you are perpetually rising, or falling. This, of course, can lead to a slight feeling of elation, when experienced while relaxing. Or, even making feel like you’re descending from a cloud. Now, imaging syncing a Shepard tone, to the rhythm of your song, and having it modulate one, or even a group of your instruments?

And, don’t think that all of the magic comes from a rising, or descending LFO. Where I think iZotope scored the biggest hit was with the defined parameters in which Mobius is really encased.

The filter really is the star. It has two settings: Phaker, which enables filters with a positive and negative gain, and Peak, which enables filters with positive gain only. I like Phaker for bass synths, with Mobius, itself on a low mix setting. The slight filter dips along with the gain and added a really nice, unforeseen texture that I really liked. Peak is much more pure as a setting, in that it’s more of a high pass, and is really cool for adding a little bit of high end crispness. 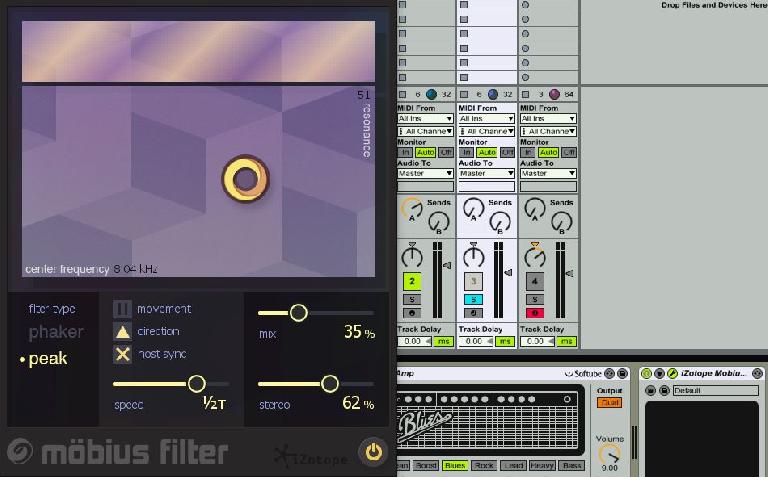 What makes all of this so special is the ease beginning, ending and modifying the direction of the movement.

Sure, $50 bucks these days can be stretched a lot farther than it used to. But you also get what you pay for. iZotope as developers have had a long time (since the beginning) to develop those virtual filters for not only big money mastering plugs. And I think that’s where I’m a little smitten with Mobius. Yeah, it’s a very basic plug-in that gets in there quick and does what it’s going to say it will do, without stealing all the attention for itself. It’s a team player. And, when you disable the Movement, within the filter, it’s still a really nice sounding plug-in that can take the place of some of your phaser, flanger, chorus, and won’t have you stuck playing with it, to dial it in. That XY pad, gets you there quick.

Cons: Could be a little cheaper.