Language
The latest collaboration between famous Trance artist, BT, and iZotope has caused quite a stir since its release. BreakTweaker was also featured in our NAMM 2014 Top 10 products and with good reason.

If iZotope wasn't already there, they are now. They have become one of those companies that can make an announcement, and everyone will stop what they are doing to see what it is.

This is even more true, when BT's name is in association. Two years ago, when Stutter Edit was announced, people moderately learned what all the fuss was about, at NAMM. This year, BreakTweaker was the first thing out of many of my colleagues' mouths, when I would ask what's worth looking at. But, does it live up to the hype, as well as the growing legacy of iZotope/BT collaborations? Let's jump in and find out!

"At NAMM this year, BreakTweaker was the first thing out of many of my colleagues' mouths."

If you've been following electronic music over the last 20 years, you've probably noted that it's become increasingly difficult to recreate many of the textures, grooves and sounds, on your own. Audio and MIDI editing tricks that aren't always apparent to the intermediate and beginner level musicians can be heard all over new tracks. Because the methods and utilities for creating the effects that these 'tricks' produce are somewhat cryptic, and difficult to produce, many people opt to just go with sample libraries, and save some time.

"BreakTweaker is an amazingly expressive beat creation (and melodic) instrument that goes beyond making it easy to create simple beats, effects and melodies."

iZotope and BT, saw this as an opportunity, as well as a way to create a tool/instrument that speeds up the workflow. And, it really does do that. 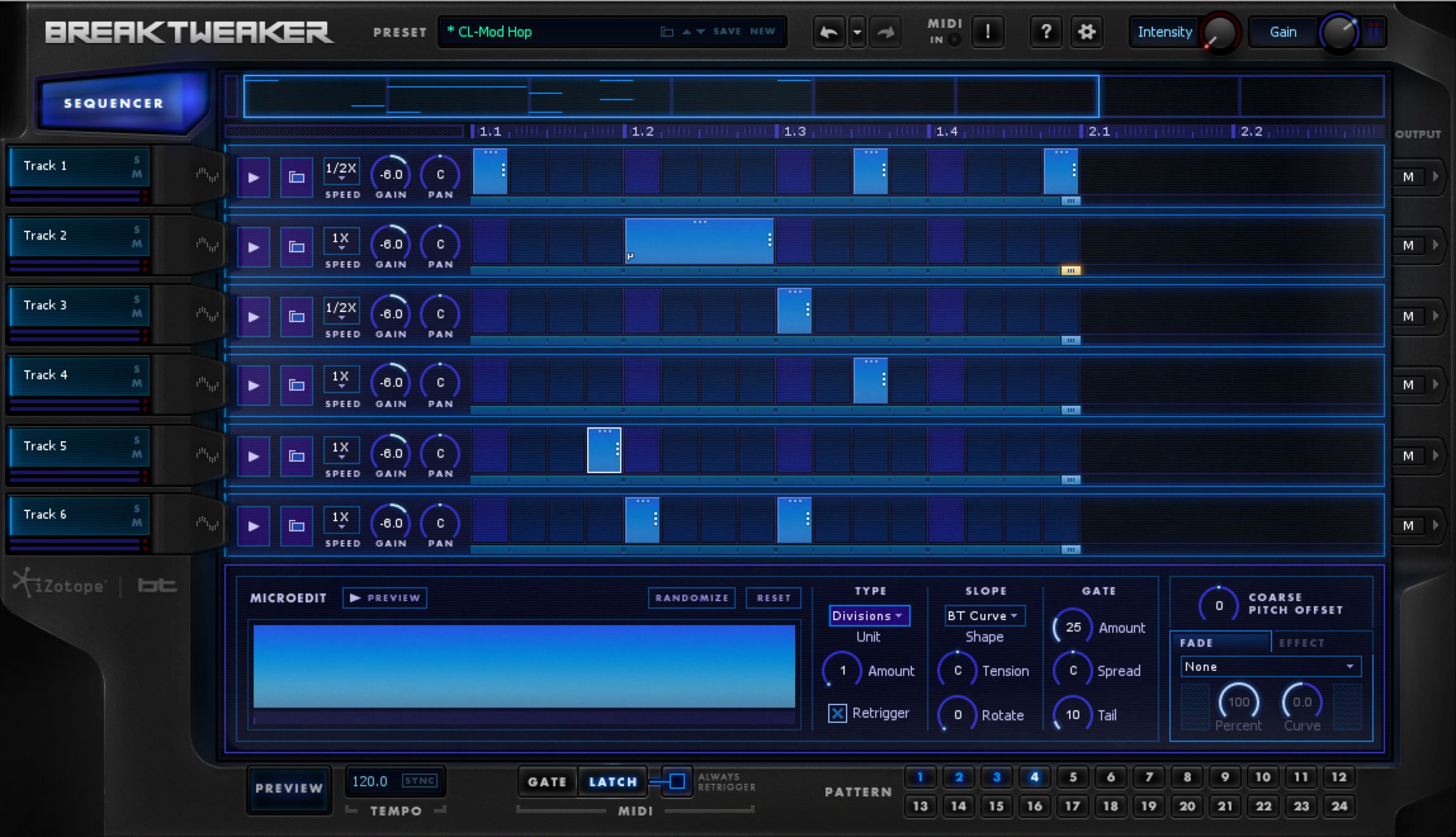 BreakTweaker is an amazingly expressive beat (and melodic) creation instrument that goes beyond making it easy to create simple beats, effects and melodies. It also allows you to easily incorporate sick change-ups, complex effects changes, highly intricate glitches and complex melodies that would take much more time to create using only your DAW. And, because each note within the BreakTweaker sequencer can be programmed easily, and even randomly, with several complex tweaks, you can be very confident that your sound will experience a major upgrade, upon purchase. It's that good.

The Anatomy of a BreakTweaker

Pros and newcomers alike will enjoy a seemingly simple interface. Don't let this fool you. Within the simplicity lies deep power. But, to start off, simply load a preset and start clicking in patterns, or use your keyboard to quickly trigger several patterns assigned to the keys on your MIDI controller. Yep, like StutterEdit, BreakTweaker relies on your MIDI keyboard for pattern assignment.

"The really cool thing about the synthesis engine is that, while it's capable of doing some really intense modulation, and features multiple synthesis modes (...) it's extremely user friendly."

If you would prefer not to trigger your patterns this way, you'll be overjoyed to note that you can switch between each pattern with the Pattern buttons at the bottom. In addition, you'll be happy to know that you can run BreakTweaker in and out of Host Sync. So, it can be as easy as loading up BreakTweaker alone, with your own presets, pressing play, and doing the rest of your set in nothing but BreakTweaker. I can see BreakTweaker becoming a mini-DAW on its own for many artists, especially those producing dubstep, EDM, minimal techno, EBM, industrial, noise, glitch, downtempo, progressive trance, etc.

A nice touch that iZotope threw in was the ability to load presets with, or without, patterns. This can really speed things up, as you never have to worry about going through and deleting the sequences. But, if you're curious to hear that preset in all its glory, you can load up the beats as well and use some of the factory beats for your song.

Is it a Sampler, or a Synth?

At its core, BreakTweaker is a very powerful sampler, step sequencer, and synthesizer. iZotope provides you with a whopping 2 GB of samples and presets. And, yes, they all sound quite nice, modern, and will instantly get you down with the latest electronic trends.

The really cool thing about the synthesis engine is that, while it's capable of doing some really intense modulation, and features multiple synthesis modes (additive, ring modulation, amplitude modulation, and frequency modulation), it's extremely user friendly. Seriously, everything is right there, and you can easily blend and morph between several waveshapes, and blend between the first and secondary oscillators that exists up to 36 times (2 per Generator, 3 Generators per Track, 6 Tracks per instance of BreakTweaker) within a BreakTweaker patch. So, you can actually go wild with melodic parts, as well as design some slick, synth-based drums.

If you switch a track over to Sample, you'll switch to standard controls that you'd expect for dialing in either a sample, or a loop. Whichever type of generator you choose, you'll get way more than the standard synth, loop playback devices you may be used to. This is because the BreakTweaker sequencer is a very simple, but rich instrument, on its own.

Oh, and yes! You can import your own samples!

Learning to Play a Sequencer...

The sequencer in BreakTweaker is nothing short of astounding. As I mentioned earlier, each step in the sequencer can be programmed to do several glitches, shifts, pans, speed, and more using the highly useful Microedit window. You can quickly and easily (meaning: no setting up grid resolution, zooming in and spending a morning drawing in 32nd, 64th and higher resolutions, complex pans, complex audio pitching, etc.) perform complex edits that would take minutes at a time, in a DAW. In BreakTweaker's Microedit window, everything happens in mere seconds. You can even assign certain effects to take place, like filters, bit crushing, and so on, easily, on individual steps.

But, what's even more impressive is that stutters, glitches, pitching, and so on don't sound rough, harsh, or crude. Everything sounds quite elastic and smooth. Don't get me wrong, you can get noisy, but you can also enjoy very polished, organic and fluid sweeps, squelches, fade-ins and fade-outs. It's crazy how easy they've made this. It removes hours of editing from the equation.

BreakTweaker is an extremely polished labor of love that you can tell was more than a product designed to merely fill a void. Some serious thought went into this. And, because it affords anyone the ability to do edits that were once quite time intensive, I would highly recommend this for beginner, as well as veteran, producers.

"BreakTweaker is an extremely polished labor of love, that you can tell was more than a product designed to merely fill a void."

I will say that it may be a little CPU heavy if you're running an older machine (2008 Macbook Pro) like me. However, due to the sheer complexity of what iZotope and BT have made easy, it makes sense. So, I'm really starting to consider upgrading to a more modern Mac. Overall, BreakTweaker is a potentially game-changing purchase for anyone who is willing to sit down with it.