Language
Getting inspiration from old school producers for contemporary music is what Irrupt's Flashback: Forward sample and loop pack is all about. There's musical riffs, FX, beats, percussion and more.

If you’re excited about rave music from an older era, and you’re not looking to spend an arm and a leg obtaining ‘that sound’ being the dry, distorted 808s, 909s, whistles, LFO Sweeps, white noise, and so on... Then you have to check out Flashback: Forward. A small, competitively priced sample, loop package in WAV format that really might help you keep the party going all night.

There’a lot to be said for humor in a release manual. That being said, I wouldn’t have minded a little more info, outside of a really good glimpse, through humor, into the heart of what really was an audio adventure. Start the slide show, please:

I have fond memories of the raves of old. Honolulu, in the early to mid ’90s had many of them. And, I frequented quite a few. It was also an interesting time, as even under our noses, industrial DJs were moonlighting at raves, and rave DJs were flying in from all over the world to spin with whoever. Regardless of the genre, they all had 909s and 808s in some form, or fashion. Or, just E-MU samplers, Akai Samplers... Dude, it was all crazy.

When you kick on the demo MP3s, especially with the iTunes visualizer (I mean, what screams ’90s raves more than a visualizer shifting psychedelic fragmentations over and through your eyes), the pulsing beats and throbbing bass lines, if you close your eyes, really can give you a small whiff of pre-club, smoke machine wafting, three dudes on the dance floor, already, with one chick trying to find a pay phone, walking around, asking if anyone has seen one. The heart is really in the right place.

I love the minimally built, percussive loops. The more minimal they are, the more thoughtful they are in subtle rhythm shifts, even though they may seem, at first, critically robotic. As you begin stacking them—a few on top of another, they build. What seemed like small little bird chirps of sound, slightly pitched down, are suddenly gating, pushing patterns of sound... And, you feel your own body moving. How’s that? 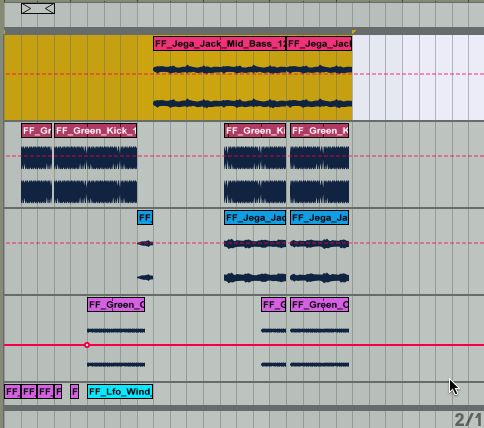 In addition to the intelligent barrage of beats, there are way more than a dozen riff loops that may seem few and maybe an after thought to the uninitiated. However, I need to praise Irrupt on including that which is needed, and only that. There were many forms of stabs being sampled and played around in the ’90s club scenes. But, with careful programming and intelligent source sampling, it’s not hard to ‘nail’ the sound, with just a few synths. The spirit of that time is definitely alive here.

The Song Starter packages, included, and making up a large part of Flashback: Forward are really a lot of fun. And, are built on the rhythms you always wish you could’ve built, with the drum machine you did not have, back in the ’90s. Green, one of the starters, was especially cool; having a nice, driving beat that kinda pierces the heart frequency in just the right way. And, the synth parts, are especially nostalgic and would do well in drag shows, rave themed house parties, $30 dollars, a steal for the nostalgia minded DJ/promoters looking to extend their sets with original, and classic house tracks. Check out the audio file below for a sample of my set with Flashback: Forward, here.

Wrapping Up the Fun

I had a great time with Irrupts nostalgic, aural, sonic presentation of their remembrance of the ’90s. It’s got a lot of character, in text, and in WAV format. And, it gets the job done, without costing an arm and a leg. If you’re new and have a vision of the older club life, jump on this, now!

Pros: Great arrangement of loops, stabs, melodies and thick arrangements that would do well in many forms of club style performances.

Cons:  Would love a little more explanation in the documentation. Tips, intentions in design, etc.