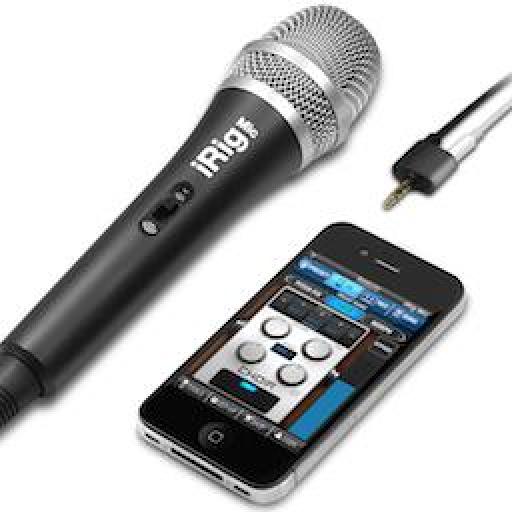 The iRig Mic is a hand-held condenser mic and both looks and feels professional and sturdy. It uses a dual mini-jack connector which slots neatly into the headphone output of your iOS device and allows you to plug-in your headphones (or speakers) so you can monitor either while recording or after the fact. 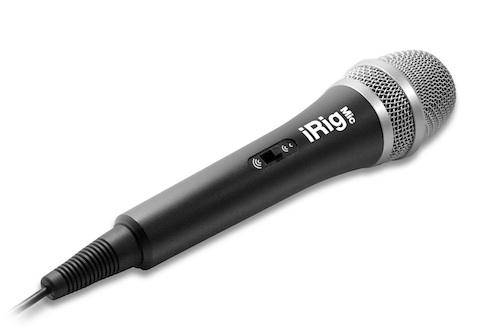 Setup is effortless and in less than a minute I was up and running. There's really little else to do other than plug it in and get ready to record!

IK Multimedia used to be known primarily for their desktop Mac/PC Software Instruments and Samplers but in the past few years they've begun reaching the eyes (and ears) of a whole new audience: The iOS mobile musician. Vocalive is a great example of a well-thought out iPhone app for musicians and is really fun to play with, so I was curious to see in what way iRig Recorder would be different.
Well, iRig Recorder feels like a cross between a single-input mixer and a portable digital recorder/editor. It's suitable for vocalists recording a demo, a journalist recording and editing an interview on the move, or anyone who wants to record their ideas, thoughts (or in my case) grocery list! It's what Apple's Voice Recorder app should have been: featuring intuitive to use editing functions with useful effects (e.g. noise-reduction) and some novelty effects (e.g. Pitch Shift) thrown in for good measure.
The Setup tab allows for detailed level input and output control, latency settings, real-time monitoring and even an Auto-Record option (recording will begin as soon as the app is launched)! 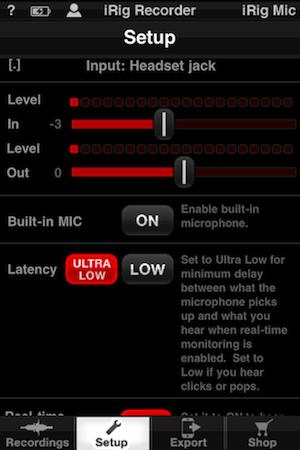 Recording is easy. Tap the '

Chris Polus
Thanks for the review Rounik. I bought the iRig Mic as well and it had "comes with free audio recording app" all over the website and the packaging. I was a little disappointed that you only get a "light" version of the iRig Recorder app although you already spent money for the hardware. And I found it very annoying that IK tries to sell you the upgrade and extra effects at almost every click when you first launch the free version of iRig Recorder. Come on, I just paid for the Mic!

Also, there are buttons in the light version that are actually only available in the paid version. So when you click them, it asks you to upgrade to the paid version etc. I don't like this concept. This just as a sidenote. The app might be cool, but the upselling approach is not.

I tried out other apps as well and can say that the mic worked with the other apps, too (e.g. iRecorder, iTalk).

Thanks for your feedback. I can't comment on the free version of iRig Recorder as almost as soon as I began using it I upgraded to the paid version, which in my humble opinion is very reasonably priced - and works great... though I acknowledge your point of view.

I think technically it'd be very hard (or impossible) to offer a full version of an App through the App Store only to those who have bought the iRig Mic hardware.

That said, what do you think of the quality of the iRig Mic? What do you use it for?

Chris Polus
I just got the mic a few days ago and didn't have time to try it out yet.

I bought it actually just to try it out and find uses for it later :) The mobile flexibility interests me and sometimes I need to try something to see if it fits into my workflow somewhere.

Sometimes I'm on the road and want to record a sound, a musical idea and it would be cool if I had my iPad and the iRig Mic with me, that has a small footprint in the bagage. I wouldn't need the whole equipment and would get better quality than with the built-in mics at the same time so it would be a balance between quality and size for a sort of on-the-go usage. At least that's what I'm hoping :)
Rounik
Definitely agree that the smaller footprint makes a real difference... for me I can choose to take just my iPhone and the mic or the iPad and the mic. Pretty flexible all round... and a very economical solution.

Good luck with your tests!
Philou
I would like to know : is the iRig Mic a professional quality mic?

What do you mean by "Professional quality"? Some people might relate "pro quality" condenser mics as those that cost over $500 - others might say $1000+

I think it's a good quality mic that gives good results considering it's price. At about Â£40 GBP it's definitely on the more economical end of the spectrum.

What do you want to use the mic for?

I asked you this because I did not see the specifications of that mic and I did not want to buy a "bad" mic, even for not much money.

This mic could help me in record a conference as well as a concert or a piano.
Normally, I use Logic Pro for that with two mics. But it could be fine, to have something to have with you at anytime (as mu iPhone for example).
Now, if you tell me it is a good mic, I could try it...

I haven't tried it for any "studio critical" work. I've used it for recording ideas and voice over/interviews - and it was acceptable quality. I'd choose my Rode Studio Mic over this in terms of quality (it is at least 3/4 times more expensive!) and my Sony PCM-D50 also is more accurate as a stand alone portable... but as something to use directly with my iPhone or iPad it's great.

You may also be interested in the upcoming Apogee Mic for iPad and iPhone. Looks likely to be about twice the price of the iRig Mic. I haven't had a chance to get hands-on with it yet, but as soon as I do you can expect a review here on the MPV Hub!

Best
Rounik
dpz
QUESTION: if I pay full version iRig Recorder app store... I can use with built-in mic and all features available, yes?... understood built-in mic poor quality... but not REQUIRED to use the app only exclusive with the iRig mic, correct? Please advise if I'm missing something. much thanks.
Rounik
Hi drz,

That's right. The iRig Recorder App works fine with the built-in Mic as well as the iRig Mic.

dpz
much thanks for rapid reply :-)
Chris Polus
For all of you who are still interested in the iRig Mic. I recorded a passage with 3 mics, the iRig Mic (50â‚¬), the iPhone 4's built-in mic and a little more expensive AKG Perception 220 (160â‚¬).

It's not a scientific exercise, just a way for you to compare how it sounds.

I had quite some pain finding the right mic position or level meter setting. Rounik, you said the iRig Mic did admirably well in your tests. In comparion, I found it hard to get decent recordings out of this thing. Did I do something wrong?
Rounik
Hi Chris,

However, my real comparison was between the built-in iPad/iPhone mic and the iRig mic. I don't know if it's fair to compare the iRig Mic to a studio microphone that costs more than 3 times the iRig mic and cannot be used with any iOS device but must be used with an audio interface for your Mac/PC - so we're talking separate and more expensive AD/DA converters and preamps.

Another point to remember is that even when recording with microphones 10x the price it can be normal to apply compression, EQ and noise reduction after the fact.

I think for the price and for those who would like to step up from the built-in mics and need better quality and a more professional sound for 50 Euros it's a good deal.
Chris Polus
True, I'm not comparing apples to apples here. Certainly not from a usage perspective. Having the iPhone and iRig Mic is different from having to bring a laptop, external audio interface and a studio mic (or portable field recorder for that matter). Granted.

But I guess for those people who asked if this mic was of good quality for recordings (Philou asked for a "professional quality" mic), they at least have some audio bites to hear for themselves now :)

At we had an interesting discussion.
Rounik
Hey Chris,

Yes, I agree and thanks for posting the link to your audio samples. Hope this helps others make an informed buying decision.

In fact I didn't mention my own portable audio recorder, Sony PCM D50... I was going to compare the iPhone + iRig to the PCM D50... but the D50 cost in excess of Â£350 GBP two years ago - seemed like an unfair comparison. But, there are times when I would choose the D50 over the iRig and vice versa.

I think it's nice to have a selection to tools that you can choose for the task in hand.

:)
adam8
Came across this link today.

This podcast led me to the link, and may be of interest as well:

http://touchsoundpodcast.com/?p=134
Hello!
I've bought the iRig because I love to sing just as a hobby and would love to record myself. I just cannot figure out how to record over the songs I have on my iphone and take the vocals off of them and then, once recorded, how to save them... can someone pleeeease help me? Which apps do i need and how do i import a song and record over it? :) I cannot find a tutorial anywhere........
THANKS A LOT