Language
How does the IK Multimedia iRig Key 37 Pro fare? Hollin Jones finds out how portable, playable and pleasurable it really is.

Despite the advent of more alternative methods one can use to input data into music software, the trusty MIDI keyboard is still king when it comes to triggering. And what a lot of people need is not in fact some space-age mega-keyboard but something that will fit on a desktop or can be carried around easily. IK Multimedia has been developing its iRig Keys series for a while and the Pro model is a Mac/PC-dedicated controller. It’s important to recognize that the white bodied model is designed for computers and mobile devices whereas the black bodied model—as reviewed here—is only for computers. This isn’t as evident as it could be given the very similar names of both models, though this one costs less. Check before you order that you’ve picked the one you wanted! IK says that this model will work as a generic USB device on iOS if you have a Camera Connection Kit, or Android with a USB to OTG adaptor, which are inexpensive.

Simple and uncluttered, it powers over USB.

The keyboard is amazingly light and easy to carry around. This also means you won’t exactly be able to throw it in amongst the amps, so a carrying case would be a wise investment if you do plan to keep it in good condition. It comes with a micro USB to USB cable which carries power and MIDI to your Mac or PC, and it’s class compliant so no drivers are needed. The USB port is on the side of the keyboard, presumably because they figure you’re likely to be using it in front of a computer or laptop rather than in some other configuration. This makes sense, though the small size of micro USB connectors means you’ll want to be careful not to bend it accidentally.

The selling point of this keyboard is the keys, and you wouldn’t generally get full sized keys in a unit this small. Having 37 as opposed to 25 keys really does make it more useful for playing two-handed parts as well. The keys are quite lightweight but perfectly playable, and it makes maximum use of its small body by taking up most of it with keys. There’s a pedal input on the back as well for connecting an optional sustain or volume/expression pedal. Again, this makes it possible to play more expressively than you would normally be able to on such a small instrument.

There are pitch and mod wheels of course, plus an assignable volume/data knob, octave and program buttons plus four user slots to store different setups. As is usually the case on MIDI controllers, notes can double up as commands for things like setting MIDI channels, transposition and the like. Despite not having a visual readout onboard, these functions are pretty easy to get to grips with and work well. IK makes a ton of software too, of course, and you get some thrown in when you register the hardware: SampleTank 3 SE, The Grid construction kit and a choice of five virtual instrument collections to go with it. 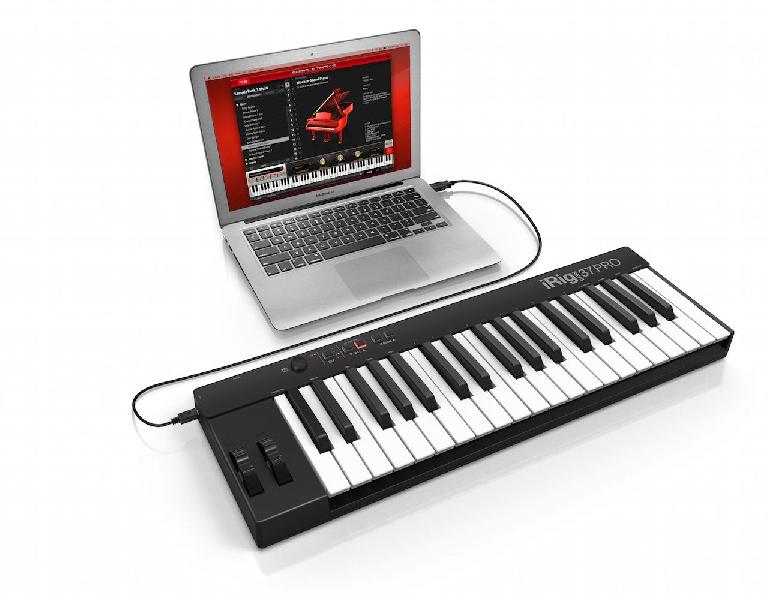 Doesn’t come with a free laptop unfortunately but you do get some software.

iRig Keys 37 Pro is an uncomplicated but easy-to-use MIDI workhorse for anyone needing a playable keyboard that doesn’t take up loads of space. Add a sustain pedal and you have a very solid way to play expressively with only a tiny footprint.  They are available online for a bit less than the list price too: around £75 / $110.

Cons: Light construction means take more care when transporting it. USB plug in the side could be prone to accidents.