The latest addition to IK’s controller lineup is its most portable to date. And it has a few unexpected tricks up its sleeve, as Hollin Jones discovered…

IK is firmly established as one of the leading developers of music gear that works across your desktop and mobile devices and its iRig Keys family of MIDI controller keyboards now has a new member - the diminutive iRig Keys 2 Mini. Designed for use any time space is a factor, or when you want to travel as light as possible, it has most of the features of its two larger siblings, barring a couple that are omitted for reasons of size.

It’s very small and lightweight, which is of course the point, but also solidly built. As with any gear, if you intend to carry it around in a backpack, some protective covering is advisable. There’s a lot of flexibility when it comes to I/O. You get a mini USB port on the rear and there are USB-A, USB-C and Lightning cables in the box meaning it can be connected to your iOS device, Mac, PC or Android device. Power is drawn from USB, even when using a phone, and you can also connect a USB power supply or battery pack when using it in standalone mode. Two mini MIDI adaptors are also supplied for this use case, so it can be used as a MIDI controller with no computer present. Hook it up to a modular synth or hardware drum machine and you can play away with no need for any software. 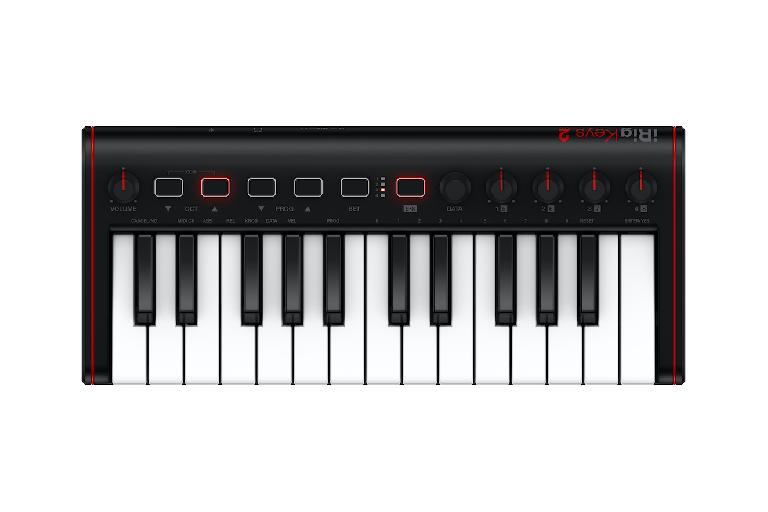 A feature you may not be expecting is a headphone out, with audio carried from your device back to the keyboard and onward to your headphones, or indeed powered monitors. There’s no audio in, so no audio recording, but streamlining MIDI in and audio out to a single cable is really helpful in devices like recent iPhones or iPads that don’t have a physical headphone socket. It means you don’t have to choose between using a device’s own speakers or using bluetooth speakers, which can suffer from latency when performing live MIDI input. It works at up to 24-bit, 96kHz quality so you won’t be sacrificing any fidelity despite the compact, bus powered nature of the controller.

IK would probably suggest you paired it with their iLoud micro monitors - though of course other powered speakers are available! Joking apart, the addition of an audio out makes life much easier, effectively making the system into an all-in-one way to play MIDI and monitor audio. For those wanting to record audio, IK does also make the iRig Keys I/O series, which has a full audio interface built-in. 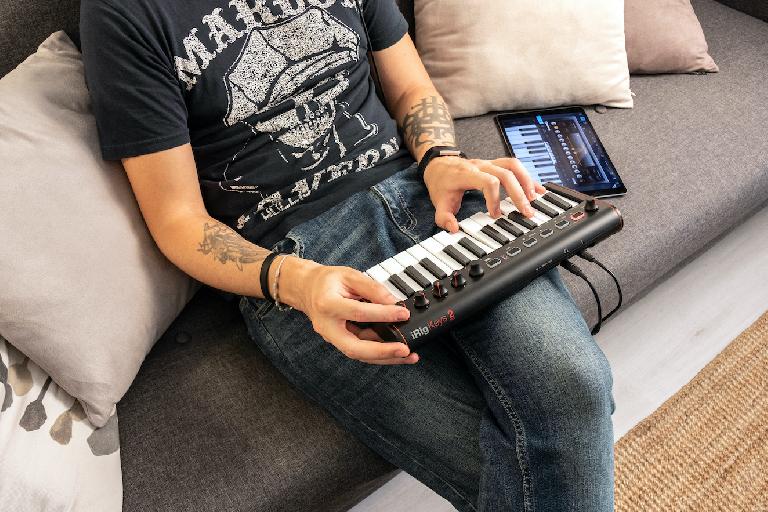 The 25 mini keys are small - obviously - but perfectly playable for rhythms and simpler melodies and figures. There’s no sustain pedal input which is a slight shame but also perhaps not a surprise on such a compact unit, as every inch of internal space counts. The two larger models in the family do have a sustain input, if more expressive performance is what you’re after. They also have pitch bend and mod wheels which the Mini doesn’t, again for reasons of space.

Beyond these factors, the other controls are near-identical. There’s no screen but there is some button backlighting for feedback, and virtually all the keys have a secondary function, clearly labelled, so you can do things like changing MIDI channel, entering values, changing programs and more from the keyboard itself. It doesn’t have a transpose-by-semitone option like the two larger models, presumably due to the small number of keys meaning you would run out of area to play in quite quickly.

There are four rotary controls and by pressing the 5-8 button these switch to control a further four, giving you 8 knobs in the space of 4. These are assignable to different functions, and there’s also a push-data knob that is also assignable for changing values. Program up/down buttons let you quickly shift program numbers and there’s quick octave controls that double as an Edit command. You also get a master volume control. This approach of entering data with key presses and no display is a little old school, but many people will only be doing a couple of operations with any great regularity, and it quickly becomes second nature to hold a key combo. The trade off of course is portability and lower power consumption - adding a screen would negatively impact power draw.

As a controller, it works with any software you connect it to and indeed with external hardware via the MIDI output cables. IK has obligingly bundled various software goodies, which become available once you have registered the hardware to your online account. These span desktop and mobile and include SampleTank 4 SE for Mac and PC with 2000 sounds across 30GB and unlocks bonus sounds for iOS apps SampleTank, iGrand Piano, iLectric Piano for iOS and the last two also for Android. Even better, iOS users get an unlock for Cubasis LE, Steinberg’s entry level mobile DAW which can itself also be upgraded to the full Cubasis experience via an in- app purchase.

So who is the iRig Keys 2 Mini for? Well, anyone working primarily with MIDI who needs to operate in a tight physical space, or who needs to travel while they work. And really it could be just as at home in a studio too. Maybe you do have a desktop computer and a master keyboard, but you want something to trigger your iPad synths, or a modular synth, and it lives on the other side of the room. Plugging one of these in would let you not only play software instruments but also record them, by connecting up the audio out.

In perhaps a more common scenario, that it’s so lightweight and powers from your device means you can take it anywhere and make music whenever the mood takes you, crucially including monitoring so even when in public, you can do it in private. All of this with the minimum amount of gear. The selection of sounds and software is a great starting point to get you up and running as well.

Pros: Super portable and lightweight. Powers from any device, even a phone. Standalone mode for use with MIDI hardware. All cables included. Good software bundle. Audio out for monitoring or connecting to speakers. Highly versatile. Good keyboard despite small size.

Cons: Fewer controls than its siblings due to portability requirements. No semitone transpose or sustain pedal input.