This small but powerful hardware gate sequencer packs a lot of punch into a small footprint, and even comes in two configurations to suit your rack. Scott Riesterer investigates...

Intellijel’s Steppy is a powerful step sequencer with a small footprint, and possibly the cutest module name out there. Steppy stuffs a ton of functionality into a pint-sized package with a cleverly designed, quick to navigate interface. I’ll apologize in advance for the puns as I walk you through what Steppy has to offer.

Steppy comes in both 3U and Intellijel 1U formats with all of the same features between the two. In my case I bought the 1U version, but I do have experience using the 3U permutation as well. Personally, I think the 1U version is the better way to go if you have the right real estate in your case. The horizontal layout makes more sense intuitively to me for a step sequencer because of my experience using DAWs that lay out time across the X-axis. Since 1U strips are usually at the top or bottom of a case it makes it easier to give Steppy a more accessible footing to interact with the rest of your system. The 1U model has the added benefit of being a little less expensive. 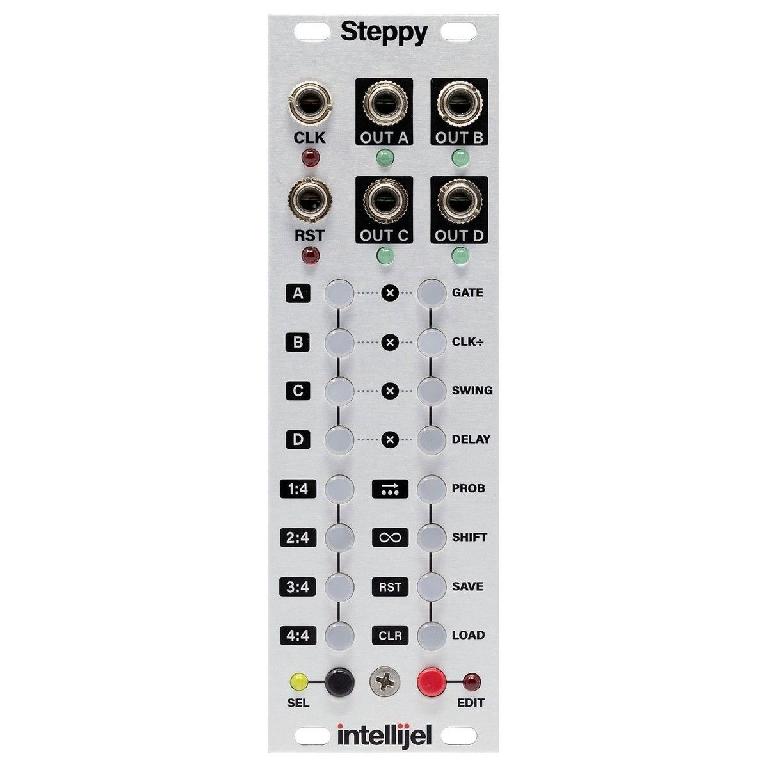 Out Of The Gate

Steppy is strictly a gate sequencer and does not output any CV other than triggers. The obvious use for a gate sequencer is for triggering drum voices, but as is often the case with eurorack, there’s a ton of other potential uses. For instance, my system is more of an effects rig and far from being a drum rack, but I was quick to see the potential Steppy had to offer. For instance, gates can be used to trigger envelopes to modulate all kinds of parameters in your system with synchronization to your main tempo. Opening VCAs, sweeping filter cutoff, creating pitch slides, or any other number of options can provide the framework of your patch, or add additional life.

Separating your gate sequencing from your melodic sequencing can be a powerful means to create complex melodies which a sequencer performing both tasks would never have dreamed of. Gates can be a fantastic way to modulate parameters too. While they only toggle between high and low states, by using them to offset parameters interesting rhythmic effects can be achieved. While using this method, it’s critical to use attenuators or attenuverters on the inputs, then these controls can be performed to alter the amount of offset modulation. Playing around with the length of the gates will also have a big impact on the result.

Another more esoteric way of using gates is to mix them together, then feed them to the CV input of a module. By controlling the level of each gate signal, they can provide different levels of modulation as they stack together. Put the stacked signal through a quantizer and you can even generate melodies! Steppy can also function as a flexible clock divider, or similarly as a sub octave square wave generator. Now that we’ve covered a few uses for gates, let’s take a closer look at what Steppy has to offer. 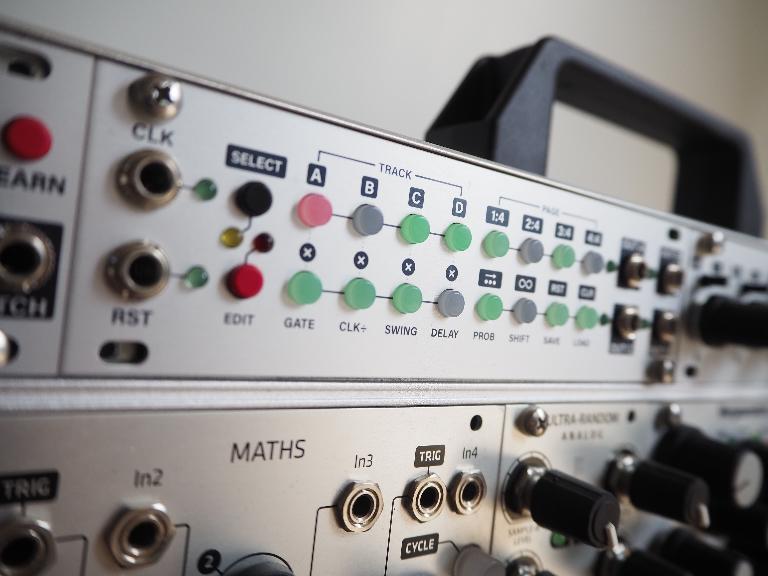 Stepping Up To The Plate

Steppy is a four-track sequencer with 64 steps per track. Tracks can each have different lengths from each other, and can be set to varying divisions of the master clock. Steppy has no internal clock and will only run if an external clock source is connected. This could be an oscillator, another sequencer, or really anything that outputs regular pulse outputs with a rate that you can somehow set. Additionally, Steppy lets you adjust gate length, swing, gate delay, and probability per track, as well as setting ratcheting on individual steps.

Steppy works great in a live performance setting because it’s so quick to navigate, but its Loopy Mode feature is particularly powerful to perform with. With this setting engaged, Steppy will loop playback of all tracks between any steps held down. This could be a single step, or an entire page of the sequence. Once the steps are released, Steppy will resume playback as if playback had never been interrupted, making it easier to keep your sequence in sync with the rest of your patch. Steps outside of the designated pattern length can even be selected for Loopy looping, so you can create fill patterns in unused pages, but I found it fun to create quick fills on the fly just by selecting particular steps, or a series of steps within my pattern.

There’s really not much to the interface of Steppy. It has 16 three-colour LED buttons and two other function buttons. However the implementation of these minimalist controls is really quite clever, along with visual feedback to help ensure you know what’s going on without getting lost. There are two main menus each accessed by their own button and identified with their own colour. The Select menu indicated with yellow LEDs is where you choose tracks and pages, mute tracks, and engage other functions like resetting or clearing the sequence, activating Loopy mode, and toggling Page Follow mode on or off. The red Edit menu is where you can save or load sequences, and set swing, clock division, and gate length and delay. Holding the edit or select buttons lets you access the parameters but exits the menu once you release the button.

It takes a little practice to get the hang of using Steppy, and to learn to identify what all the visual feedback represents. Once you get familiar with it, you can create patterns quite quickly or perform your patterns in an engaging way. With a slim 8HP footprint in the 3U version, Steppy doesn’t take up a lot of room, but it can become a driving force in your system. If you’re looking to add another rhythmic element of control to your rack, you might want to shoehorn Steppy in.

Learn hardware synthesis inside out: https://ask.audio/academy?nleloc=new-releases