Intellijel's Dual Multimode Self-Oscillating VCF and Crossfader has enough sound shaping capacity to keep you coming up with new ideas for quite a while. Scott Riesterer checks out Morgasmatron.

Juicy. That’s the adjective that most often pops into my head when using this filter. In terms of synthesizers, I feel that filters are a component whose label inadequately describes the actual result of their function. Sure, it’s accurate. Filters are indeed filtering out frequencies to shape the tone of a sound. But with a filter like Morgasmatron in particular, the ability to completely transform your source material by adjusting a few controls feels like something a lot more exciting than mere filtering is taking place. And as the name suggests, this filter does indeed offer more than the average filter.

Morgasmatron is actually the third iteration of what was originally dubbed the Corgasmatron. The sequel came in the form of the Korgasmatron II and Expander. The original concept of a filter inspired by the Korg MS-20 has stayed the same, but the filter has been honed through each generation with more flexibility, quality, and another 4HP. It’s often erroneously thought to be a direct clone of the MS-20, but it actually uses a completely different circuit design which gives it a unique sound along with a few additional tools in its arsenal. 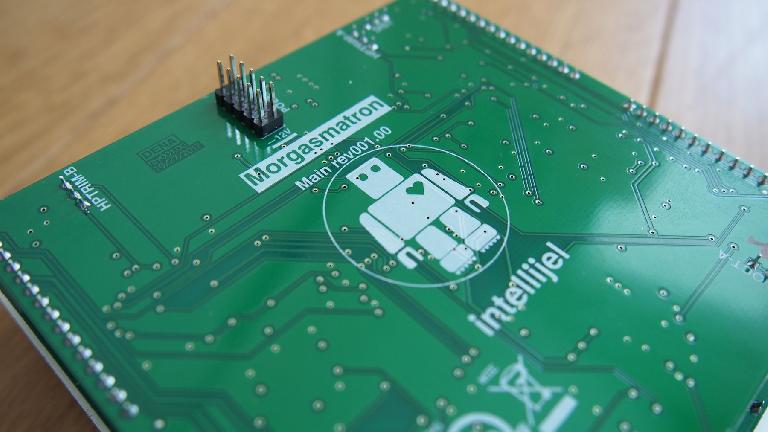 For starters, like the MS-20, Morgasmatron is made up of two filters. But instead of being fixed as a high pass and low pass filter, Morgasmatron’s filters can each be set to high pass, low pass, band pass, or band reject (also known as notch). Additionally, the high and low pass filters can be set to either one or two pole slopes, depending on whether you want a more drastic or smooth filtering.

One core facet of the Intellijel filter’s design has always been the ability to easily toggle between serial and parallel modes. With the flick of a switch you can choose whether filter A feeds into filter B, or if both filters simultaneously receive the input of filter A. The other main design feature through its three-part lineage is the crossfading capabilities of the mix output. Each filter has a dedicated output, but there is also a mix output with a CV crossfader control. This means that you can sweep from one filter to another either with a knob or an LFO, but it also means that you can split a source signal to three destinations. Off to a good start! 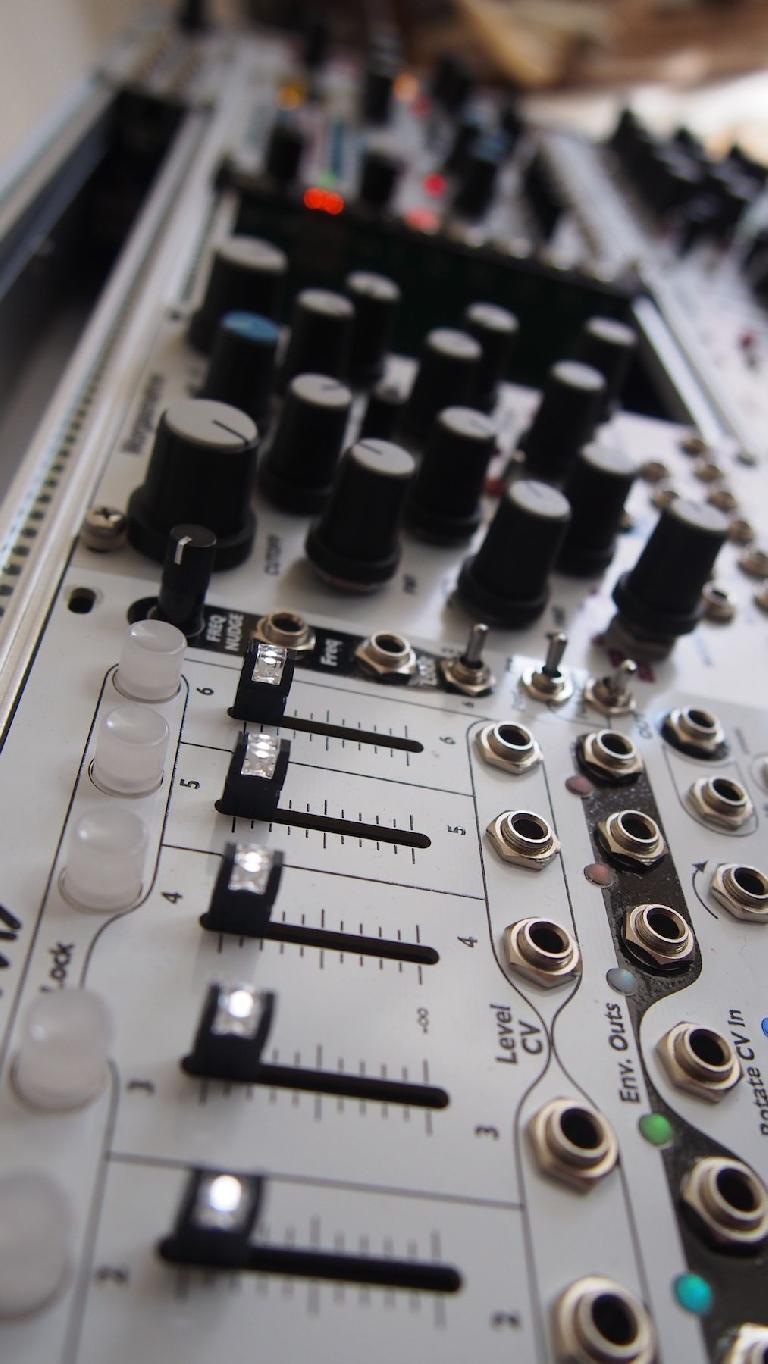 The last common key feature is the concept of Q-Drive. With the original MS-20, the resonance could only reach its maximum value if the input signal was low. As the input signal increased it would actually drown out the resonance of the filter. Intellijel’s design adds a drive control to the resonance circuit which allows the resonance to stay strong and prominent even with higher input volumes. It also means that if the resonance is high enough to make the filter self-oscillate, the drive control will actually saturate and clip the waveform causing it to take on a more square shape with additional harmonics. Usually self-oscillating filters are only able to produce sine waves, but Q-Drive gives Morgasmatron a wider pallette 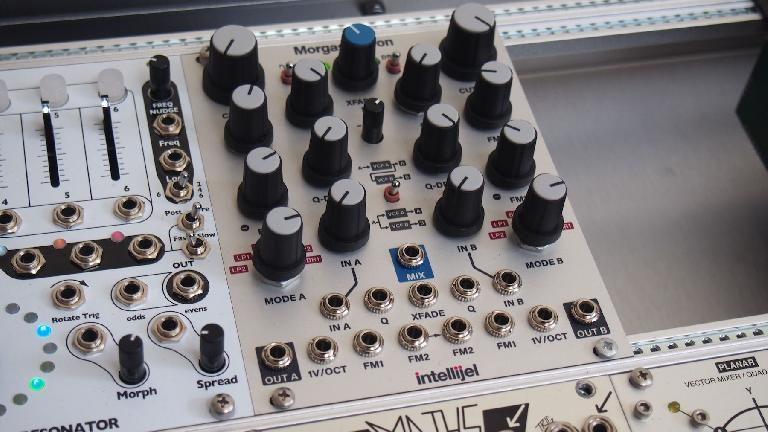 Now we can move on to what’s new in this update, which largely relates to the four switches at the top of the panel. The biggest change comes in the form of the overdrive distortion switch for filter A. This distortion circuit was modelled after the Pro Co Rat guitar pedal which has been a favourite for both synthesizers and guitars since the eighties. Instead of a distortion toggle, filter B has a phase inversion switch to flip the input signal upside down. This sounds less exciting than distortion until you realize that it opens up the possibility of performing ring mod effects. Lastly, both filters also feature a dry switch to bypass the filter from the mix output.

The panel on this most recent version has been rearranged from its predecessors, and I find it much more intuitive and easy to follow. Besides the flexible filter arrangement options, the module has been set up with some intelligent normalling to minimize necessary patching and maximize its ease of use. Each filter has a 1V/Oct input, but the input of A is normalled to the input of B. This lets you quickly set it up as a dual oscillator, either with unison or offset interval tuning.

Similarly the FM2 input of A is normalled to that of B, and these inputs are each controlled by attenuverters so you can have the two filters receive the same modulation signal, but react in opposite directions. Furthermore, you probably noticed that I just mentioned this filter has both an FM2 and a 1V/Oct input for each filter. If you like modulating your filter, Morgasmatron will definitely not disappoint. It’s pretty easy to get used to having plentiful modulation inputs, which makes using more simple filters quickly feel restrictive. I guess I’m probably spoiled, because if a filter only has a single cutoff modulation input it’s hard not to be disappointed now. The only thing that is arguably lacking is an attenuator for the Q CV input. This was obviously nixed in favour of keeping the panel nicely arranged without being crowded or resorting to finicky little knobs. 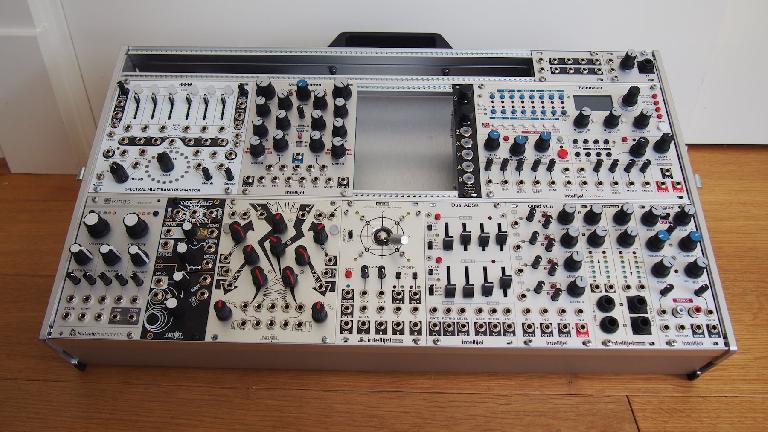 The benefit of a design that has been refined over years of customer use and three generations of development is obvious and plain to see. Intellijel was able to take an already successful, well loved product and make it even better. Morgasmatron is able to be smooth and gentle, or gritty, crunchy and howling. The controls make it a joy to use, and the plenitude of modulation inputs almost ensure you’ll encounter happy accidents. Even a static source can come to life with just an LFO and an envelope using the crossfading capabilities. If you’re looking for a flagship filter for your system, Morgasmatron is definitely worth considering.

Another static square wave, but this time with distortion.

I guess I was still in the generative music frame of mind after last month’s article, so I made a few Krell style patches using Morgasmatron.

Learn modular synthesis inside out in the Ask.Audio Academy: https://ask.audio/academy?nleloc=category/audio/topic/eurorackmodular