While the influence of Donald Buchla’s innovations on the eurorack world is widely present, it is probably most apparent in modules inspired by his 259 design, the Complex Waveform Generator. The basic concept of the 259 is that you have two oscillators that interact with each other to produce more complex waveforms. For this reason they are sometimes called Complex Oscillators, or Dual Primary Oscillators. In the case of the Cš-L, it pays homage to the 259 with some clever original touches, and packs all that complexity into a smaller footprint than most alternatives. So let’s see if we can break down some of this complexity into something digestible.

The first thing that really stands out about the Cš-L is how it looks. The matte black panel with gold detailing makes it look like something straight out of an art deco steampunk universe. The two witch-hat style knobs for the coarse tuning of the oscillators evoke the Buchla inspiration, but they’re also fun to use and offer precision control. The waveform outputs are all along the right hand side of the panel, and the inputs are arranged amongst the controls. I’ll admit that with things patched up the module can feel a little crowded, but as I’ll explain below you can accomplish a lot without patching anything by taking advantage of the various internal modulation routing options. 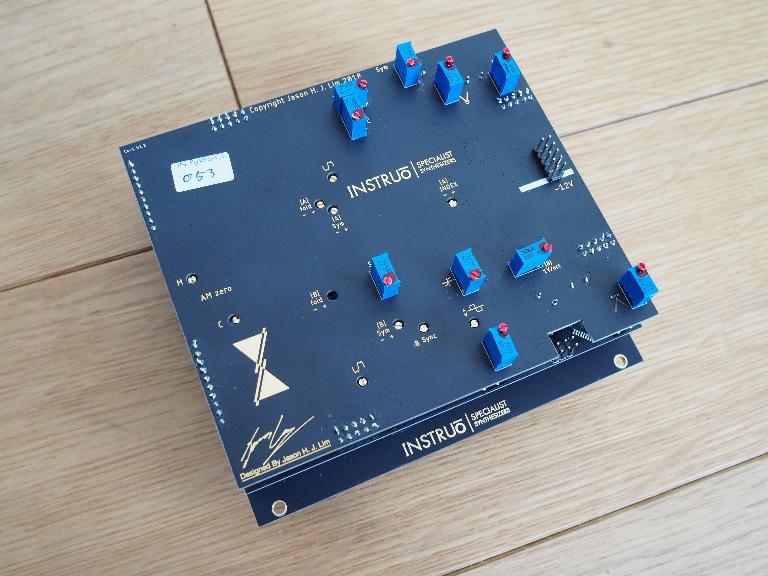 The Cš-L is made up of two oscillators arranged from left to right, with one on top of the other. Each has coarse and fine tuning controls, 1V/OCT pitch input, sync input, a wavefolding slider with an attenuverter for incoming CV, a bias attenuverter for the wavefolder, a knob for pulse width modulation, and a frequency modulation input and attenuator with switches to toggle between linear or exponential responses. Regarding PWM, the top oscillator uses a standard pulse wave, while the bottom has what Instruo calls a double pulse, which looks a little like a stepped sine wave.

The top oscillator is a sawtooth core with a toggle button to drop it down into LFO range, while the bottom oscillator is an audio-rate only triangle core. This is significant because sawtooth core oscillators are known to respond better to being sync'ed, while triangle cores are more accurate with pitch tracking. In the case of the Cš-L, you have your options covered. The two oscillators have a shared modulation index control with an attenuverter along with a knob to control the depth of amplitude modulation sent to the MULTIPLY output. While the oscillators each have their own 1V/OCT inputs, the LINK button allows them to share either input and track pitch in tandem. That was a lot of words and jargon, but now that we have the panel features out of the way we can move onto the fun stuff.

While most dual complex oscillators have a clear relationship between carrier and modulator, the Cš-L is able to blur the lines. By default, the sine wave output of each oscillator is normalled to the FM input of the other oscillator, making it easy to create wild cross modulation. Then using the Index control you can tame this wildness to taste, for example by shaping it into percussive plucks. What’s not obvious from a quick glance at the panel is the fact that this is just one of the options available for the internal modulation bus. When you press and hold the button next to the INDEX controls, the other buttons on the panel can now be toggled to activate the various modulation routing options for each oscillator.

These always use the sine wave output of the opposite oscillator, and include standard frequency modulation, wavefold depth, and symmetry bias modulation. With any or all of these modulation routings enabled, you can use the INDEX controls to determine the depth of modulation. This lets you quickly sweep between a stable tone and complete chaos. Activating the oscillators to modulate pulse width can be done separately by toggling the top PWM MOD button through three settings. Since there was only a video manual available while I wrote this article, I grabbed a couple screenshots of the modulation routing button assignments for more convenient reference because unfortunately they are not indicated on the panel. 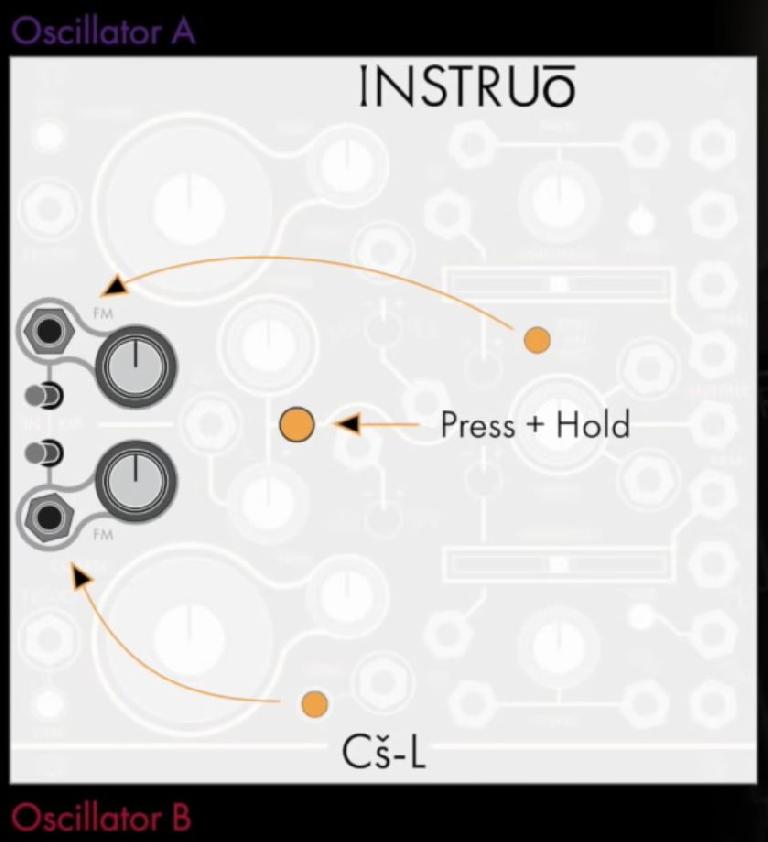 These buttons activate FM modulation via the INDEX control for each oscillator. 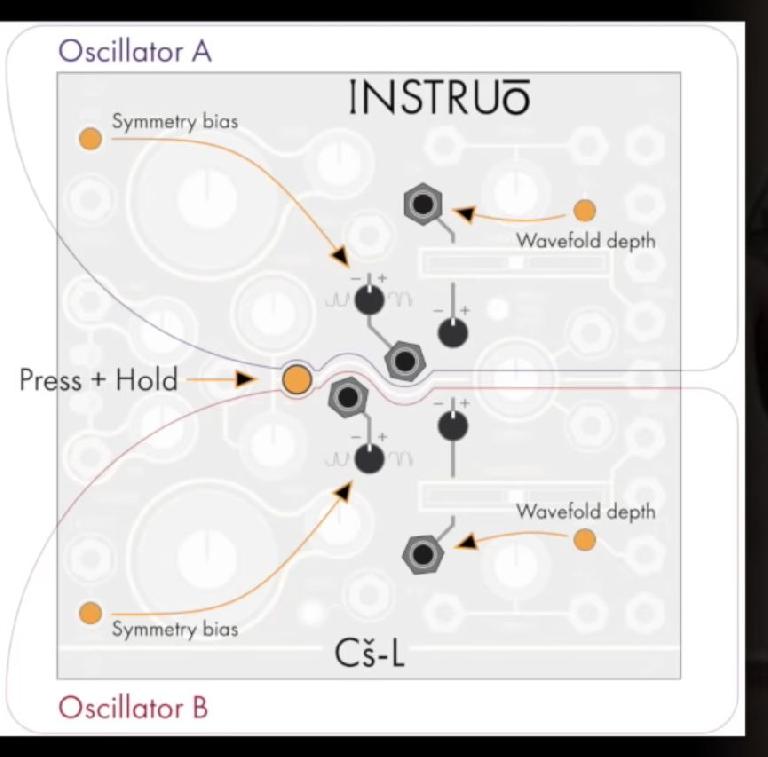 These buttons activate the other modulation routing options.

The wavefolding sliders control the depth of wavefolding, but also act as a VCA. While they are set to the left, the output is silent. As you sweep it right it begins as a simple sine wave before becoming more harmonically rich as the waveform is folded into more complex shapes. The symmetry of this wavefolding is controlled by a separate input and attenuverter. Between these two controls alone you can create a wide range of timbres. I found that because these controls are so sensitive, a little bit of modulation goes a long way. It helps to use an attenuator to keep things a little more subtle. It would have been nice if the LEDs on the wavefolder sliders indicated the depth of wavefolding, especially while being modulated.

The sine outputs of each oscillator also feed the ring mod section of the module, and the result is sent to the MULTIPLY output via the depth control. Three flavours of ring mod are available by toggling the button above the DEPTH control. The first is standard amplitude modulation ring mod, the second outputs only positive voltages, and the third rectifies negative voltages to be positive. External inputs are available for the ring mod section so you can feed it other waveforms from Cš-L or completely separate signals.

As I mentioned above, each oscillator has a SYNC input to reset the start of the waveform. The top oscillator defaults to use hard sync while the bottom uses soft sync. Soft sync changes the direction of the waveform rather than simply starting a new cycle. Additionally, the SYNC button can be used on the bottom oscillator to toggle two additional options. While lit amber, oscillator two soft syncs to the cycle of oscillator one. When lit white, hard sync'ing is activated. This sync'ing method uses the SUB oscillator as a clock source, and since the sub oscillator can be toggled between three different octave settings, you can change the timing or pitch of the synched result. Sync'ing the two oscillators makes it much easier to find harmonically related musical sweet spots while tuning the two oscillators.

While all these features are admittedly quite complex, understanding them is by no means necessary to have fun making musical or noisy tones with the Cš-L. There’s a lot of features here, but they’re very well thought-out and arranged in a fairly intuitive layout. Most importantly, it’s really fun to use and explore. I found it really easy to get carried away with exploring how much I could transform a tone. It’s easy to get lost with this module, but in a really good way. 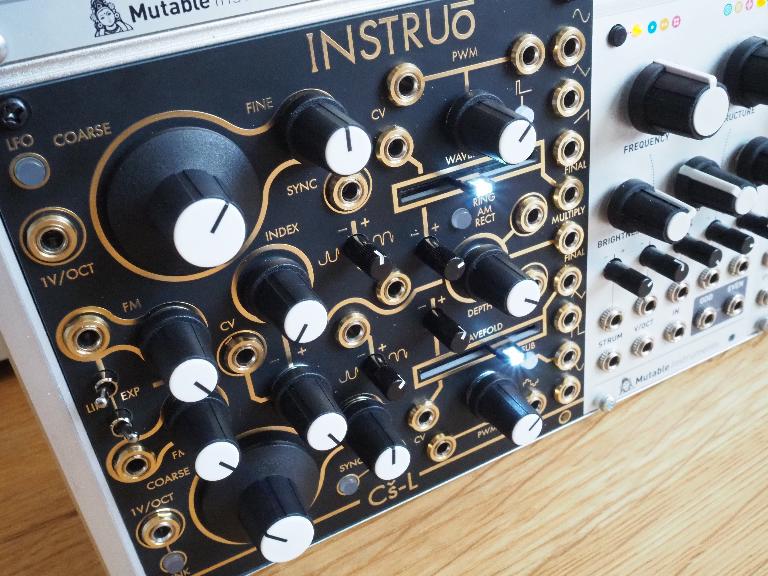 Cons: Modulation routing options are not indicated on the panel; Inputs and controls can be a little crowded;

Learn how to use eurorack systems: https://ask.audio/academy?nleloc=category/audio/topic/eurorackmodular