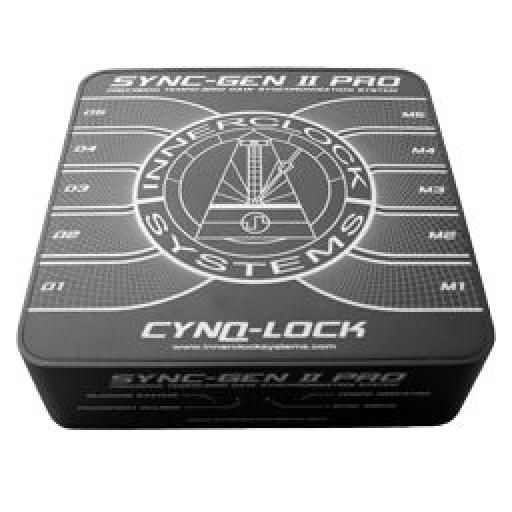 Language
Despite wanting to mix totally in the box, many musicians rely on much loved MIDI hardware'¦ but how to keep everything in sync with your DAW? Enter Innerclock System Sync-Gen II Pro. Rory keeps time.

Electronic musicians have always enjoyed the mix of software and hardware instruments. The DAW is so powerful these days that entire albums can be made and mastered on a single computer, but the pleasure of playing a real instrument is something that a DAW cannot fully emulate. And so studios around the globe mix the latest software hosts and instruments with hardware sequencers, synthesizers and drum machines. The tricky part is getting them all to play nicely together. If this sounds all too familiar to you, then read on...

Back in the early 1990s, electronic musicians mostly used the Atari ST computer for sequencing and life was good. The Atari had MIDI ports which were connected directly to the motherboard, which meant solid timing and low latency. The computer and its connected instruments synced up beautifully.

Eventually the PC and Mac superseded the Atari ST. The PC was more powerful and musicians were tempted by infinite tracks of audio recording, virtual instruments and all the other non-music related stuff that PCs did so well. One of the downsides of PCs is that MIDI was no longer built in. MIDI interfaces had to be bought separately and were connected via serial ports and eventually USB and Firewire. This had a detrimental effect on MIDI timing and latency. With all the other things the computer was doing, MIDI timing was no longer such a priority in the system. This wasn't the fault of software engineers, but more a limitation of the hardware itself.

This problem of MIDI timing remains to this day. Regardless of how good the DAW software and hardware MIDI interface are, MIDI timing is still subject to the jitter and latency introduced by the PC/Mac hardware. If you have ever tried to sync a drum machine or sequencer to MIDI clock coming from your DAW, it's very possible you will have been frustrated by the results. At worst the timing is awful, but sometimes clock jitter and latency can leave a feeling that something “isn't quite right”. 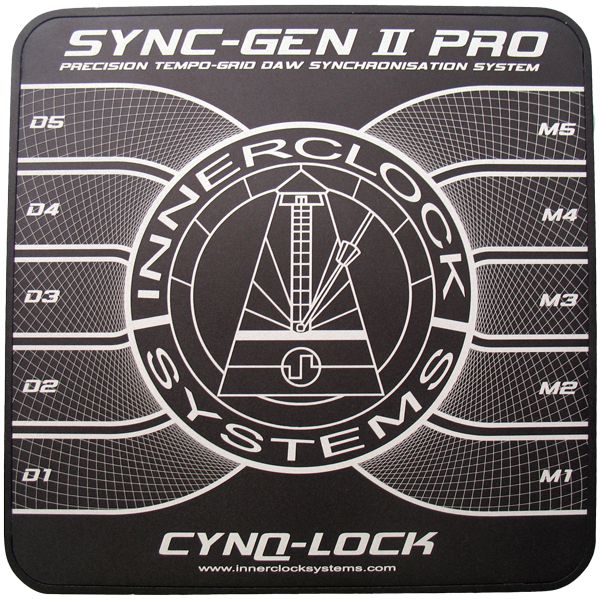 The Sync-Gen II Pro is a handsome looking box.

Innerclock's solution is simple: remove the job of generating MIDI clock from the computer to a dedicated box. The Sync-Gen II Pro is a rather beautiful item. It has two audio inputs, a footswitch input, a trigger output, 5 MIDI outputs and 5 DIN sync outputs (DIN sync is an older sync standard used by Roland in the 1980s). The audio inputs receive pulses created by the Sync-Gen II software plugin running in your DAW and these pulses are converted instantly to MIDI clock and DIN sync. Because DAW audio is sample accurate, this means you get sample accurate conversion to MIDI clock.

With this sample accurate clock the 5 MIDI and 5 DIN sync ports can be used to accurately sync any hardware which uses these protocols. 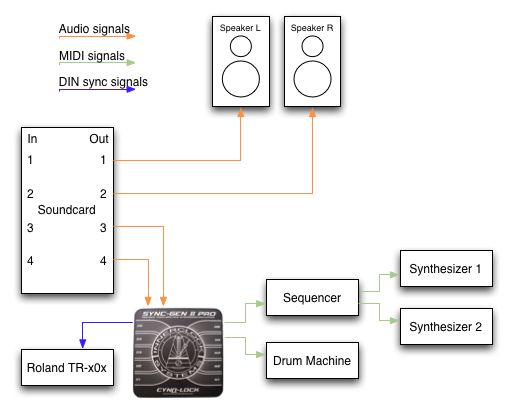 A typical setup. Notice all MIDI clock signals are now generated by the Sync-Gen II Pro, not a soundcard or MIDI interface.

Innerclock's Sync-Gen II software comes in VST, AU and RTAS plugin format on Mac and PC and is included in the price of the unit. The software not only sends the sync pulses to the hardware box but also cleverly deals with start/stop messages, so all your hardware will start and stop along with the transport on your DAW host.

The basic function of syncing your hardware to your DAW with 100% reliability would probably be enough for most, but the Sync-Gen II software goes further, allowing several more useful functions:

When you first receive the Sync-Gen II Pro, the setup is surprisingly minimal:

You can be up and running in 20 minutes or less. Sometimes the signal level of the plugin might need adjustment depending on your soundcard. Mine works best with a +6db boost. 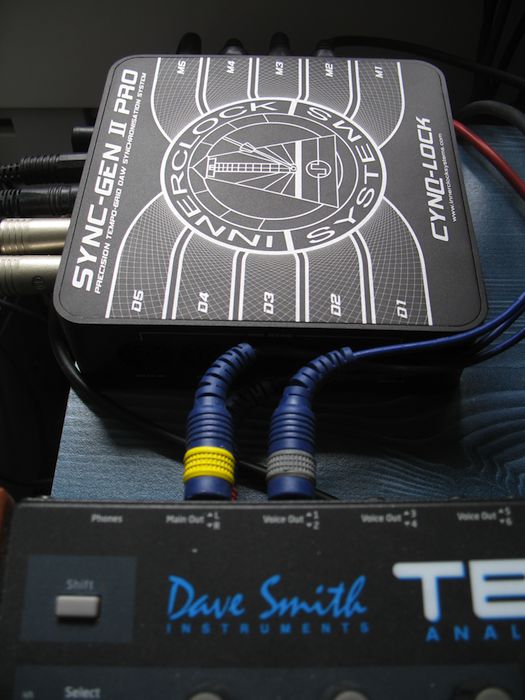 The Sync-Gen II Pro quietly doing its job in my studio.

During the first session with the Sync-Gen, I was grinning from ear to ear. It's not that MIDI sync from Mac and PCs doesn't work. It does, but there's often this feeling that something isn't quite right. With the the Sync-Gen II Pro, drum machines, sequencers and synths suddenly sound tight and musical. Everything just “locks in”. I found myself hands in prayer position saying “Thank you Innerclock!”.

Being a fan of hardware instruments, and someone who spent years frustrated by the lack of musical satisfaction syncing hardware to software, the Sync-Gen Pro II has become indispensable in my setup. It's not a cheap solution, but when I think that I will never again have to tear out my hair trying to sync two worlds together, it suddenly seems like money very well spent.