Language
IK Multimedia's Lurssen Mastering for Mac/PC and for iPad looks to lower the difficulty level for producers who want to master their tracks in their own studios. Has mastering audio ever been easier?

With so many digital instruments and effects on the market, the last few years have seen some developers look to create tools that go beyond just being “a great compressor” or “a stellar EQ”. Sometimes this takes the form of modelling a real piece of hardware that’s either rare, expensive or impossible to get hold of, and in other cases it means working with musicians and producers to recreate their unique hardware setups using software.

That’s the case here, IK having worked together with Grammy Award-winning, LA-based mastering engineers Gavin Lurssen and Reuben Cohen to bring their philosophy and sound to your Mac or PC—or indeed to your iPad if you opt for the iPad version. A bit like when Waves does “signature series” effects with producers, the focus here is on the sound rather than giving you access to every bit of virtual hardware involved. That’s quite an appropriate way to approach a mastering app, since mastering is about working and focusing on one stereo file at a time.

You might think that the Lurssen Mastering application (it also runs as a plug-in inside your DAW) bears more than a passing resemblance to T-RackS, IK’s venerable mastering software. And the single window interface is indeed similar in design. It strives to keep things simple however, unlike the rather more complex and involved Ozone from iZotope. 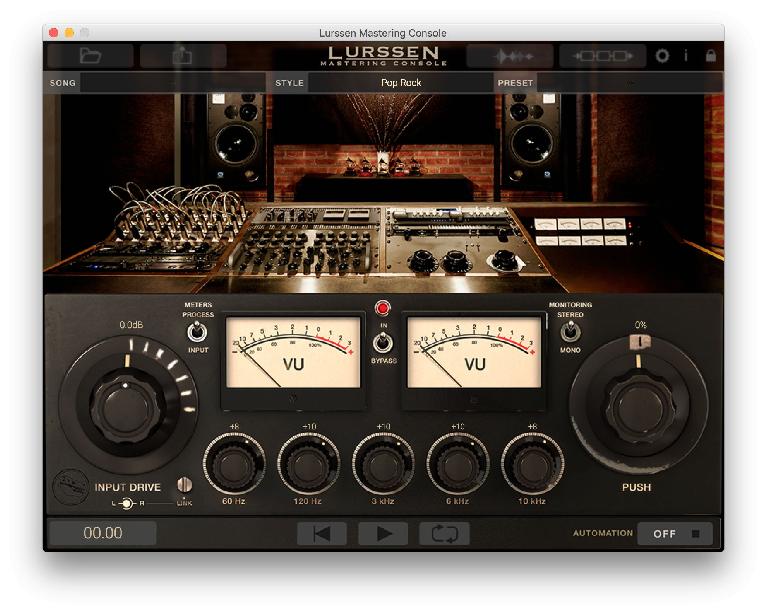 The one-window interface is friendly to use

Drop a mixed down audio file into the app and you can choose from the bundled, genre-based presets to get started. You may initially be puzzled by the apparent simplicity of the control set but this is actually not uncommon in hardware mastering studios. The complex wiring is done behind the scenes and the engineer actually operates just a few controls—some dials and knobs—to master the track. Unlike mixdown, you’re not endlessly tweaking every component track in a project when you master; you’re dealing with the stereo signal as a whole. Interestingly, some presets “lock” certain parameters when loaded, because as Lurssen himself states, “once set, we don’t change those settings”. So in essence you really are getting mastering setups as the man himself would use them.

Modelled on the actual studio, you get three main control sections. The Drive knob to the left lets you drive the input signal to make it hotter. The five EQ knobs in the centre let you cut or boost five frequency bands and the Push knob to the right lets you raise or lower the EQ knobs by the same amount all at the same time, in order to “ride” changes across a track. The EQ knobs can be set wherever you like and the Push knob will adjust them all by the same amount from their relative positions. You can monitor in mono or stereo and bypass the whole effect which is good for A/B comparisons. 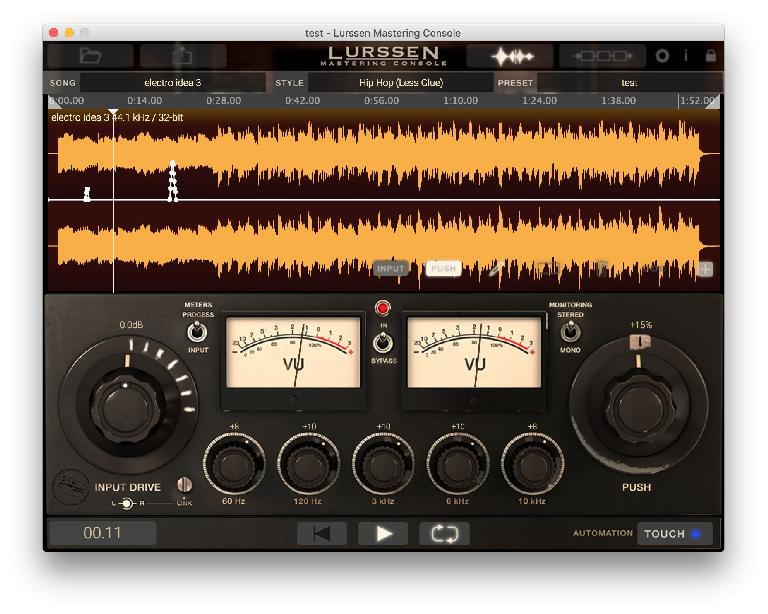 The waveform view lets you access some automation data

The app supports limited automation of the Drive and Push knobs, even when running in standalone mode and you can view and edit this data in the waveform section. I’m not sure quite what the idea is here: it’s useful for making subtle tweaks to volume and intensity over the course of a track, but I always assume the goal of mastering to be creating a consistent level, not one that changes. Automating EQ could potentially be more useful, though it’s not available. In plug-in mode, some of the dynamics processors can also be automated using your host’s system.

If you go into signal chain view, you can see what modules are currently loaded and in what order. In line with the philosophy that you’re getting a professional’s setups, there’s limited scope to edit these though you can tweak the de-esser and compressor modules to an extent. Of course, it’s also possible to save your own presets with unique EQ settings, and there seems to be compatibility between the desktop and iPad versions of the app which is useful for working on the move. 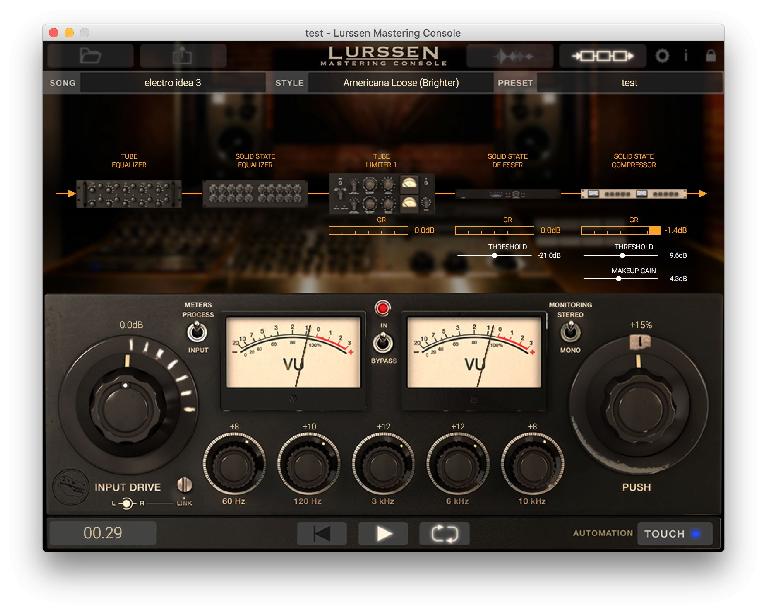 You can tweak some of the modules in the chain, though not all

Like in T-RackS it’s possible to load multiple tracks into the app in standalone mode and then toggle between them, copying and pasting settings if you like. This makes it easier to achieve a consistent sound when mastering several tracks that are going to end up on the same album, for example, or giving different treatments to the same track.  When it comes time to export your finished master, in plug-in mode you simply perform a channel export as normal and in standalone mode you can export one or more tracks at up to 32-bit, 96 kHz resolution. Of course you can save projects too, so your masters remain fluid should you need to come back and tweak them later. It’s rather less messy than opening a whole DAW project with a big chain of plug-ins in the mixer.

The process of mastering is about enhancing what’s already there rather than necessarily having a “signature” sound in the way that a recording engineer or mix engineer might have. Nonetheless it’s crucial to get the setup right, and having a helping hand from true industry leading professionals is always going to be a good thing. Lurssen Mastering Console takes a lot of the guesswork and fiddling out of mastering and comes with a great pedigree. Much of the groundwork is done for you and it’s then up to you to fine-tune the settings. Purists may prefer fine grained control over everything, but there are plenty of options elsewhere for those that do.

The regular price of EUR360 or around $400 seems a little high, to be honest, when the regular price of Ozone 7 is $249 (though the Advanced version is more). Ozone may be a different, more scientific tool for mastering but it’s pretty good and not hugely difficult to learn. Lurssen Mastering Console is easier to pick up for sure, and will feel friendlier especially to less experienced users. It sounds as good as you’d hope, though if you’re looking to dip your toe in the water, the iPad version is a cheaper way to do it even if unlocking its full functionality will still cost you $100.

Pros: Very easy to use. Great sound. Takes a lot of the setup and guesswork out of mastering. Limited automation support in standalone mode. Work on several tracks at once.

Cons: Pricey, and has competition. Automation of EQ would be useful.