The famous Leslie speaker that gives the Hammond organ its unique sound has been much-emulated. So what can IK's latest release bring to the party? Hollin Jones finds out.

The Hammond Organ in its various incarnations started life as an instrument found mainly in churches but very quickly, thanks to its incredible sound, became a mainstay of jazz blues, rock and many other styles of music. Half the magic of the Hammond’s sound actually happens not in the organ but in the Leslie speaker - a rotating monster of a thing. If you’ve ever stood next to a real one, you won’t forget its sheer size or the realisation that inside the cabinet that thing is actually spinning around.

IK has teamed up with Hammond USA and Suzuki Music Corp of Japan to faithfully model and recreate a number of Leslie speakers with this collection. Although perfect for organs, the Leslie effect can work well on vocals, guitars and other sources so this isn’t necessarily just one for the drawbar-fiddlers. They are available as add-ons for AmpliTube CS, T-Racks CS or in a discounted package for both. They also run as individual plug-ins inside your DAW, but you’ll still need one of those apps installed. There is a demo version available for you to try.

IK has clearly gone to a lot of trouble with this collection, and there’s a huge amount of detail on the product page about how they did it. I’ll not repeat all that here but rather give you my impressions of the sound and design. There are 11 officially certified Leslie models consisting of 5 Amps (Leslie 147, 122 vintage; Leslie 122A - brand new tube; Leslie 3300w new hybrid and Leslie G-37/Studio 12 brand new hybrid) and 6 rotary-speaker cabinets (Leslie 147, 122, 122A; Leslie 3300w, Leslie G-37, Leslie Studio 12). The company’s Dynamic Interaction Modeling technology has been used to capture the many nuances of the system’s behaviour.

As you’d expect, mic placement is possible and you can move the virtual mics for different results, as well as combining amps and cabs in any way you like. The cabs work in stereo for both the horns (the top end) and the drum (the mids and bass end) and there’s an onboard EQ section, a mixer and a gorgeous look and feel to the suite generally.

One control that’s fairly unique to rotary effects is the speed controls, and these can be found in the Setup section. You can set the slow and fast speeds of the horn and drum as well as the acceleration and deceleration speeds - how quickly they move from one speed to the other. You can throw a lever inside the plugin to change these, but more expressive players will want to connect a variable MIDI pedal (an expression pedal perhaps) in order not only to be able to do this with their foot, but also to set speeds anywhere between the fast and slow values. A crucial part of Hammond playing, this can be done in a DAW by using MIDI learn to connect the pedal to the parameters. It can also be done in AmpliTube using MIDI learn and in T-RackS while running in plug-in mode, though not when in standalone mode since that mode doesn’t support MIDI. 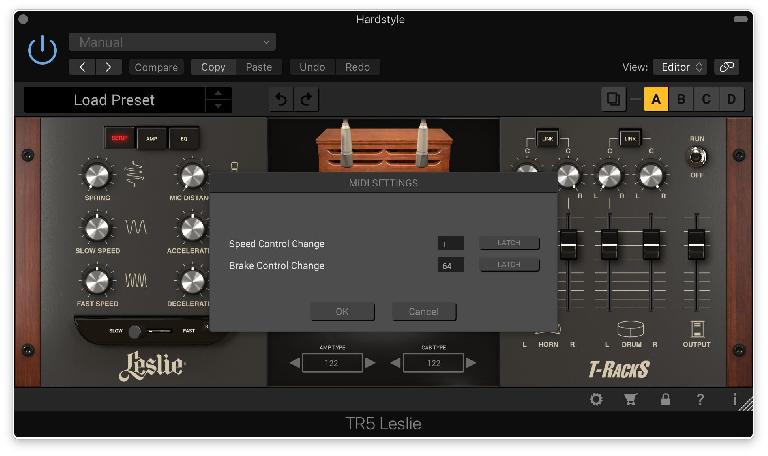 The Leslie effects sound amazing - naturally, on Hammond they are at their most recognisable. They swirl and bite, faithfully capturing the soul and grit of that classic rotary speaker effect. Hugely customisable, it’s easy to tweak and tailor the sound, moving mics, swapping modules and mixing as you go. When working in a DAW, realtime parameter changes are easy enough to program using automation. If playing live, you’ll want the Amplitube version so you can assign physical pedals to the various rotary speed controls and change these in realtime.
Ultimately this is a great-sounding collection of Leslie effects that will really elevate your Hammond sound - and other sources too - to the next level.

Pros: Incredible Hammond sounds. Process any number of sources not just organs. Gorgeous look and feel. Hugely tweakable. EQ, mic placement and mixer onboard. Go beyond the versatility of the original with extra features like stereo. Run as plug-ins inside your DAW.

Cons: You may be happy with your current virtual Hammond’s sound. No MIDI support in the T-RackS standalone version for connecting pedals to control rotary speed.