IK's latest hardware unit is an iOS and desktop-compatible stompbox solution - but it's also much more than that, as Matt Vanacoro found out.

Nobody is happier than me that IK Multimedia is ‘building out’ their iRig line into a professional environment of audio interfaces. They were one of the first companies to offer iOS audio interfaces that didn’t rely on the janky headphone jack, and all of the iRig products have always offered some convenient features that really showcase that these products are dreamed up by a group of musicians that actually use them. The iRig Stomp I/O is the next entry in the already impressive lineup, and it brings together a host of features that can often be a pain to get up and running. 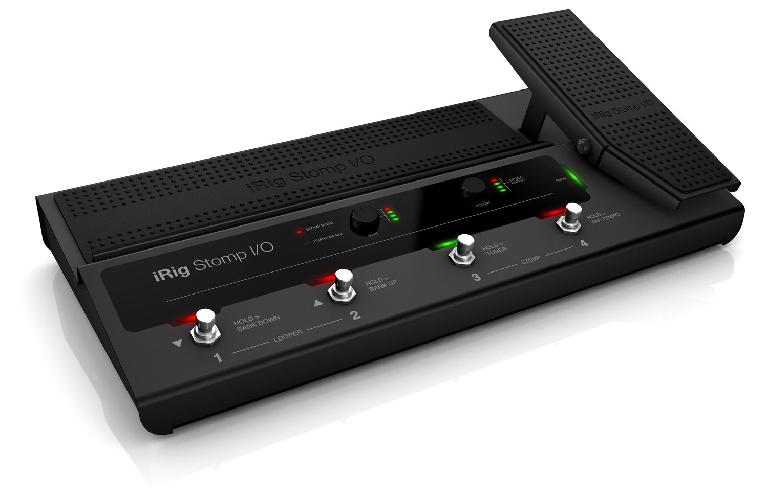 The Stomp I/O is an audio interface that works with both iOS and Mac/PC. You get a single XLR/quarter inch guitar input with switchable 48v phantom power. There is a headphone output, a stereo line output (balanced!), MIDI in/out, 2 external pedal/switch inputs, USB, and Lightning port. There are 4 foot switches with bi-color LEDs, and a built in expression pedal. Audio can shuttle back and forth up to an impressive 24-bit/96kHz. There is a physical gain control for the input, as well as one for the master output. There are also LED volume meters for both input and output. Finally, a ‘device shelf’ holds your phone or tablet in place for you to see while you perform. 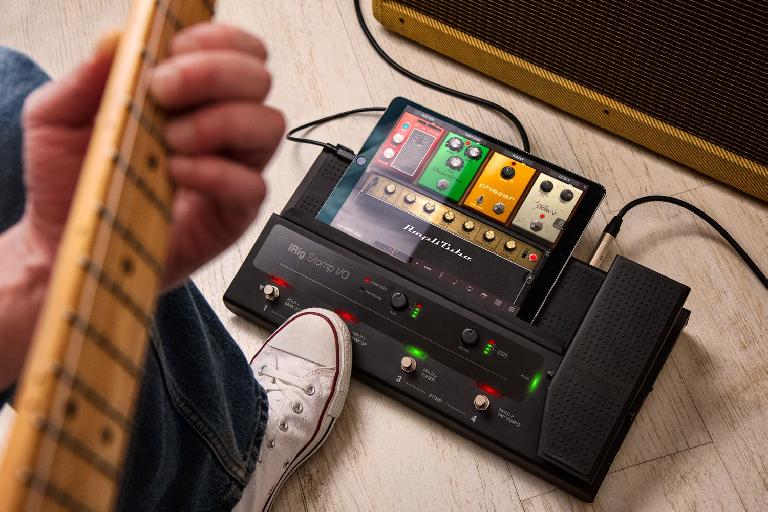 The Stomp I/O itself is built rock solid. It feels hefty, and I’m definitely not afraid to stomp the hell out of it, but it’s not overly heavy. You can power it via DC power supply (in which case it charges your iOS device!) or via USB when using a Mac/PC. In true ‘musician friendly’ fashion, all of the stomp buttons, expression pedals and the like all transmit general MIDI via CC messages - so you are not locked into using any particular app. You get a copy of Amplitube that works great both on iOS and Mac/PC, but you can, of course, upgrade to the full version easily and have more amps and pedals than you could possibly fit in your gear van.

I’m happy to report that the Stomp I/O performed absolutely flawlessly with both iOS devices and on my MacBook Pro. I checked out Amplitube CS for iPad first, and it required zero configuration. In default mode, each of the stomp buttons called up a different preset, the expression pedal could trigger away with a tap, and everything worked as expected. I was able to dial in my gain quickly, and just get to playing. I decided to play around with a keyboard for a bit, so I unplugged my guitar and paired my bluetooth MIDI controller. I called up Syntronik and loaded a Jupiter patch. Syntronik was able to ‘MIDI learn’ the expression pedal on the Stomp I/O and assign it to the filter cutoff without a hitch. Not only is the Stomp I/O my new ‘go to’ tool for guitar playing on my iPad, it just became my main interface for keyboard apps as well.

The Stomp I/O promises to make performing with iOS or Mac/PC easy and reliable; and it delivers on both counts. I now find myself bringing a much smaller rig with just an iPad where I was bringing ‘the kitchen sink’ before, and when I do wind up bringing the MacBook Pro, I now have a much more elegant solution for changing patches and controlling expression/volume. The iRig Stomp I/O gets two very enthusiastic thumbs up from us here at AskAudio.

Cons: I’d love an option to get a longer iOS device cable in the box. The included one works fine, the extension cable is available direct from IK Multimedia, as a separate purchase.