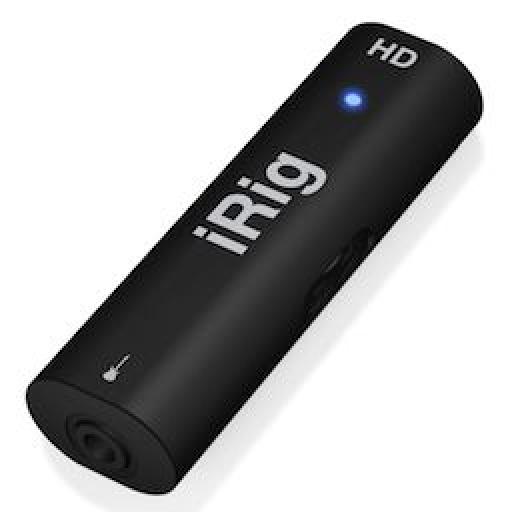 Language
Since it was announced, we've been eagerly waiting to get hands-on with IK Multimedia's iRig HD Guitar interface. Now it's here, Mike Watkinson wasted no time putting it to the test.

So here it is at last. IK Multimedia have launched an updated version of their iRig guitar interface for iOS devices, cunningly named the iRig HD.

What are the Differences?

Well, there are differences, but they are quite subtle. That dock connector lead – only the iRig HD comes with a cable suitable for lightening connector equipped iOS devices (the iPad 4, iPad Mini and iPhone 5). The Apogee Jam requires you to purchase a connector converter. All supplied leads are short, at about 45 cm, and sit at the iOS device end rather than the guitar end of your cable, and will therefore need securing so the device doesn't flop around when you move. In both cases the supplied leads use a proprietary connector at the interface end. Both fix very firmly with no likelihood of falling out, but only the Apogee locks in place. IK might just have the upper hand here however because their leads have connectors which are also in use on their other products, so now I have a Lightning connector cable for my iRig Keys, albeit quite a short one! Your headphones plug into the OS device itself.

The thumbwheel gain control is slightly easier to access on the Apogee, but that means you're less likely to accidentally change the setting on the iRig HD!

Build quality is very similar, although clever use of rubberized paint-like finish on the iRig HD lends it a more rugged feel. The Jam did suffer from some handling noise in tests at high gain settings (see below), so there might be something to this.

What's most important is Sonic performance. It doesn't matter what color the LED turns on clipping, as long as the device sounds good! Owners of the original iRig will know that, handy though that device is, sound quality is not a feature. With very high background noise, no gain control and a tendency to emphasise microphonic, pick-up generated, feedback howl with high gain guitar amp settings.

Thankfully none of these issues are apparent with the HD. Most importantly however is how it squares up to the Jam.

I tested both devices side-by-side using my trusty Stratocaster and a combination of Amplitube and GarageBand on the iPad. I was careful to turn off the noise gate in the virtual guitar amps so that I could listen to the 'warts-and-all' performance of both interfaces. And the results were interesting, but not conclusively in favor of either one or the other device. Both devices can operate at 44.1 kHz or 48 kHz and convert analog to digital at 24 bit. These figures are almost irrelevant in this case however because both are designed for electric guitar, one of the lowest fidelity sources in the studio, and maybe the only one where distortion is not just tolerated, but encouraged!

The first test I tried was with the gain turned up full on both devices, and a fairly 'clean' amp sound from GarageBand. At first listen this revealed the Jam to be significantly noisier than the iRig HD, but on closer inspection, and a check of the technical specifications in both cases, it turns out that the iRig HD offers 26 dB gain, where the Jam delivers a whopping 40 dB. So it's not surprising that side-by-side and running at full chat, the Jam makes much more noise. Turning the Apogee's gain down to give an equivalent output level to that produced by the iRig HD at maximum gain lowered the noise significantly. With similar output the Jam became as quiet as the iRig HD, although the noise was at a slightly higher frequency level. The iRig HD was of course operating at full gain, which is typically where gain circuits become significantly noisier. With a high gain amp setting in Amplitube, the difference is more pronounced with both devices set to maximum gain – the Jam became even more noticeably noisier, and it also suffered somewhat from handling noise (tapping the Jam with a finger produced a click in the audio signal) – this is not the case with the iRig HD. But once the gain is backed off on the Jam by around 14 dB so that their outputs were similar, the Jam actually became quieter (in terms of noise) than the iRig HD. This will be because the IK device was operating at the top end of its capability, as before.

So why not just turn down the iRig HD then, so it's not operating at the top end of its capability? Well here's the thing. Guitarists are always seeking their holy grail - 'tone' - and what I discovered very quickly was that the extra gain of the Jam was very well matched with my guitar and the preamp settings on the iPad I was using for the test, so the end result was much more satisfactorily 'guitar-like'. Plus I had the option of backing off the gain to reduce noise if required. The lower output of the iRig HD just didn't quite give the tone produced by the Jam, despite its relatively noise-free performance.

And the Winner is...

So which one would I choose? If tone is your ultimate goal, and you are not bothered by the extra noise created at higher output levels (which to be honest is almost unnoticeable when the noise gate is activated) then the Jam pips the iRig HD, if you can forgive the handling noise. But, the iRig HD is slightly cheaper, and is definitely better value for money if you have a lightning connector equipped iOS device.