It’s fairly common now to integrate iOS devices into your live rig as processing tools. Indeed, IK has been at the forefront of developing a range of tools to let you do just that. As the software side of things has seen iPhone and iPad apps become ever more powerful, players have started to demand more flexible hardware accessories to take advantage of that power. Following on from the popular iRig HD, IK now releases the iRig HD 2 with some significant improvements. It’s aimed at guitarists and bassists but actually works with any line-level signal including synths and drum machines. The unit itself is small and lightweight and comes with both Lightning and regular USB cables so it can be used with any recent iPad, iPhone or indeed a Mac or PC—though USB-C isn’t in the box, this currently only affects users of new MacBooks. After registering, you can unlock the full version of Amplitube 4 for iOS and more generously, Amplitube 4 for Mac and PC which otherwise costs around 180 Euro. This means you’re getting a really decent bundle of software to unlock the potential of the interface.

Internally, the unit works at up to 96 kHz which is impressive in a bus-powered unit this small, and has 24-bit A/D conversion for crystal clear sound. There’s a headphone jack with volume control of course, and given the removal of the standard jack on the new iPhone 7 (and the likelihood that Apple will eventually phase it out across all its devices) this means you can use it for regular music listening through higher quality converters than Apple’s own adaptor will probably provide. 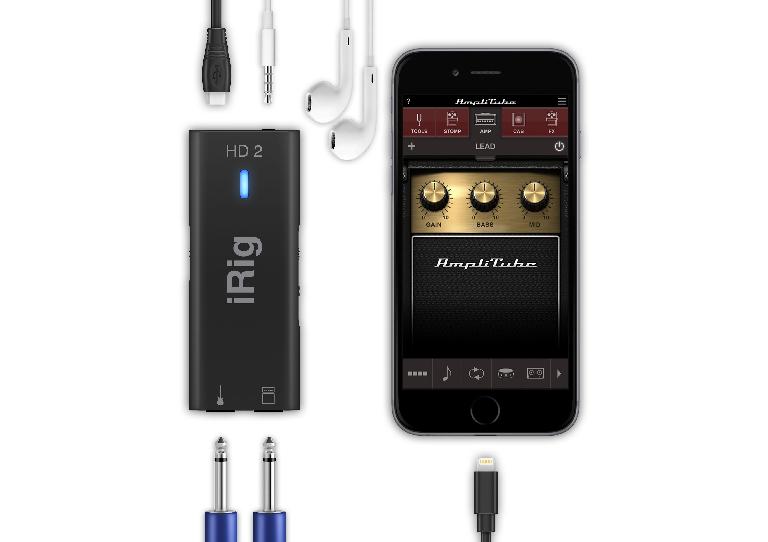 The iRig HD 2 can connect with any recent iPad, iPhone or computer.

You can, of course, connect your guitar or bass, route it through Amplitube or any other compatible app like GarageBand and monitor the results either on headphones or by connecting monitors of some kind. A new feature however is the inclusion of a switchable Amp Out socket, a 1/4 inch jack that sends signal out to your amp. With the switch in the Thru position, clean signal is sent so you can use your own hardware effects, or use a tuner.

In the FX position, the effected signal is sent so you are using your iOS device or computer as the processing rig. Of course there’s nothing to stop you sending the effected signal and using hardware effects too, for maximum processing. The iRig HD 2 comes with a microphone mounting clip and a Velcro strip making it easier to manage when performing live. A small level meter is also provided. 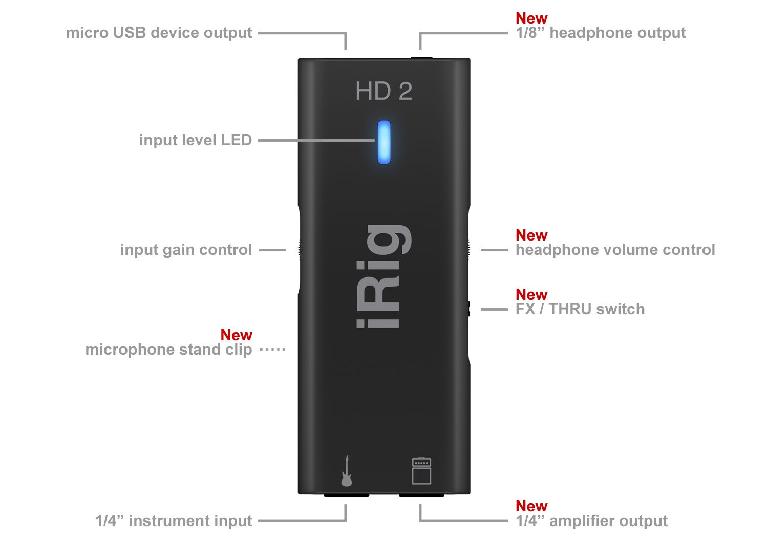 This is a supremely portable and great-sounding little interface with some important new features for integrating your software processors into a live rig. And you can just use it for jamming on headphones too, of course. Bundling Amplitube both for iOS and for the desktop is a nice touch since they are powerful and mature applications and really help to provide a full package. Even if you use another recording or processing app on iOS or your Mac or PC the results are great, so it’s a clever, compact way to record and jam on the move.

Cons: No USB-C cable, though for now this only affects users of new MacBooks.