No studio monitor is inherently flat, but ARC 2.5 can give any speakers a neutral response, plus it has some other tricks up its sleeve. Matthew Loel T. Hepworth gives it a smooth review.

We've all been in the situation where our mixes and masters sound good in the studio but sound radically different when we listen to them on other speakers or headphones. Many factors contribute to that degree of difference, but the main culprit is the frequency response of the studio monitors. Even a monitor with a flat response can sound different from room to room, which requires an engineer to perform a lot of trial-and-error to assess the sonic personality of his or her monitors.

That's where ARC (Advanced Room Control) 2.5 from IK Multimedia comes in. It's a combination of a microphone, sonic measurement software, and plug-ins that make it possible for one to flatten any studio monitor so that it can provide a better idea of what mixes will sound like in the real world.

New in version 2.5 is the inclusion of a MEMS microphone, which is a high-precision transducer to which the ARC software is tuned. (It can use the older IK mics, too.) Rather than include a CD-ROM with the installer, the serial number comes on a card that contains the instructions necessary to download the License Manager for either Mac or PC. Therefore, you'll need internet access to procure the ARC installer. 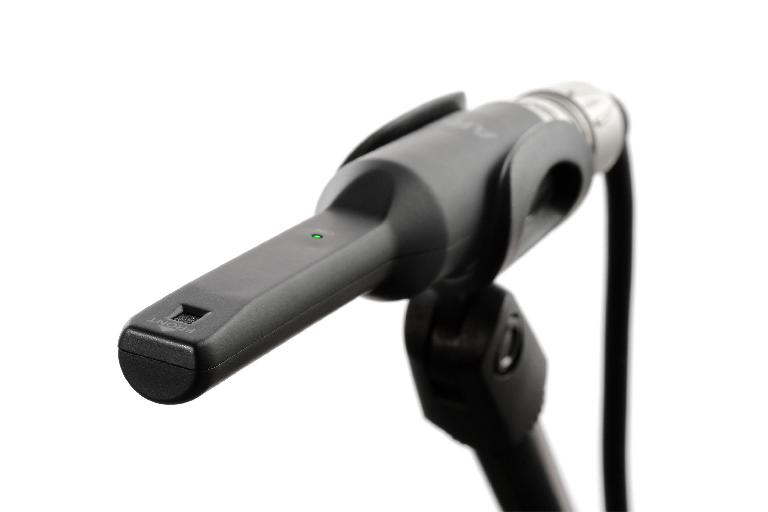 Each ARC license allows you to install and use it on up to 10 different computers. If you have multiple suites in your studio (I have two), you'll almost certainly never need more than one license.

After installing the software, you'll find an application called ARC 2 Measurement. It offers a step-by-step process for taking sonic measurements of your studio monitors in their acoustic environment. One crucial step is to orient the MEMS microphone correctly, which is horizontal — in other words, parallel to the floor — rather than vertically as you would a side-address mic. The tip of the mic is labeled 'Front,' which is the end focused towards the monitors.

The mic connects to your audio interface, and since you'll be pointing it directly at your monitors, make sure to disable any direct monitoring to avoid a feedback loop. The software will guide you through all the necessary steps. I used a mic stand with boom arm to ensure the mic maintained a constant height, which was equidistant to my ears. (In my case, exactly 47" above the floor when I'm sitting in my studio chair.) The mic sounds quite good, so you can even add it to your mic locker when an omnidirectional mic is needed.

Once the software verified the levels both of the mic input and studio monitors, it was time to start taking measurements. That requires you to move the mic to different positions around your studio while the software plays sweep frequencies through the speakers. You can take as few as seven, but more measurements will result in a higher degree of analysis. I also assumed that my physical presence in the room might compromise the accuracy of the measurements, so ducked out of the room during the preset 3-second countdown before the sweeps are initiated. 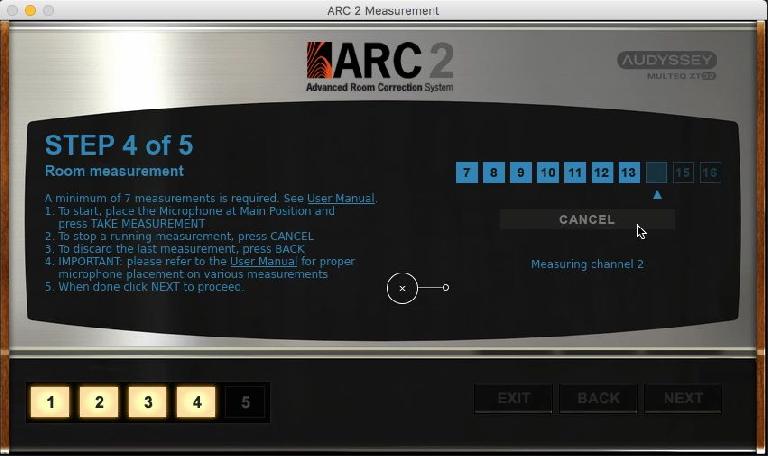 Consulting the PDF manual will help you determine where to place the mic for each measurement. If you usually work alone, I'd recommend the single chair arrangement. But if you have a client couch or other listening positions, you may want to make several room profiles with independent measurements of each. Then you can use one profile when you work with clients, and a different one when you're working alone. I took 14 measurements, and the entire process took about 11 minutes. Lastly, you'll choose from several icons that resemble your monitors, then save the profile to your computer so that the ARC plug-in can load the curve(s).

ARC In Your DAW

The ARC plug-in is compatible with AAX, Audio Units, RTAS, and VST formats. The placement of the plug-in is critical. It should be the very last plug-in through which the signal passed through the final output. (Usually, the master fader, though different DAWs use different nomenclature.) Since I use Cubase and Nuendo, I put ARC in the very last Stereo Out insert slot. However, in WaveLab, I had to go to the plug-in settings and enable ARC to operate in the Playback Processing slots. While it will work in any standard slot, the Playback Processing slots make it so that you won't have to disable the plug-in before rendering. (In most DAWs, you'll need to either remove ARC or power it off prior to rendering so that you don't print your room correction on the final product.)

The plug-in has three windows: Play, Edit, and Monitor. To load your profile, click on the Measurement drop-down on the Play window. You'll see the curve as well as the spiffy icon you chose previously. 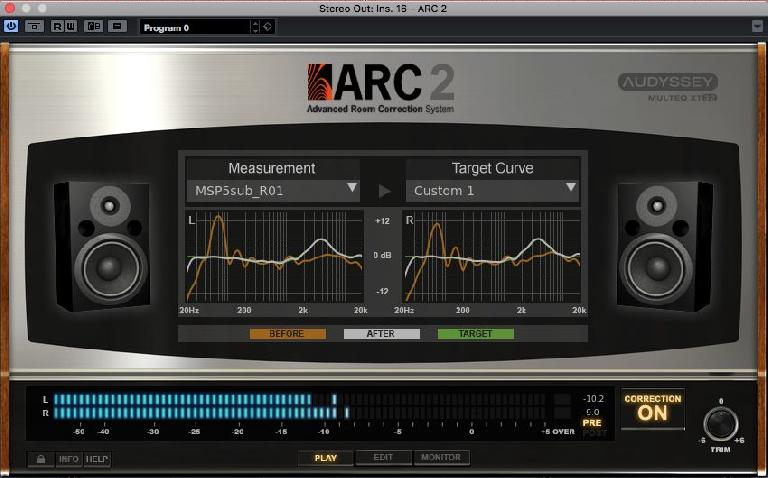 The Play window with my Yamaha MSP5 monitor icons.

The Target Curve allows you to chose from a variety of sonic fingerprints including flat as well as other predefined profiles. (More on that later.) After I loaded my measurement and set the Target Curve to flat, I was astonished by the difference ARC made. The mids were much clearer and pickier, and the low end was profoundly more controlled. The highs were very smooth, and the overall sound was appropriately balanced. (After all, it was flat.)

Now that your speakers are flat, how about your ears? That's where the Edit page allows you to craft up to four custom curves. Because I'm serious about my auditory health, I get regular audiograms. So I grabbed my most recent results and entered the antithesis of the numbers into the Edit window. (My ears have a 6 dB dip at 4kHz, so I put a 6 dB bump at the same frequency.) Programming a custom curve allowed me to hear what I've been missing. It was interesting how bright the results sounded. 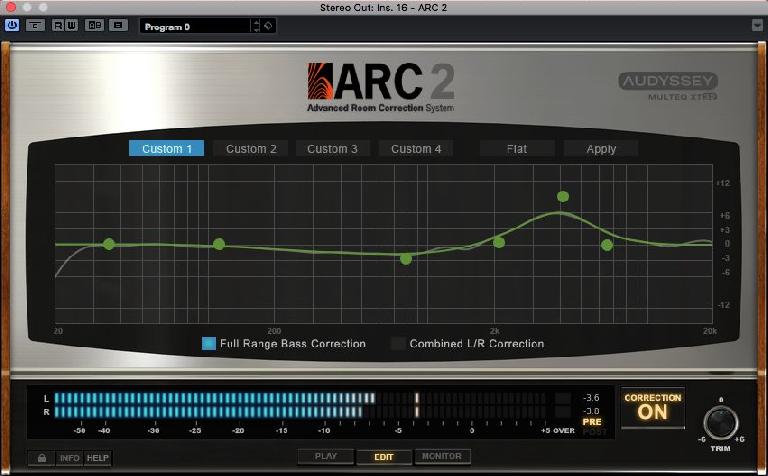 Some DAWs (like Cubase) have great monitor controls. For those that don't, the Monitor window gives you some great options for monitor level, as well as a Dim and Mute buttons, and even mono, stereo, and sides options. There's also a Trim control to adjust the output level delivered to the audio interface. 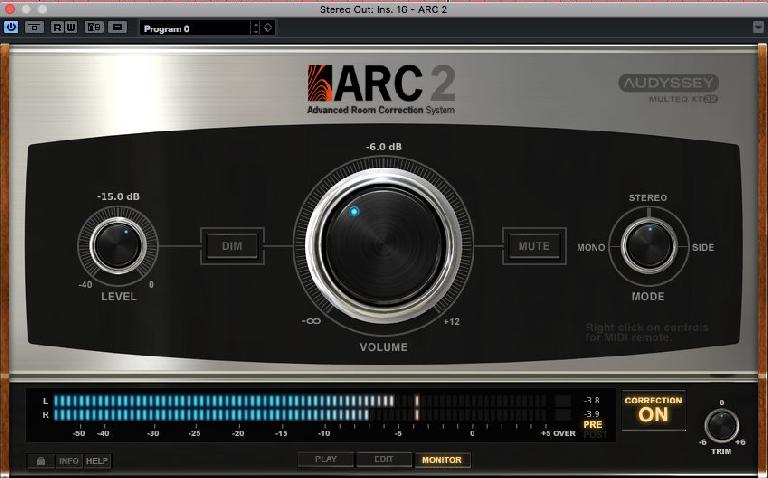 Along with the custom curves, you can also choose from a variety of different speaker emulations. I loved the 80's White curve because it makes your speakers sound exactly like a pair of Yamaha NS-10M monitors. There are also curves for a boom box, car stereo, and TV speakers, among others. Virtual monitoring is a great way to hear what your mix might sound like on a variety of pro monitors and consumer hardware as well.

ARC is a fantastic tool for anyone using pro audio software. It works in virtually any Mac or Windows-based DAW, so regardless of which program you like, ARC will work for you. But it is a plug-in, which means you can't apply corrections to the overall output of the computer. That means you can't listen to iTunes or Spotify through your corrected speakers. There might be a third-party program (like Audio Hijack) that lets you use plug-ins in your computer's core audio system, but ARC won't do it alone. After hearing the difference it made on my monitors, I wanted to use it in all audio programs, not just DAWs and video editors like Premiere Pro.

I didn't fully realize how vital ARC had become to me until I turned it off. When I did, I felt like I wasn't making the most accurate decisions during the mix. It's wonderfully reassuring to know you're working in an environment where your monitors and the room in which you place them aren't lying to you. The plug-in also adds no appreciable latency, meaning you can leave it on in the project from composition through to the final master. And it lets you measure an entire listening environment rather than just the 'sweet spot' where the engineer sits, which gives clients an uncolored representation of the audio. If you've been thinking about upgrading your studio monitors, you may want to try ARC first. It will certainly make your current speakers sound more accurate and neutral. Plus you'll want to correct any new pair of monitors you purchase in the future, too.

Pros: Makes any studio monitor or speaker flat. Custom curves allow you to tune the response to your ears. Virtual monitoring offers the flavor of other speakers through the monitors you already own.

Cons: Works as a plug-in exclusively, so it only functions in pro audio software.

Learn more about mixing and monitoring in the Ask.Audio Academy here.