Language
Never before have we been excited by the arrival of a new music cable! Find out what makes Iconic Sound's LightLead a game changer and something musicians are going to love in our review.

Till now I have to say I've found it pretty hard to get excited about a guitar lead. My thoughts on the matter have always just been get a good one that's properly shielded and isn't going to fall apart in a hurry.

It's sometimes easy to forget just how much of an impact a guitar cable can have on your tone. Some will say that the electrical connection from guitar to amp is integral to the sound you get and that's totally true. Sometimes in a good way, sometimes in a bad way. This is down to the physics of things like impedance, pickup inductance vs. cable capacitance, electrical shielding, grounding issues, etc.

The long and short of it is that the longer (and poorer quality) the cable the more problems you'll get with tone (high frequency loss) and general noise and interference.

So earlier today I was handed a prototype LightLead by David Holmes and Danielle Barnett from Iconic Sound who, in a quest to find a purer way of getting a guitar signal from one place to another, have come up with rather an inventive and radical idea that simply cuts out the middle man. In this case the middle man is the electrical cable! Instead the signal is transferred down a fiber-optic cable via light, completely impervious to interference. And with a twist!

How does it work?

The first question I asked David was, “What's the sample rate?”. The answer I got was somewhat surprising. “It's analog”. Now I'm not sure how this works and I'm tempted to just believe it's some kind of voodoo. Basically there's no digitizing of the signal at all, the voltage is simply converted to light and back to voltage at the other end. All analog! No latency, no A/D D/A, just good old natural stuff like voltage and light!

"I'm tempted to just believe it's some kind of voodoo. No latency, no A/D D/A, just good old natural stuff like voltage and light!"

The lead has a transmitter end that plugs into your instrument. This loads the pickups at 1M Ohm much like a standard amplifier input impedance. This where your guitar circuitry effectively stops; at the output of your guitar. A normal wire cable is just an extension of the circuitry of your guitar which includes the coils of the pickups and makes the whole thing more prone to degradation as it travels farther down the line. A bit like internet speeds on copper wire vs fiber-optic! 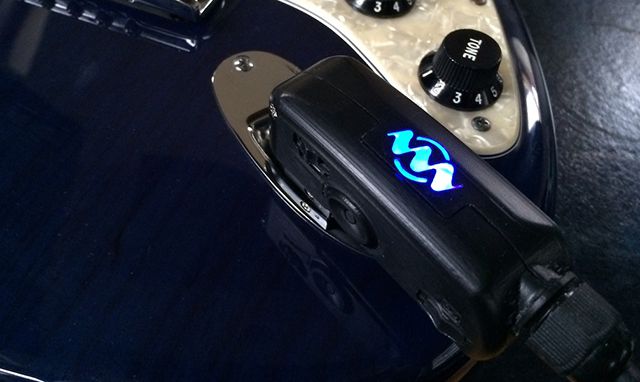 Once the signal is transformed into light it travels down the optical cable and is instantly converted back into voltage by the receiver. This output will feed amp inputs and even Line level inputs with no problem purely based on the fact there are no impedance matching problems as devices aren't physically connected by metal!

The LightLead solves many electrical problems that a convention metal cable brings with it. Probably the most important is the issue of electrical grounding. Since you guitar isn't physically connected to the amp by metal wires (just plastic) you're essentially electrically isolated from your equipment. No shocks! Use a dual amp setup? Say goodbye to any ground loop issues then like nasty hum and potentially hazardous ground lifting!!

There's also the issue of impedance matching. Since there are no loading issues you can effectively DI your guitar output straight into a console line in. Trust me, I tried it and it works! Sounds exactly the same! I was even able to re-amp a signal from Logic from my UA Apollo line out into a guitar amp. Worked a treat! 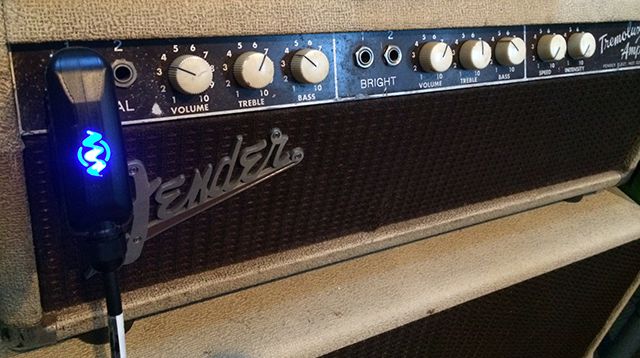 The main problem the LightLead gets rid of is obviously cable capacitance. No more tone sucking from long cable runs from instruments. I hear it's been tested on a 300 ft cable with no issues. Pretty impressive! The phenomena of resonant peaks in frequency caused by different combinations of pickup inductance and cable capacitance would also seem to be out the window too!

It's a bit like soldering your jack socket straight onto your amp!

The LightLead performs just like any other cable. You plug one end into the guitar and the other end into the amp and you're done. The only difference is that what comes out of the LightLead is the 'actual' sound of your pickups without any coloration from cable capacitance or electrical interference straight into the amp. A 'pure' guitar sound!

The lead itself is powered by battery on both ends. The production model will take two AAA batteries to run.

The first thing that struck me was that when the lead was plugged into the amp with no instrument connected that there was virtually no hum that you usually get in this scenario.

Using the LightLead I immediately noticed more frequency response especially in the high end. This was really noticeable on clean sounds both with a real amp and straight into my Apollo to an amp sim. My Telecasters Bare Knuckle pickups sounded even more twangy with a more pleasurable high end sparkle. There is also a marked improvement in transient response. The guitar also seemed to become a lot tighter with distorted sounds and an overall clarity in general. The bass response remains perfectly intact and just becomes more punchy and focused.

Hear it for yourself. Here's a couple of chords DI'ed into my Apollo using a regular 9' cable. This is just the DI sound. Strat on middle pickup:

Quite a difference! Here's both examples through Scuffham Amps S-Gear on a crunchy amp sound in the same order:

The cable actually has a faux 'capacitance' control that will allow you to roll off the high end if the frequency response is too much of a shock for you. It's also important to note the the LightLead does not protect single coil pickups from electrical interference, you still have to live with that.

One of the most marked improvements was when I used the lead on bass guitar. The Fender Precision seemed to become a different bass all together! Like adding a new set of strings!

The Future Of Cables?

The potential applications of this technology are really exciting. It's quite rare that you come across a product that completely turns around something simple like the guitar lead but I think Iconic Sound may have just done that!

At the moment the LightLead is in the prototype phase and looks like it will go to crowdsourcing to raise the money to put it into production hopefully at some point in the near future. The prototype is quite large but will see a reduction in size by about half by the time it's released. Saying that it fits into a Strat nicely and even an Ibanez S-Series with no trouble. Retail price? Can't say at the moment. I guess it will depend on the numbers manufactured.

"It's quite rare that you come across a product that completely turns around something simple like the guitar lead."

I'm sure a lot of of purists will turn their noses up at this saying it's a gimmick and not a pure signal, etc. Don't forget it's an analog process and not digitized in any way at all. The amount of problems it solves is also a major up side! There have already been dropped jaws at top amp companies and one cable company choosing this over their best cable in a blind test!

I truly think that Iconic Sound might have a game changer here and I hope they succeed. The guitar lead hasn't change in 60 years. Well, maybe it's time for a change! Would I buy one? I'd buy three! Definitely a product I'll be keeping an eye on!