iBassist is much more than a virtual bass for your iPad - it's a fully featured sequencer with advanced MIDI I/O that can make yur basslines follow your songs. Hollin Jones explains...

iBassist for iPad is the latest release from independent developer Luis Martinez aka Lumbeat, who also makes a range of drum-centric apps for iOS. Weighing in at just over 1GB, it comes down much more on the side of a sequencer and pattern designer than a regular virtual bass guitar, although a degree of sound shaping is possible, and there are built in FX too. It includes 10 round robin sampled bass instruments from slap and rock to double bass, and these account for the majority of the app’s file size.

How Low Can You Go? 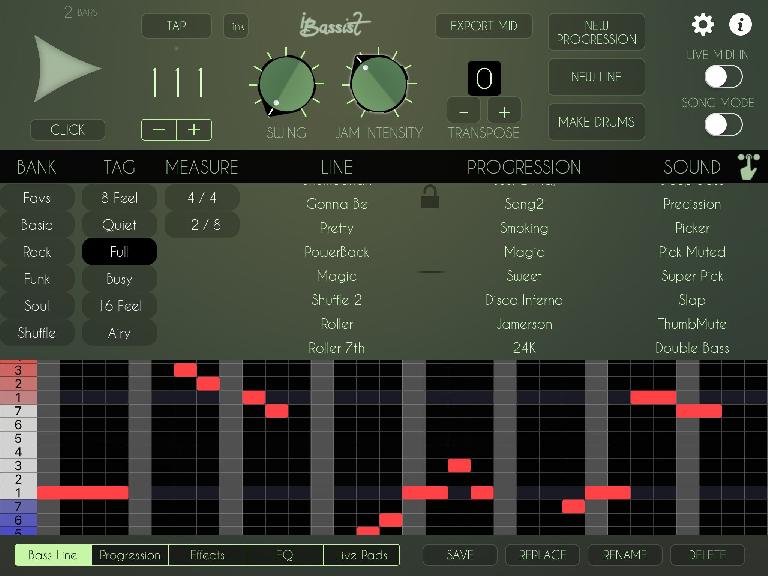 At the heart of iBassist is its main screen which defaults to showing a grid sequencer - here you can enter and edit notes by hand, and of course the app accepts MIDI from external hardware and software sources as well. The middle part of the window (which can have its display altered to show several different sets of controls) has its default view set to pattern and sound selection. Here you can choose bank, tag, measure, bass line, progression and finally the bass sound that is used for playback. Above this section, a main toolbar contains tempo (with tap), swing and jam intensity knobs, transpose and new progression / bassline buttons. 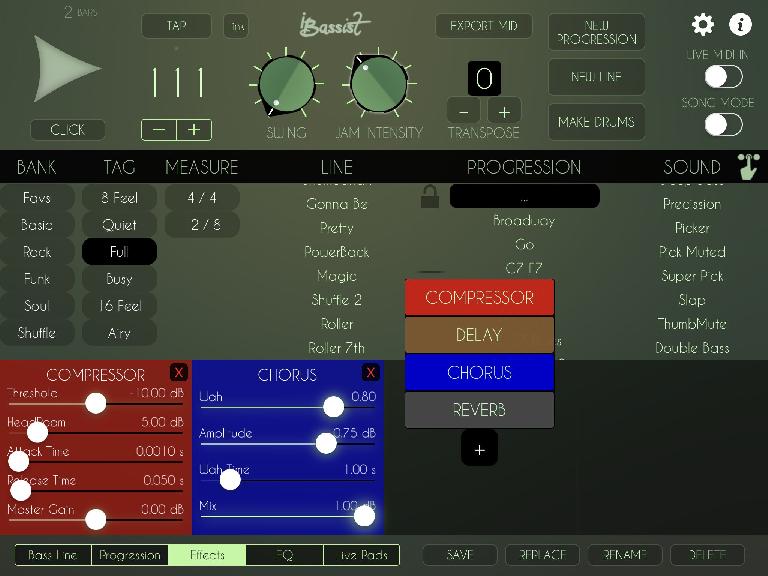 Moving down to the base of the window (no pun intended) you’ll find tabs to switch between different sections. After bass line comes Progression, where you can build a multi-stage bass part complete with record and randomise buttons, an effects section with four slots and four fx choices, a 4-band EQ section and Live Pads, which let you trigger patterns. There’s an expanded Song mode too, where you can build patterns into entire songs. This is all MIDI controllable, and patterns you create in the app can be exported as MIDI files as well. 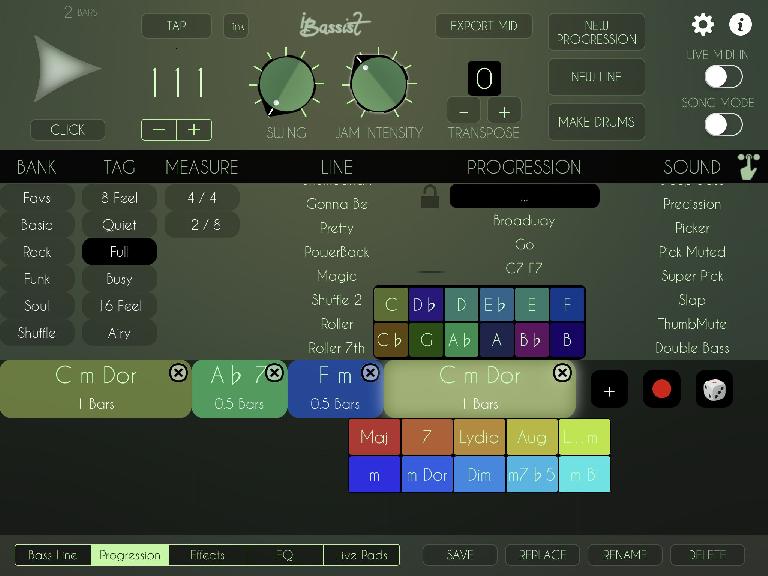 The clever thing that iBassist does is apply chord progressions and changes to your patterns, so you don’t have to manually program every part - you have the option of creating patterns and grooves and then letting the app adapt those automatically to follow root notes and chord sequences. You can also easily change scale types and root notes in the Progression editor to make this process much easier. You can of course save sequences and patches, and the Settings section allows you to assign chord detection to specific MIDI channels, set humanise values for note length and velocity, specify note limits and configure the app’s MIDI output. 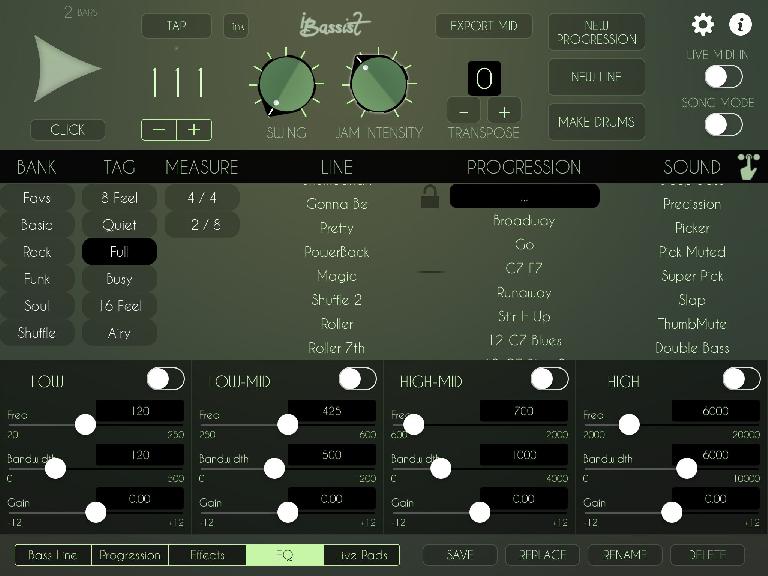 iBassist is a really powerful app that’s much more focused on the art of creating patterns and letting you work with them than some other apps, which tend to focus on the bass or amp sounds in more detail. In fact it’s one of the most comprehensive instrument-specific sequencer apps I’ve seen on iPad, with a whole lot of tools and workflows dedicated to the bass - particularly with regard to the scales, patterns and progressions. 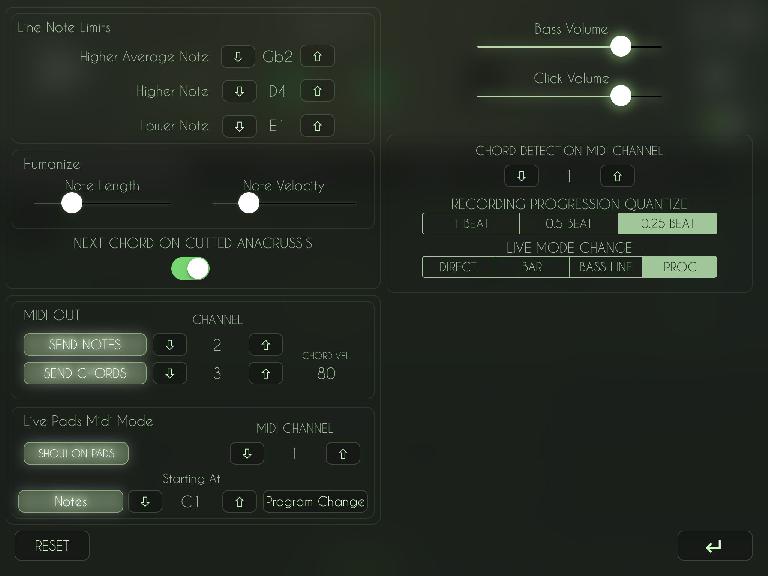 It does take a little learning because programming for electric bass isn’t exactly the same as drums or keys - but there are some good instructions on the website. Graphically it’s a little rudimentary but this doesn’t get in the way of its utility - even if a bit of a polish wouldn’t hurt. The bass sounds are decent though not groundbreaking, but as mentioned the focus here is on programming parts and conforming them to fit chord changes in songs. So you might expect to export the MIDI parts or route MIDI out to other bass instruments, using the native ones more as a guide than as the end product. For programming bass parts in iOS you’ll struggle to find a more comprehensive tool than iBassist.

Cons: Arguably slightly expensive in the ultra-competitive app marketplace. The look is a little basic, if that bothers you. Onboard bass sounds good for guides but you may want to reassign them for your finished tracks.

Learn more about producing and programming on the move: https://ask.audio/academy?nleloc=new-releases