This multi-talented music sequencing and sound shaping environment could be one of the most advanced Kontakt instruments ever made. Hollin Jones explores its many avenues.

Kontakt is far more powerful than many people realise. It's a fully scriptable instrument design environment and for those who have the skill and vision to spend a lot of time creating their own instruments, it offers whole worlds of possibility. Hypernode from Rigid Audio is right out there at the extremes of what I’ve seen done with Kontakt - a fully-featured, modular electronic music arranger and a collection of over 300 Kontakt multi-instruments all bundled into one, 12GB download and running inside Kontakt. (The free Player is supported but with significant restrictions on functionality).

Keeping It In The Family 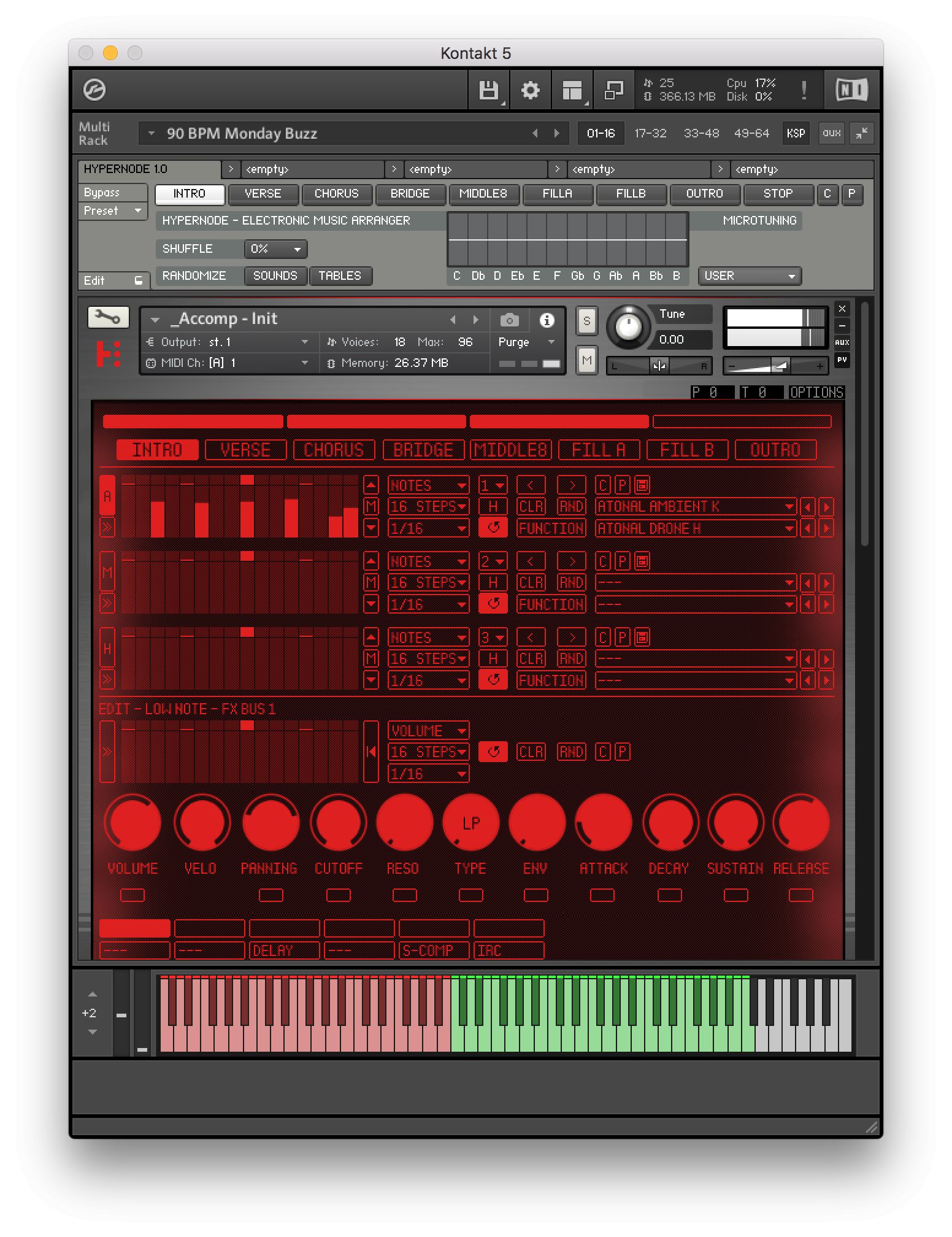 There’s so much to get your head around with this system that you’ll want to do a little reading up before you dive in. It has six modules - bass, kick, percussion, harmony, lead and pad, as well as the Accompaniment module that is where everything gets sequenced and animated - and much more. There are over 600 sounds supplied, from keyboards and guitars through all manner of synths, and mutations between sounds. Each of these can be edited in-depth using the onboard controls, including envelopes, filters and LFOs, and there’s a bunch of effects included as well. 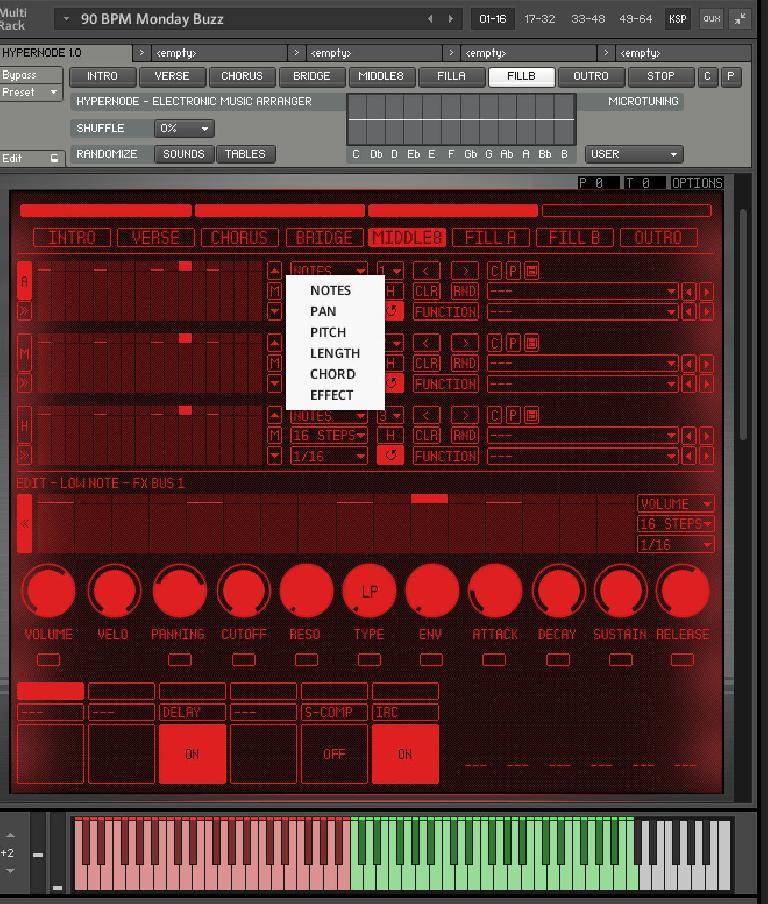 Each instrument has its own sequencer, can be automated and has multiple effect insert slots, while the Accompaniment module has a staggering 64 sequencers, all of which can run at the same time. Each can also run at its own speed and rate with up to 128 steps and also in one-shot mode. 8 patterns can be switched for a total of 512 sequencing tables. The interesting thing about the Accompaniment module is that when you hold more than one note at once, it sorts them from low to high as you played them, and then assigns them to the three note sequencers. So the synchronisation is sorted for you, using the sequences you have played and the notes you hold as instructions. As well as extensive effects, there’s a ton of dropdown menu action so you can assign and change parameters and signals. The modulation section is incredibly comprehensive as well, so there’s much fun to be had controlling one part of the instrument from another. 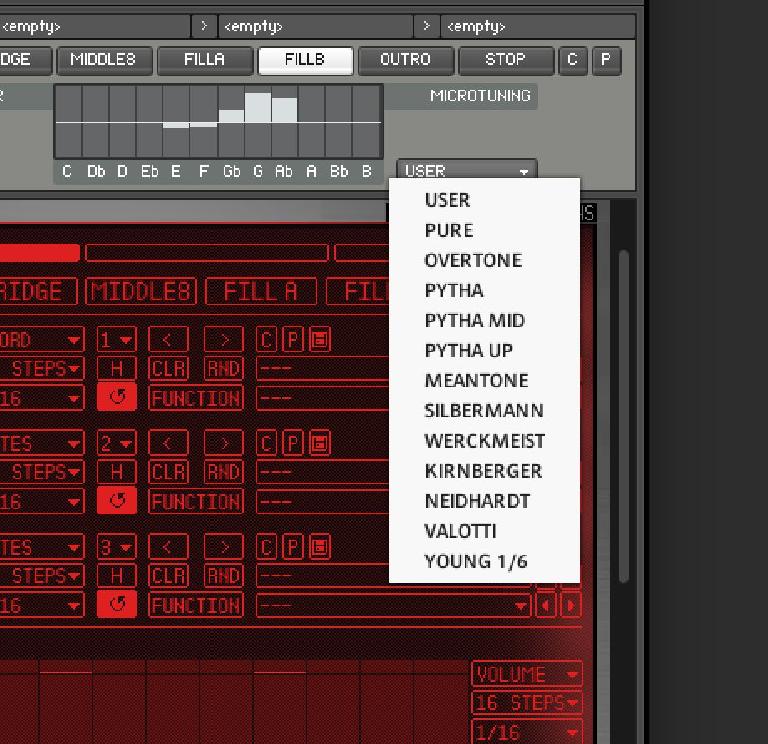 In addition to sound shaping and patch creation, the unusual thing about Hypernode is its ability to let you create not just patterns but also songs inside Kontakt. The arranger section at the top lets you create multiple song sections, each consisting of fully configurable sequencers. You can reassign any instrument using the dropdown menu on a track, and change the way the sequencers operate - chords, panning, pitch and so on - to take full control of what they’re affecting.

This works surprisingly well and is quite old skool in its feel, something that might be deliberate given the retro-style graphics of the interface. Since so many Kontakt instruments use lush graphics, with this one it’s easy to forget you’re actually in Kontakt at all, it feels more like a vintage synth and sequencer. Sonically, it’s very versatile. The sheer number of instruments and multis on offer plus the infinite ways you can shape and program them means it really is mind blowingly flexible. A wide range of sounds are covered from ambient through house, techno, retro and more, and grouped by category. They’re all extremely usable, and fit together very well when layered together - and that’s before you have even started modifying them.

Hypernode is a truly vast instrument with infinite possibilities, and quite an achievement considering it’s all built inside Kontakt. There is a learning curve but it’s not too arduous and when you figure out the lay of the land, you’ll be making all kinds of electronic music without ever leaving Kontakt.

Cons: Moderate learning curve. A dedicated onboard mixer would be nice.

Learn more about Kontakt in the Ask.Audio Academy: https://ask.audio/academy?nleloc=category/audio/application/kontakt